RAF Scousburgh became operational on the 28 Oct 42 as part of the Northern GEE Chain,  GEE being an RAF Navigation System. The other stations in the Chain were at Burifa Hill, near Dunnet Head in Caithness, Windyheads Hill, near Pennan in Aberdeenshire and Sango, Near Durness in Sutherland 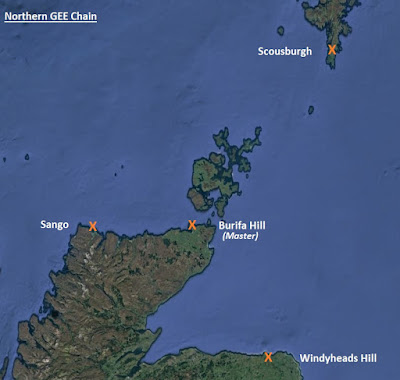 The GEE System entered RAF Service in 1942 and was the first  operational hyperbolic navigation system . It was later followed by systems such as OBOE, LORAN, DECCA NAV etc. It used the time delay between two radio signals to provide a fix. Exact timing was essential within each Chain and the system was accurate to within a few hundred yards at distances over 300 miles, ideal for Bomber and Coastal Commands. Each Chain required a master station, slave stations and a monitor to check signal timings between the sites. In the Northern GEE Chain Burifa Hill was the master and also provided the monitor. Scousburgh, Sango & Windyheads Hill were slave stations.  All GEE unitss were allocated Air Ministry Experimental Station (AMES) numbers in the 7000 series - I believe Scousburgh was also known as AMES 7321.
The operational and technical site was constructed on the Ward of Scousburgh (863'), in the south mainland of Shetland, about 5 miles north of Sumburgh Airfield: 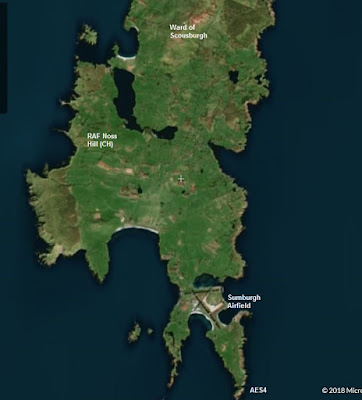 There was no road or track from the base of the hill to the top of the Ward when the location was selected and, therefore, vehicular access had to be provided before the major construction could commence . A metalled road was laid for about three-quarters of a mile up the steep eastern side of the Ward of Scousburgh. 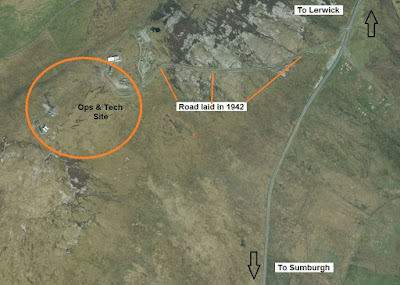 However, the Domestic site was not ready when the Station opened and personnel had to be accommodated at the Chain Home Radar Station at RAF Noss Hill, which was nearly 4 miles away to the south west. The Scousburgh troops would have been housed in a camp which used to occupy the area in the foreground of the following picture (Loch of Spiggie & Ward of Scousburgh in the distance):

The records  for Noss Hill record the fact that the Station began to get overcrowded from Sep 42 when the unit was required to start accommodating the personnel assigned to RAF Scousburgh. In Jan 43 the heaviest Shetland snowfall for years occurred and Scousburgh staff were required to make  watch changeovers on foot in bad weather with deep snow, walking a distance of 4 miles and ascending the 863' hill. I believe that the domestic site for the GEE personnel was ready by Nov/Dec 44 and was occupied by Christmas. Most of the buildings were Nissen Huts and the camp was located to the east of the Ward near the Loch of Clumlie: 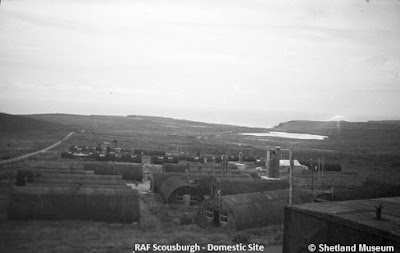 The camp was larger than needed  for the RAF personnel alone as extra accommodation was required to house the Army guard force. The plans called for the site to accommodate approximately 140 RAF servicemen  and about 40 from the Army, there was also space for an unspecified number of NAAFI Staff. Opposite the living quarters and slightly higher up, on the west side of the main road between Sumburgh and Lerwick, a water tank with chlorination facilities was built. A recent satellite image showing some of the foundations left at the Domestic Site: 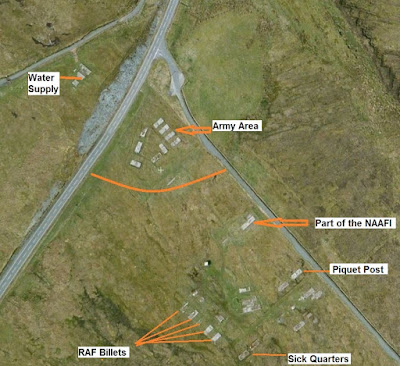 The Operational/Tech Site  could be seen from a long distance because of the construction of two massive 350' steel towers for the main and reserve  transmitters and two 90' wooden towers for the Receivers. The next picture also belongs to the Shetland Museum and was taken at a place called Robins Brae, about two miles south of the Ward. The large transmitter towers can be seen clearly and the two receiver towers are just to the right of the left-hand 350' tower: 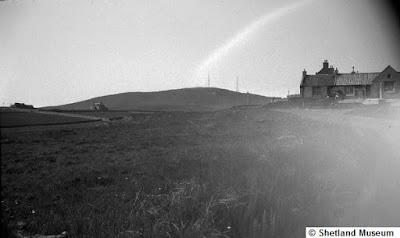 The towers can also be seen in this photo below, also from the Shetland Museum. The steel towers are at the left of the picture and the two wooden towers can just be made out to their right: 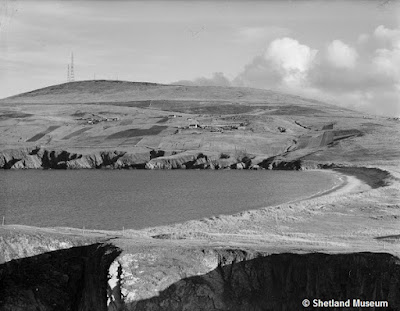 The base of one of350' Towers can still be seen, the other has been obliterated by a more recent vehicle turning/parking  area:

The bases of the 2 x 90' Receiver Towers were slightly higher up the hill and can still be found. One of them is illustrated below: 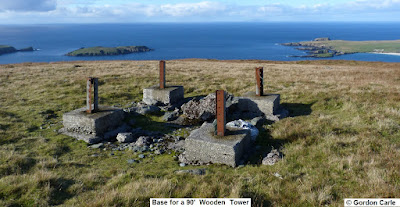 Each of the 4 Towers had a hut to house the equipment and the personnel associated with it. The huts are long gone but they were surrounded by blast walls and two of these structures remain, one for a Transmitter and one for a Receiver. Photos of both follow:

The foundations of the second Receiver Hut can also be seen but there is little to see of the blast walls: 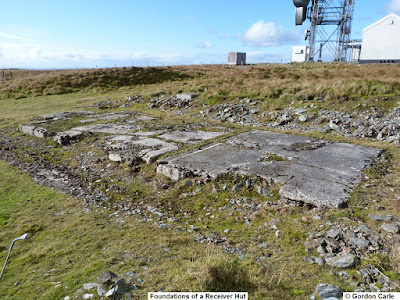 The main power supply came from generators in a Power House, which was situated between the two 350' Transmitter Towers. However, I have been unable find any trace of it during visits to the site. An uninterrupted power supply was considered essential for GEE stations and Scousburgh was provided with a Standby Power House (often known as a Standby Set). At Scousburgh the standby generation equipment would have been in a hut, surrounded by blast walls. The blast walls (repaired)  were still standing  in 2015:

On revisiting the site in 2018 it was apparent that the blast walls and foundations had been demolished: 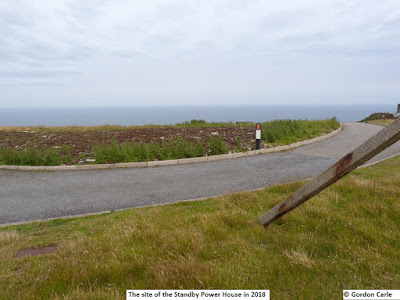 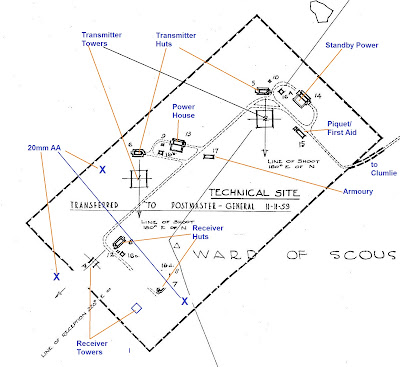 Although Scousburgh was an operational unit, its function was to provide navigational assistance, not to detect enemy aircraft or to launch missions against German assets. Life on the station was governed by the need to ensure electronic transmissions were continuous but this does not result in a particularly exciting and eventful history! A few of the more interesting details are recorded in the paragraphs which follow.

In Nov 43 defence courses began to be run for all personnel, with instruction being given by members of No. 2801 Sqn RAF Regt. From the end of February into the beginning of March 44  the main array feeder runs were renewed - 600lb of copper wire (a scarce but vital commodity at the time), was used in the process
In Apr 44 the Commanding Officers  at each of the Northern GEE Chain units were instructed to ensure that "before marching-out" the RAF Regt personnel at each unit were to  dismount  the Hispano cannon and twin Browning machine guns (together with their mountings) and store them in the Station Armouries, in case they were needed for future use. There were 3 emplacements for 20mm cannon and they are still visible today. The records indicate that the weapons were  Hispano Suiza but, from the remains of their positions, another expert has suggested that they may have been Oerlikon 20mm guns. The emplacements looked like this: 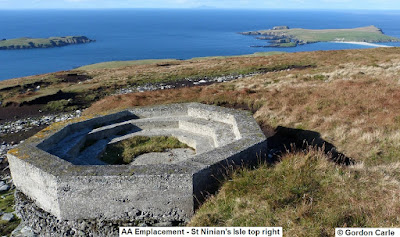 The Twin Browning would have been .303" calibre, about 8mm, smaller and more mobile than the 20mm cannon - I have not found the remains of any of their positions. The Browning guns could have been planned for use as ground defence weapons rather than as anti-aircraft defences.
I believe that the debris in the foreground of the next photo may show some of the remains of the wartime Piquet Post (which was also equipped as a First Aid Hut), just inside the entrance to the site: 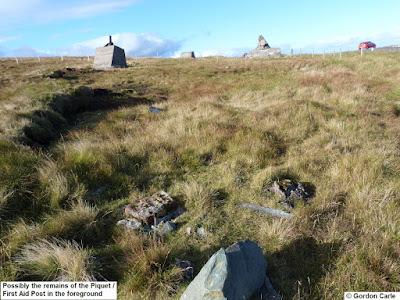