Stewart & Gisela Dorward arrived at Saxa in September 1982. This was Stewart's second tour on the Station, having completed his first stint as a controller in 1969 & 70. On this occasion he was posted in to take over from John France as CO, (left click on images to enlarge) : 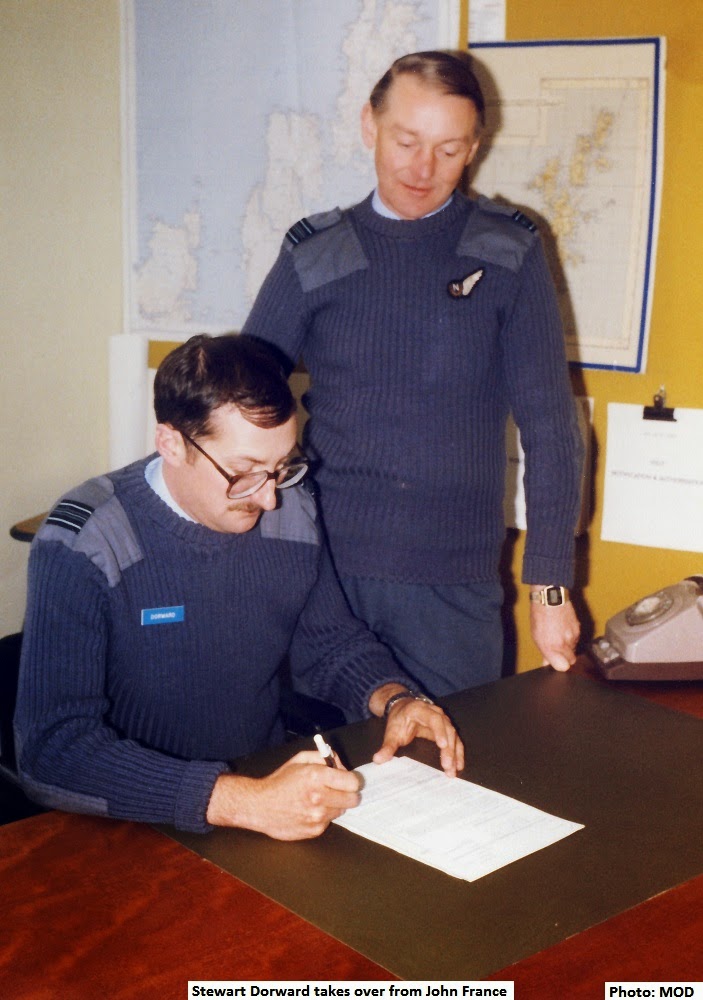 ﻿They  appear to have  had a busy tour, getting involved in charity events, functions, expeditions and looking after their 3 children , Karen, Christopher and Caroline, (not to mention the odd exercise/TACEVAL etc): 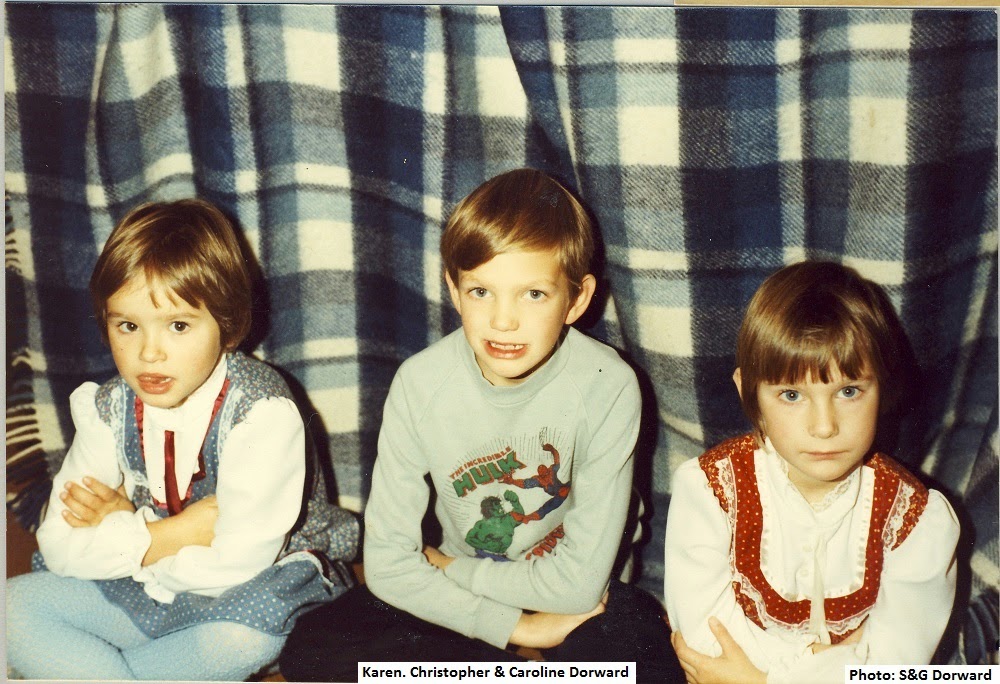 The children attended Haroldswick Primary School, not far from the camp. The next two photos are from the School Sports Day in 1983: 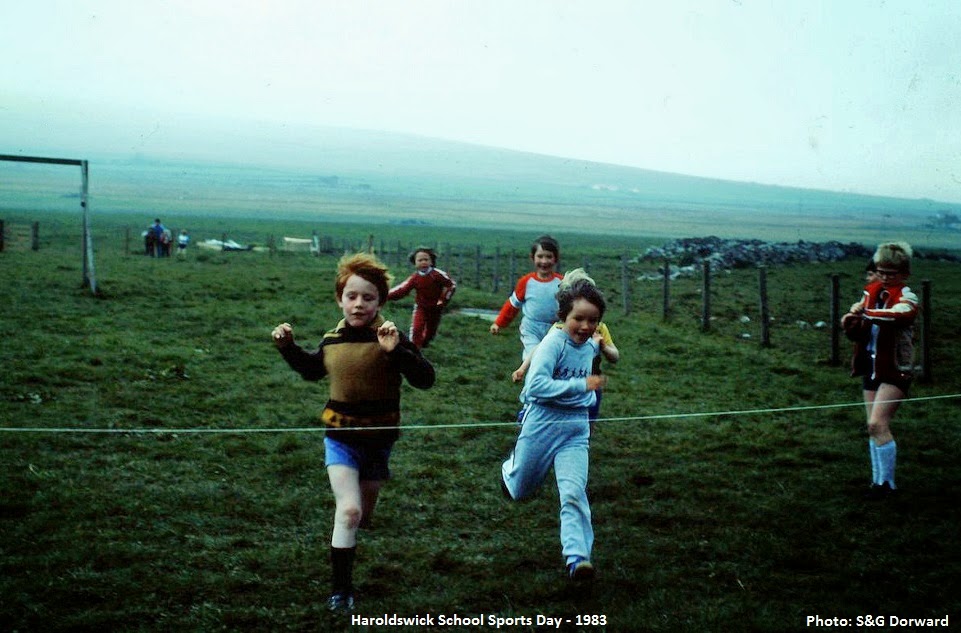 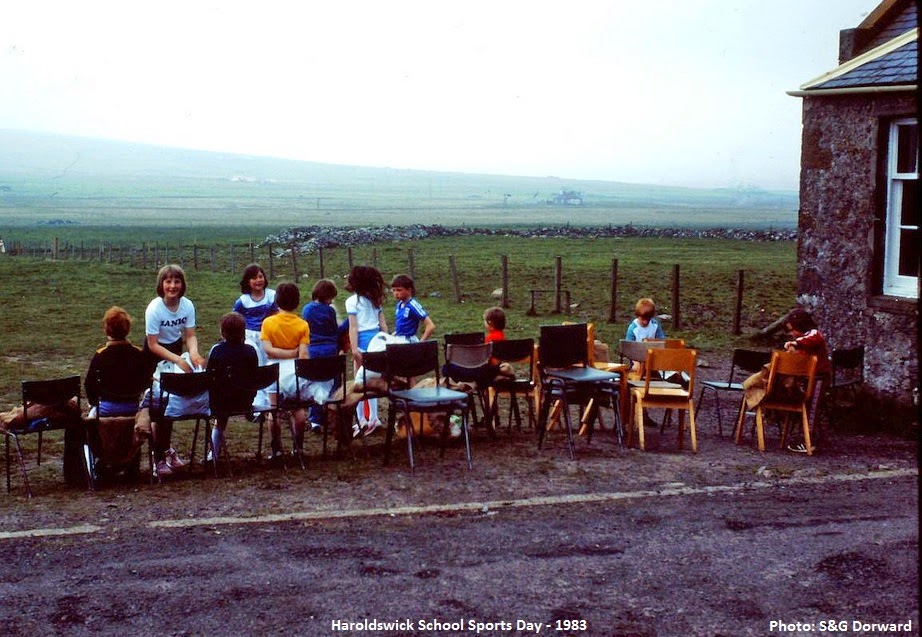 When the school was closed there was always time to have a couple of friends round: 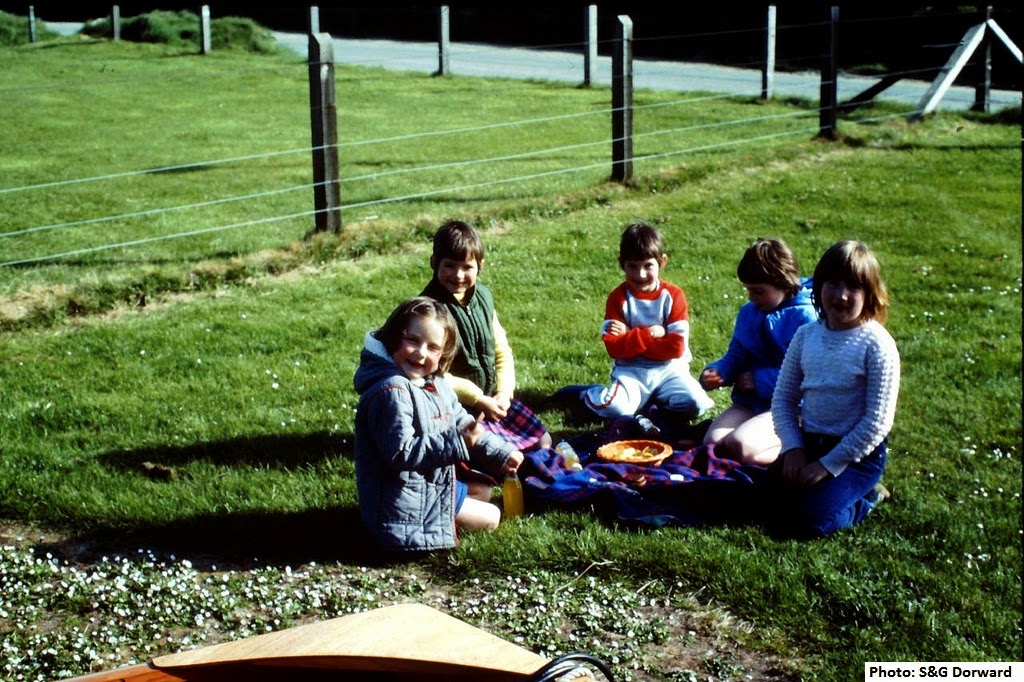 Boxing Day is often the time for feeding on the Christmas leftovers, but not in the Shetlands. With the wonderful climate it's obviously the time to have an al fresco barbeque: 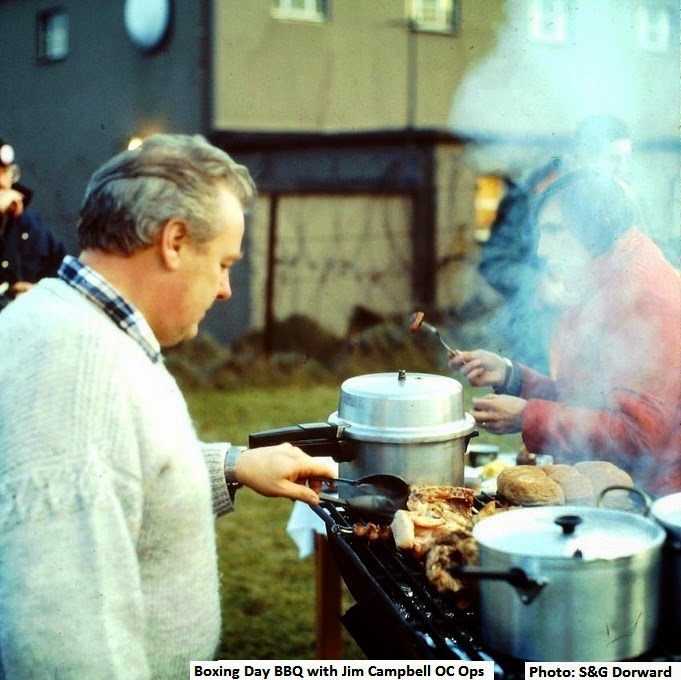 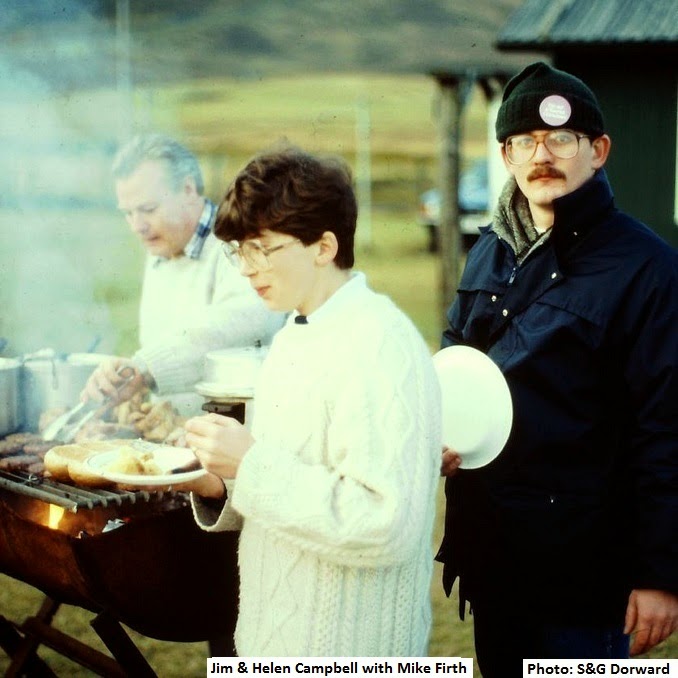 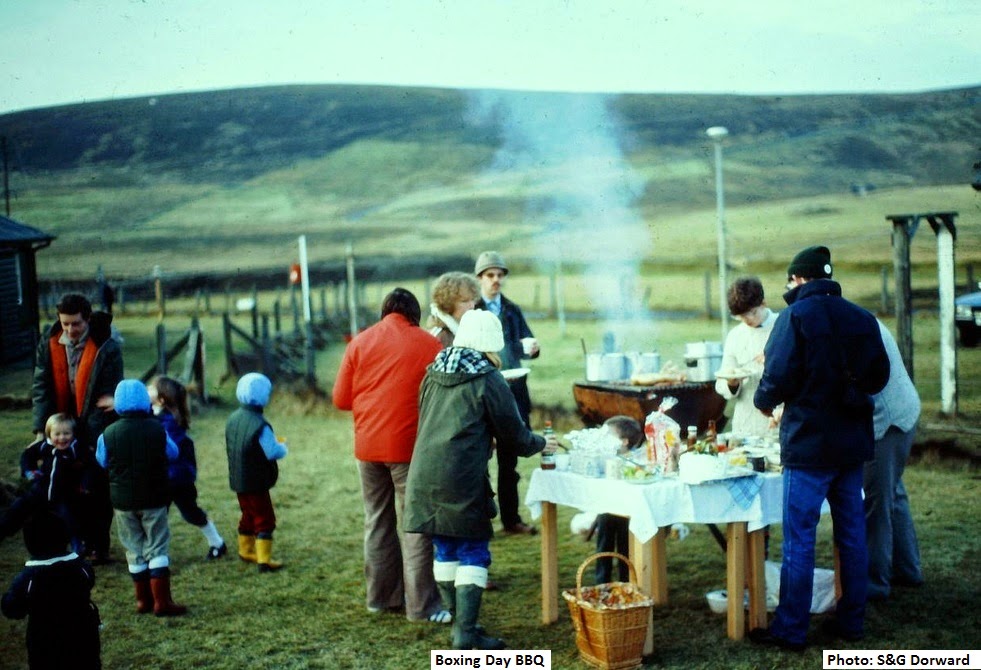 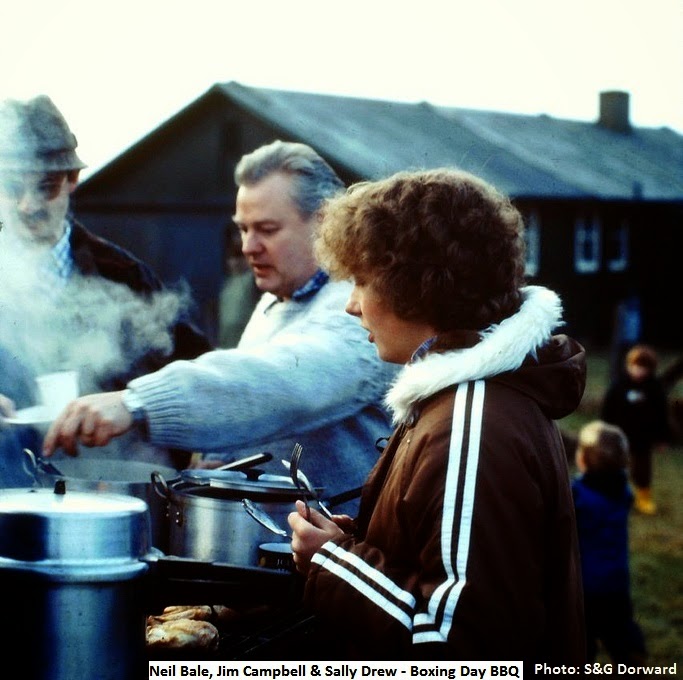 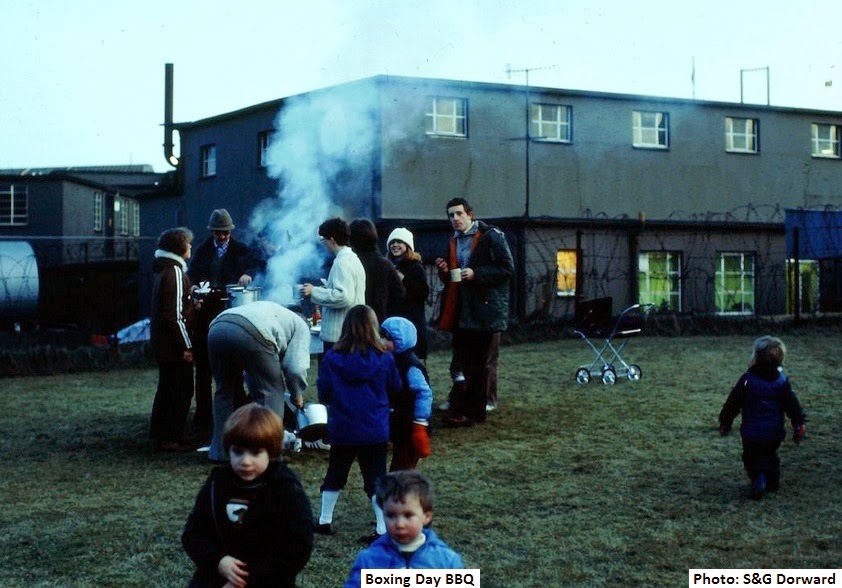 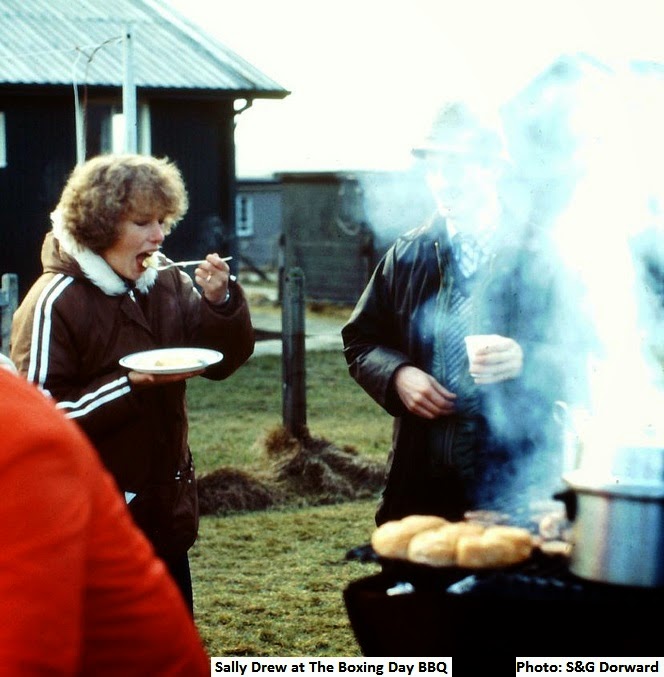 There was time for a charity football match at Burrafirth: 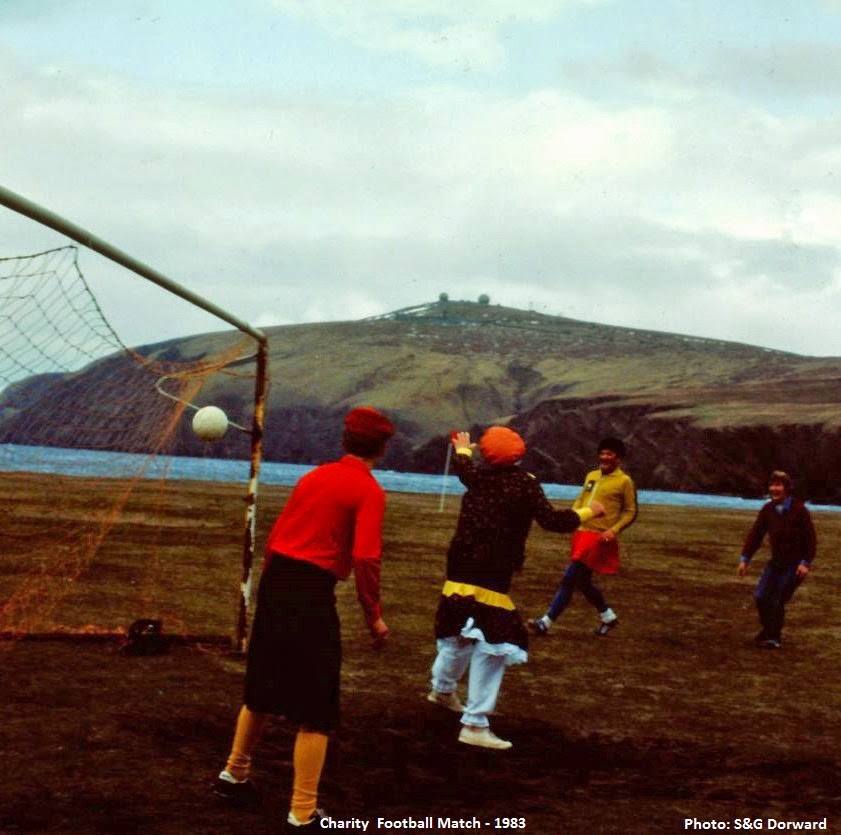 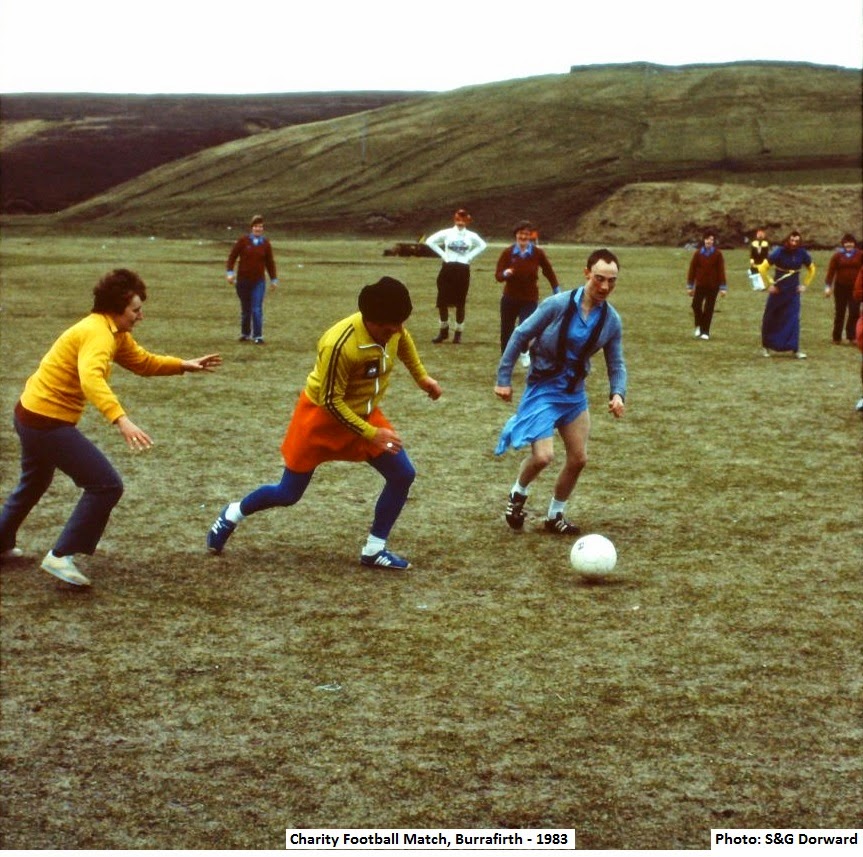 and a tug of war by the camp: 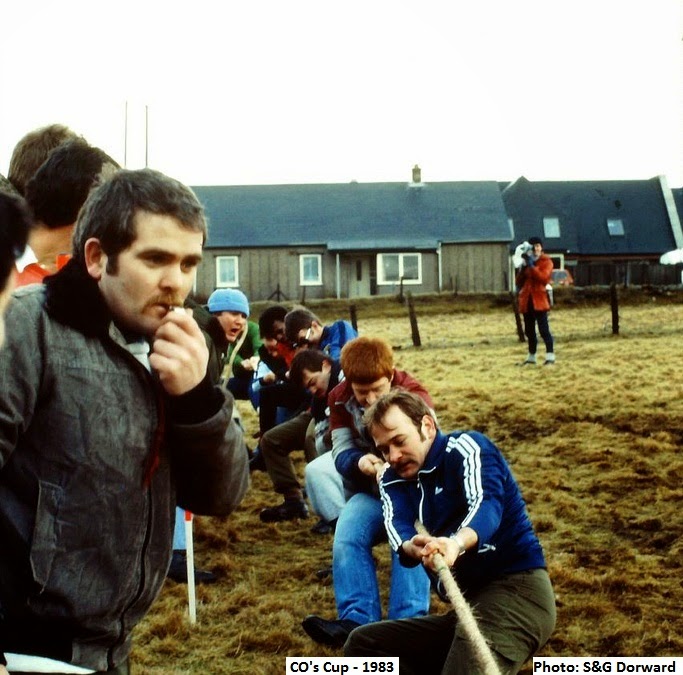 The next photo was taken at the Loch of Cliff and shows Saxa with the domes of the HF200 and S649. The Type 80 dome has gone and work on the Type 93 won't start for about 6 years. The Ace High microwave tower is still in situ, whilst the Satcom dome and Links towers are also some time in the future.  The large gulley on the right, in what is known as the Lee of Saxavord (one word), was important in the early 60's as the access route to Burrafirth for US Navy submarine cables. 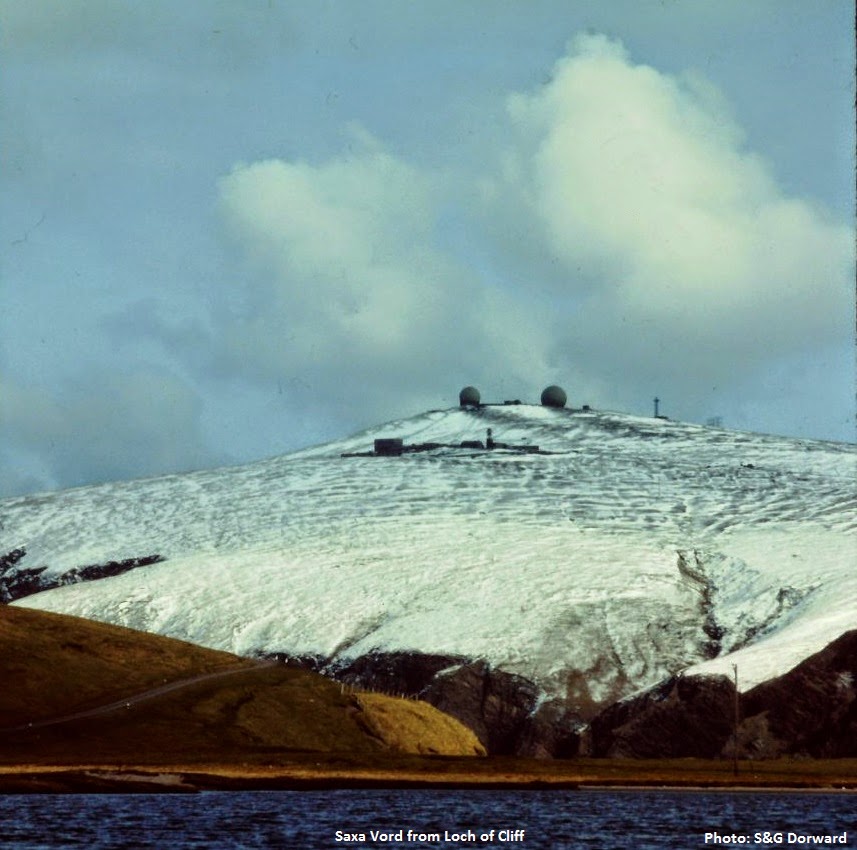 Stewart built the Mirror dinghy in the next picture, in the garage of the CO's MQ. On almost their first trip out on the Loch of Cliff they managed to turn it over and had to swim for it. The story was all round the island by the same evening: 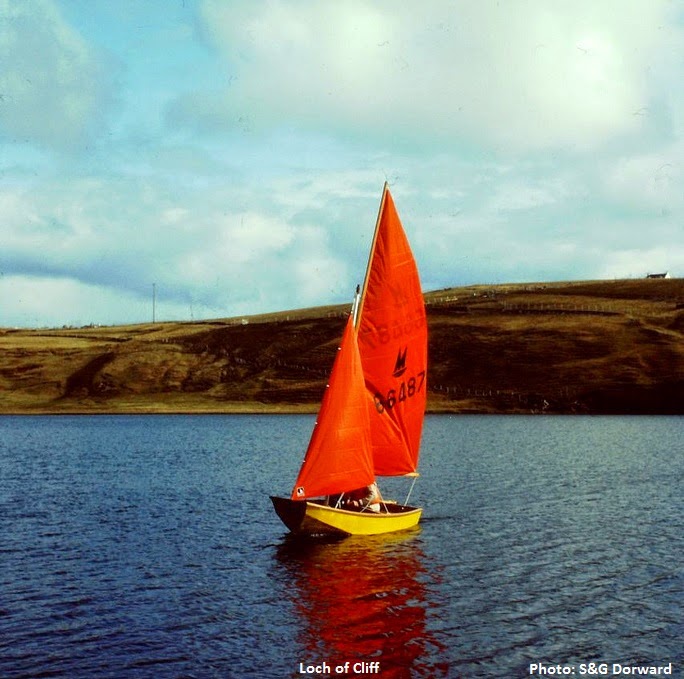 My late father-in-law, Hughie McMeechan, used to have fun acting as an auctioneer at charity events. I believe  the next picture shows him in that capacity in the NAAFI: 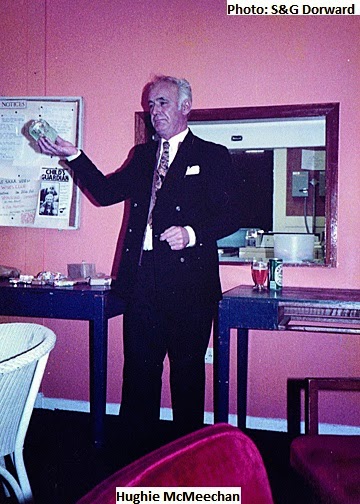 In 1983 Stewart went on a Station expedition to Arisdale in the south of Yell to visit the crash site of Z2148, an RAF Catalina from 240 Sqn. The aircraft crashed in the early hours of 19 January 1942, killing seven of the ten crew members. The wreckage was spread over a wide area and much of it remains after more than 70 years. This short article appeared in the station magazine, The Arctic Circular", a short time later : 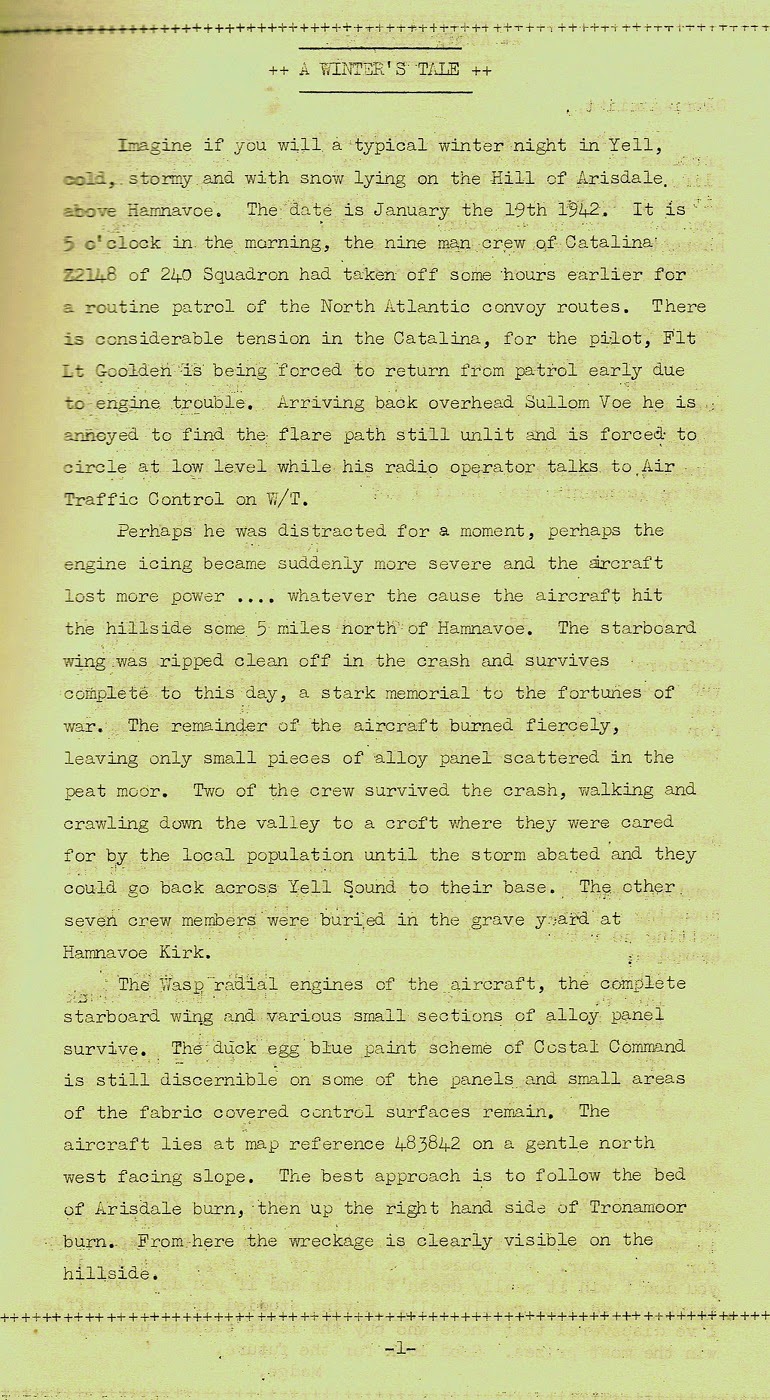 More details of the accident can be read here: http://www.crashsiteorkney.com/page42.htm
In 1991 the then CO, Sqn Ldr Nick "Flash" Gordon, led a contingent of Saxa personnel at a memorial service on the site. This article appeared in the Shetland Times dated 30 August 1991: 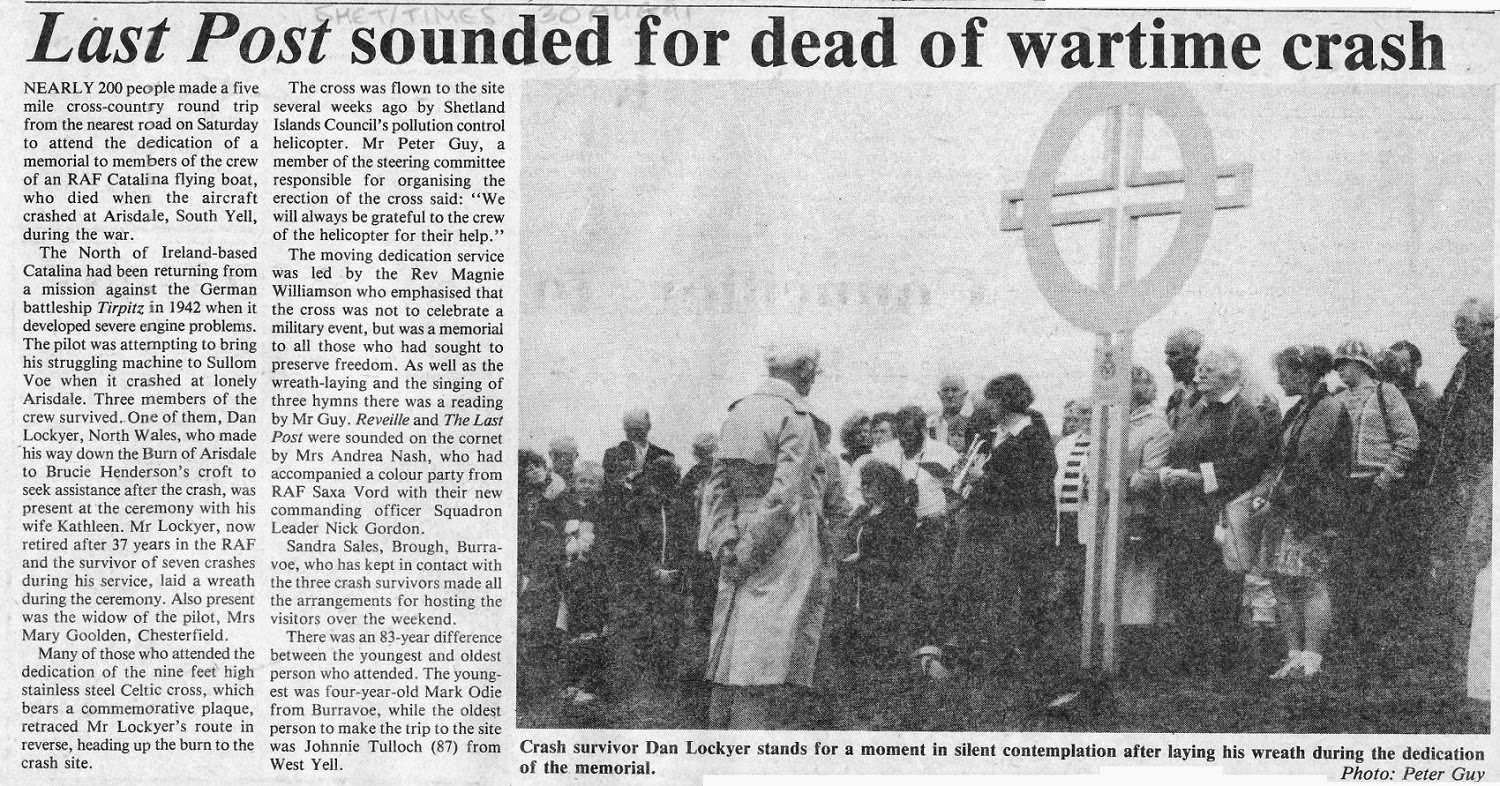 The next 2 photos were taken by Stewart from the water tower by Station Sick Quarters. The first shows the domestic site at an early stage of the rebuild, It was to be about 8 more years before the work was complete. 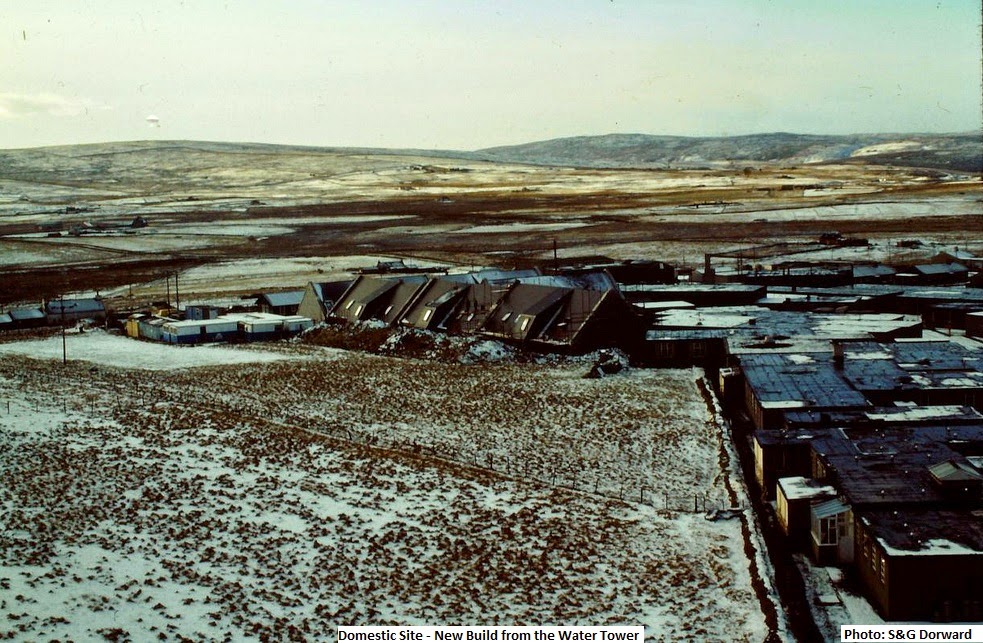 The second was taken looking towards Norwick and Lambaness, the WWII site of RAF Skaw. 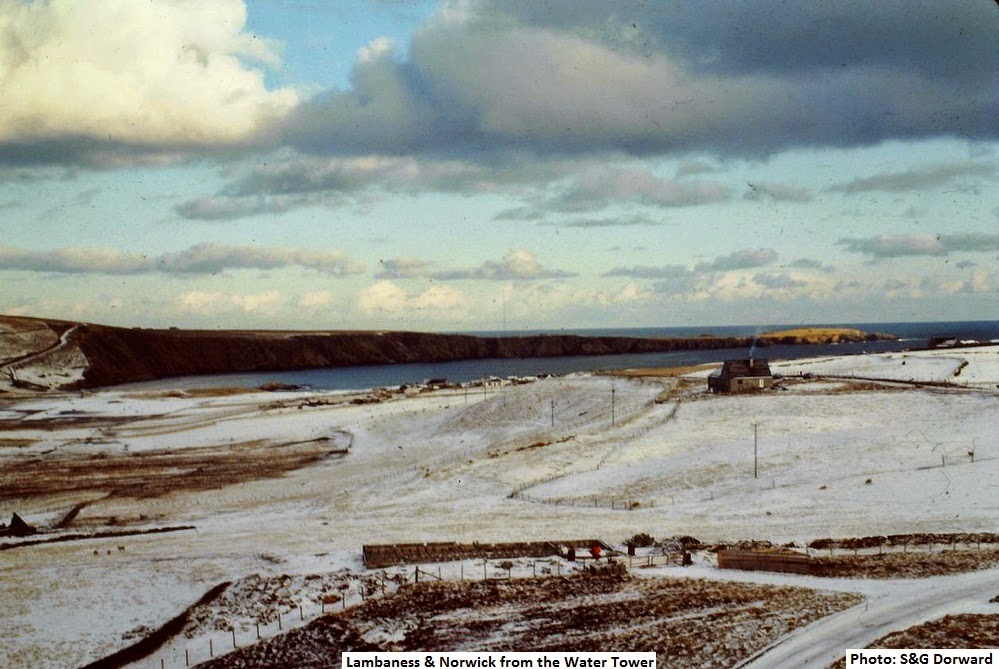 There was even a little time for a social life, illustrated by this photo from the Summer Ball in the Officers' Mess in 1983: 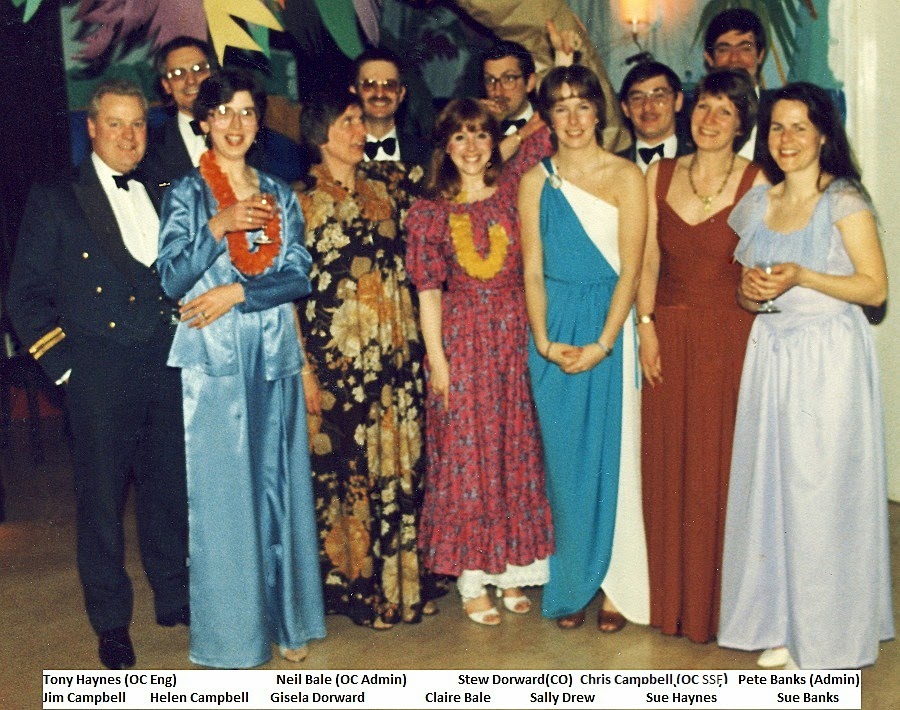 The final photo in this section shows a sight familiar to all service families who were based at Saxa Vord during the last 35 years of the station, a Shetland Islands ferry at Belmont on Bluemull Sound. In this picture it is the MV Kjella unloading passengers and vehicles on to the pier at the south end of Unst. 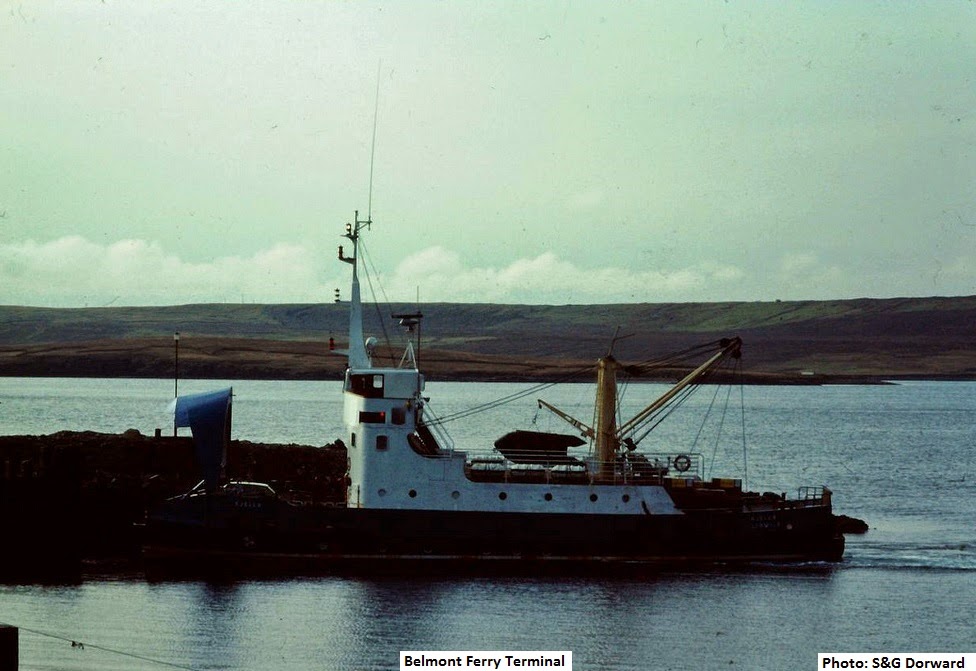 Stewart & Gisela left Saxa in February 1984 after what appears to have been a very interesting and successful tour.  As a thank you from a grateful RAF, Stewart was posted from Saxa to the Falklands as first CO of 7 SU at Byron Heights. Nice to see some poster at Barnwood had a sense of humour!
I am grateful to them for allowing me to share their photos. A few of their pictures of a raft race at Norwick, were released in an earlier section here: http://ahistoryofrafsaxavord.blogspot.co.uk/2013/11/midsummer-madness.html

Posted by Gordon Carle at 21:44 No comments: