The Red Star Board

Throughout the cold war there were occasions when Soviet aircraft entered the United Kingdom Air Defence Region. These aircraft had a variety of missions - some were en route to Cuba or Angola, some were practicing with their own naval forces, some were gathering elint and others were practicing offensive missions against NATO forces (including radar sites). It was policy for NATO forces to prove that these aircraft movements could be intercepted should there be a need to do so.

The Norwegian Air Force would normally provide information on outbound aircraft coming round the North Cape of Norway and sometimes the Norwegian Air Force would intercept them. The USAF were based in Keflavik, Iceland. In the mid sixties they were operating EC121 AEW aicraft (based on the Super Constellation) and F102 Delta Dagger Fighters. I always thought it was rather brave for their fighter pilots to be operating single-engined fighters hundreds of miles out into the North Atlantic in all seasons. Eventually the F102's were replaced by F4 Phantoms.

Between Iceland and the UK was the High Powered Reporting Post, manned by Danish Personnel, on the Faeroes. Occasionally they would be given control of RAF or USAF aircraft.

The UK Forces included  early Lightnings, which couldn't go very far, later there were Lightnings with longer range - which was extended still further with Victor Tankers. 8 Sqn was reformed in 1972, this time equipped with the "new" Shackleton AEW Mk2's. Despite equipment serviceability problems and slow speed the Shackletons were a valuable gap filler. Later on F4 Phantoms, Tornadoes, E3 Sentries and later tankers - VC10, Tristar - were introduced. All of these assets were at some stage controlled by ground radars and, because of it's location, Saxa Vord was far more heavily involved than all the other UK sites.

Very early on in these operations it was decided to recognise the first intercept of each Soviet intrusion by awarding the contoller involved a "Red Star Tie" and by recording his name on the "Red Star Board". The red star was chosen because of the insignia painted on the tail of Soviet aircraft. At the start I believe the Red Star Board looked like the board one would find in Station Headquarters on most RAF Stations listing present and past CO's. It would have been made of wood and details inscribed with gilt lettering. Over the years, as numbers of intercepts grew, this must have become impractical. The Board must have been updated and replaced on more than one occasion. The final board contains 19 A4 sheets of typed data and it is that data which is shown below. My apologies for the poor quality but the information had faded in places and it was difficult to get clear pictures through thick perspex. 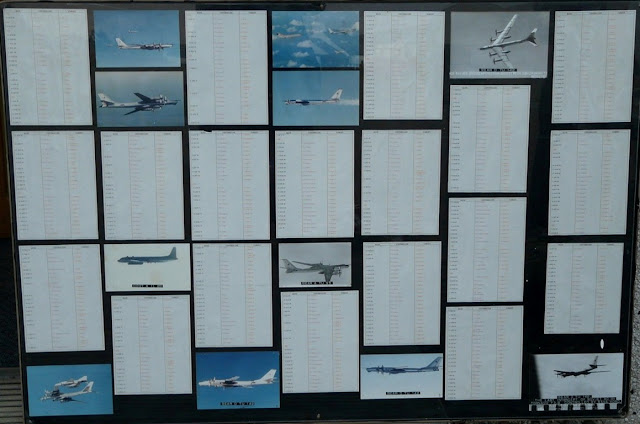 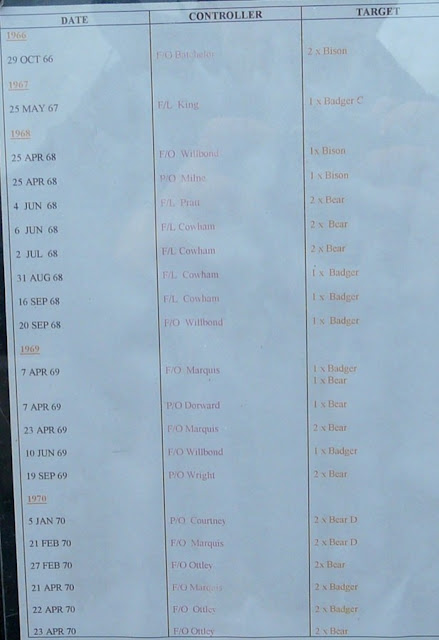 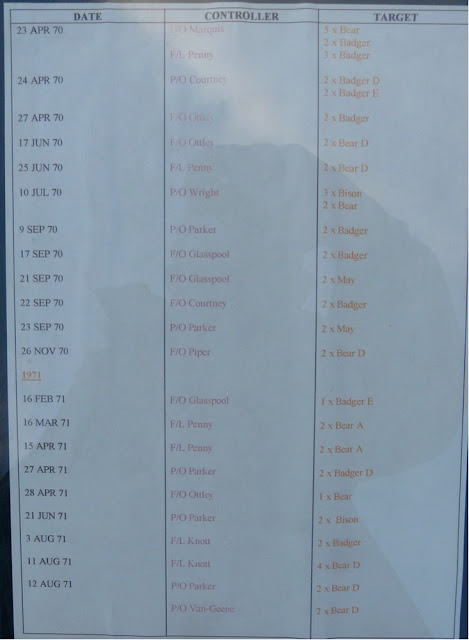 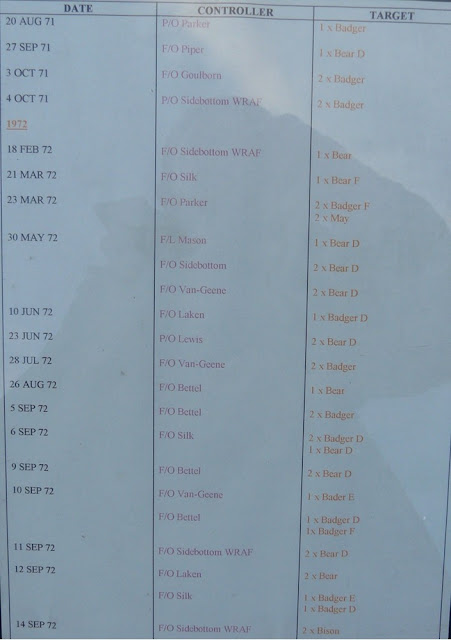 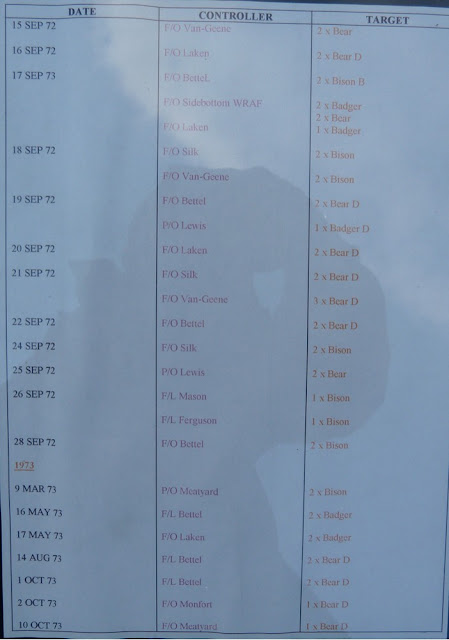 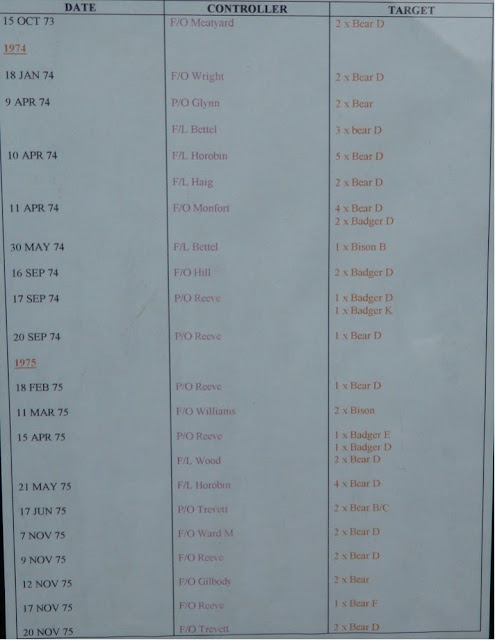 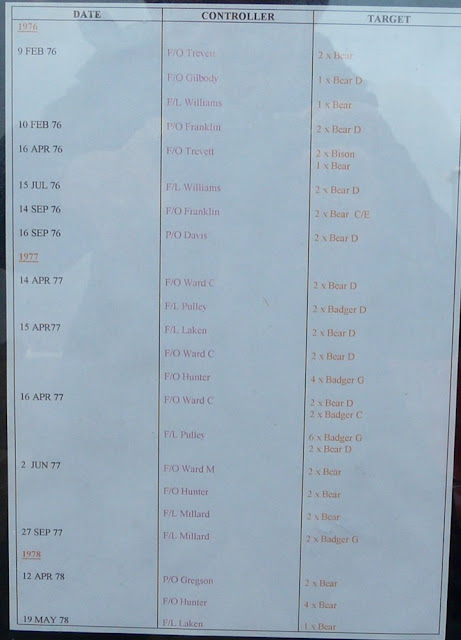 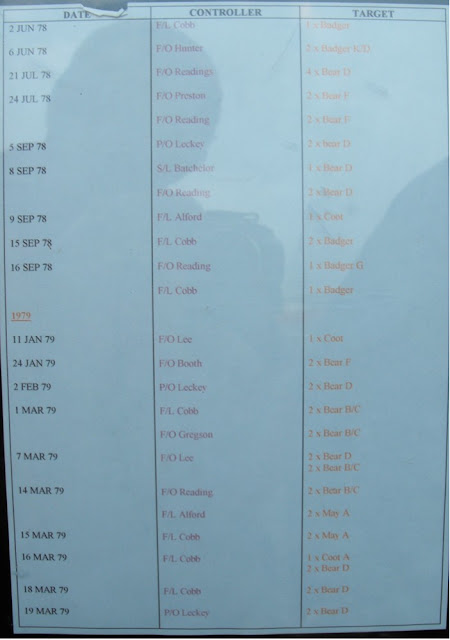 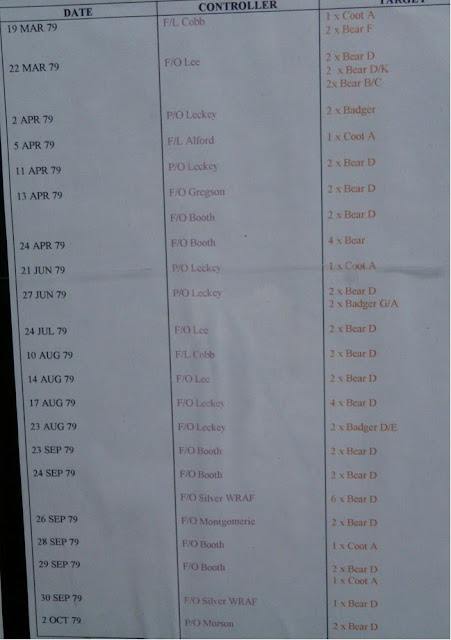 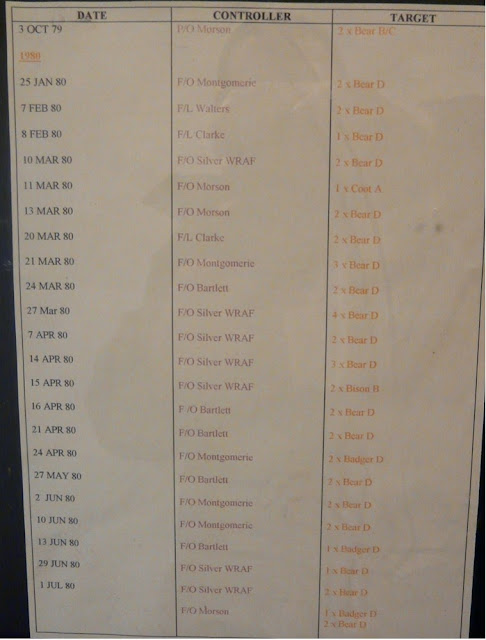 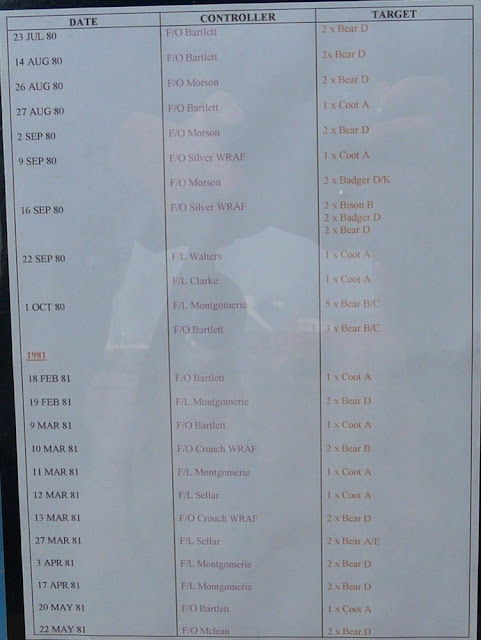 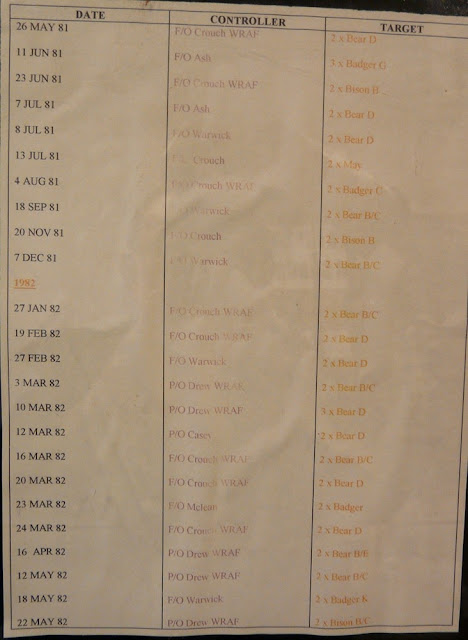 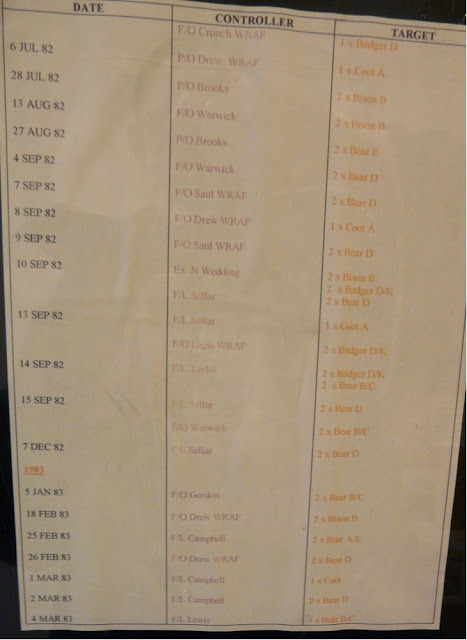 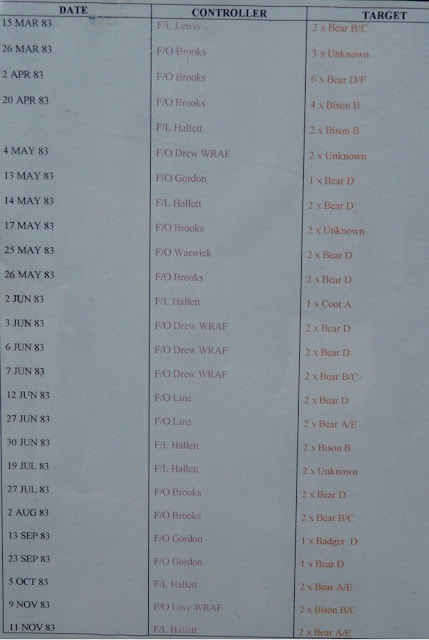 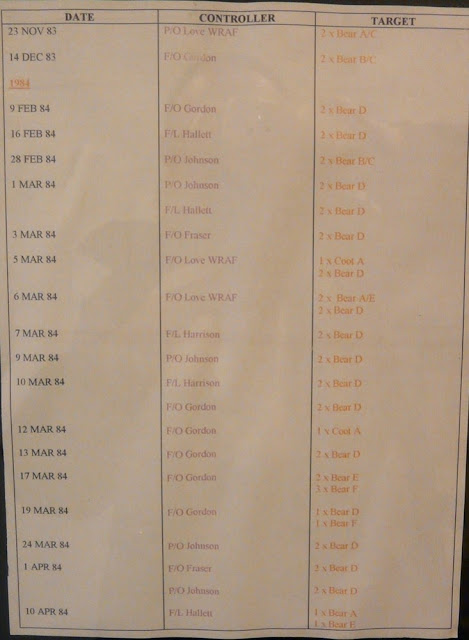 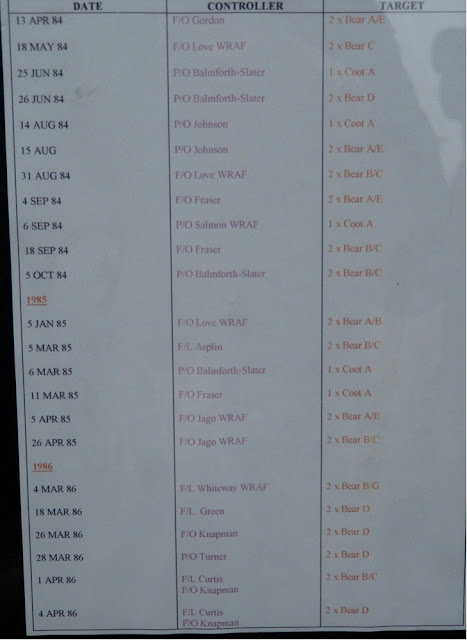 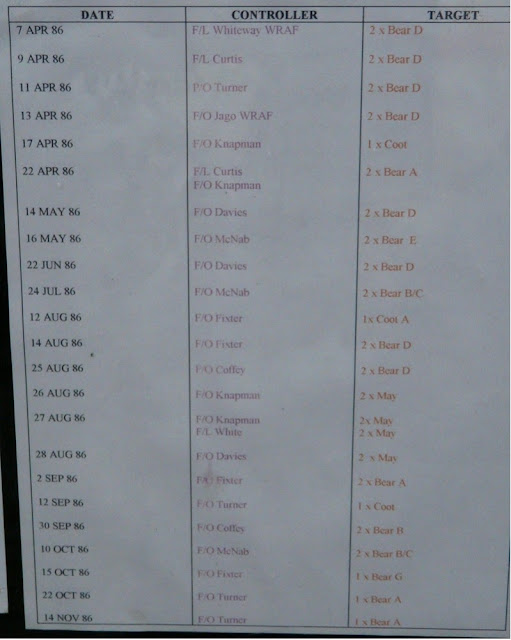 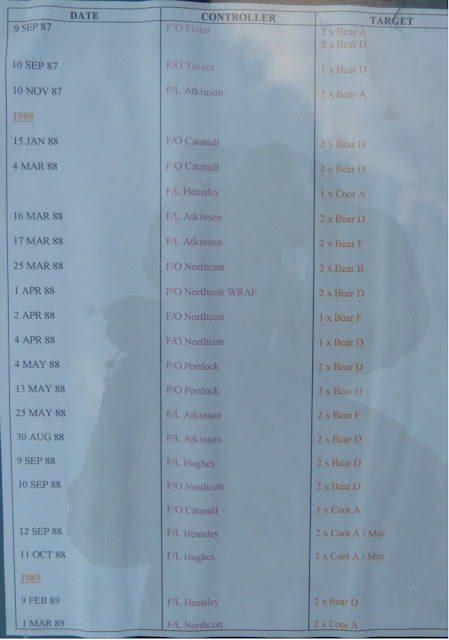 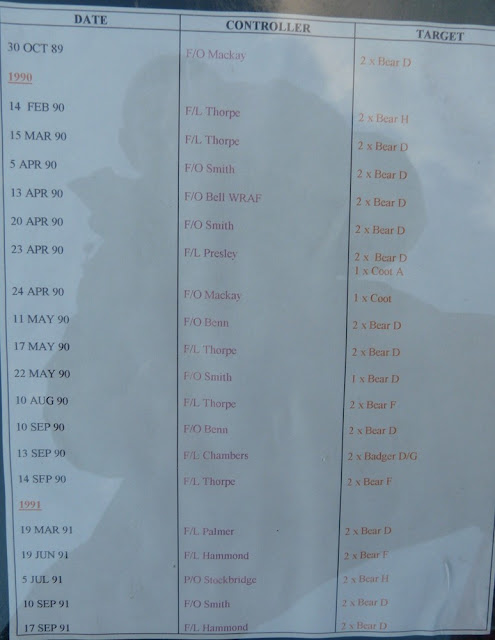 Red Star Tie
The Red Star Tie obviously featured a red star. It was on black background and fronted by a portcullis.
The portcullis was a feature of the crest of Fighter Command which commanded all the UK Air Defence Radar Stations until 1968, at which point command transferred to Strike Command. A portcullis was symbolic as a medieval defensive feature. 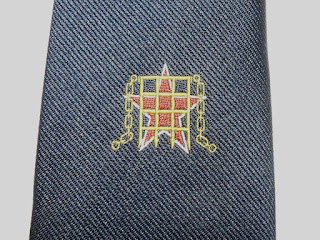