I would like to thank Peter A Barnes for allowing me to reprint the very interesting anecdotes which follow. They appeared on the website for members of Trade Group 12 - http://www.airdefop.co.uk

I am also grateful that he has given me permission to use 4 photos which he took during the first winter after Saxa became operational (57/58). (Left click on pictures to enlarge).

“I was among the first contingent of ops personnel to be posted to Saxa Vord, when it was commissioned in 1957. We sailed from Aberdeen and many of those, who had previously commented about it being calm, were hanging over the rails being sick shortly afterwards, as we passed Peterhead! I and another airman were the only ones to go to supper that evening and it was a bit disconcerting having to chase your plate, as it slid across the table. I managed to wedge myself in my bunk that night and got a good night’s sleep, but K. Barry Ayto, who became one of our watch corporals, spent all night huddled up on the deck. The following morning, we disembarked at Lerwick and took an inter-island ferry, which took most of the day to reach Baltasound.
It must have been late October when we arrived, but the days were still very long, with it never getting really dark, but it was not long before winter set in and daylight was limited to a couple of hours either side of midday. Our C.O. was Squadron Leader Millar and our watch officer was Flying Officer Green, our sergeant a Greek Cypriot, Corporals Ayto & Whyte and the only airmen I can recall were Ron Price, Geoff Lawrence and Jimmy Carlisle. 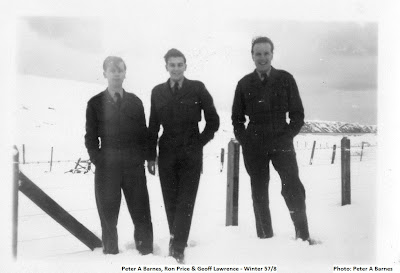 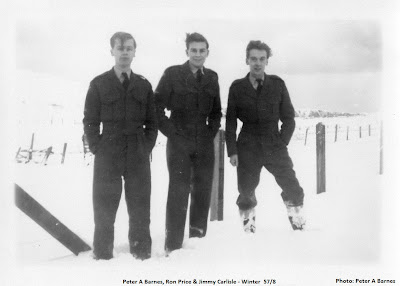 The unit was equipped with a Type 80 radar and there was a rumour that the first aerial installed was blown into the sea, but I believe it may have been dislodged from its bearings: sometimes when there were strong gusts of wind, you could see the trace judder on the console screen. Gusts of over 173 mph were recorded at Muckle Flugga lighthouse on 1st January 1992 (before the equipment broke). In 1967 a wind of 177 mph was recorded at the radar dome on top of Saxa Vord – again just before the equipment was blown away.
The Cold War was yet to hot up and we spent most of our time intercepting U.S. bombers flying down from the North Pole and either straying off course or failing to file a flight plan.. F.O. Green would scramble two Hunters from R.A.F Leuchars (it may have been Dyce) to intercept - I understand that nowadays a junior officer would not have the authority and have to refer up the chain of command.

The road up to the radar site became impassable vehicles to due to heavy snowfall and it was decided that each watch would spend 48 hours on the site. 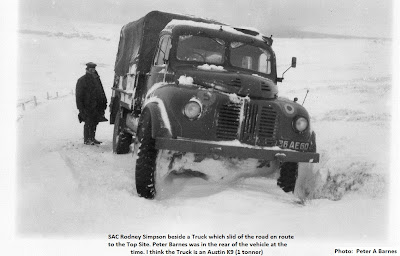 We were issued with wellington boots (in my case two different sizes) and duffle coats and we went part way in a lorry and then walked up to the site. F.O. Green stated that we would take it in turns to cook, including himself (beans on toast, it transpired) and the RAF policeman, who said that he could not leave the guardroom, but he was told that an airman would relieve him, so that he could undertake his cooking duties! If I remember correctly, we slept as well as we could on rubber insulating mats on the floor of the equipment room. I think that we only had one 48 hour shift, so the extreme conditions lasted for less than a week.

On Christmas Day I wanted to telephone my mother and, as it was before the days of mobile phones, I had to use the red Post Office telephone box outside the camp, being the only telephone available for airmen. I duly picked up the handset and asked the operator to connect me and put my money in the box, pressed button A and the line went dead and, pressing button B failed to retrieve my money. I had no option but to tramp through the snow all the way the telephone exchange located in a croft at Haroldswick. When I arrived I tapped on the window and the lady said that she was expecting me and to go it the adjacent telephone box and she connected me without further charge, so I probably had a longer call than I originally paid for.
I was posted out to Cyprus after just a few months and my departure from the Shetlands was not without its moments. When I arrived at Baltasound, I found the ferry anchored in the bay as it was too rough to berth. I was taken out to it in a motor-boat and as it rose and fell alongside, I handed over my kitbag etc. Then the next time the motor boat rose level to the deck I was told to jump and I was caught by two seamen - good job they got their timing right, otherwise, I would not be here now! We could not sail for about 24 hours and I was provided with a cabin and meals for free. When, we eventually arrived in Lerwick, I managed to cadge a flight in an Anson from Sumburgh Head – I cannot remember how I arranged it or the reason for it being there, but one of the passengers was a squadron leader, so presumably he had been on official visit: he may well have been the only other passenger and I felt that he was a slightly nervous flyer. It was my first flight in an aircraft :we bounced down the runway a few times before getting airborne and instead of making a gradual approach into our destination an RAF airfield near Newcastle the pilot spiralled in, so I was looking down the wing at the sharp peaks of the Cheviots below. I caught a bus into Newcastle and then a train to Kings Cross-hauled by an A4 pacific (if I remember correctly “Union of South Africa”)

Apart from the sometimes extreme weather, I did not consider Saxa Vord to be a hard posting. The accommodation, food and facilities were the height of luxury compared to those at Cape Greco in Cyprus and, as far as I am aware, the local population didn’t want to kill you! My only bad experience was being subject to an insidious form of bullying from one of our watch corporals (not Cpl Ayto), who took every opportunity to belittle me. Unfortunately the two corporals shared our barrack room, so there was no respite and I was aware that he would not hesitate to pull rank. Apart from the general bullying, which everybody was subject to, at square bashing, which had a purpose, it was the only time in my 3 years that I was not treated with respect from the most senior officer downwards.

I remembered that we had a Pilot Officer Cowan on our watch, who I assume was getting on the job experience, under the eye of a more experienced officer-apart from the odd intruding U.S bomber, which I have mentioned, he would not have had much opportunity. I must have been one of the few airmen to have been paid ,whilst nude: P.O.Cowan came to the billet to hand out our pay and he was told that I was in the shower, so he came out to me and I had to stand dripping wet and sign for my pay! We were paid in Scottish bank notes and in those days there were more banks, so we used to swap notes like cigarette cards- “I swap your British Linen for my Clydesdale”! 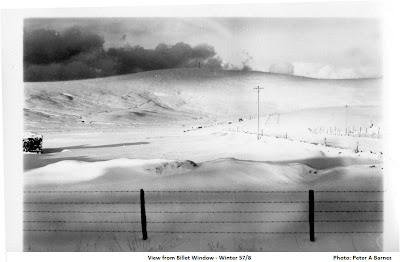 The local population, who did not consider themselves Scottish, but Scandinavian, were still living in crofts. I understand that they did not have electricity until the RAF supplied them from the large generator which served the camp and radar site. We used to say that our nearest railway station was in Bergen!

The Royal Navy had a building underneath the radar block, but we did not know what they were doing - I guess underwater detection. Sometimes they would give one or two of us a lift in their Humber Pig up to the radar site. They must have lived on the domestic site, but I don’t recall ever seeing a sailor in the NAAFI.
There were about four RAF policemen on the unit and, as they seemed to work a different rota to us (probably alternating between domestic and radar sites), we got to know each one. Normally, only one of us at a time had a break, so I often used to wander down the corridor to the guard room for a chat. I remember Alan Beddow, who used type away at an ancient typewriter, hoping one day to be a novelist. Another one had been a Met Police cadet (I think he might have been another Ron Price) and a couple of years later I was driving through Ilford and spotted him on his beat (remember those days!) and I stopped for a chat, hoping he would not book me for stopping on a yellow line!

Before the winter closed in, we used to go for walks and on one occasion we discovered a concrete base, which had housed a Chain Home radar mast.
I had one unusual experience, when I spotted an echo approaching, if I remember correctly, from the west and I called F.O. Green over and it shot in almost a straight line east at a speed F.O Green estimated at 3,000 knots. It had disappeared before any action could be taken. There was an army missile range at Benbecula in the Outer Hebrides, but our wise sergeant said he had seen similar before and he gave the impression that he thought it was an electronic quirk. I feel that I can mention this occurrence, as similar ones have been mentioned in the Radar Museum Newsletter. We had a PDU table, but it was never used and F.O. Green controlled intercepts from the console. I cannot recall whether the Type 80 had a height finding capability or whether we used a Type 13.

I think that I have exhausted my reminiscences (and you!) of Saxa Vord."