When I joined the Air Defence world in 1967 there was an already long established organisation called the Control & Reporting Evaluation Team (known by most as “The Trappers”).It wasn't a large team, usually a Wg Cdr Boss, a Sqn Ldr, 3 Flt Lts and clerical support. The Officers would all be Fighter Controllers
The team had a number of responsibilities, one to which was the production of the quarterly C&R Bulletin. This contained news and stories about air defence activities and was usually a good read. Its main problem was that it was that it had to be classified secret and sometimes the distribution was complicated. Another of the Teams responsibilities was to visit air defence units and assess the competence of controllers and operators – both theoretically and practically – hence the nickname “The Trappers”.
Early in the 70’s the name of the team changed to the Air Defence Environment Examining Board, a bit of a mouthful so they were simply known to most by the acronym – ADGEEB. It was about this time that the Team assumed another major responsibility, that of assessing the capability of the students completing their courses at the School of Fighter Control (both controllers and operators).
Personnel at those at units expecting visits from the team spent many days studying and preparing for their assessment. Poor results could lead to remedial training or, in serious cases, posting. I can’t remember the frequency of visits but I think it was every couple of years. The Team would have visited Saxa Vord on a number of occasions and the first visit I have a record of was in Nov 59, just 2 years after the unit (91 SU as it then was) became operational. The members of the team then were, Sqn Ldr Akehurst, Flt Lts Holburn, Floyd, Salt and Duke. I’m afraid the names make me feel old – Les Akehurst was OC School of Fighter Control when I passed though it and I met Joe Salt (Maltese I seem to remember), but I can’t recollect where – both nice people.
The only visit to Saxa Vord by the “Trappers” I have enough data to produce a section on took place in 1974.The members of ADGEEB who arrived at the Unit on 3 May 74 were Wg Cdr Dave Owen, Flt Lt Taff Gwynne, Flt Lt Kelvin Holmes and Flt Lt Pat Gallanders. They can all be seen in this photo which was taken at RAF Bentley Priory. 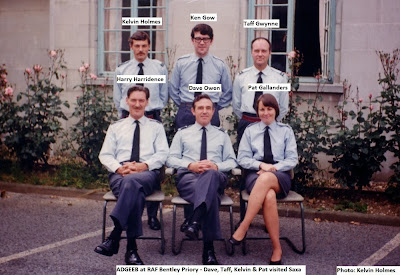 As so often happens on remote stations, the “outsiders” seemed to be blessed by some good weather. 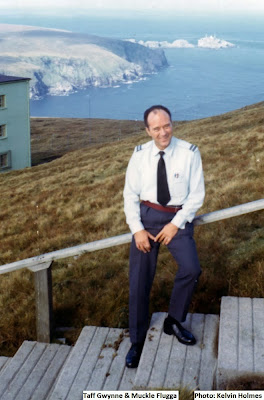 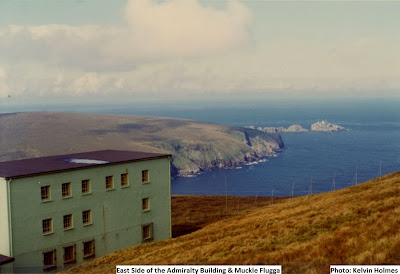 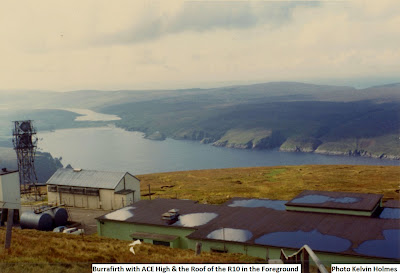 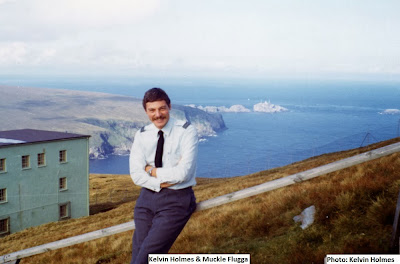 I expect much to the relief of the Senior Ops Officer and to the CO (Sqn Ldr Mike Boddy), unit personnel did well in their assessments. I notice that the Officers kindly allowed the SNCOs & Airmen to outperform them! The last picture in this section shows the relevant entry in the Saxa Operations Record Book (Form 540): 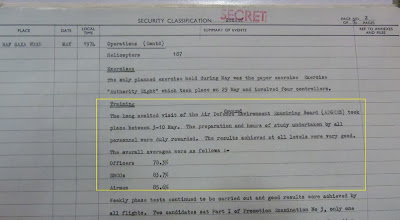 I’m grateful to Kelvin Holmes for allowing me to use his photos.
CONTENTS LIST
http://ahistoryofrafsaxavord.blogspot.co.uk/2012/03/contents-list.html
﻿
Posted by Gordon Carle at 00:01 No comments: