Shetland Radar Part 1 is here:
http://ahistoryofrafsaxavord.blogspot.co.uk/2009/11/shetland-radar.html
In terms of military units Shetland Radar was short lived – just ten years from opening to closure (Oct 78 to Sep 88). It was a very busy Unit, handling around a quarter of a million movements in its lifetime. It was also fairly unique for an RAF Air Traffic Control unit in that the vast majority of aircraft which it controlled were civilian and were helicopters. The establishment was small – just 4 controllers and 4 assistants so their “productivity” was high. 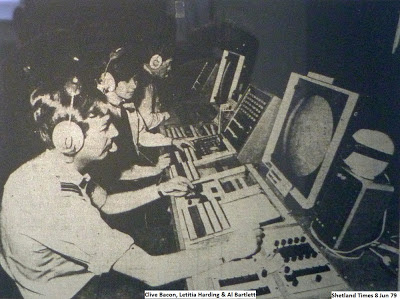 An early photo appeared in the Shetland Times issue of 8 Jun 79. This picture was taken in the R101 and looks to have been posed for the media. The two people closest to the camera are Clive “Crispy” Bacon and Letitia Harding – both Air Traffic Controllers. The third person appears to be Al Bartlett, a Fighter Controller. Letitia explains how the Unit began:
“Shetland Radar came into being in about September 1978 when Bristow's and British Airways helicopter pilots went on strike over safety concerns. Sumburgh could not offer good radar cover and the only alternative was Saxa Vord - problem was that it was manned by fighter controllers. The call went out to the Area Radar stations that they needed three controllers to go in September and stay until January 1979. I (from Midland Radar) was one of those first three along with the guy on my left  and, I think, Bob Jones. We started with equipment borrowed from the fighter controllers. We flew down to Sumburgh to meet with the pilots and drew up a plan of radials and heights for outbound and inbound helicopters. The system worked well and was, I believe, used for quite a while after I left”
I’m grateful to Tony Worth for another early photo: 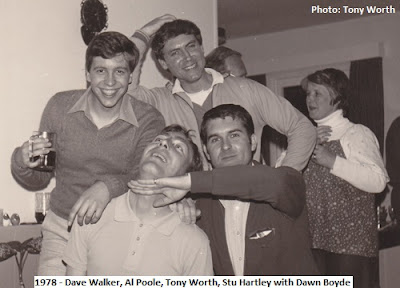 The next sequence of pictures has all come from Pete Yates who was a controller on the Unit in 1982 & 83. Pete controlled the 100,000th movement handled by the unit – a Bristow’s S61 inbound to Unst, piloted by Russ Smith.
Being young, in military terms, Shetland Radar did not have its own official crest so it must have been galling to see the 91SU/ Saxa plaques about the Station. A couple of people (possibly Maureen Burchell & Fiona O’Brien) decided that the Unit should have its own crest. A design was created and a plaque constructed. It was duly hung on the OCs door where it was admired by many – Including the AOC MATO (Air Officer Commanding Military Air Traffic Organisation), Air Commodore “Max” Bacon. At some stage political correctness took over and the plaque was removed. It was rescued by Pete when he was posted and he has sent me this photo of the only Shetland Radar Plaque! 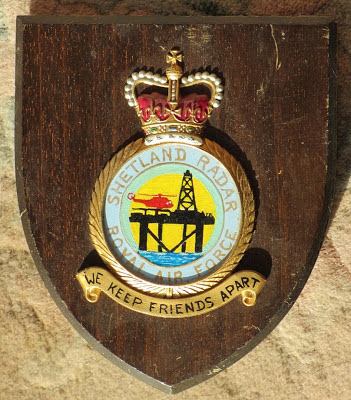 At about the same time a “zap” was produced – a copy from Pete Yates is reproduced below:

On his departure Pete also took away copies of 3 cartoons drawn by a Cpl Neil “Taff” – surname forgotten, an  Air Defence Operator (TG12) –  (if anyone can identify the artist please get in touch). In the first picture a well-known Unst resident Albert Ross is seen. Albert Ross first appeared at Hermaness in 1972 and returned most seasons until 1995. He was obviously looking for a mate as in his later visits he built a nest. Unfortunately there were no other Black-browed Albatrosses around at the time. 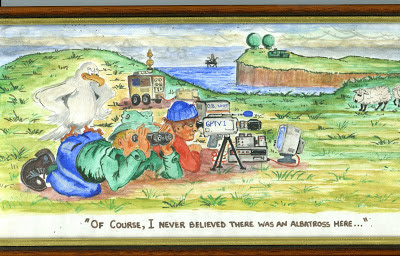 I’ll let Pete explain the next cartoon:
“During the summer of '83 there was an IDRO on detachment, I think from Buchan, whose name I can’t remember. He came fishing with Doughnut  (a Bristow’s Pilot)and myself in the Bristow's speedboat and somehow managed to throw both himself and a couple of hundred pounds worth of the unit's fishing kit overboard, along with the only pair of glasses he had brought with him. Without them he was virtually blind! Taff drew this whilst listening to us making sure our statements for writing-off the fishing kit matched. I think the empty tinnies flying through the air were nearer the truth but statute of limitations and all that!” 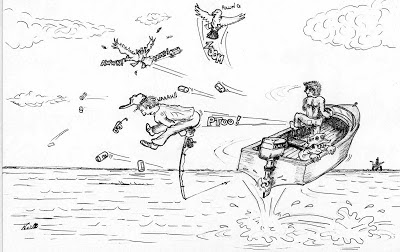 Again I’ll let Pete explain the final cartoon in his own words
“The last I commissioned and presented to Bristow’s at my farewell do in the Baltasound Hotel. It was entitled "A Tour at Shetrad in One Picture". The original was A3 and, suitably inscribed and framed, it held pride of place in their ops room.
Top to bottom. L - R: The Cessna is Phil Brookes; he started to take flying lessons at Sumburgh and is now a Captain with Jersey European. Flight level 60 was the top of Shetrad's airspace, we were actually working under the Copenhagen FIR out to the East Shetland Basin. Bristow's 61N, the workhorse in those days. Russ Smith, who was Bristow’s Chief Pilot on Unst in those days, always used to wear a baseball cap and one afternoon was walking in having just landed as AOC MATO was being driven out to his Devon after his farewell visit on posting. Russ threw up a salute and Max Bacon returned it! Eugene O’Brien and I had a day's winching practice with Russ.
BA had started to use Chinooks during my tour. One of the Captains was Indian; I don't know whether or not he was a Sikh, but the turban is a nice touch. The Hueys were used as safety machines based on the rigs. A lot of the Bristow's pilots had worked in Borneo and talked about the locals' pigeon English; a pelouse was a helicopter and lic was small so a lic lic pelouse was a very small helicopter - logic somewhere! The Super Puma was just entering service with Bristow’s.
No explanation needed I think! A Nimrod on a "Tapestry" (fishery protection) trip. The Ninian Central needs to be looked at carefully to see Taff's imagination running wild. The fishing trip again. 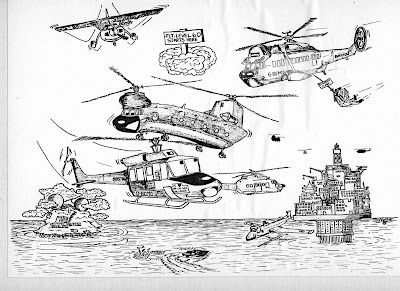 The unit continued to be busy. The 175,000th movement was controlled in the summer of 1985 and was the subject of this short article in the Shetland Times dated 19 Jul 85. 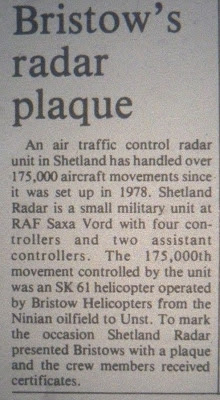 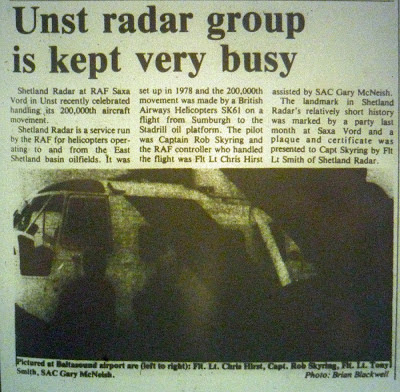 The decision to close Shetland Radar was announced in May 1988. The work would move to Sumburgh and be carried out by civilian controllers. The other major change was that primary radar would no longer be used; instead Secondary Surveillance Radar would be employed. This depended upon the helicopters all carrying transponders and signalling their own positions when interrogated by ground equipment. The following article appeared in the Shetland Times dated 20 May 1988: 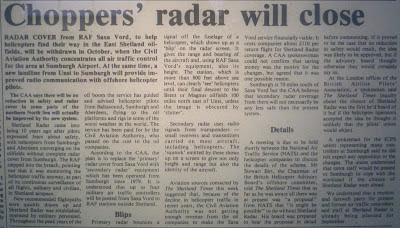 Shetland Radar finally closed at the end of September 1988. If anyone has more (printable) information on Shetland Radar, I would be pleased to hear from them – gordon.carleATgmail.com (replace the AT)


As a sort of annex to this piece I thought I would start up a rogue’s gallery containing contemporary thumbnail photos of people associated with Shetland Radar -servicemen, wives, aircrew etc.  If any of those pictured above have other photos of the time I can include those as well, I’d appreciate hearing from them. Many of the pictures have been clipped from larger photos and so the quality is poor at times. I’m not going to attempt to put all dates and ranks etc as I would certainly make mistakes. If anyone would like to add a contemporary photo I’ll be glad if they would get in touch. One thing the gallery lacks is pictures of assistants! 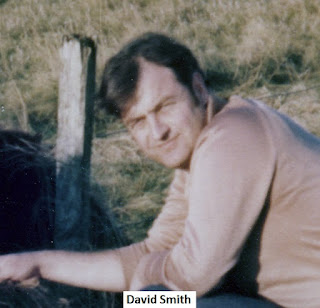 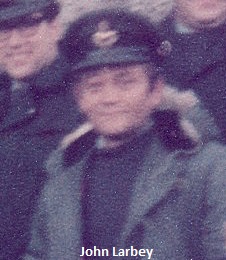 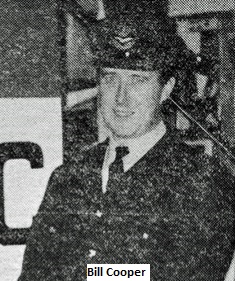 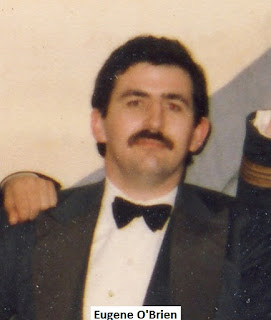 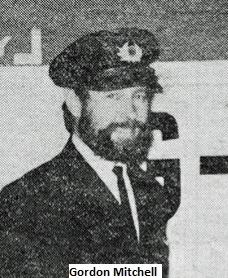 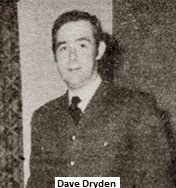 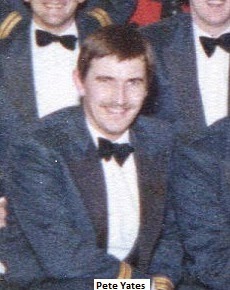 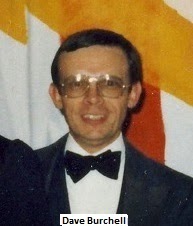 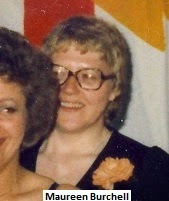 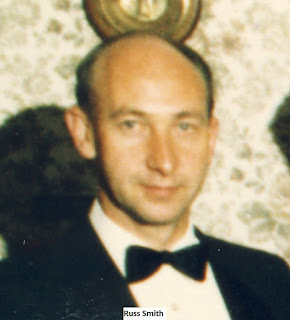 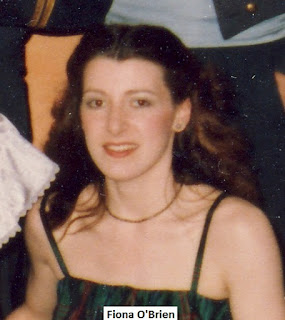 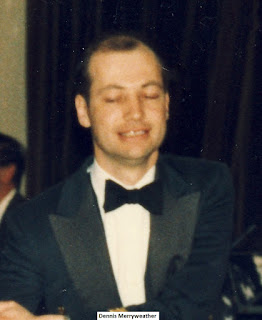 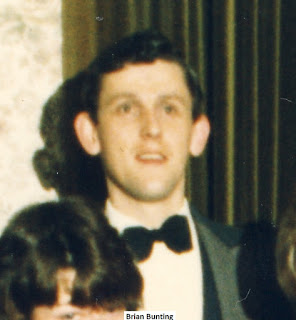 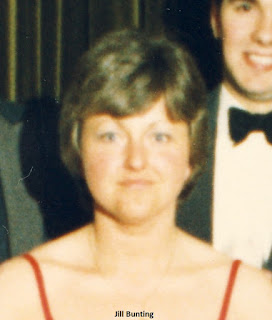 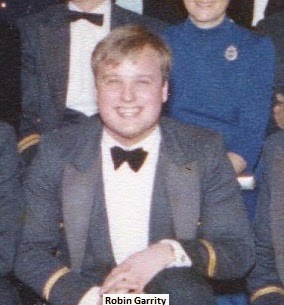 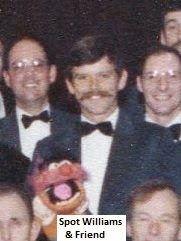 A list of other people I know served on the Unit follows; there were many others and I will be very happy to add their names and/or photos
? Crowhurst  (Controller) Sep/Oct 78
Ticia Brewster/Harding, arrived Oct 78
Tony Dunster (ATC Asst) at the beginning