During the half century of the Units life a number of significant archaeological discoveries were made by servicemen stationed on Unst. The most important in international terms occurred in 1963 at Underhoull, near Westing in the south-west of the island and this is the first site in Saxas’ history about which I have information. However, a number of other major sites were also detected.
The Shetland Islands have been inhabited for more than 5,000 years. A fact that not many visitors realise is that the islands used to have extensive areas of shrubs and trees. Human occupation led to large clearances for agriculture, shelter and fuel. The introduction of sheep and other animals (rabbits etc) ensured that most seedlings which “popped-up” didn’t last long. In the last couple of hundred years humans have started to plant trees in plantations, often with non-native varieties. However, there are still remnants of native species where animals and people have found access difficult; for example, on islands in the middle of lochs and on cliff faces. The picture below shows some native Aspen on a very steep slope in the north mainland – the photo was taken in August. (Leftclick on pictures to enlarge). 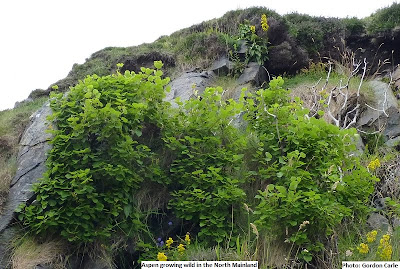 The result of the relatively mild climate (no I’m not joking – compare it with places at the same latitude - Southern Greenland, Alaska etc), good fishing, good anchorages and land which could be farmed, has led Shetland to be well-populated for a long period.
What’s all this got to do with archaeology you may ask. The situation is that in this small land mass there are possibly more “archaeological sites” in a square mile than in any other part of the UK. There are many known sites which have never been “dug” and there are probably still many sites yet to be discovered. Factors which decide which sites are to be excavated include not only their perceived importance but also economics and their distance from the road! In summary, a great place for an amateur archaeologist (sometimes leading to disappointment when the “experts” don’t react as hoped and the find is “mothballed”).

Underhoull
The discovery of Underhoull is described in the article below from the Press and Journal in 1963. Below the article are 2 photos of “the dig” surrounded by civilians and serviceman, 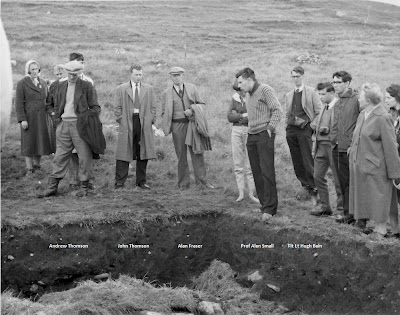 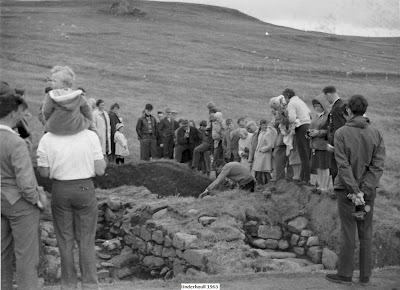 The dig also featured in a later station magazine from the summer of 2000 “The Saxa Voice”, the 3 pictures below are from that issue:- 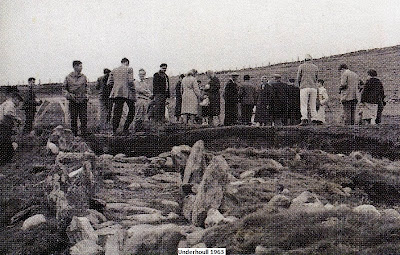 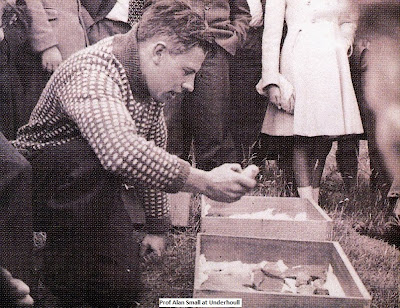 For those with a greater interest in the site I have put a link to a 28 page .pdf document written by Professor Alan Small who was in charge of the dig (It may take a moment or two to download). There have been further excavations on the site since the original efforts but I leave those who are interested to do their own research on the internet.
http://archaeologydataservice.ac.uk/archiveDS/archiveDownload?t=arch-352-1/dissemination/pdf/vol_098/98_225_248.pdf

Clugan
In 1970 a sergeant stationed at RAF Saxa Vord made another discovery on the east coast of Unst. The following article appeared in the Shetland Times:- 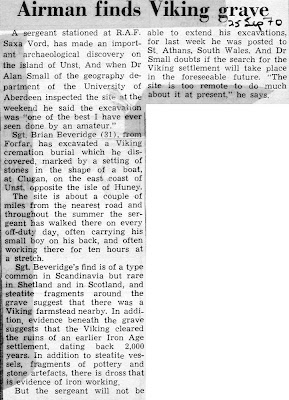 The Royal Commission on the Ancient and Historical Monuments of Scotland describes the site as follows:-

“An Iron Age and Viking site lies on a structural bench some 10m OD and 50m inland at Clugan. The site was excavated by Sgt. B Beveridge RAF, and revealed two distinct horizons. The lower showed no structural remains but a large quantity of pottery, some iron slag, pumice, and stone tools. The pottery is clearly of the Shetland Iron Age type, probably of the immediate post broch period. Section evidence suggested that the site had been systematically cleared and levelled before later structures were built. The only structure on the upper horizon on the area so far excavated was a Viking cremation burial with no grave goods. The stones at the eastern end are still in situ but those at the other end had disappeared. Clearly defined post holes with packing marked their position. The stray finds from the upper 20 cms of the soil included numerous fragments of massive steatite vessels typical of the Viking period in Shetland, suggesting that a longhouse lies nearby.
Small, A 1970;
Information from Sgt. B Beveridge to OS 1970
Site located at HP 6439 0646 by OS field surveyor (K Frost) 8 May 1970”

Most Northerly House Site in UK?

The only information I have about this site is that which is contained in the short article that appeared in the Daily Mail which is reproduced below:- 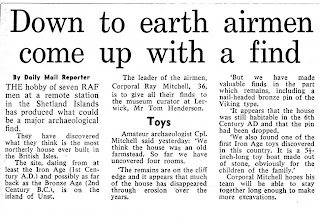 Posted by Gordon Carle at 00:34 No comments: