RAF Skaw did not close immediately after VE Day (Monday 8 May 45), ships were still at sea, Coastal Command had ongoing operations and there was the remote possibility that some German aircrew would not accept that the war was over. VJ Day, 15 Aug 45, marked the end of the war in Far East. The Skaw Chain Home Station actually ceased reporting on 4 Aug 45 and was placed on care and maintenance with effect from the 22nd - two weeks later. However, some classified experimental work kept some of the equipment operational and a few dedicated personnel on site for a period after this. The operational history notes that in Oct 45 "Both Channels of the Type 1 AMES at SKAW (the Chain Home Radar) on a "caretaking basis" have been overhauled by a Wing party: authority had not been received as yet from HQ 60 Group to lower the Transmitter curtain arrays" Then there is an entry on 21 Nov, which says: "Type 1 Skaw: Gave instructions for this Station to become operational for the limited purposes of research on Air Ministry instructions".


Early in the New Year ('46) there are further entries: "The Type 1 at SKAW, although on a care and maintenance basis, has been carrying out transmissions for experiments in Porto Rico. The R.N.A. (Radio Navigation Aid) channel at SKAW has been placed on a caretaking basis, and it has been found impossible to carry on with experimental transmissions. Authority has been sought from HQ No. 60 Group to cease transmissions on the type 1" and, on 24 Feb 46 it is recorded that; "The experimental work being carried out at SKAW was discussed with M.3.  It was pointed out that this section was holding two mechanics at SKAW for this experimental work, and it was requested that information be obtained as to the probable duration of the experiment. M.3. pursued the matter with HG No. 60 Group, but since Air Ministry and WASHINGTON are involved, no immediate decision could be given". So far I have not been able to discover the nature of this "experimental work" with US. It may well be unrelated but, the Loran navigation site, AMES713 at Outer Skaw just north of RAF Skaw, closed down on 20 Feb 46 and was placed on care & maintenance.


At one stage the number of servicemen based in Shetland during WWII peaked at over 20,000. All of these men had to be fed, accommodated and transported.  As early as 1946, it was realised that it would not be economic to ship much of the less valuable material back to the UK mainland. In the next few years many items were sold off within Shetland and the opportunity for those civilians with a little capital to purchase items like nissen huts, wooden huts , barrack room furniture and some vehicles, existed. Unst with Skaw, the Navy radar on Saxa & the Home Guard would have had plenty of material for disposal. However, at the time when the Transmitter and Receiver towers were demolished in 1947, much of the Domestic Site was still standing. The following photo, taken from the top of one of the  360' Transmitter Towers, was sent to the late Lexie McMeechan by Leslie Smith: 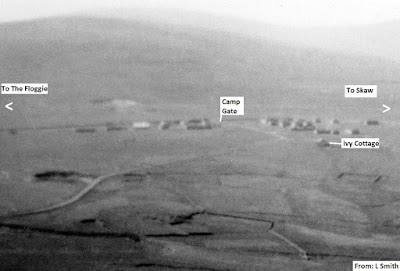 The decision to dismantle the RAF Skaw Chain Home site (along with a number of others), was not long in coming. The Towers were blown up in 1947. The following photo from an Unst History Group Calendar shows the northerly 360' Transmitter Tower in the process of collapsing, with the hill of Saxa Vord in the left background: 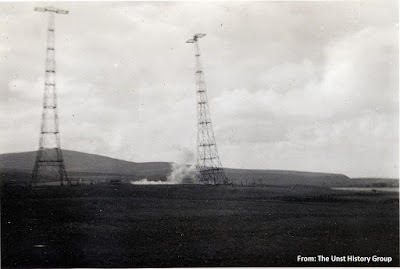 Unfortunately this  tower landed on the roof of the uninhabited Transmitter Block, where it caused some damage, as can be seen in this picture from Leslie Smith: 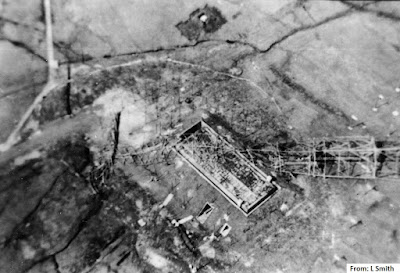 Some of the damage is still visible 70 years later: 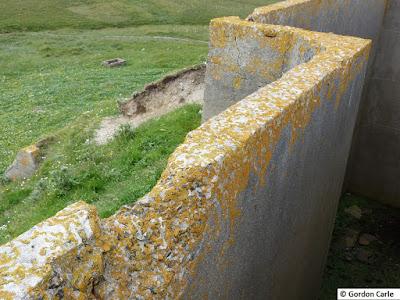 The 240' wooden Receiver Towers came down more successfully, but I have no idea what happened to the tons of Douglas Fir they had been constructed with - but I could make a few guesses, wood being a scarce commodity on Unst! 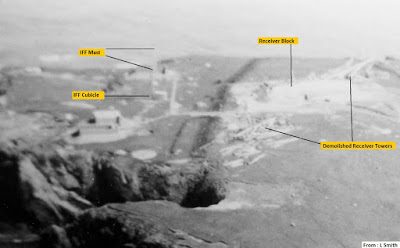 As can just be seen in the left  of  picture above, the 105' Mk3 IFF mast is still standing but it was probably lowered, using the cable guys, soon after. 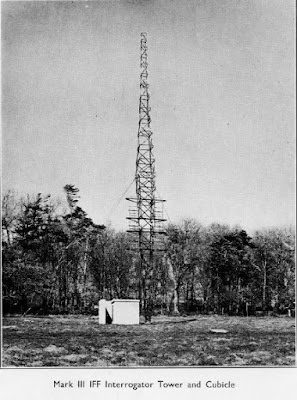 After a short time the only structures left were those which had been built with concrete and bricks (Bunkers, Power House, Cook House, Air Raid Shelters, etc). During Aug 54 the land, which had been occupied by the Air Ministry for RAF Skaw,  it's Remote Reserve and subsequent Loran site, was derequisitioned (ie, returned to its previous owners).

Coincidentally, 1954 was when preparatory work on the construction of RAF Saxa , with its Power House and Bulk Fuel Installation, began.  Once again many workers from Shetland and the UK Mainland were needed for the projects and it is quite possible that many of the civilians who helped build the WWII sites in the Islands and some of the ex servicemen who worked on them were involved.

In the period since RAF Skaw closed the land the military occupied has seen many different activities.  Primarily the area has been returned to crofting use but many leisure pursuits have also taken place. For a number of years the personnel from RAF Saxa Vord had a self-maintained golf course, the Standby Power house has been used by local boat owners to provide shelter for maintenance work and for a while the galley for the Norwick Up Helly Aa was assembled in the building. 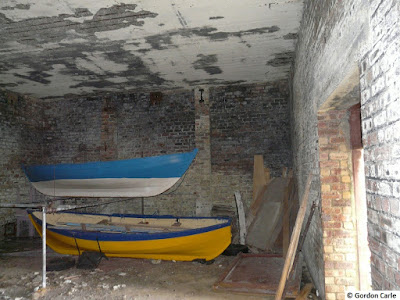 The headland at Inner Skaw has become a place for rock climbers to practise their hobby on its cliffs and, with its extreme north-easterly position, it makes an attractive landing point for rarer migratory birds which can attract many "twitchers". 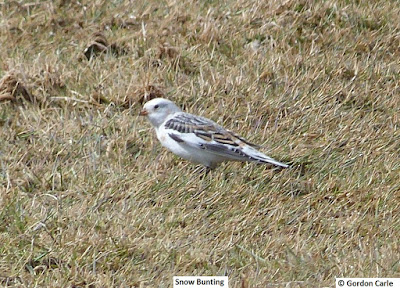 With the discovery of North Sea Oil two new masts were erected for navigation/communication purposes. The first, and smaller of the two, was erected just to the south of the old CH Receiver Blocki. It was owned by Racal Survey Norway  and operated as part of a system called Deltafix, a photo from Mike Pennington is below: 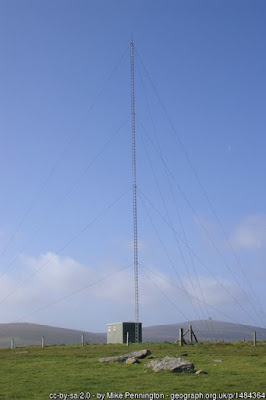 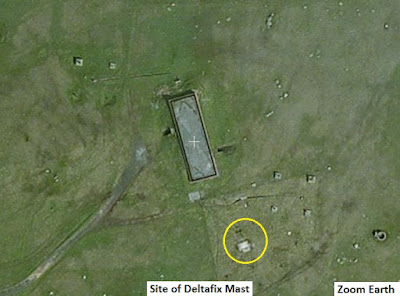 The second structure  was a 300' guyed mast from Racal Survey and was part of the Pulse/8 system: 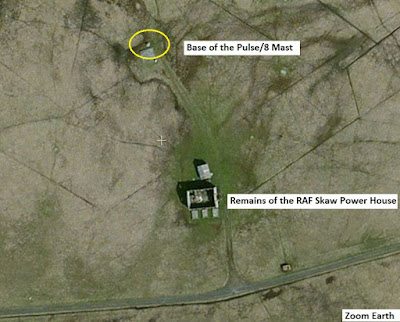 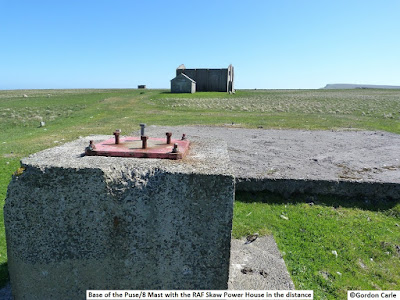 Both the Delafix and Pulse/8 systems were similar to an advanced form of Loran and, over shorter distances, enabled the crews of vessels involved in the North Sea Oilfields to fix their positions with great accuracy.
From the Mid 50's both the RAF and the Admiralty had personnel at Saxa. Unfortunately people generate rubbish and, in the days before the Council accepted responsibility for removing domestic waste from service establishments, much of it was disposed of at the site of RAF Skaw using 2 tipping points (use dependent upon wind direction and strength). It is possible that these two places were in use during WWII but I have no record of that. The first tipping point, to the south, was into an area called The Mooasunds and looked like this: 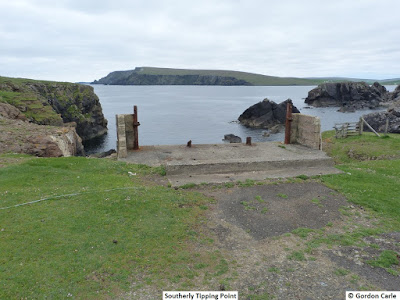 The second site was very close and to the north  of the headland, at a place called Gwykerls Geo: 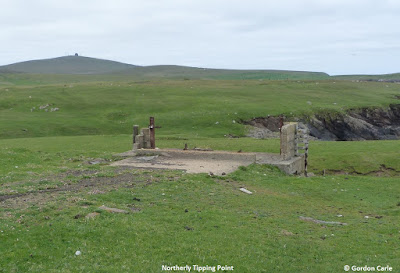 The amount of debris which accumulated over the years, both from civilians and servicemen, was considerable and included numerous vehicles and much machinery! 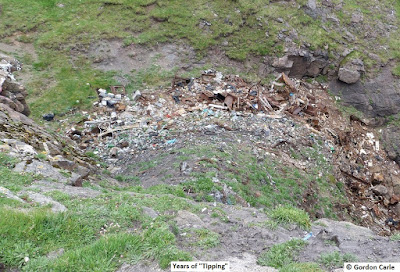 Occasionally, when parts of RAF Saxa Vord were being refurbished, there would be an interchange of information between service employees and civilians. MOD would not allow used items to be given away, only sold by strictly supervised auctions - difficult to organise in Unst - or physically scrapped. It was not unknown at certain times for folk to be below the tipping points to see what  scrapped goodies would descend on them from above! Early in the 90's I think the Shetland Islands Council agreed to collect domestic waste from RAF Saxa Vord and, initially, this was taken to official landfill sites - although some people continued dumping at Skaw it could no longer be considered  "legal" to do so. There was a less well known third tipping site, possibly constructed for the Admiralty in the 50's, at Outer Skaw. This was used to dump material into Forn Geo.

Another activity in the 70's, which would be strongly discouraged nowadays, was the use of a structure built in 1940 as part of the RAF Skaw Advance Chain Home radar site, for fire practice. This was illustrated in the Saxa bog here: http://ahistoryofrafsaxavord.blogspot.co.uk/2012/10/fire-practice-at-inner-skaw-part-2.html 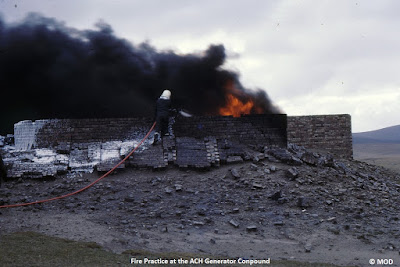 The area suffered a setback in 1995 when the road to Skaw (The Floggie), had to be closed as unsafe. Large cracks had appeared and there was a great danger of the cliff side collapsing into the water below: 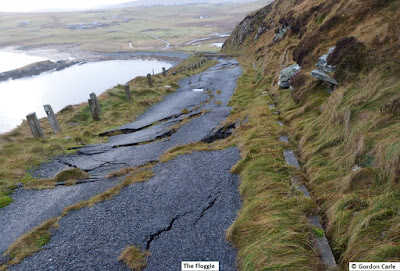 Eventually a new, much longer, road was built and it was possible to gain vehicular  access to Skaw by a route which avoided the cliffs altogether.
At the end of the 20th century an unsuccessful attempt was made to get money from the "Millennium Fund" to turn the old RAF Skaw Receiver Block into a safe visitor attraction, in the hope of generating tourist activity.  Those of you who believe in the preservation of historic sites will be pleased to know that in 2012 Historic Environment Scotland designated RAF Skaw, both main and reserve sites, a "scheduled monument" - the details of this decision may be seen here: http://portal.historicenvironment.scot/designation/SM13097
Previous articles on RAF Skaw
Part 1 of RAF Skaw - Inception to Jan '41 is here:
http://ahistoryofrafsaxavord.blogspot.co.uk/2018/04/a-history-of-raf-skaw-ames-no56-part-1.html