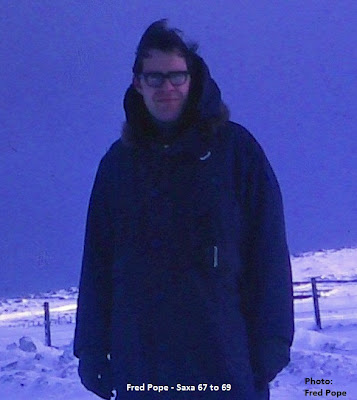 I was in charge of the TACAN, an AN-URN 3, modified to an AN-URN 3A with a gas filled duplexer in 1968. Winter of 68 and the TACAN bearing went haywire. I was on duty at night & went up the mast by myself to find that the shaft on the taco-generator had sheared. I had to take the aerial cover off, the aerial was rotating at 900rpm and all I had was a torch. TACAN RAD faulted to GRSC at North Luffenham – my previous station.

After the watch change at 23.00, adjourned to the NAAFI, where an all ranks dance was in full swing & with great glee informed Sqn Ldr Frank White (OC Eng) that the TACAN was off for a long lime.

In fact it took 3 months for a new Tacho to arrive from the USA – never could work out why a spare wasn’t kept at Luffenham! (Left click on photos to enlarge). 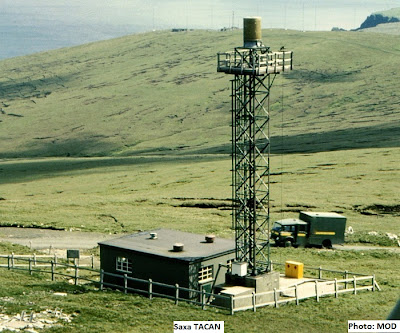 ADDITIONS TO HEROES OF SAXA VORD 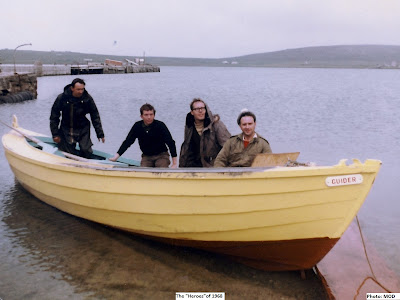 Originally the 4 of us, all members of the sailing club, had wanted to attempt to cross to Norway but luckily Chem said no! Sitting in the NAAFI with a fair amount of beer on board we had the bright idea to go to Lerwick to collect the beer as the Earl was on Strike. A quick call to Chem, who OK’d it but made us promise to phone him on arrival in Lerwick. We left at 23.00 and, after an uneventful voyage down, arrived in Lerwick at 07.00. We were going to have a few beers before returning but a local fisherman, who had watched us chug in at a max speed of 2 or 3 knots with amazement, told us to load & go as the tide was turning and we’d never make it out of the harbour.

We’d phone Chem at Lerwick, who breathed a sigh of relief as he was just about to call Kinloss to send a Shackleton up to find us.
On arrival at Baltasound at about 17.00 the 3 tonner was waiting for the beer, which was rapidly loaded and departed for Saxa Vord. We were left to sort out the safety boat & make our own way to Saxa Vord. We all fell asleep during the dance!

This voyage was the subject of an article printed in the RAF News dated 21st September 1968, which is reproduced below:

INTRODUCTION TO SAILING
After the usual horrendous introduction journey to Saxa Vord – I spent 3 days on the St Clair in Aberdeen port waiting for the weather to abate – one of the first individuals I met was Ron Aves, MT Fitter, who I’d known at RAF Labuan in Borneo along with Chem who was on the long range radar convoy, Type 13, 14 & 15..

Ron told me to join the Sailing Club. I’d never sailed before & in Jan ’68 he told me we were going sailing & using Sqn Ldr Frank “Chalky” Whites (the Commodores) Albacore. He had spent all winter lovingly varnishing & getting it into top notch condition for the coming racing season – Chalky had gone to the Boat Show in London. Off we went to Baltasound in the 1 tonner, Ron happily slugging away at from a half bottle of whisky. 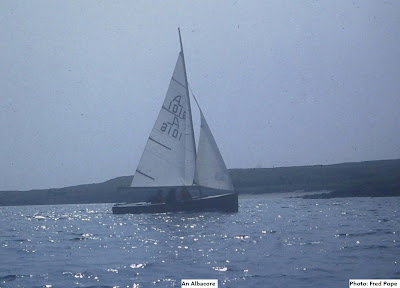 A few days earlier some trawlers had iced-up and capsized off Iceland so one can imagine the sea temperature – I was wearing a jersey, jeans, plimsoles and an oilskin jacket. A lee shore wind was blowing & after the 4th or 5th attempt we got out into Baltasound & promptly capsized. After 3 or 4 attempts at capsize drill, never done it before and Ron shouting, still with his whisky bottle, I thought – this is it!

Luckily a trawler, tied up at the pier, saw what was happening & came to our rescue, grappling hook through Chalky’s boat & we both collapsed on the deck of the trawler.
Once back at Saxa Vord I went straight up the hill on watch – Ron adjourned to sick quarters for a medicinal brandy and I left him to tell Chalky! – I’ve loved sailing ever since.

Pete Overy, Jeremy Thornton and I (all Sailing Club members) went on Expedition Training - ie, a “Booze Cruise” -sometime in 1968 or 69. We went offshore sailing from Fowey, in Cornwall, on an 1898 gaff-rigged lugger called Amulet, to the Scilly Isles and round the Bishops Rock Lighthouse. We went from the northernmost Isle in UK to southernmost and took great delight in phoning Saxa from St Marys, capital of the Scillies. No STD codes in those days – it took an eternity to get through.

We were a tourist attraction at every port we stopped at and the beers kept coming! We were even guests on a Royal Navy Fast Patrol Boat, invited to the wardroom (with dire threats from our skipper to behave ourselves or we’d all have to walk the plank!). Needless to say a little later on we all deserved to walk the plank!
Whilst I have no photo of the Amulet the following picture is of a similar boat passing us – heading in the opposite direction. 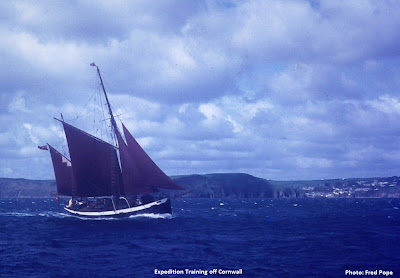 ﻿
THEY CONQUERED OUT STACK
All stories start in the NAAFI bar & one Saturday lunch time Ron Aves, Fred Pope, Nick Palmer, Bob Atkinson, his wife and dog were having a few beers (probably many), when Ron suggested a trip to Out Stack. So, off we all went, Ron was  in a dry suit as he was going to climb onto Out Stack and he was carrying his customary half bottle of whisky. The safety boat chugged all the way round to Out Stack, where there was a big swell on, with waves breaking onto the rocks. 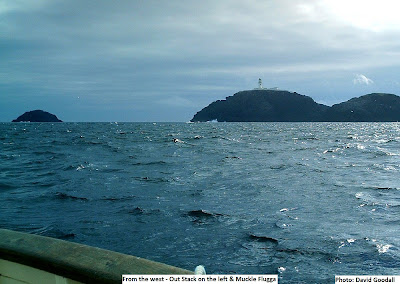 ﻿We got as near as we could & Ron Jumped over the side & proceeded to scramble up the side of Out Stack. At the same time the painter went over the side, via wrapping around the dogs head & the propeller – the engine came to a grinding halt.
Panic Stations! – stopped the dog being strangled & rapidly unshipped the oars to keep us into wind, which was rather difficult in the swell. Ron eventually managed to clamber on board after freeing the propeller & we finally got the engine restarted.
On arrival back at the slip at Baltasound a message from an irate Lighthouse Keeper on Muckle Flugga was waiting for us. He had just been about to launch the lifeboat when we managed to get the engine restarted. Needless to say – this little escapade was hushed up!
CHEM

Chem was the best CO we all had the pleasure of serving under. 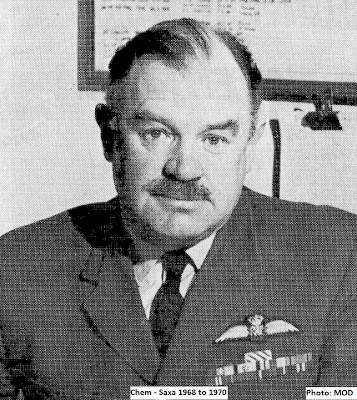 Transport was required to reach the boats at Baltasound so Jerry Thornton & I jointly bought a 1939 500cc BSA ex army motorbike, with no lights, and the Sailing Club members contributed towards a 1947 Morris 8 – with about 8 inches of play on the steering – registration FLY --? (hence the Fly nickname). Needless to say neither was road taxed and was hidden away during visits by the “local” policeman from Yell. We did have both vehicles insured. 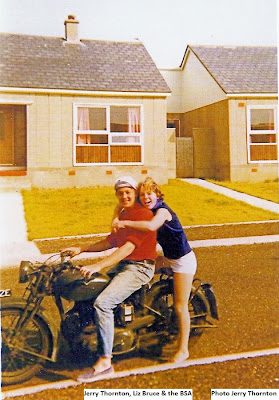 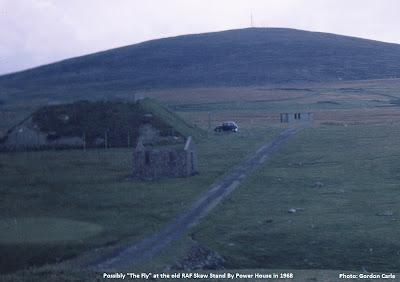 One Saturday night, after a very heavy session in the bar in the NAAFI, Nick Palmer, Fred Pope, John Fernie & Jerry Thornton decided to go & visit Willum & Ken in their croft between Baltasound & Uyeasound – as they had done many a time. Willum & Ken were the postie and cook at Baltasound School. They always welcomed Saxa Vord residents and their wives with home brew & bannocks – the home brew was in a chamber pot which doubled as the Ladies Loo upstairs, when the contents were emptied out of the skylight.

Having purchased the last bottle of whisky from Twiggy in the NAAFI, they set off with Nick driving , He soon fell asleep at the wheel, along with everyone else. We all came to as the Fly bounced across the peat having left the road. He succeeded in straightening up back on the road as the Fly stopped. The petrol tank was spotted on the road about 100yds back. A passing post van was flagged down and we were all given a lift back to Saxa Vord. Unfortunately the top came off the whisky bottle and soaked the mail bag.
The Fly was put back in operation after a jerry can was fitted into the boot as a replacement tank and was eventually disposed of over the cliff at Lamba Ness (Inner Skaw).

My thanks to Fred for his recollections. He has sent me lots more photos - many of which will appear in later sections.