At the beginning of WWII the UKs Chain Home RDF system stretched along the south and east coasts of England and up the east coast of Scotland. However, the most northerly station was at Netherbutton, near Kirkwall,  in Orkney and the equipment there was designed to look primarily to the south-east. In the early part of the war, with all three services having strong operational requirements for this technology, manufacturers of RDF (radar) components had difficulty keeping up with the demand and it was necessary for priorities to be established. Nevertheless, the allocation system had to be flexible to meet new needs. In April 1940 German forces invaded Denmark and Norway leading to the decision to expand radar cover in the Northern Isles.
From the Shetland perspective this meant the immediate formation and dispatch of a radar unit to Unst (No 3 Transportable Radio Unit - http://ahistoryofrafsaxavord.blogspot.co.uk/2013/01/the-first-radar-on-unst.html). It was also decided to build two permanent sites in Shetland, at Noss Hill at the south end of the Shetland Mainland and at Lambaness, in the north of Unst. Both of these sites would become operational as Advance Chain Home (ACH) stations, quicker and simpler to construct than the full Chain Home (CH) stations, whilst work on the more substantial Final CH equipment and structures continued. The site at Lambaness on Unst (RAF Skaw) will be described in later sections, this article will be confined to RAF Noss Hill.


Noss Hill is just south west of the Loch of Spiggie and about 3 miles north-west of the airfield at Sumburgh. The summit of Noss Hill is 367ft  above sea level and, when construction began, there was already an operational Navy radar (AES1), mainly looking for surface plots, at Sumburgh Head. (Left click on pictures to enlarge). 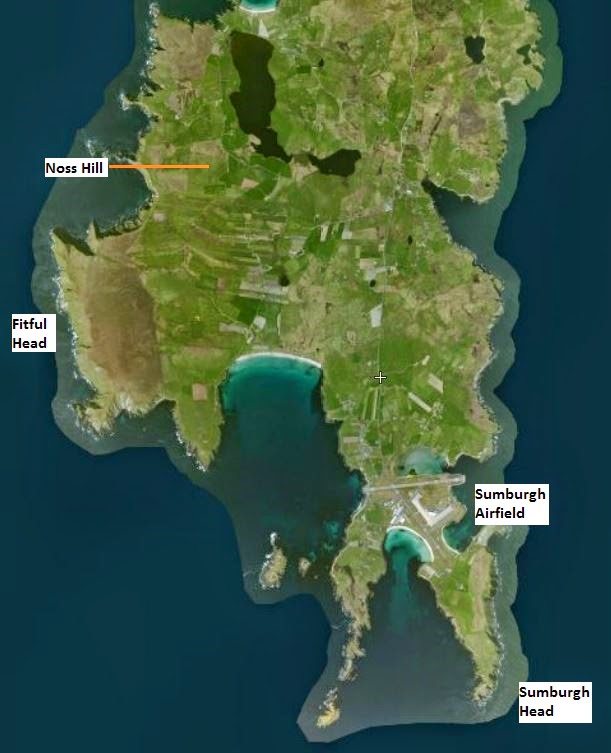 The ACH unit at Noss Hill consisted of a domestic site, two 90ft wooden towers for the Transmitter and Receiver aerials and 3 huts, surrounded by blast walls. The huts were for the diesel generators, transmitter and for the combined receiver/ops room. 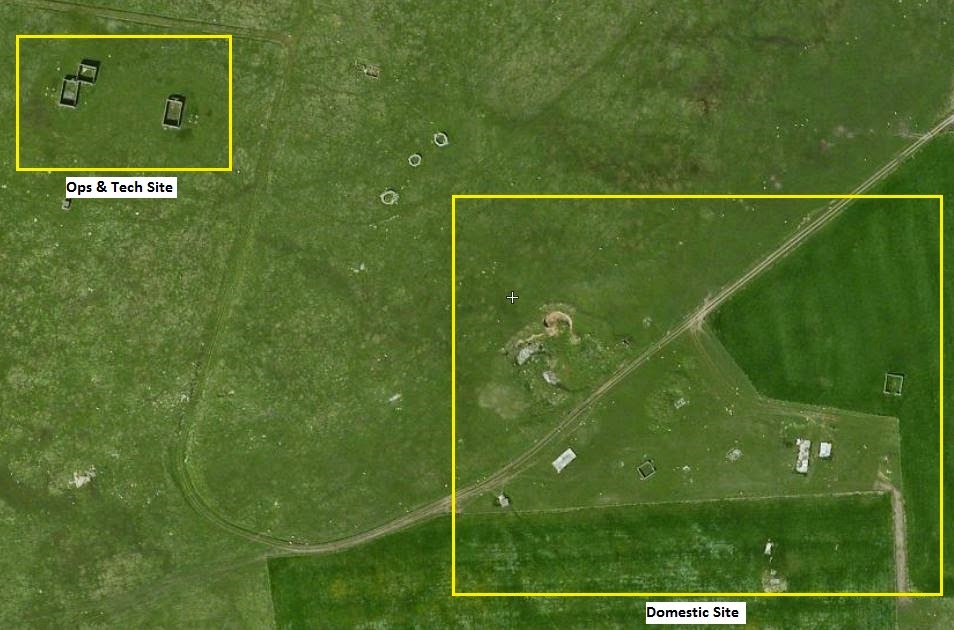 In greater detail the ACH Ops/Tech Site looked like this: 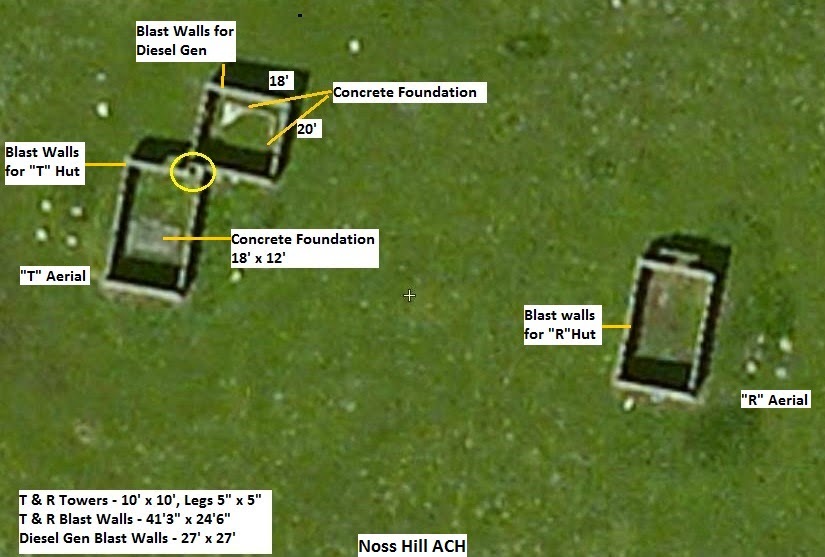 The next picture shows the ACH Tech/Ops area from the north-west. The blast walls for the Receiver Hut can be seen in the distance, the power would have been located in the compound centre left and the transmitter hut centre right: 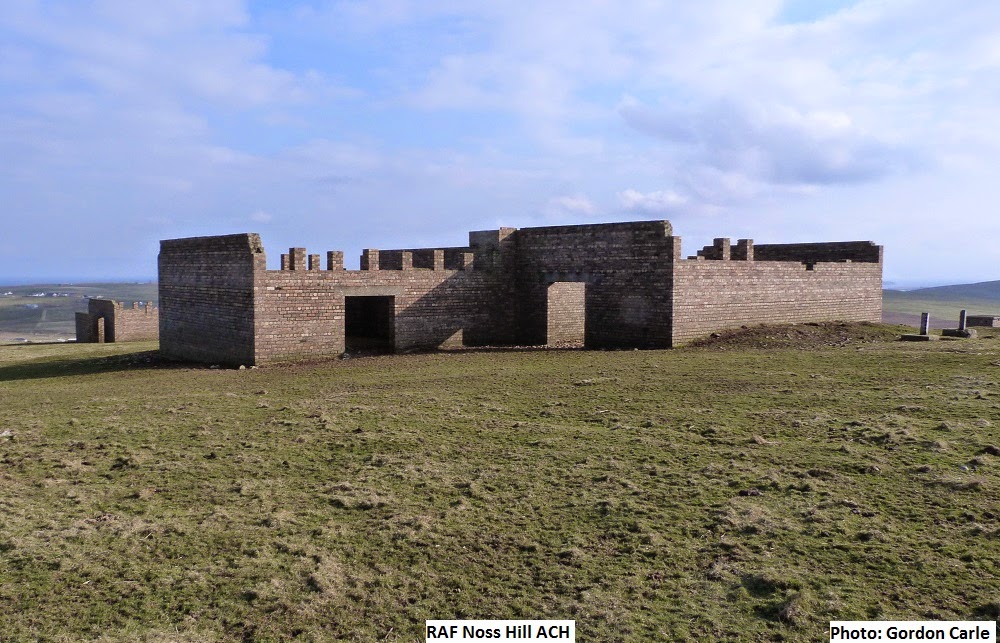 The next photo shows the blast walls which surrounded the Receiver Hut, the footings for the 90ft aerial tower can be seen on the right. 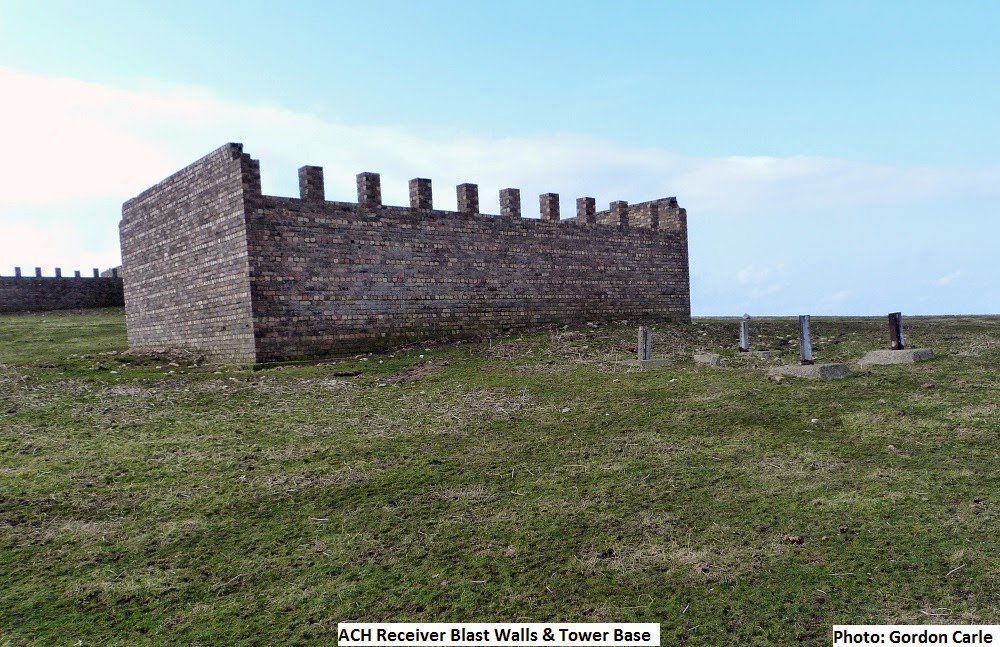 The walls constructed to surround the Transmitter and Receiver are of similar size. Very little, other than sheep droppings, is left inside the blast walls as can be seen from  the following photo, taken where the Transmitter Hut used to stand. 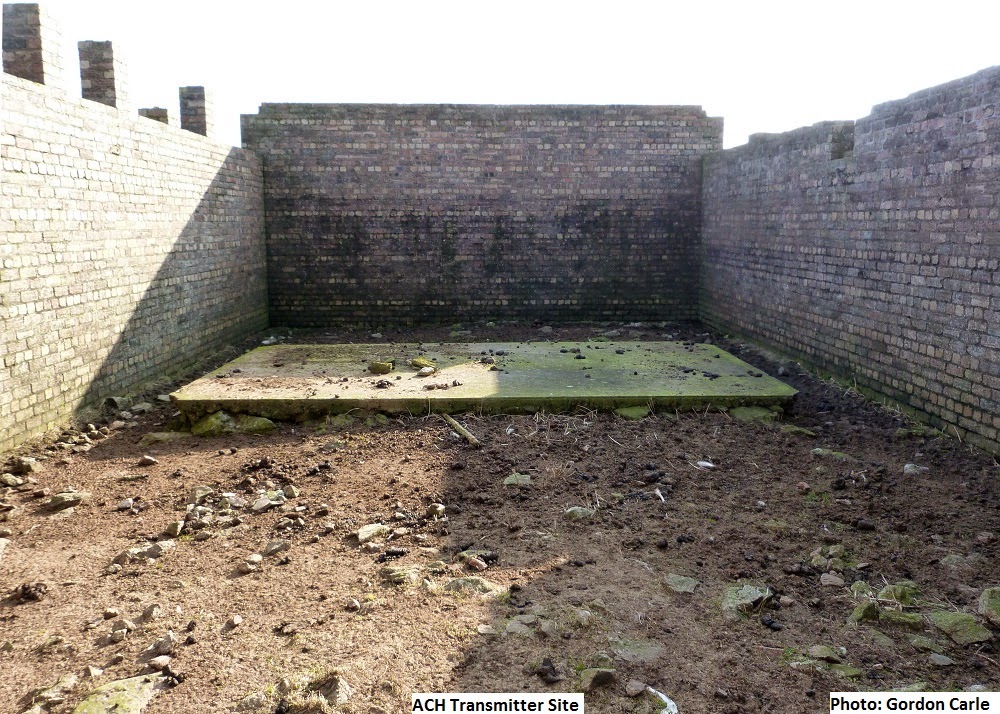 The area which housed the diesel generator is a different shape from the compounds which housed the "T" & "R" Huts, it also has a much larger concrete foundation inside. There are a couple of apertures, which can be seen in the far wall in the next picture - these were possibly used to convey the exhaust fumes from the diesel engines out of the confined space. 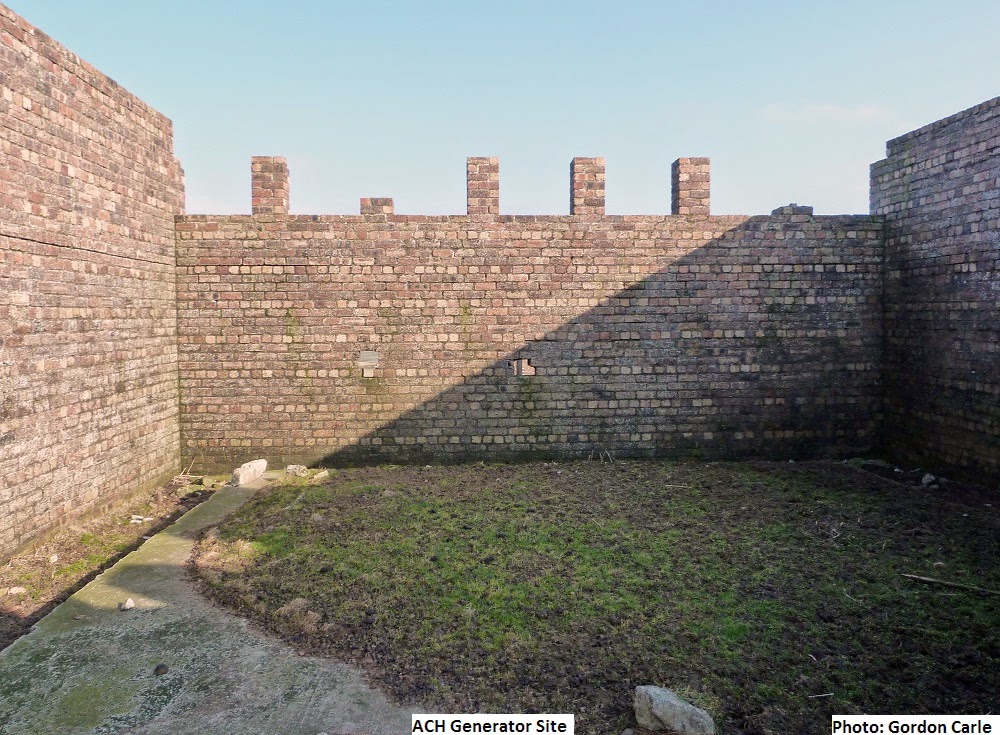 Whilst the footings for the "T" & "R" aerial towers were of concrete and steel, the towers themselves were 90ft tall and made of wood. The legs formed a 10ft square at the base and each leg was 5" x 5". 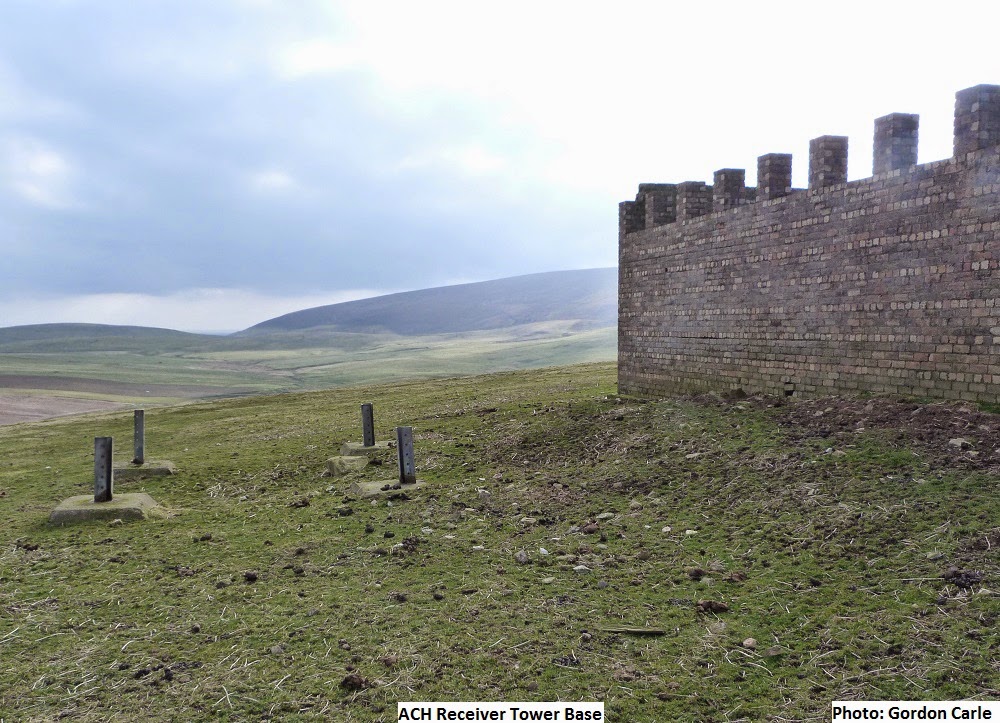 The larger Final Chain Home site took much longer to build and was massive in comparison to the initial ACH unit. The aerial towers dwarfed their earlier cousins and the Transmitter and Receiver/Ops blocks were larger and contained in hardened bunkers.  A hardened Standby Set House, with back-up diesel generators, was also constructed. The labelled extract from Flash Earth shows the main Op/Tech buildings on the CH Site - better descriptions and illustrations will follow. 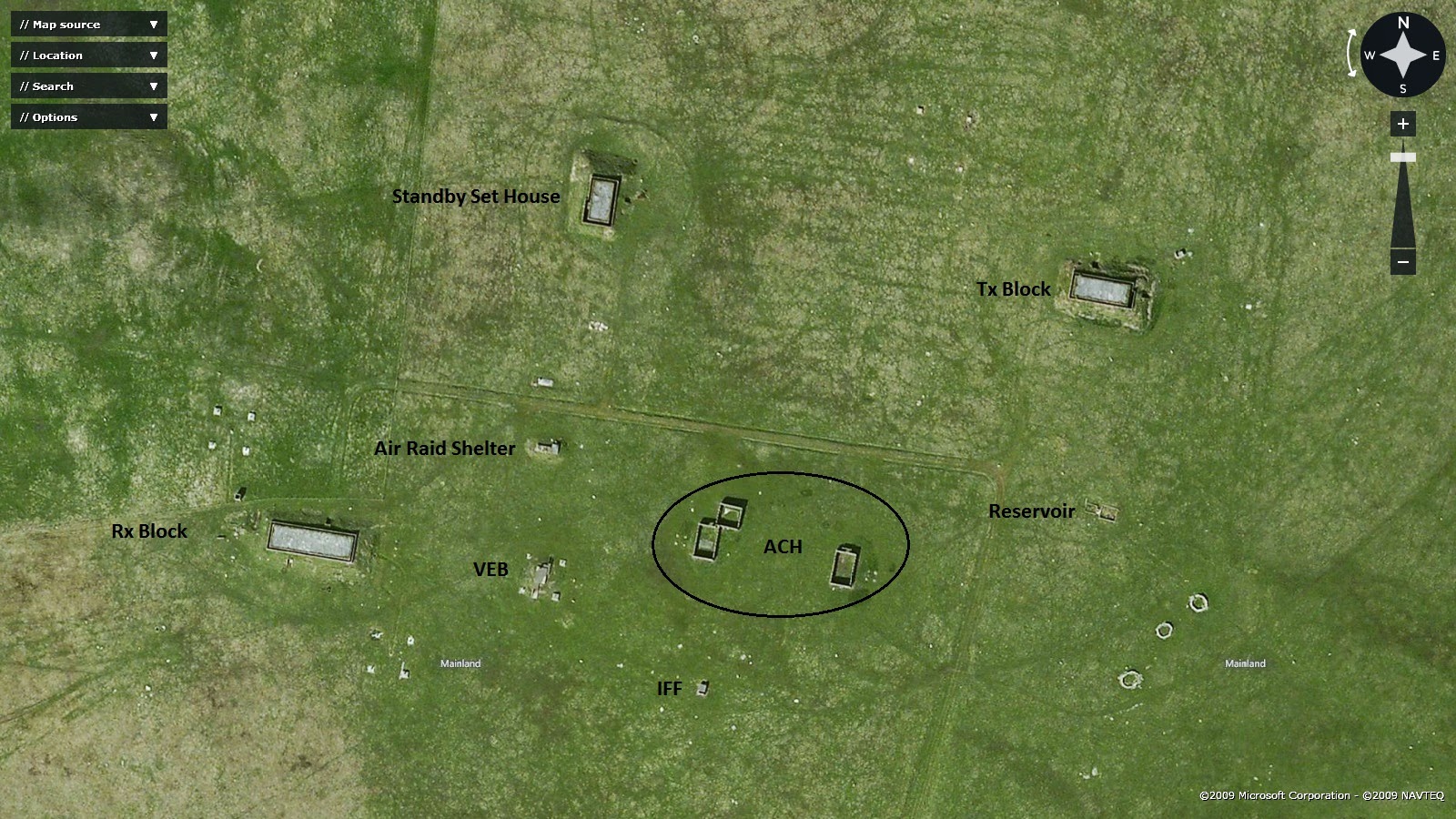 One of the structures marked on the plan above would not have been there when the CH site took over operations from the ACH site, that containing the IFF equipment - more on this later. I do not have a completion date on the VEB so that may also have been constructed after the rest, once again more later.
CH Transmission
Firstly, I'll take a look at  the transmission side of the Noss Hill CH station. Unfortunately, the bunker which used to house the transmitter equipment is sealed and entry is not possible. However, some details are evident. It's exterior dimensions and shape are the same as the similar building at RAF Skaw - the block measures 72' x 26'. The first two pictures show the outside of the Transmitter Block. 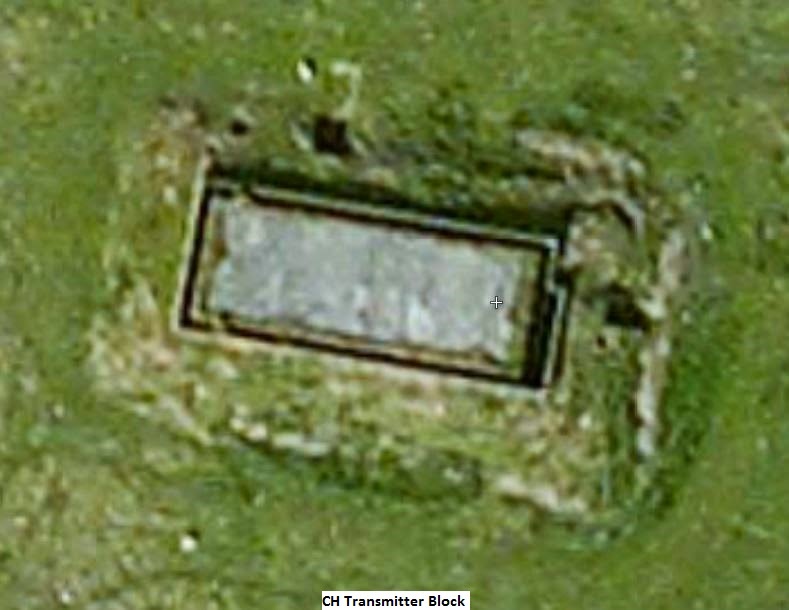 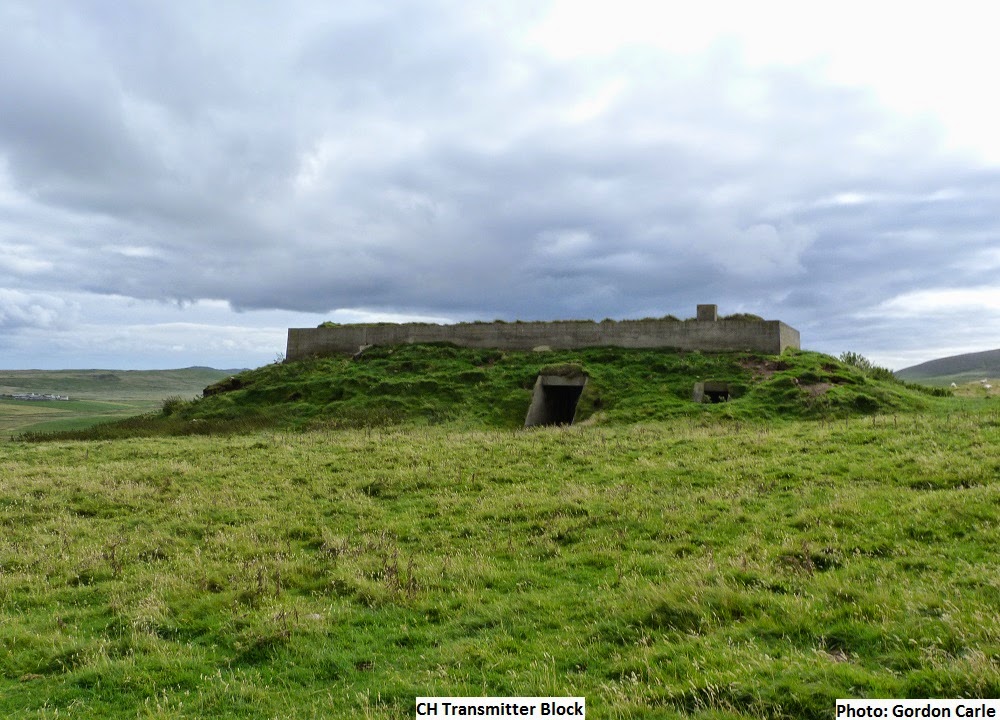 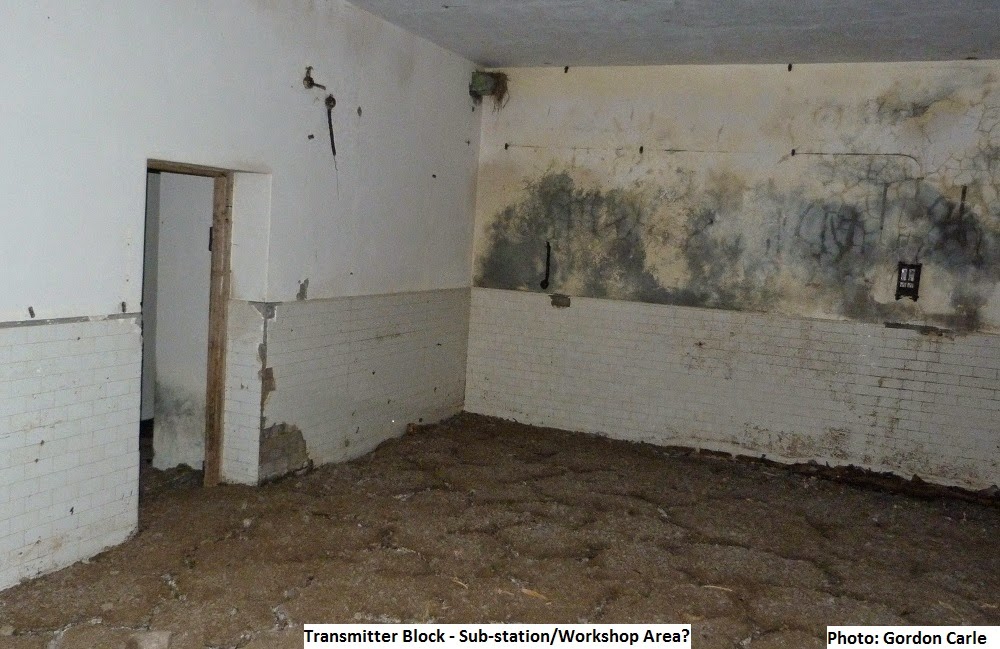 The radar construction programme in UK was an immense undertaking and, to help speed-up progress, standard plans were drawn up for each type of installation. These plans were adapted to a certain extent on site dependent upon variations in available material and local features. For CH radars there were two main types of plans, those for the earlier east coast stations and those for the later west coast units. The differences were significant with regard to equipment, towers and buildings but rather complex for explanation here. RAF Noss Hill and RAF Skaw surprised me in having features associated with both east and west coast CH Sites. At both sites the layout of the Transmitter Blocks follow the plans for a standard east coast CH site, though with the inaccessibility of the Noss Hill  structure. it's difficult to discover what equipment was inside.
The two Transmitter towers were massive steel structures ABOUT 360 ft tall and could be seen from long distances. At ground level the 4 legs of each tower formed a 64 ft  square. The following picture, taken just after the war and held by the Shetland Museum & Archive Photo Library, shows the site from the north with the Loch of Spiggie in the foreground - the Transmitter towers are the 2 tallest on the left. CH stations operated on two wave-bands - 10.10 to 13.27 metres and 5.9 to 7.1 metres. Most CH Stations used wavelengths in the longer band. For comparison, the Type 80 search radar, which was introduced in the mid 50's and installed at Saxa Vord,  had a wavelength of about 10 centimetres and the Lightning fighter airborne intercept radar - the AI23B - had a wavelength of about 3 centimetres.
Note:
During my visits to the Noss Hill CH site the Transmitter Block was sealed. I recently heard from Sammy Sjoberg who has been able to gain access to the building. He sent me photos of the inside and has kindly allowed me to attach some of them to this article.  Considering its age the structure the interior seems to be in excellent condition. I have added a sketch of the RAF Skaw Transmitter Block. which was similar, to provide an idea of the layout: 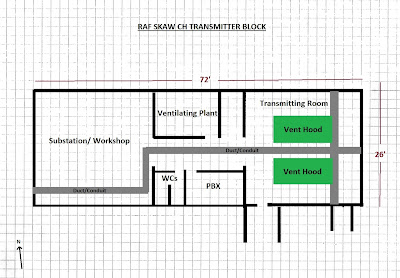 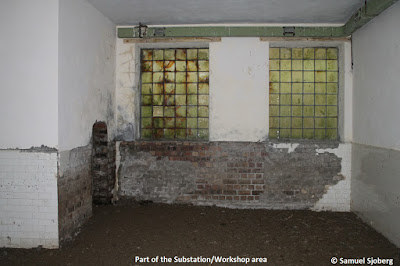 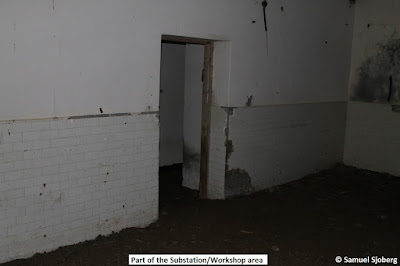 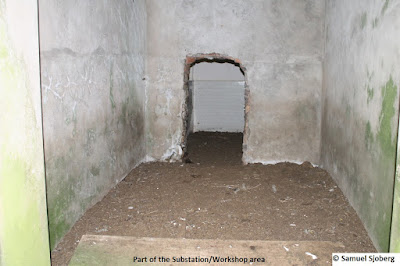 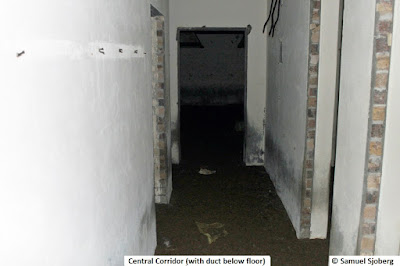 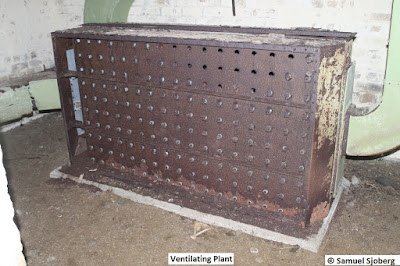 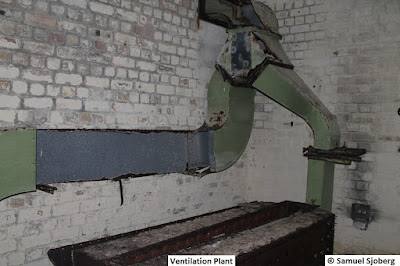 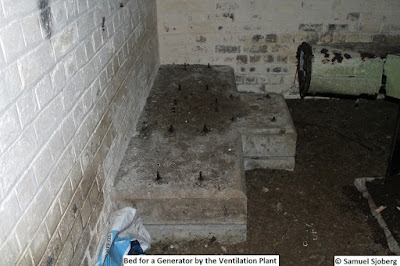 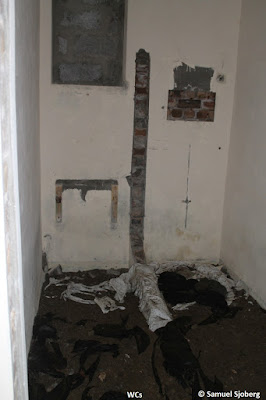 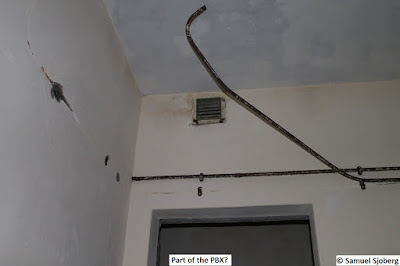 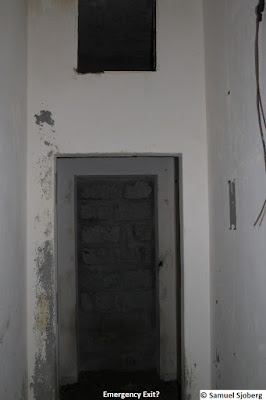 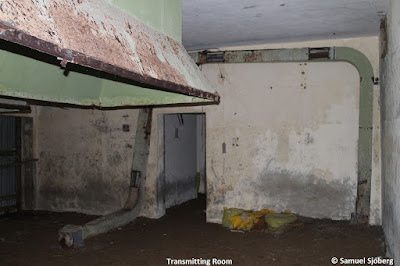 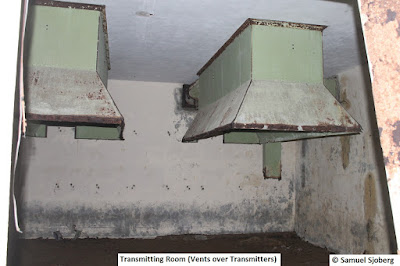 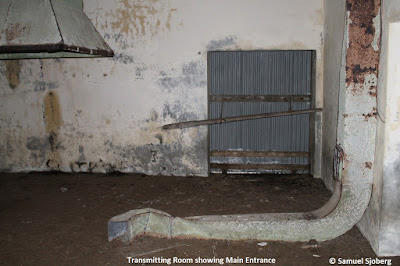