Dave Childs did his National Service from Mar '57 to Mar '59.  He spent the first few months at RAF Hopton in Norfolk and the last 17 months of his RAF time at Saxa Vord. This means he would have arrived on Unst in the early autumn,  before the station was declared operational. He had opted to serve in the RAF Police. It is worth noting that the MOD civilian  police took over from the RAF police at Saxa in the early 60's and controlled access to the classified sites for 21 years before the RAF police resumed their duties in Dec '85 His journey to Unst was not unusual for those days, a trip by rail to Aberdeen then an overnight passage to Lerwick on board the St Clair (1,641 tons) , (Left click on pictures to enlarge): 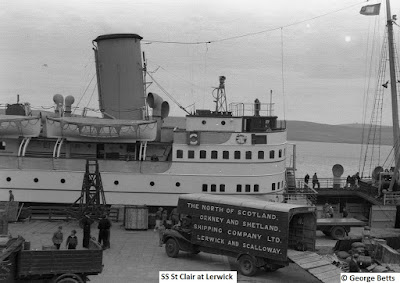 The voyage from Aberdeen was fairly rough and Dave suffered from sea sickness. He was relieved when he stood on deck as they arrived at the harbour in Lerwick. Then someone pointed out the Earl of Zetland, to which they would be transferring for the continuation of their journey. The Earl, at 548 tons, was a much smaller vessel and Dave's stomach remembered it wasn't happy! Fortunately the Earl didn't stray too far from land and they safely arrived in Unst after 8 more hours at sea. Dave enjoyed his time on Unst and his travels were not always unpleasant: "

"I have fond memories of my time on Unst, and eventually after a number of periods of leave, became a good sailor.  My experiences include seeing the Northern Lights, and also the midnight sun at the height of summer.  Less enjoyable were the winds which at times exceeded 100 miles per hour on the top of Saxa Vord Hill, and on one occasion in particular caused snowdrifts that reached the top of the perimeter fence in places.  In the worse weather the road up to the top site would become too difficult and it was not unusual on those occasions to work a double shift.  There was one occasion when going on leave, that the bad weather prevented the Earl of Zetland from berthing at Baltasound and we had to go out into the bay in a small boat and jump aboard the ferry as the waves brought the boats level in what was probably a six foot swell.  Talking of Baltasound, I believe at the time, the Hotel there was the only one on Unst.  I think it was either the first night or perhaps the second that three of us decided to walk to the Hotel for a beer or two.

It was daylight when we left the camp but when we came to leave the Hotel to return ,it was dark, and my, how dark is dark.  We had only consumed a couple of beers, or perhaps three, but were quite sober. However we hadn't realised how difficult it is to see your way when there is no moon and no street lights of any sort.  We eventually made it back to camp but had to virtually feel our way along the road.

There was not a great deal of opportunity for recreation although we did quite a lot of walking to explore the island and some fishing in Norwick Bay were the mackerel were plentiful.

also recall seeing that colourful bird, the Puffin, for the first time, and was quite amused by its appearance. 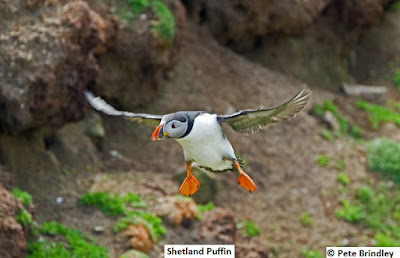 I took an interest in Basketball and represented Saxa Vord in a match against a team in Lerwick, which we won. I can't recall the final score, but I scored two baskets.  We also played football, but in those days it was difficult to find an area big enough and level enough for a decent pitch.  I also recall in the summer of 1958, a sports day was organised and I was part of an RAF Tug of War team who managed to beat a team of islanders, two to one.  I still have the medal."

Dave was actually the RAF anchor man and a picture of his medal is below:

The RAF Police were responsible for manning the guardroom in the Operation Block (Known as the R10). Control of access was particularly important as some of the RAF Equipment and procedures were highly classified and because entry also enabled  entrance to the Admiralty buildings. During 1957/58 a number of classified naval exercises and trials occurred, such as Exercise THERMOSTAT IV. The next picture shows Dave, together with a Land Rover, outside the Ops Site Guard Post: 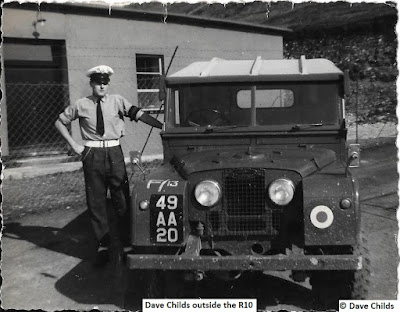 By coincidence, the late Ray "Dickie" Dawson sent me a picture of the same vehicle aboard the SS St Clair showing it being delivered to Shetland: 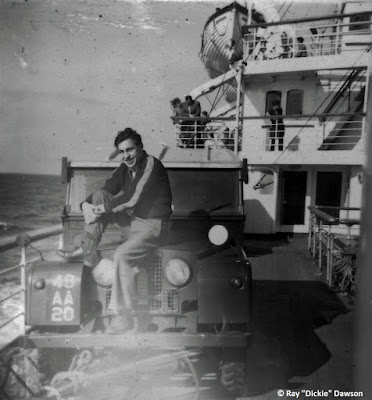 Another Policeman, at Saxa Vord at the same time as Dave, was a chap by the name of Moss Bilson. The next photo shows Moss (bare-chested)and Dave on the shore at Norwick: 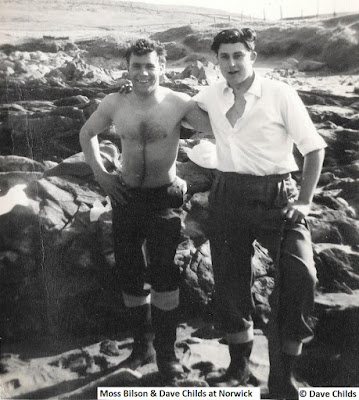 The following picture, also taken at Norwick, shows Dave swimming in the sea, without the aid of a wet suit!: 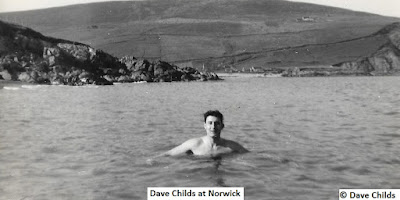 Another recollection from Dave:  "One other incident I recall that occurred during my time there was the arrival of a Russian Fishing Fleet just off Muckle Flugga which caused some consternation.  I photographed what was described as the "Mother/Parent" Ship which for a few days had stationed itself only a short distance to the north, no doubt engaged in some spying activity on NATO's defence system. Over the life of RAF Saxa Vord Soviet vessels showed a great interest in the Station! The picture of a Russian Fishing Fleet north of Unst was taken by Rod Pye a few years later: 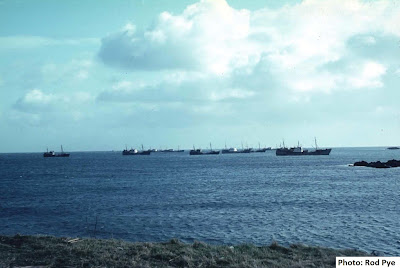 And the next, from David Goodall, shows 2 Russians in Burrafirth below the Saxa Ops Site: 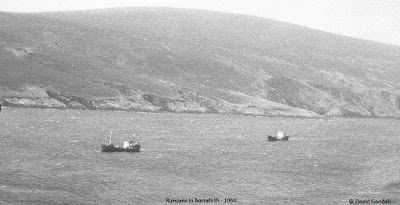 I'd like to thank Dave for sharing his reminiscences and to encourage anyone else with material from the early days of Saxa Vord to get in touch: gordon.carle(AT)gmail.com
CONTENTS LIST
http://ahistoryofrafsaxavord.blogspot.co.uk/2012/03/contents-list.html