In November 1964 RAF Saxa Vord was the scene of a performance by Andy Stewart and Ian Powrie and his Scottish Dance Band. At the Time Andy Stewart was an internationally known artist who had toured the USA & Australia. Amongst other things he wrote the lyrics of “A Scottish Soldier” and recorded it in 1961. The song was a massive hit around the world (incl, USA & UK, where it spent 36 weeks in the charts); total sales exceeded 3 million copies. The show was recorded by the BBC and part of it was broadcast at Christmas that year. Like his music or not he was certainly the most famous entertainer to visit Saxa.

Clippings from 2 newspapers of the period are attached below. I have also reproduced 2 pictures from the RAF Saxa Vord Magazine the "Saxa Voice", which were printed long after the event. (Left click to enlarge) 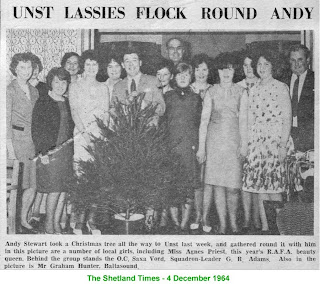 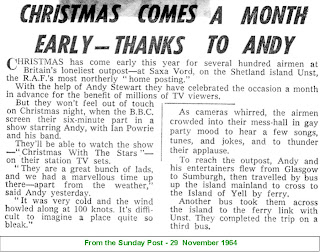 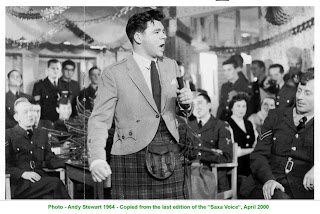 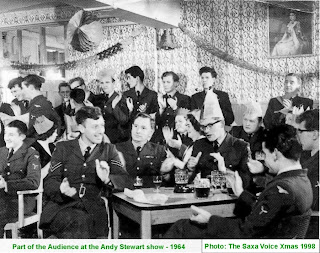 Note 29 Dec 10﻿
It has just been pointed out to me that there is a short excerpt of this performance on Youtube:
http://www.youtube.com/watch?v=0Pj_UeGAIkU&playnext=1&list=PLE6B9652D65A1F35D&index=22