Les White was a cabinetmaker by trade when he was called up for National Service around Nov '60. He trained a Radar Operator and was posted to Saxa Vord early in 1961. In this period National Servicemen were required to serve for 18 months, followed by 4 years on the Reserve. Les spent  most of his call-up at Saxa. (Left click on pictures to enlarge). 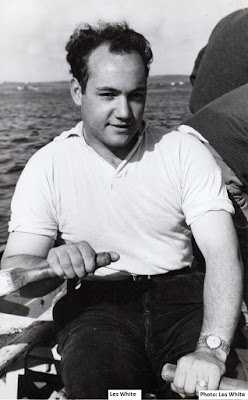 With his background Les was well-suited & selected by "the Boss" - Sqn Ldr Harris, for the job of getting the station cinema up and running. Prior to his arrival films were shown in the Airmen's Mess. The building, which was to become the Ice Cap. was one of the last Domestic Site buildings to be completed. The picture below from David Goodall, was taken in 1960 and shows it still under construction: 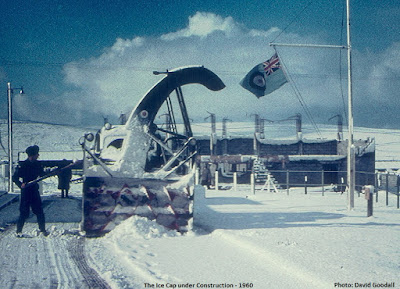 By the time Les arrived the outside of the building was complete: 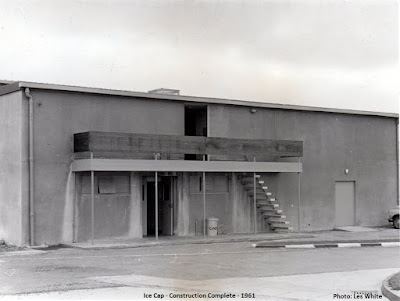 One of the first tasks was to obtain suitable seating for the new cinema. It was arranged for the seats from a derelict cinema in Edinburgh to be shipped up but ,when they arrived, they were found to be  in a sorry state. Les  ordered new material and when it was delivered it was Les's job, with some help from a fellow SAC, Arthur Young, to re-upholster them: 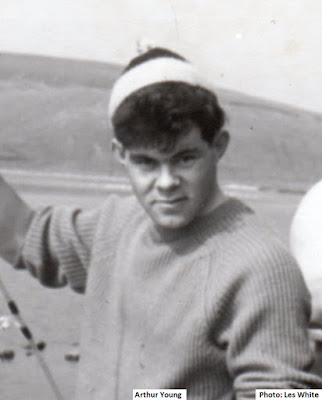 Once they had  completed the seat renovations Les & Arthur fitted them into the new cinema building. 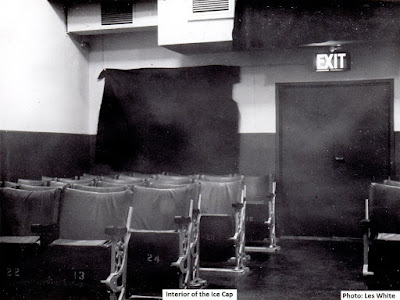 They installed the two 16mm projectors, the wide screen and the sound system. 'Egg trays were glued to the rear wall to aid the acoustics' 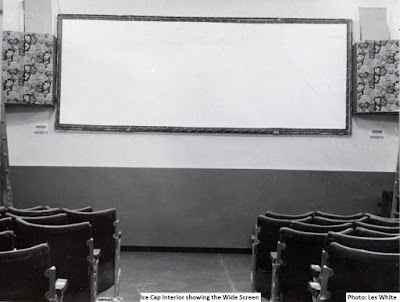 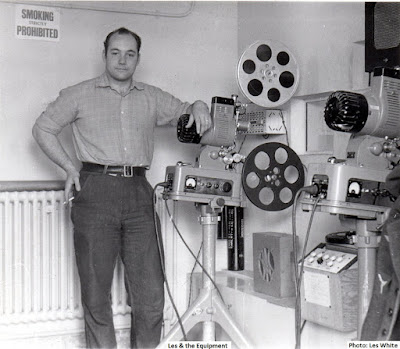 Les & Arthur were also responsible for naming  the  cinema "The Ice Cap" and for painting the exterior Ice Cap & Penguin on the sign outside: 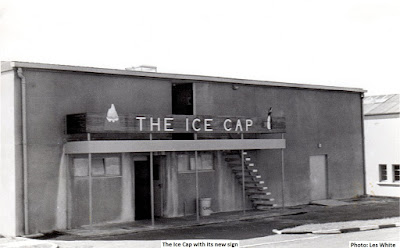 The films shown  were the 16mm versions of whatever was going round the main mainland cinemas at the time. The shows were well attended by servicemen & locals, RAF personnel were charged 2 shillings and the locals were charged half a crown - a fair bit of money in those days! Les trained a couple more lads as projectionists, essential to provide continuity as many of the RAF were watch-keepers. A few more photos from Les of the cinema & equipment follow: 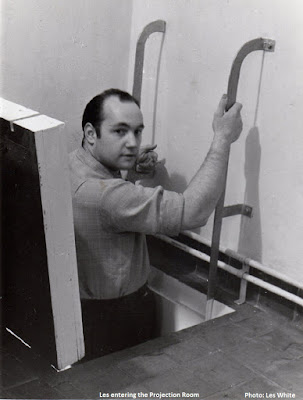 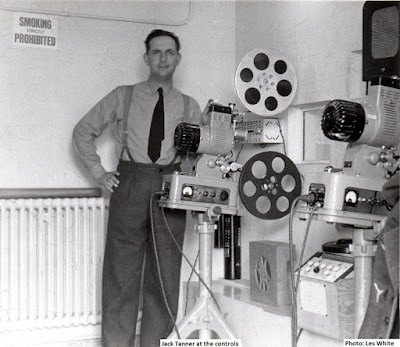 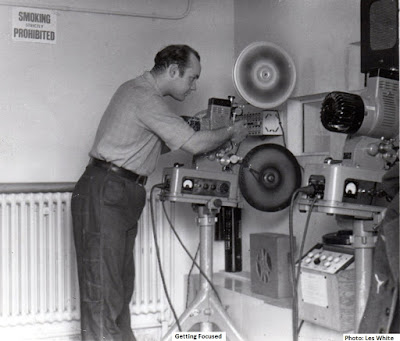 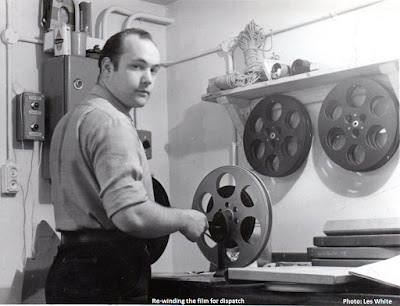 Les was not confined to work and the Ice Cap, he seems to have had a pretty active tour. The Station Accounts Officer, John Courtis, had decided to assemble a sports car from a kit during his tour (see: http://ahistoryofrafsaxavord.blogspot.co.uk/2014/07/john-courtis-saxa-vord-1960-62.html). Because of his skills and experience as a cabinetmaker John asked Less to help with the work. 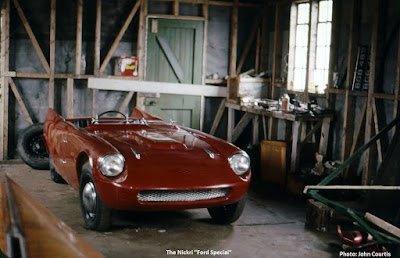 Les remembers, "It was a red sports job I seem to recall. I had the task of forming the floor panels and on the driver's side it was quite complicated as there had to be slots for the pedals. These were at different angles and travels but I eventually got there. It was the kind of job I enjoyed"
Another of his main pursuits was fishing, both freshwater for trout and saltwater for anything that was available. The Three photos which follow were taken by the Loch of Cliff, the first shows the search for something to tempt the fish with,  the second shows the lads getting ready for battle and the third is of Jack Tanner (with Arthur Young and Les White just visible on the left): 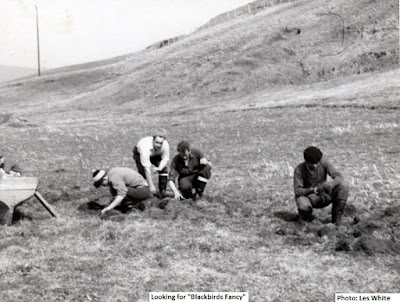 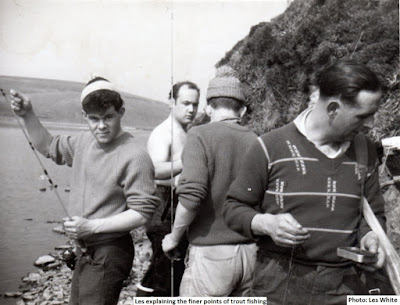 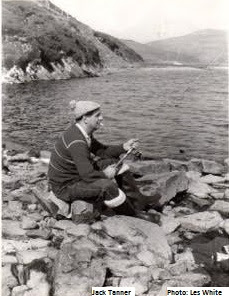 I don't know how much success they had and, judging from Les's salt water experience , I suspect their luck was mixed! The next picture shows a Station boat being launched: 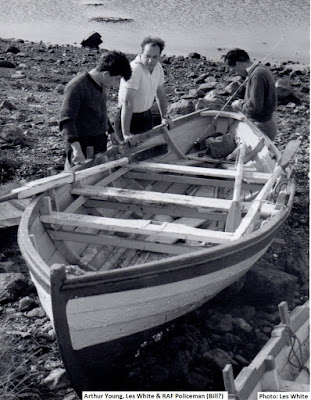 A creel is lifted in the hope of finding a large lobster or two! 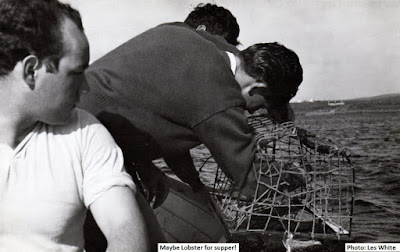 Better luck next time! - on this occasion the catch was returned to the sea: 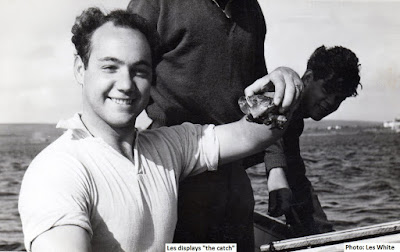 There were better days such as the one in Aug 61 when a trip to Harold's Wick produced a fine catch for the cookhouse to deal with: 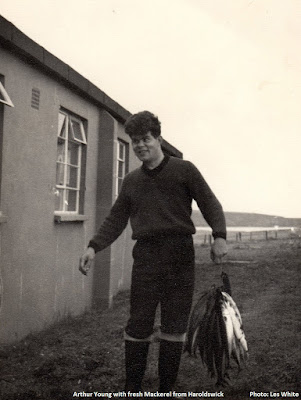 Les had a couple of other pastimes which kept him busy."Amongst other things I did marquetry, I had done since I was an apprentice cabinet-maker. I took the precaution of taking a case full of veneer to the camp, the difficulty was getting suitable board to mount the pictures on. I'm afraid one or two unused lockers were later to be found to be missing their back". Fortunately for us one of his other hobbies was photography: " One must bear in mind photography was an expensive hobby, especially to us poor underpaid types. Whilst we did our own developing and printing ti would still cost about two shillings a print".


A three mile walk sounds a reasonable stroll for fit young men but when you experience Shetland winter weather and then add the three mile return trip it's a different thing. Les and some of his mates decided to pay a visit to Skaw - the most northerly inhabited house in the UK: 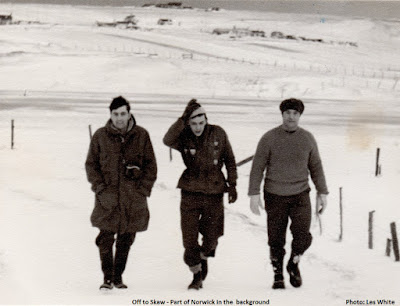 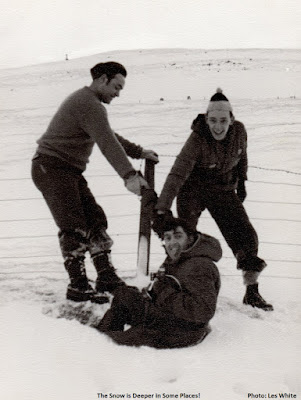 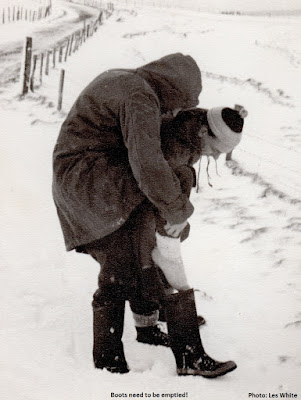 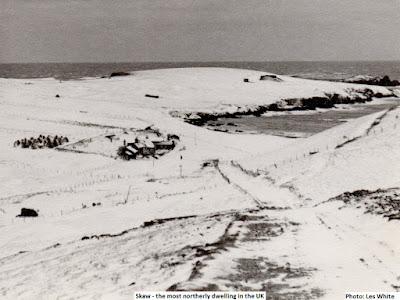 In the photo above the headland in the distance was the WWII site of the RAF Skaw Remote Radar Reserve  (CH) and later AMES 713 LORAN unit. The two buildings close together near the far end of the headland were a Piquet Post and a Power House.