Tony Sparkes had a memorable introduction to life in Shetland. He left Aberdeen on the MV St Clair on 30 Dec 63 and arrived in Lerwick the following morning.  (Left click on pictures to enlarge): 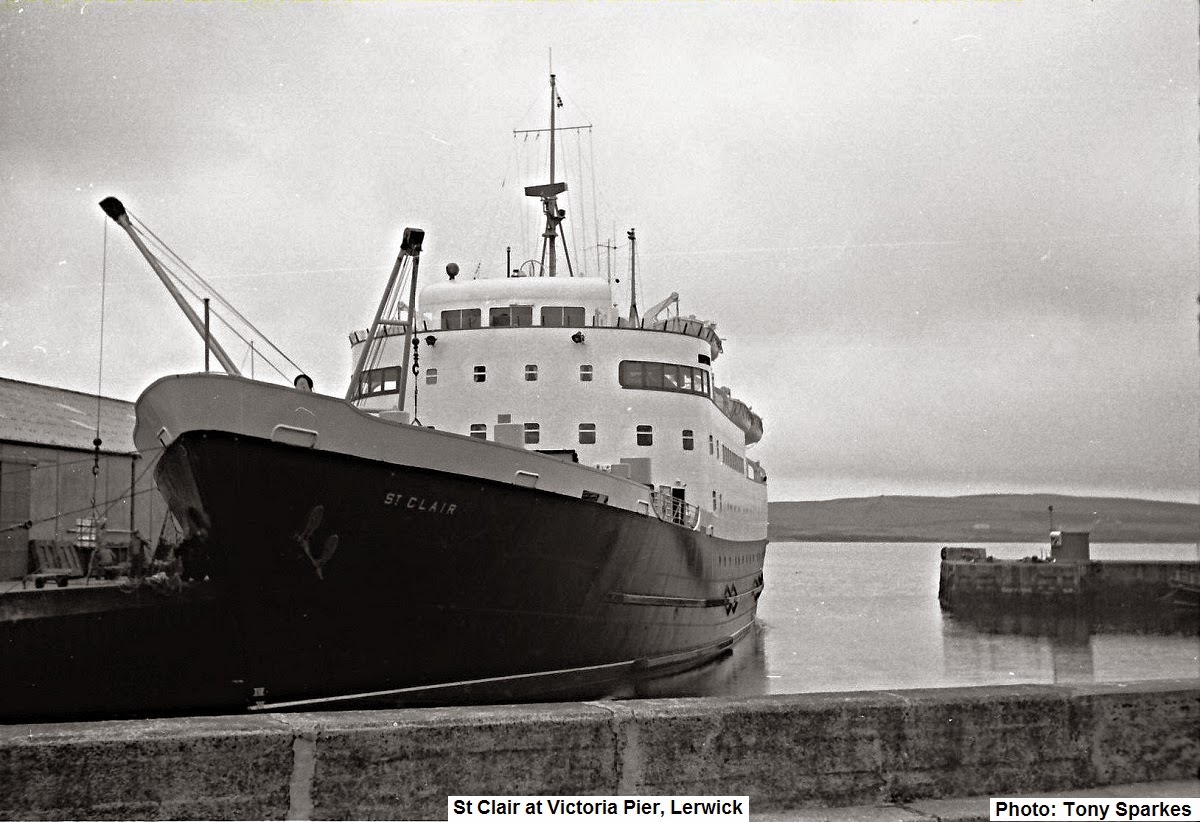 He describes his first day in Shetland - "A dark wet quayside in Lerwick was my first view of the islands and then, in those days a visit to the local travel agents (Leask’s) to collect tickets for the ‘overland’ was required, I was surprised that not only did they know who I was as soon as I walked through the door but also where I was going to work and how long I was there for. A trip across the islands in the half-light resulted in an arrival late afternoon at Saxa Vord, just in time to be given a place to sleep before it was time to join the New Year celebrations in the NAAFI. I can still vaguely remember being introduced to the Station Commander Sqn Ldr Whiley (very popular CO) about 3 o’clock in the morning after consuming several cans of ‘Red Cap’ surrounded by most of the rest of the camp personnel who were celebrating New Year in typical style, and that was my introduction, and apart from sleeping, my first day at Saxa Vord."
At the age of 18 it must have been an interesting experience. For the next year and a half Tony worked at Transmitters on the Ward of Norwick, with occasional visits to Receivers on Sothers Field. The climate of Unst ensured that his work was not always of a technical nature: 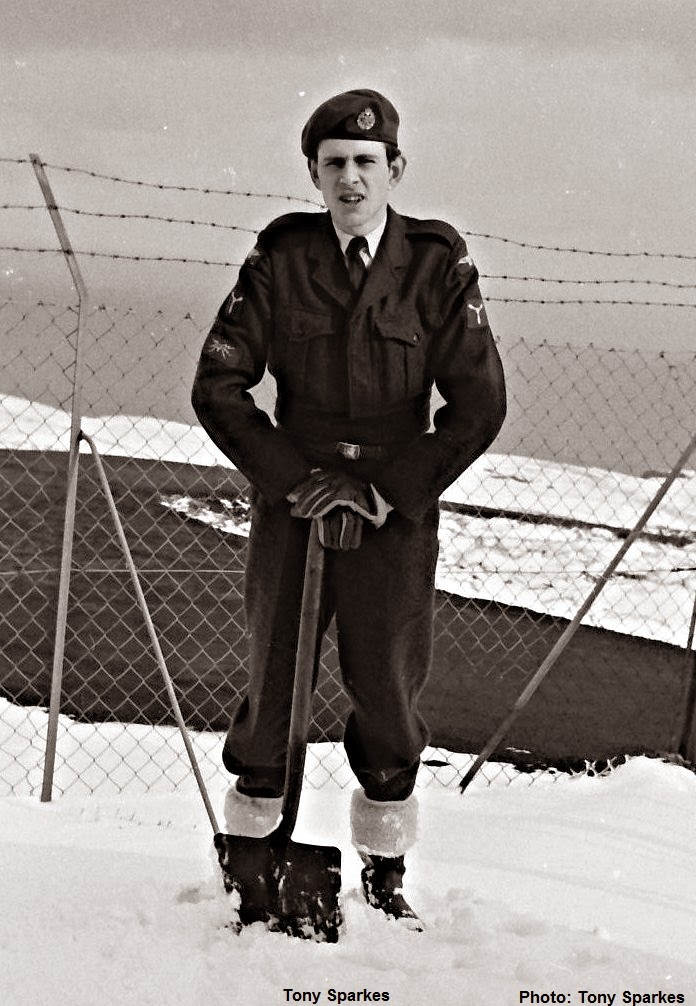 A few of the photos he took from Transmitters & Receivers are shown below, the first is looking NE towards Outer Skaw: 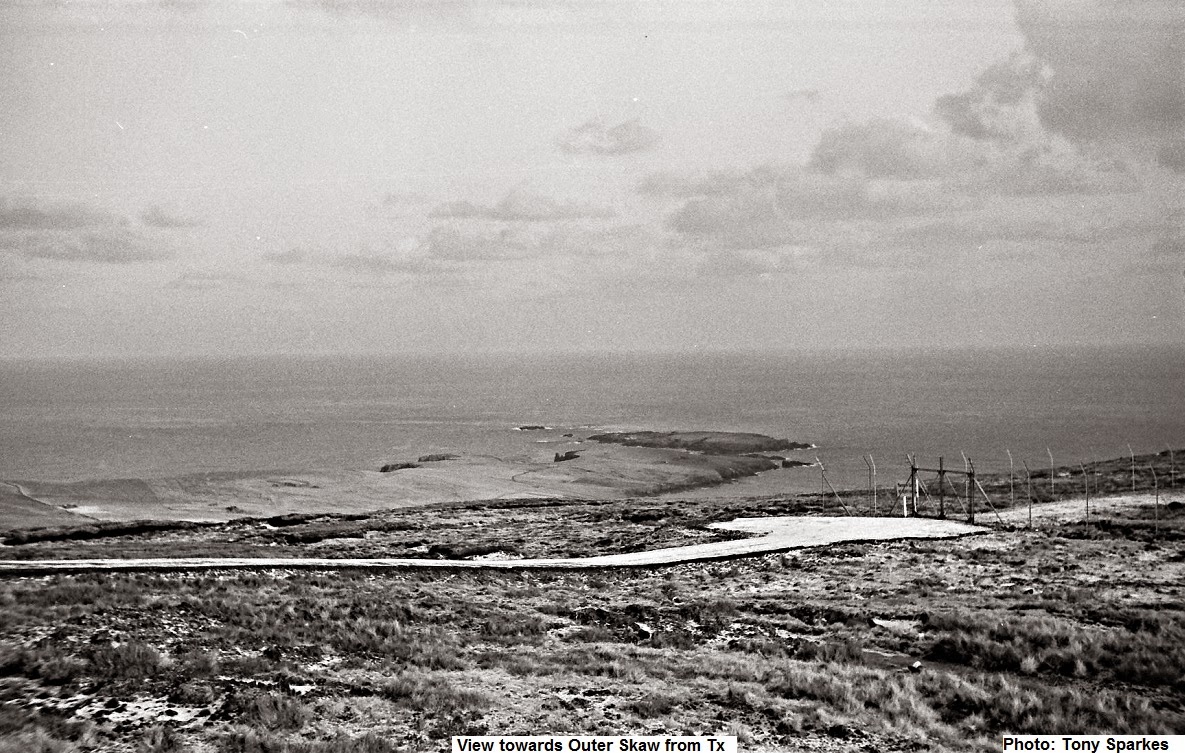 The next is looking in the same direction but on a slightly colder day: 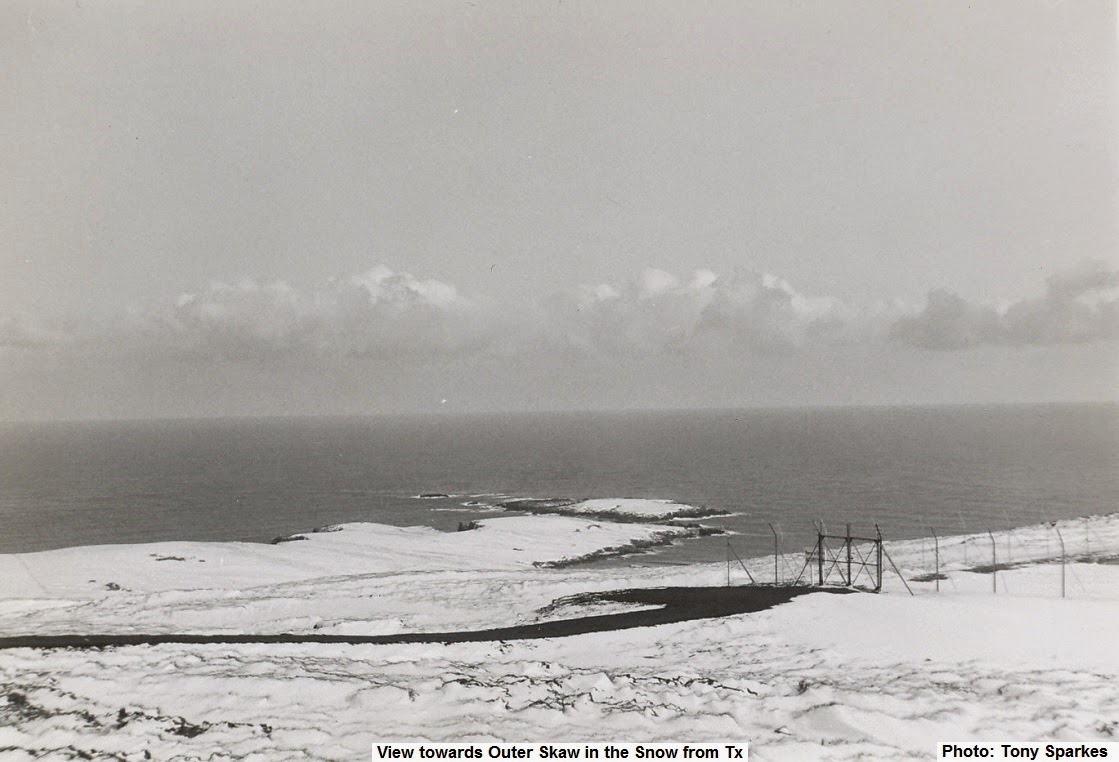 This next photo was taken looking a little more to the east and includes the old GPO building, which was extended in the early 70's to include Radio Norwick: 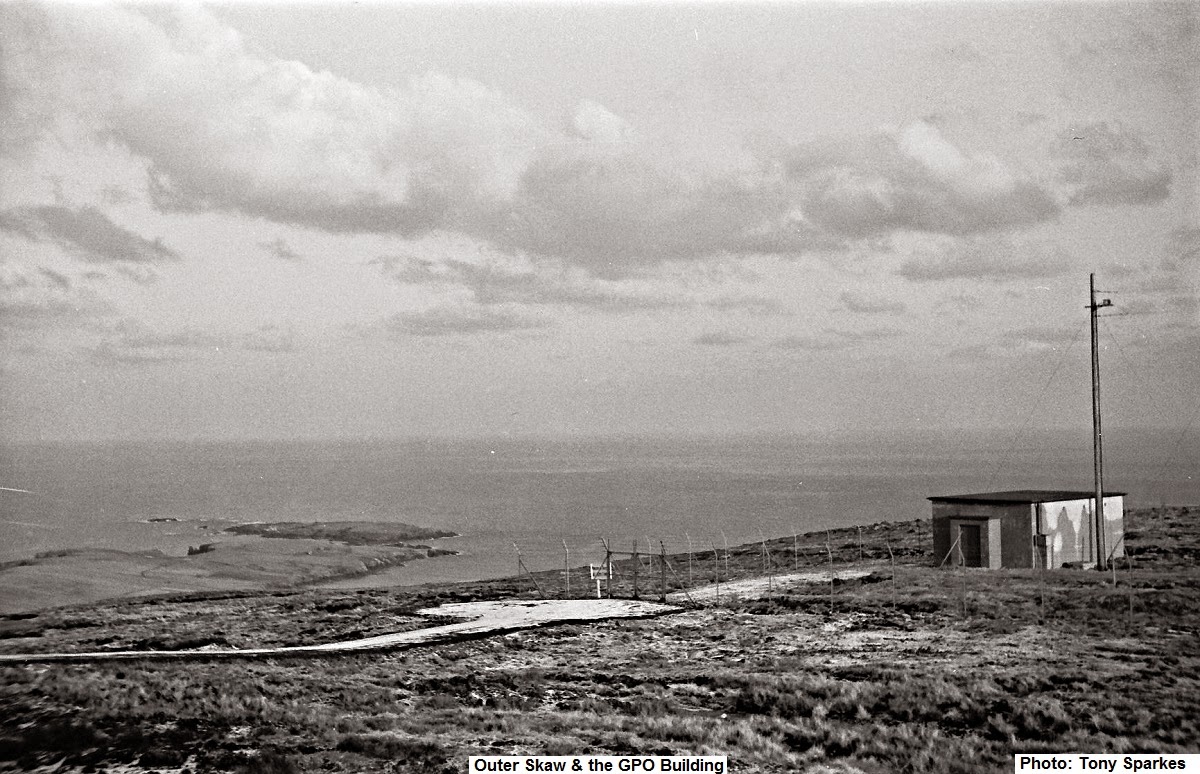 The hill on the right in the following picture is Clibberswick (525'),  which is to the SE of Transmitters: 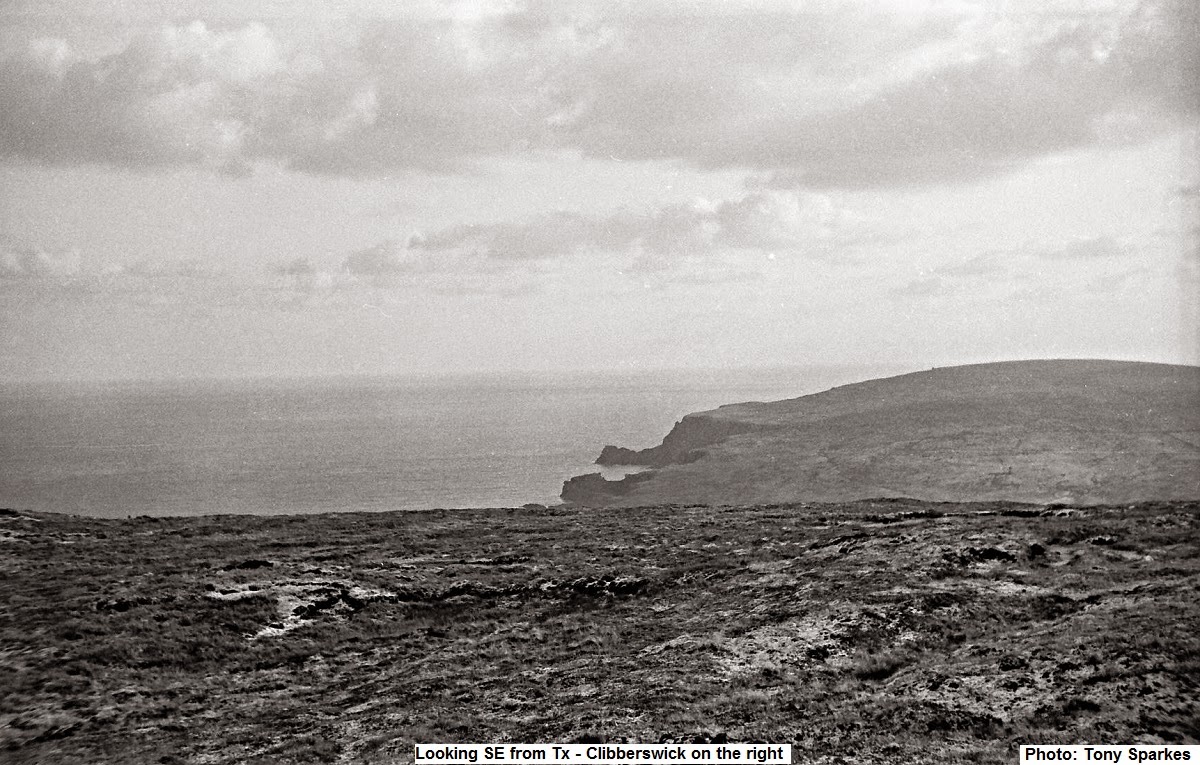 Hill Ness can just be seen just to the right of centre in the next photo, which was taken a short distance to the east of Receivers, looking NE: 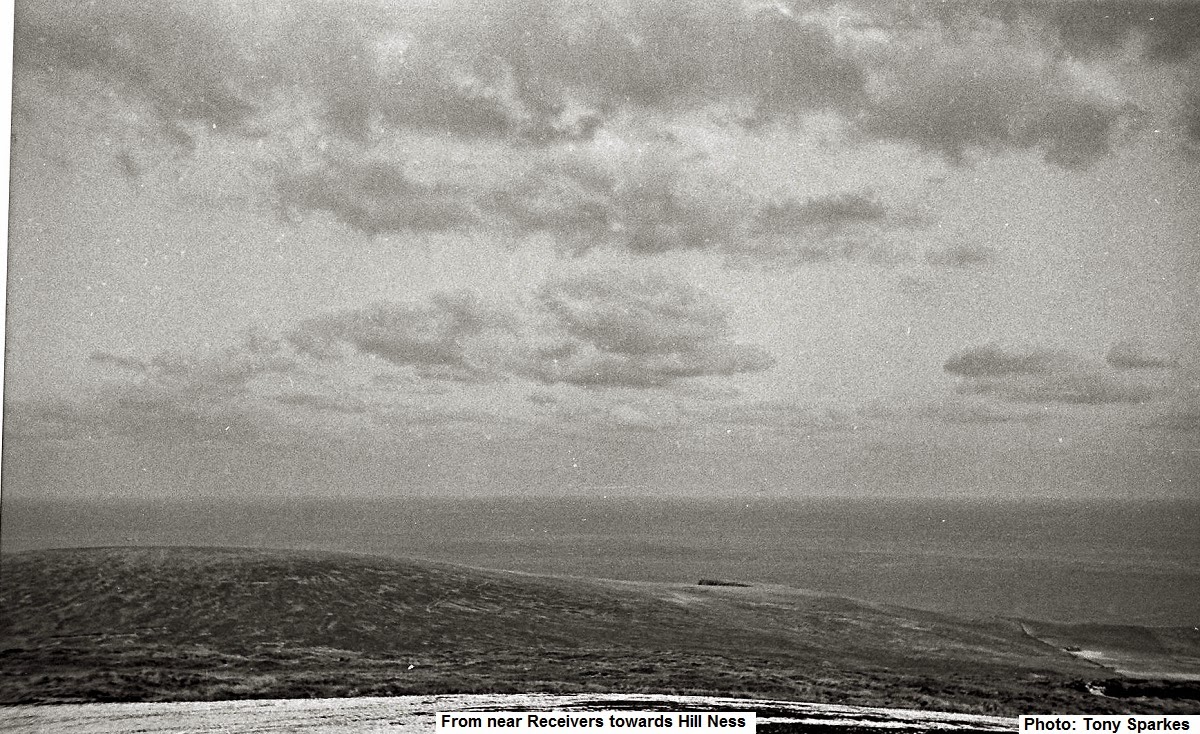 The next shot shows the top of Saxa Vord with the then recently completed Type 80 Radome: 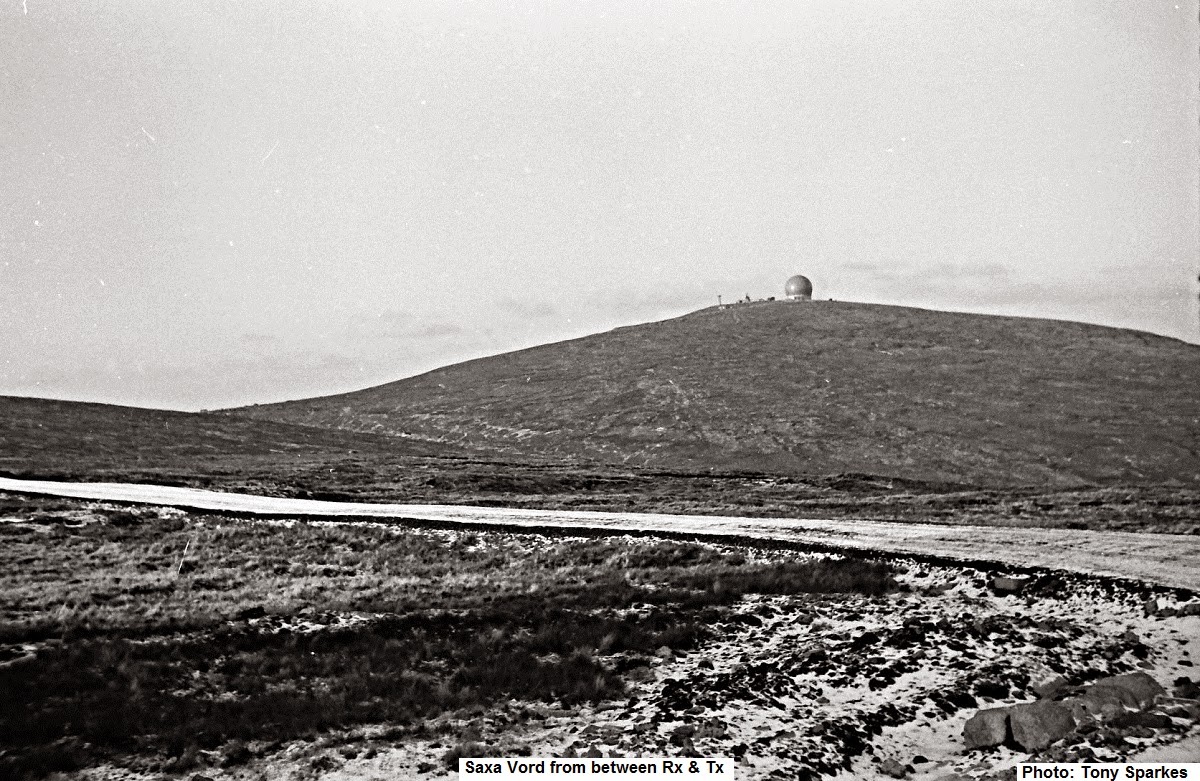 The next group of Tony's photos show the Ops Site and a few views from the road up the hill, they were possibly taken during a watch changeover. The first shot was from just outside the gates of the Ops Site and shows the SE corner of the Site and the view towards Muckle Flugga: 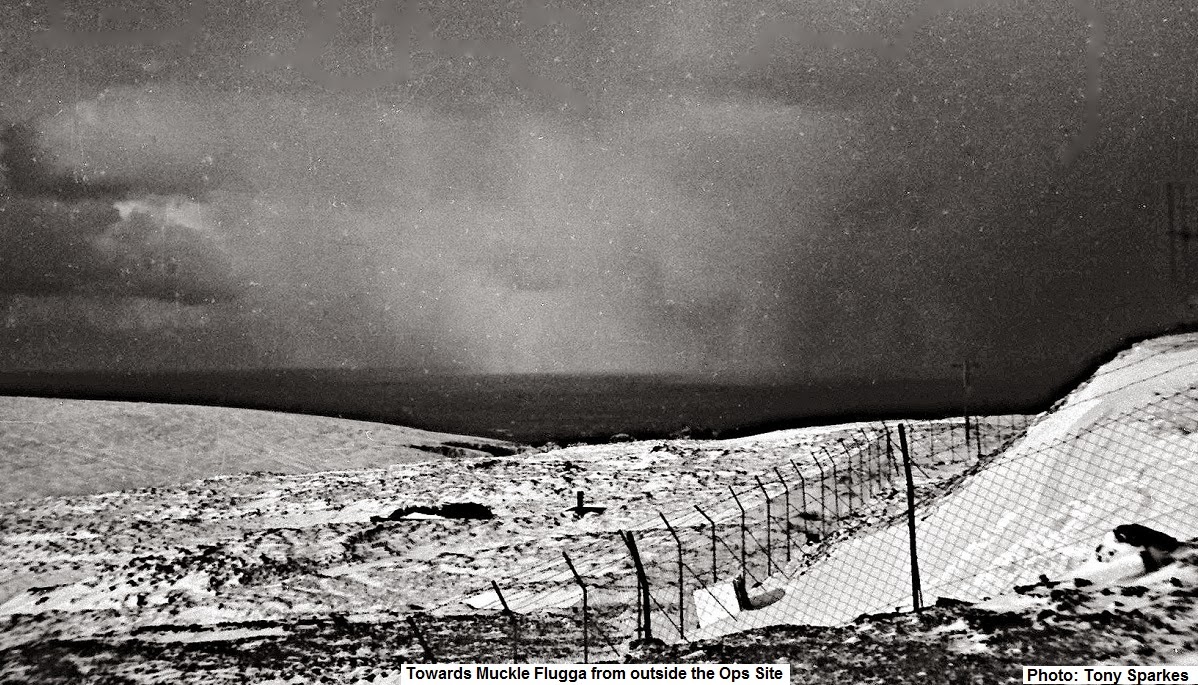 The next shot was taken from close by, looking south towards Burrafirth and Loch of Cliff. Local peat banks can be seen in the foreground: 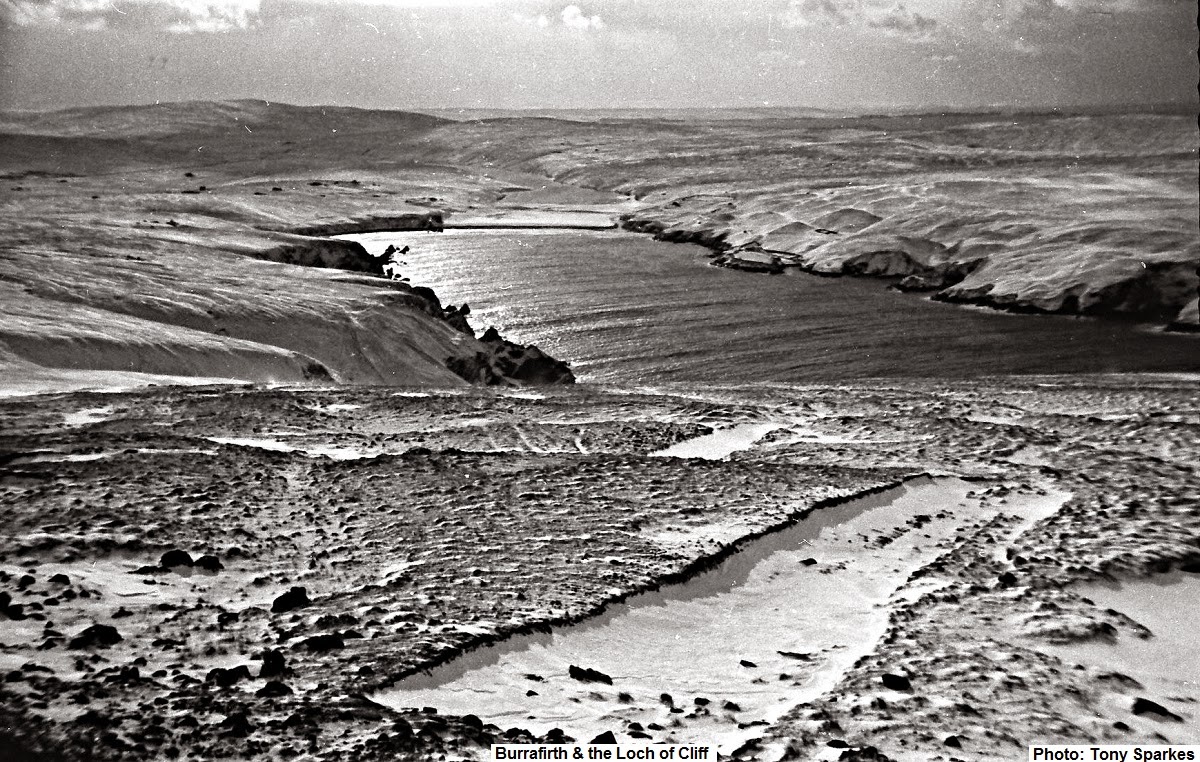 Two pictures taken from just outside the Mid Site and show the road up to the Top Site and the radar heads, a Land rover disappearing into the distance: 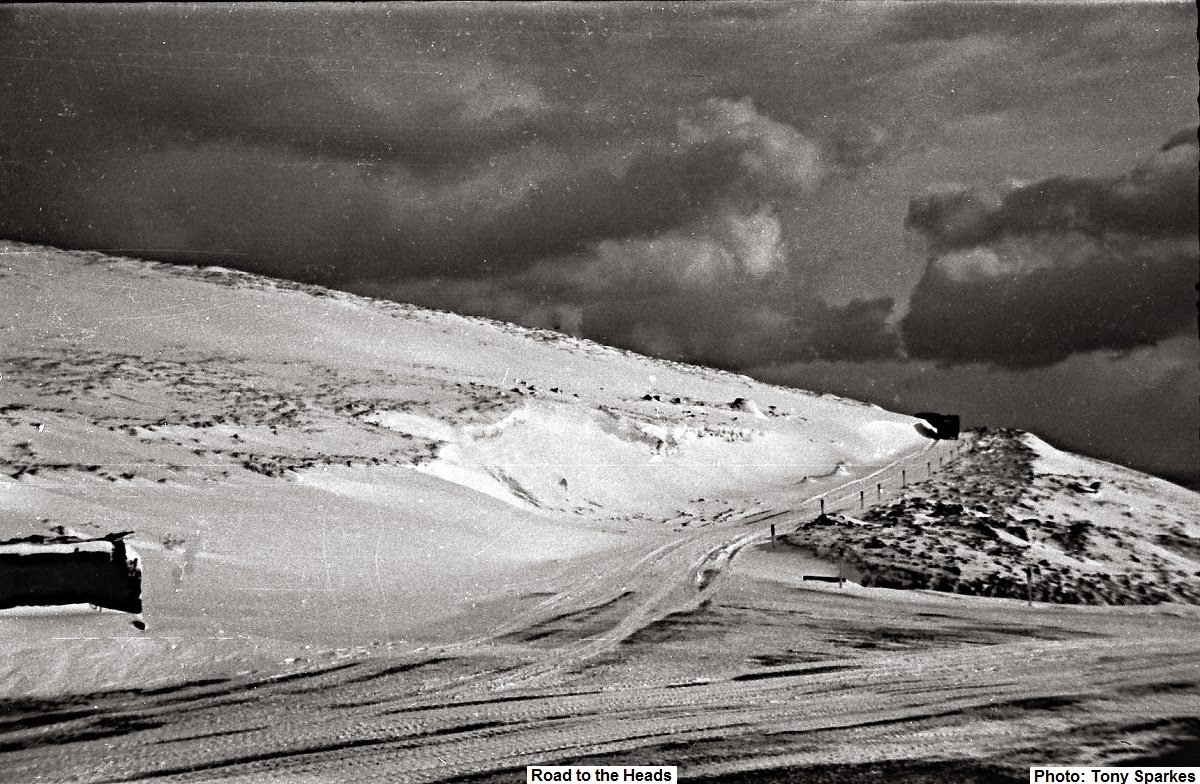 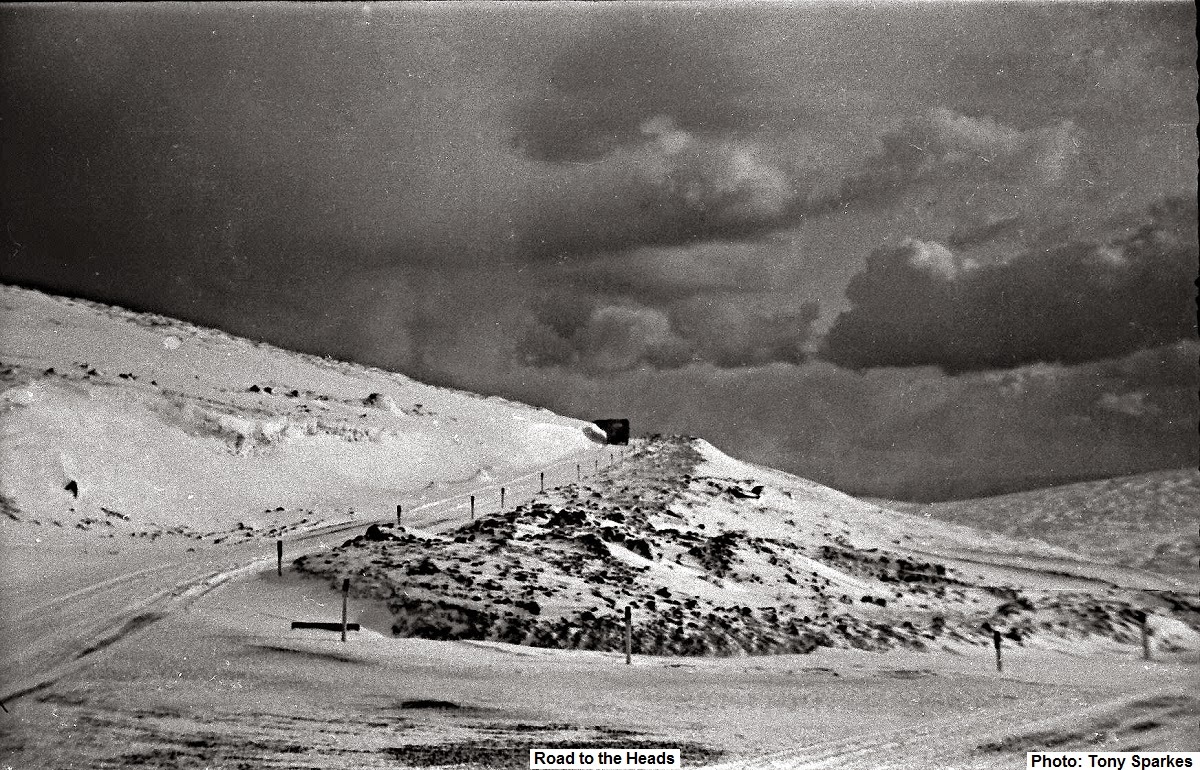 The following photo was taken near the turn-off to Receivers and Transmitters looking across Burrafirth towards part of Hermaness. The small valley in the centre of the picture is that of the Burn of Winnaswarta Dale, which flows into Burrafirth just north of Fiska Geo - which can be seen to the left of the Burn: 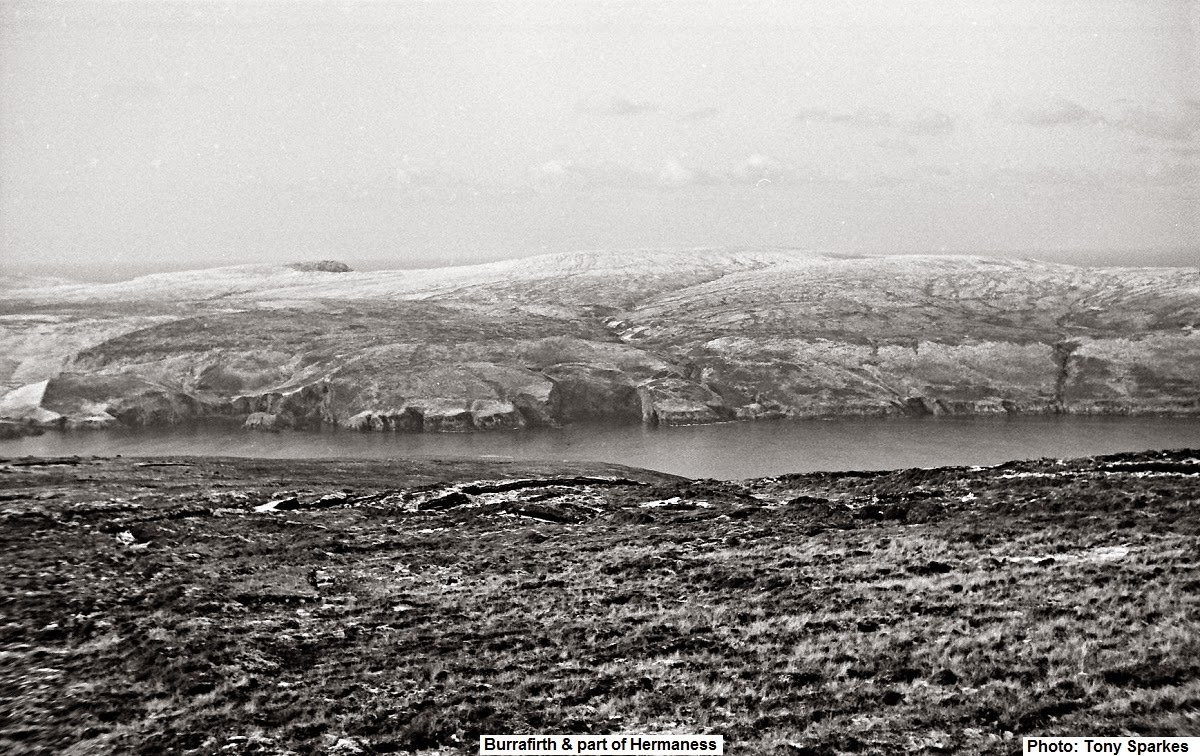 The next view of Hermaness & Muckle Flugga was taken from a little further down the hill, just north of a rock feature known as "The White Haggle": 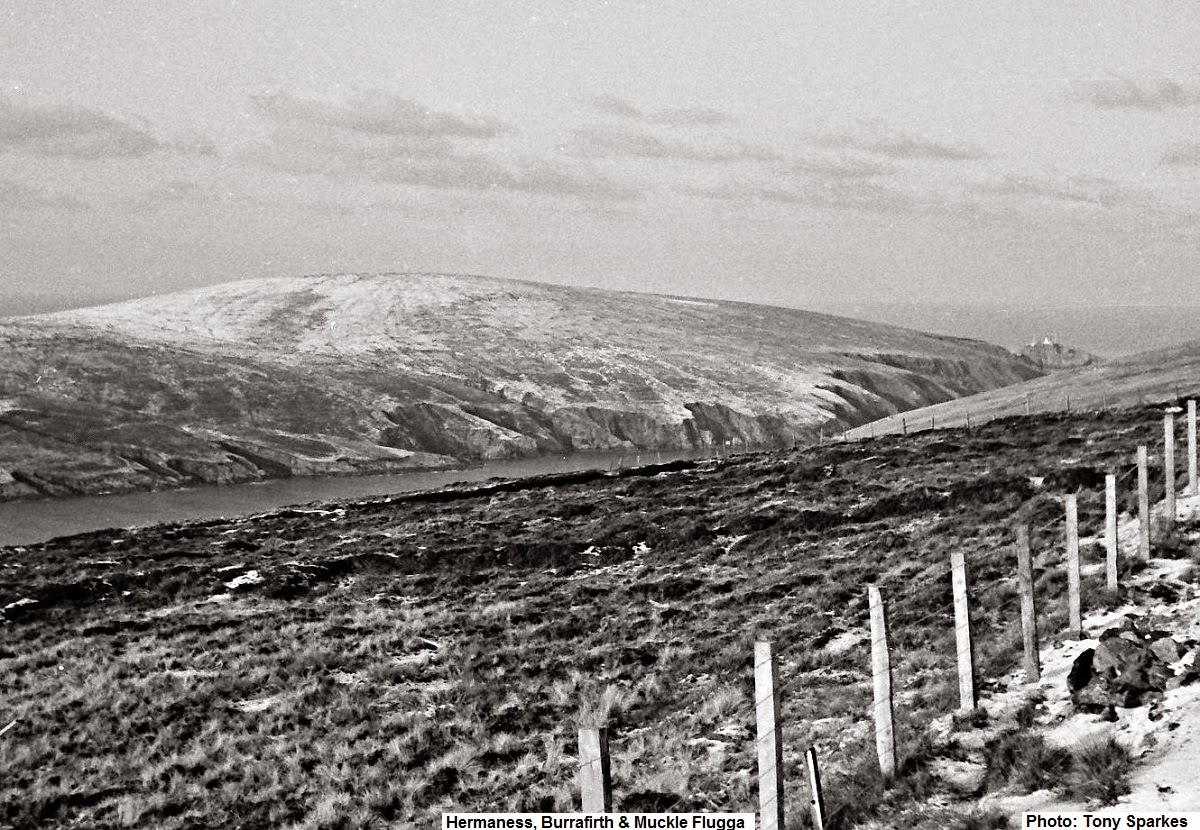 In much of mainland UK there was a massive surge in the sale of Television Sets just before the Coronation in 1953. The sale in Shetland were not affected by this event. In fact TV didn't arrive in Shetland until 15 Apr 64, when a new transmitter on Bressay started relaying a single BBC channel. The signal was available in Unst when you were lucky! Tony remembers "reception was very ‘hit and miss’ and that was if the relay transmitter was on the air. If it failed somebody had to come up from Aberdeen to fix it. Where the locals acquired their first televisions from I’m not sure but some of them were very antiquated even from those days and several appeared at transmitters for us to try and fix. (it is interesting to note that this was also the year of Andy Stewart’s visit, a coincidence or the good old BBC playing politics even in those days)"
Although Tony's first trip from Scotland to Shetland was on board the St Clair, subsequent return journeys were made in British European Airways Handley Page Heralds.  The next picture was taken from one of these aircraft when it was on the ground at KIrkwall in Orkney. 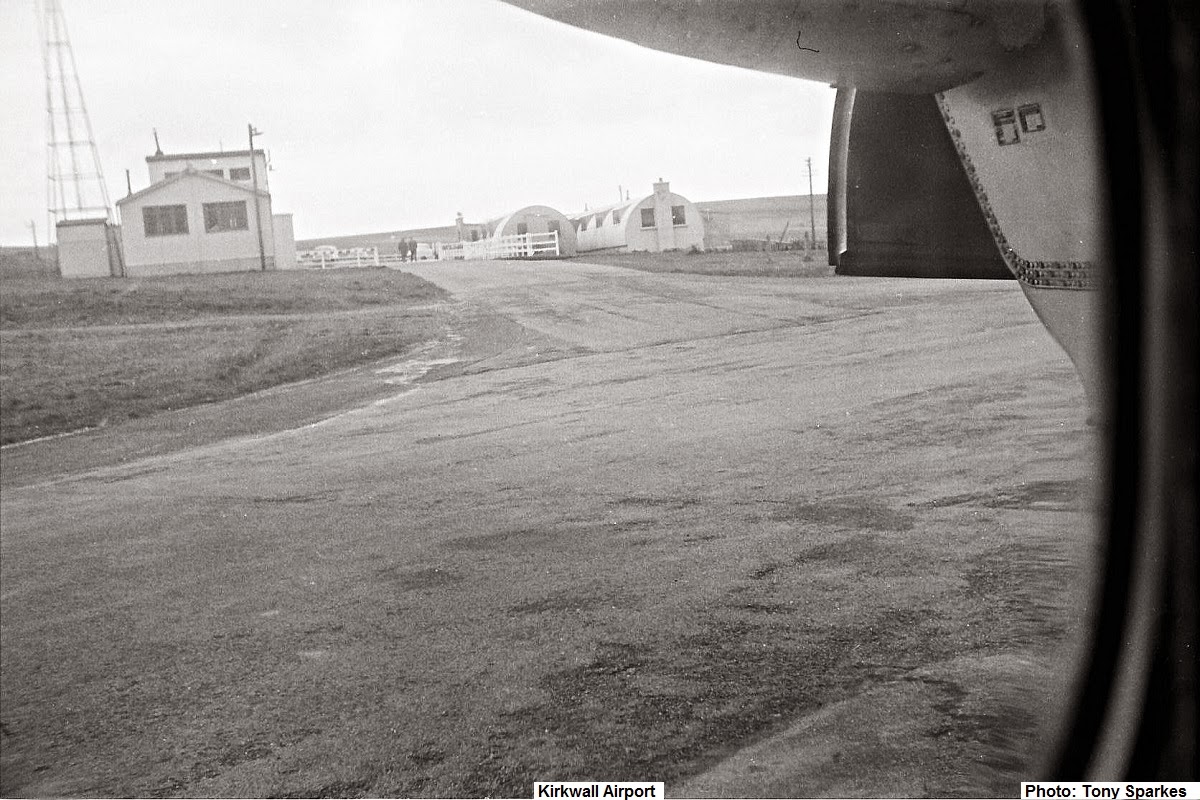 The next two were taken at Sumburgh 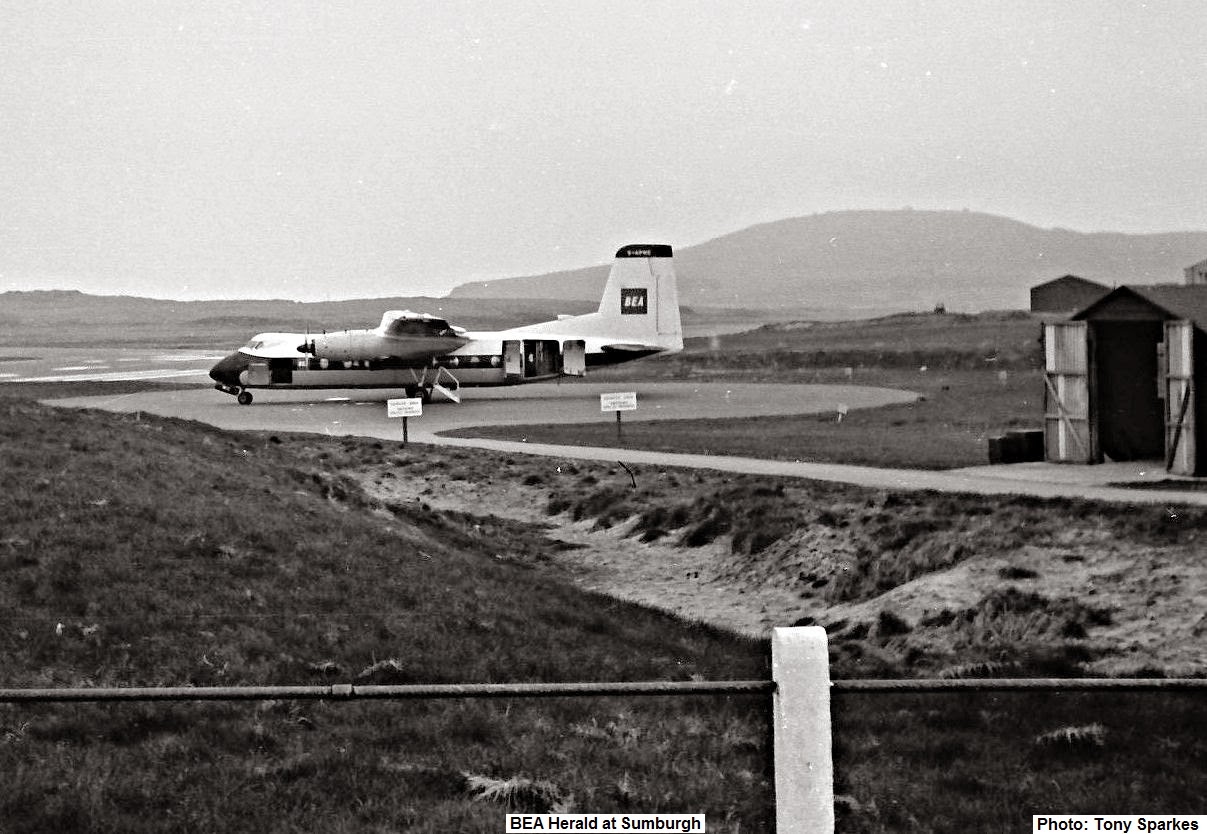 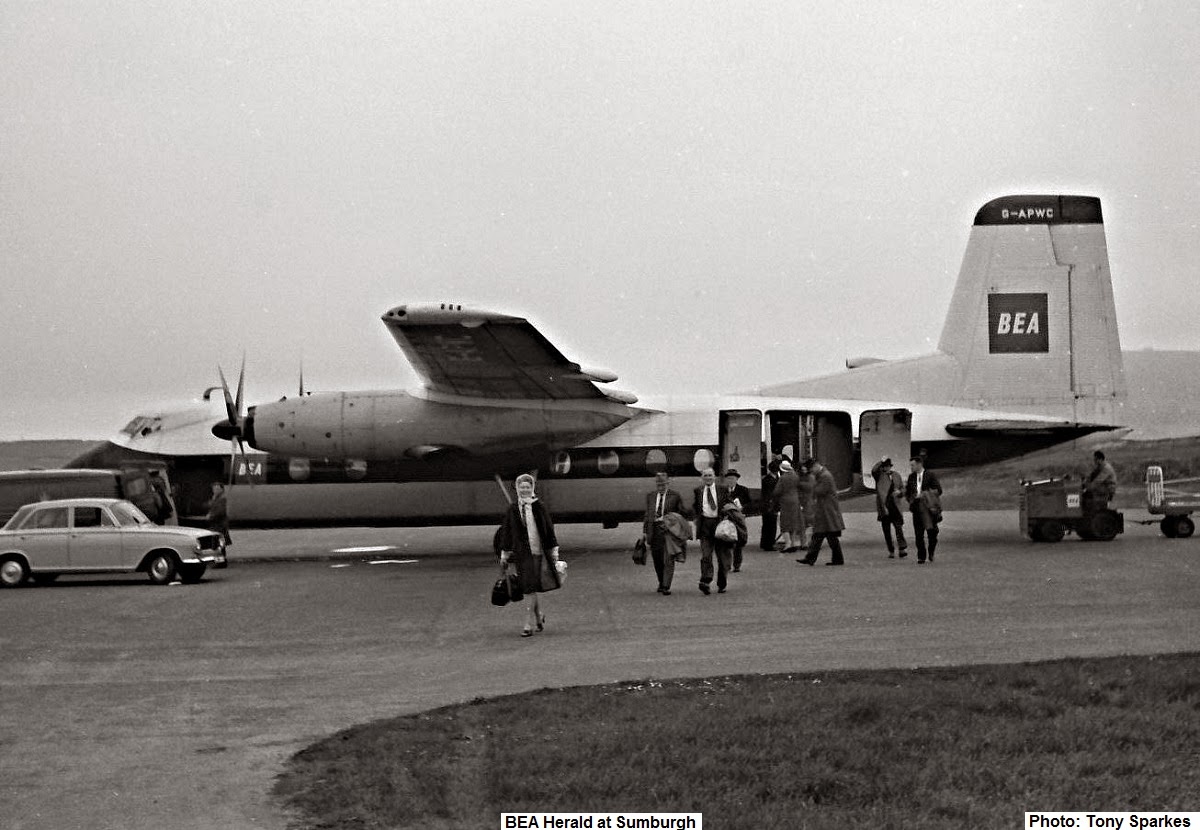 Heading north from Sumburgh it was the well-known overland trip, familiar to many servicemen at Saxa before the RoRo Ferries were introduced in the early 70's. Firstly, Lerwick (for those with an interest in the fishing industry, LK509 was the Jessie Sinclair, a seine-netter): 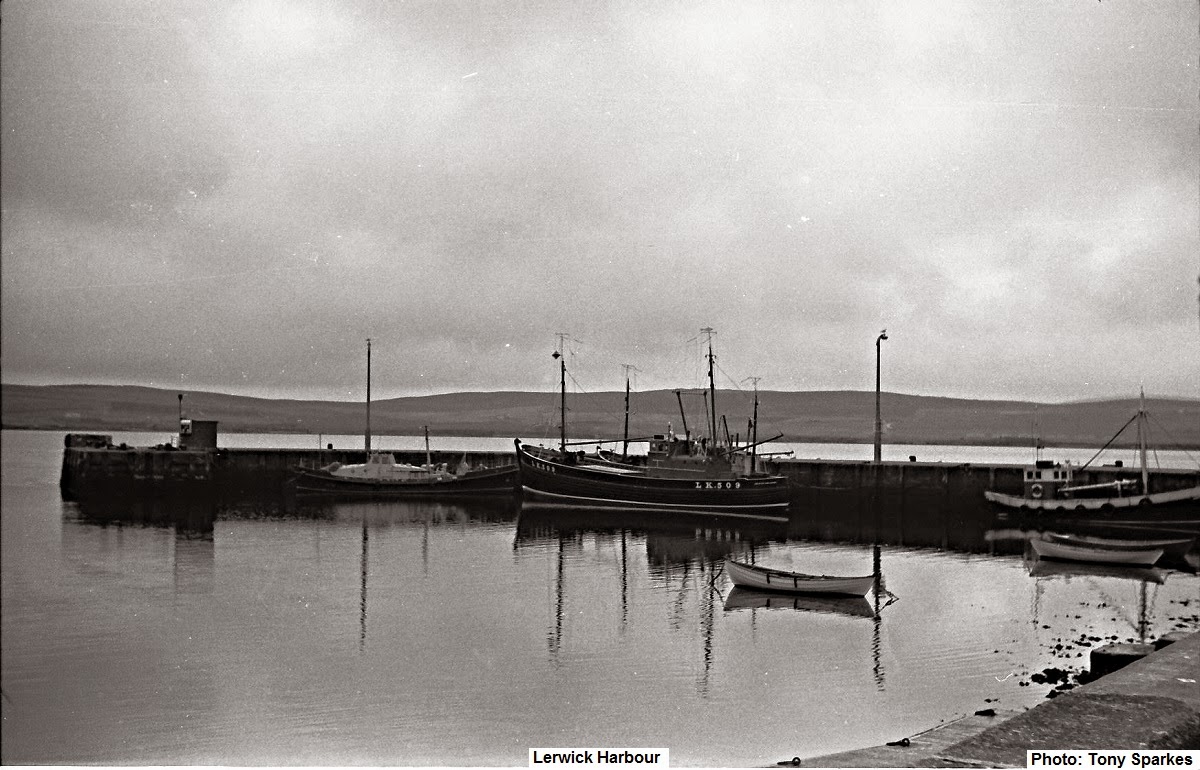 and later on, the crossing of Yell Sound: 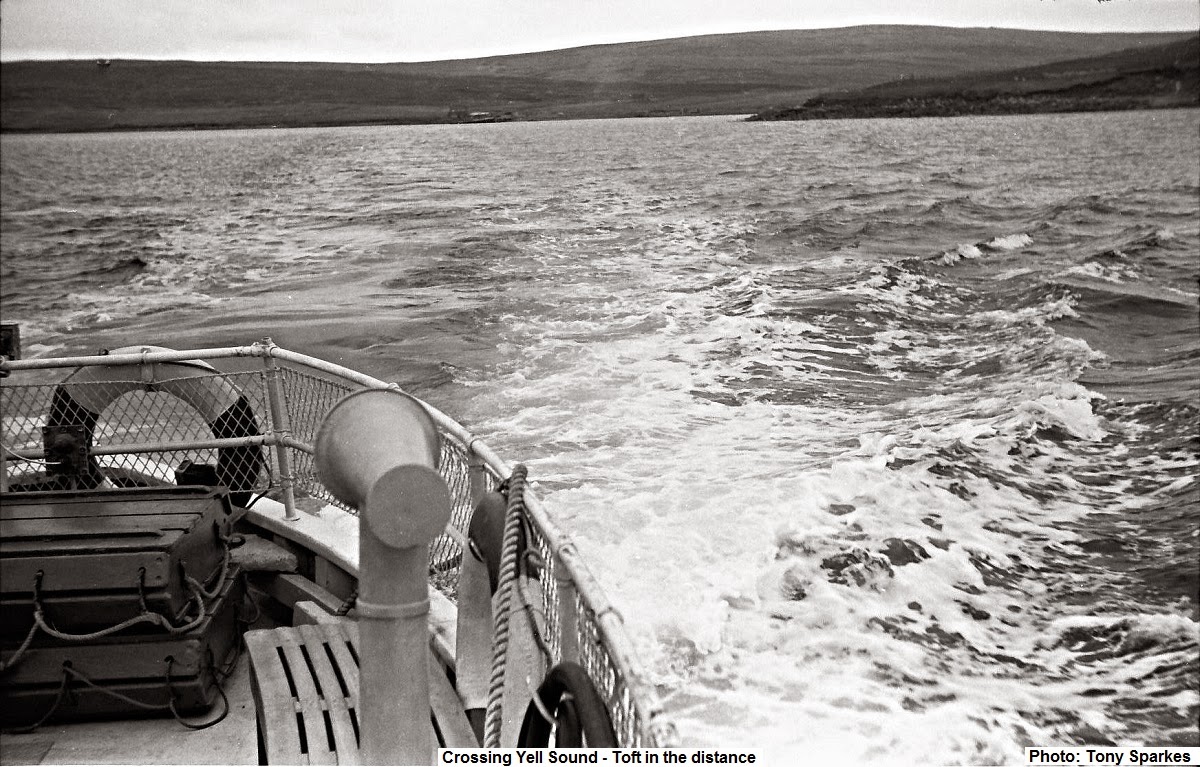 arriving at Ulsta about 20 minutes later where, hopefully, there was a coach waiting: 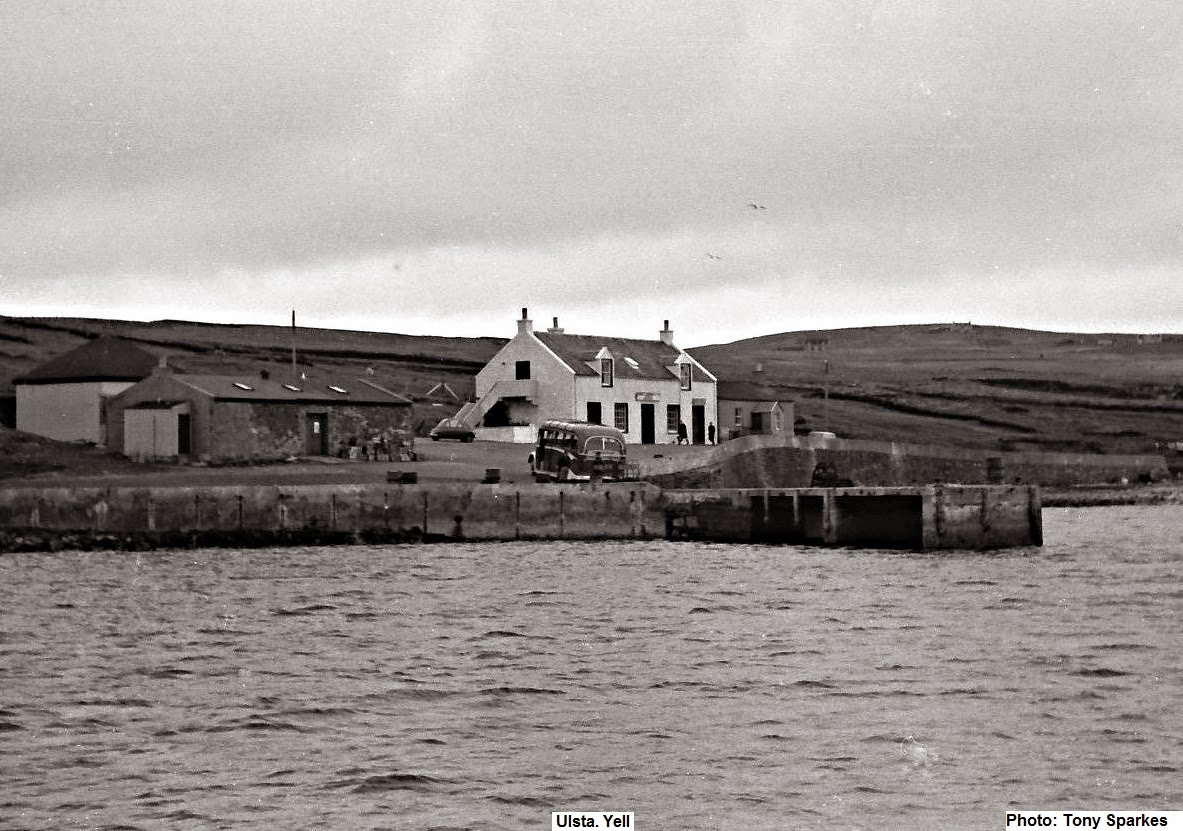 The coach would transport you to Mid Yell, where it was necessary to decant & transfer to another bus. The Earl of Zetland, which delivered cargo and passengers between the islands occasionally called at Mid Yell: 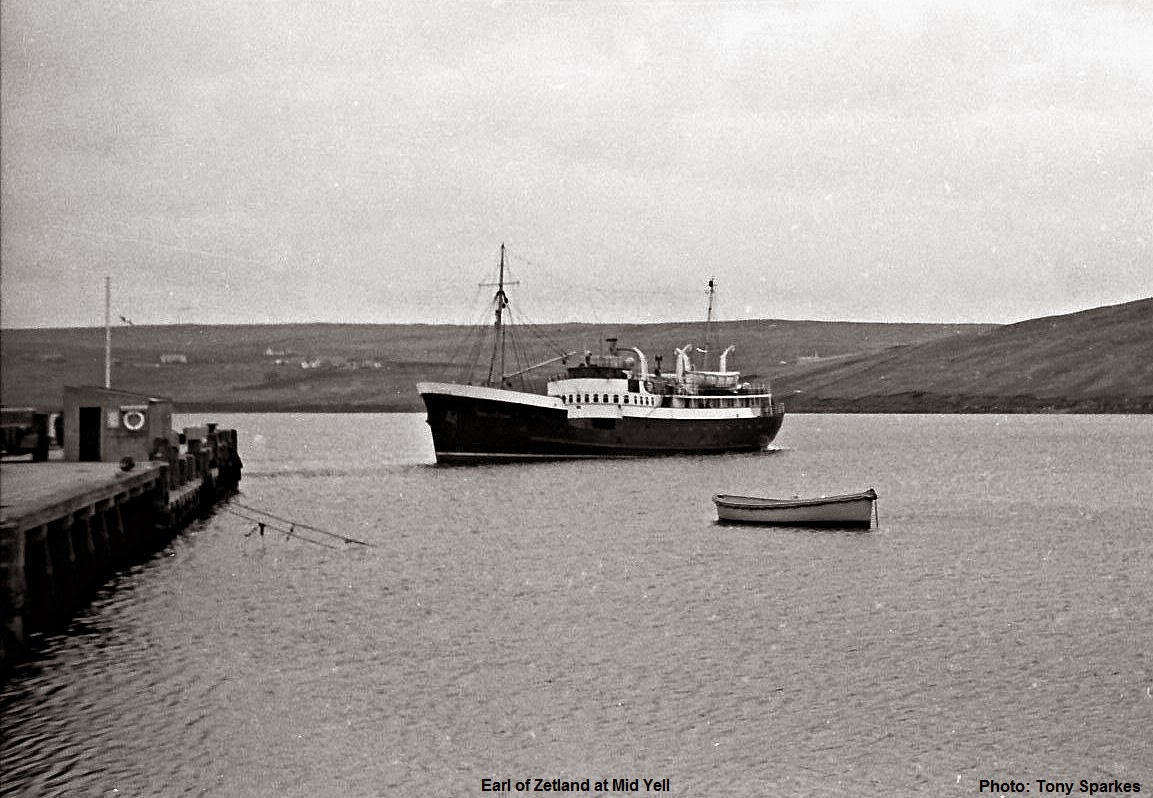 The new bus would take you to Gutcher, near the north end of Yell. From there another small ferry would transport you across Blue Mull Sound to Unst (for more of the overland see: http://ahistoryofrafsaxavord.blogspot.co.uk/2011/09/overland-part-2.html).
Tony also remembers what was possibly the first Rugby game on Unst. Although some rugby had been played in Shetland in the 19th century, participation amongst the locals had ceased until 1972, when the Lerwick Rugby Club was formed. Saxa didn't have the manpower to send 15 men teams to the UK mainland with the travel arrangements as they were, so this first game would have been between sections. In Tony's words, " What was I suspect the first rugby match to ever be played on the island. That must have been in 1964, it was played at Burrafirth and we had to chase seals off the pitch before we could play and it you kicked the ball into the water you went and got it out! I don’t think the locals could believe what they were seeing."
Saxa had a Skittle Alley for most of its life, though it was not always the same one - new ones were constructed and older ones were refurbished. Tony can remember that there was one opened, probably early 1965, in a building round the back of the Ice Cap.
Tony also took a number of pictures of the Domestic Site and its surroundings. The first two were taken in the winter months. This one was taken from the area of the Billets towards Lambaness and the hill up to Skaw (known as "The Floggie"): 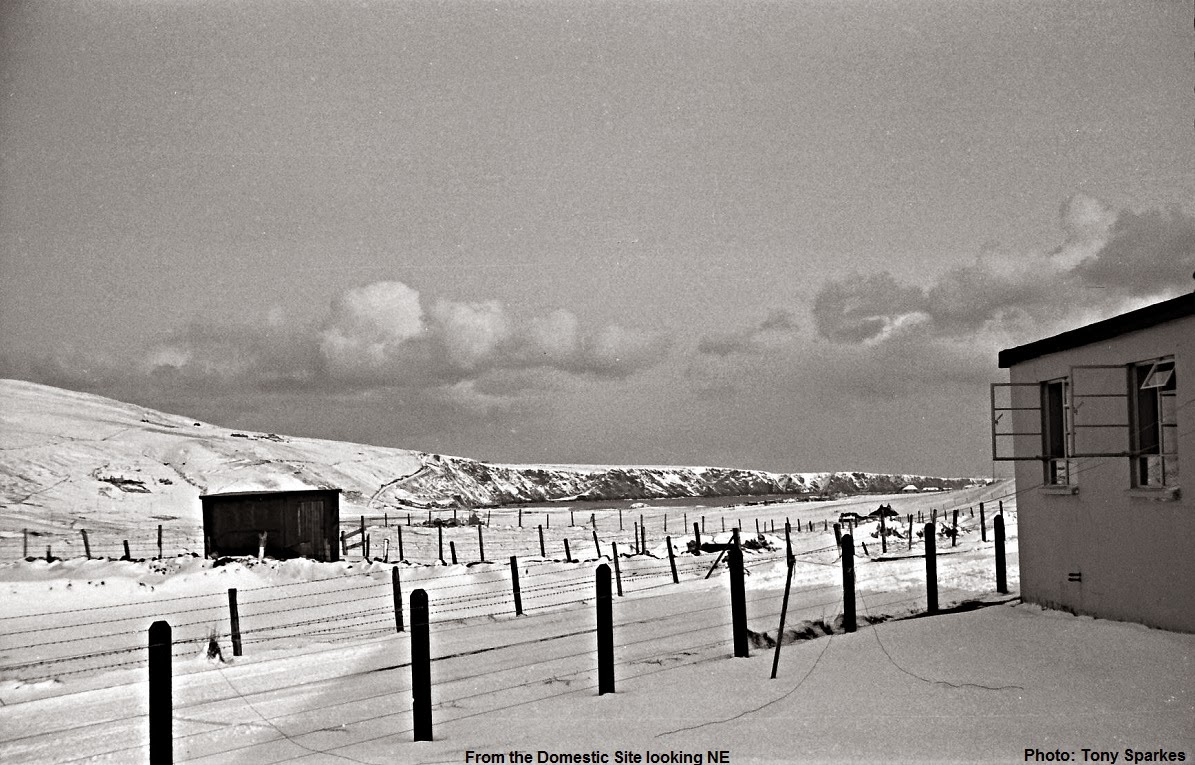 A picture, taken from beside the Site, with the old Wesleyan Kirk in the foreground and the Ward of Norwick & Transmitters in the background, is next: 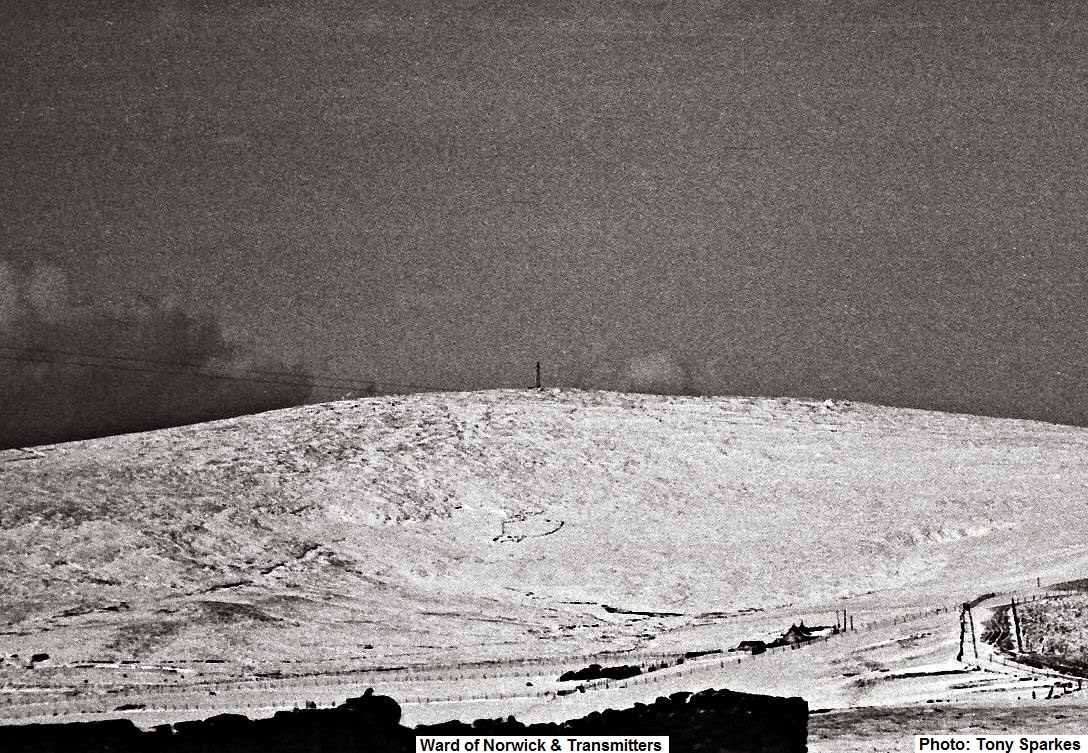 A couple of views taken in better weather follow. The first is of the area of the main gate and the second is of the Ice Cap (cinema): 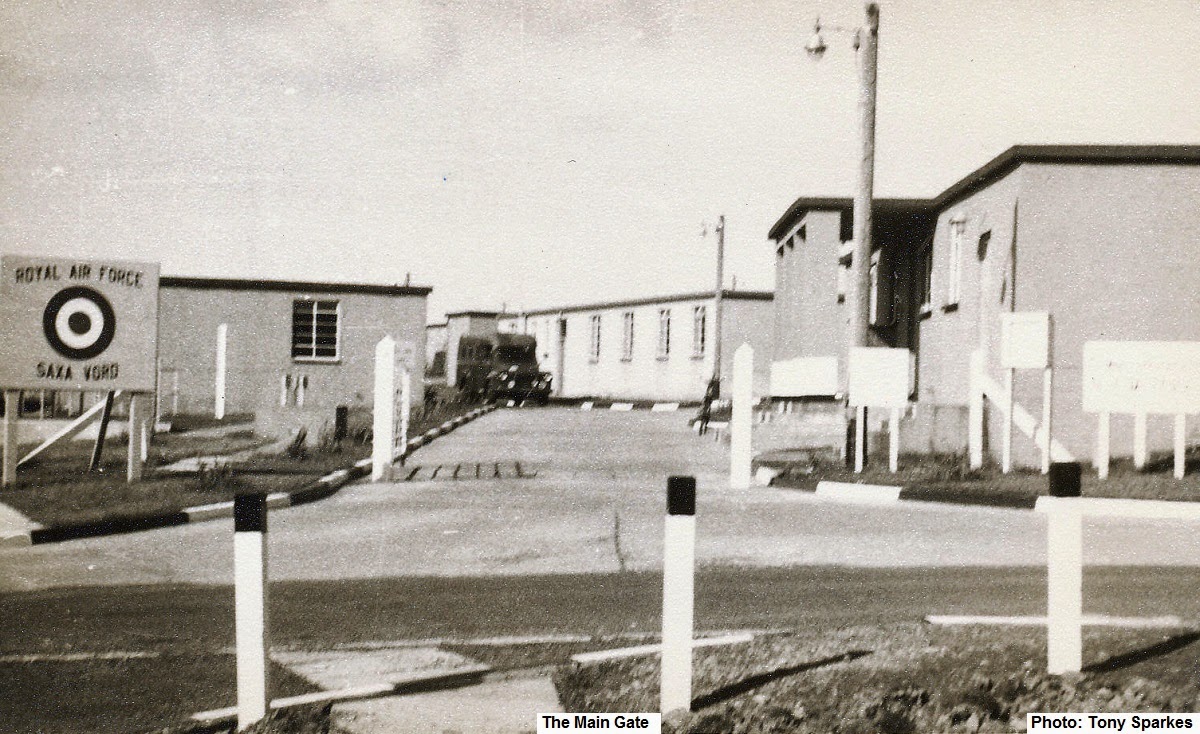 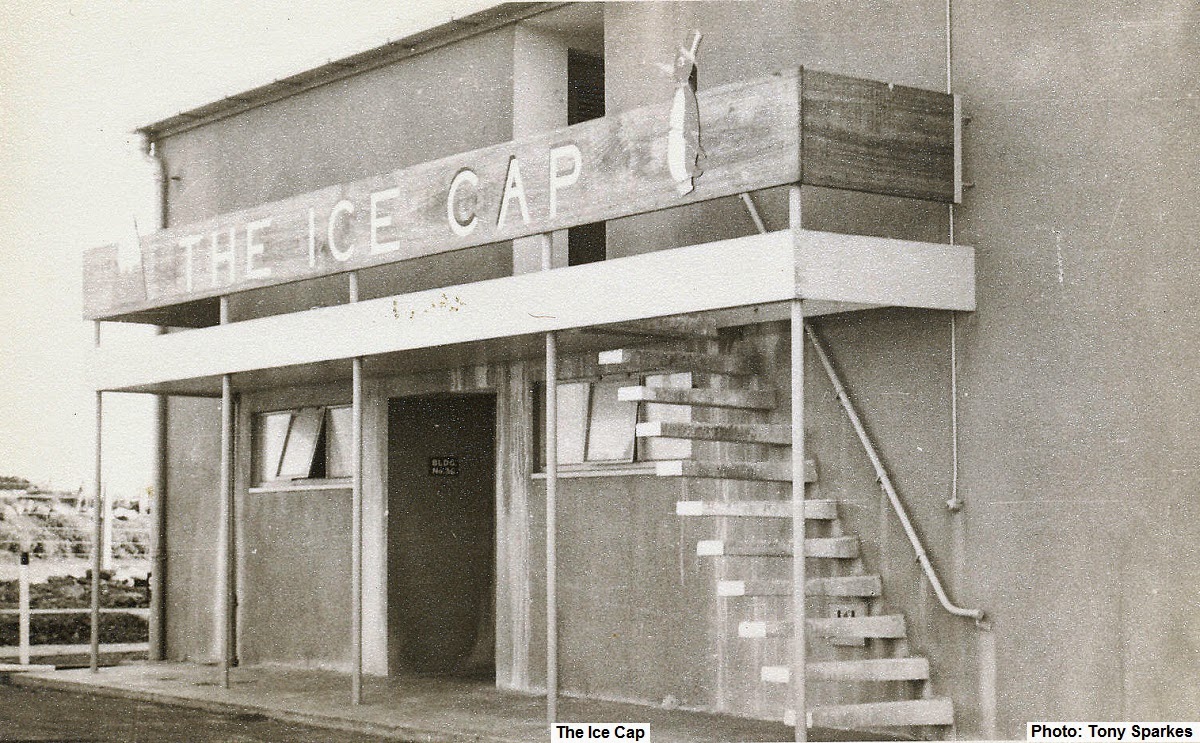 One of the local shops, Sandisons at Haroldswick, is featured next. Sandisons also owned the larger store and bakery at Baltasound, known as Skibhoul: 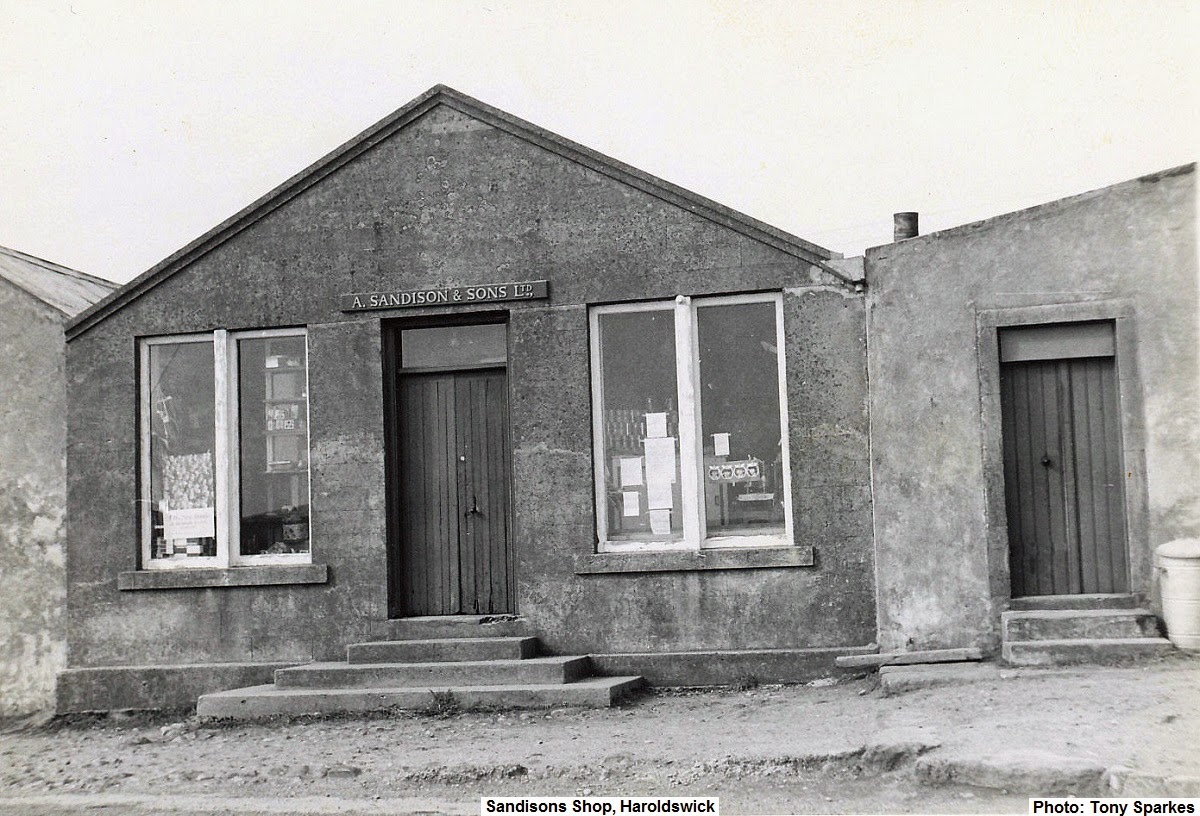 Tonys last Unst picture is of one of Shetlands famous exports. Shetland Ponies have long been bred on Unst for selling to the south folk, mainly as working animals in the early days but more lately as pets: 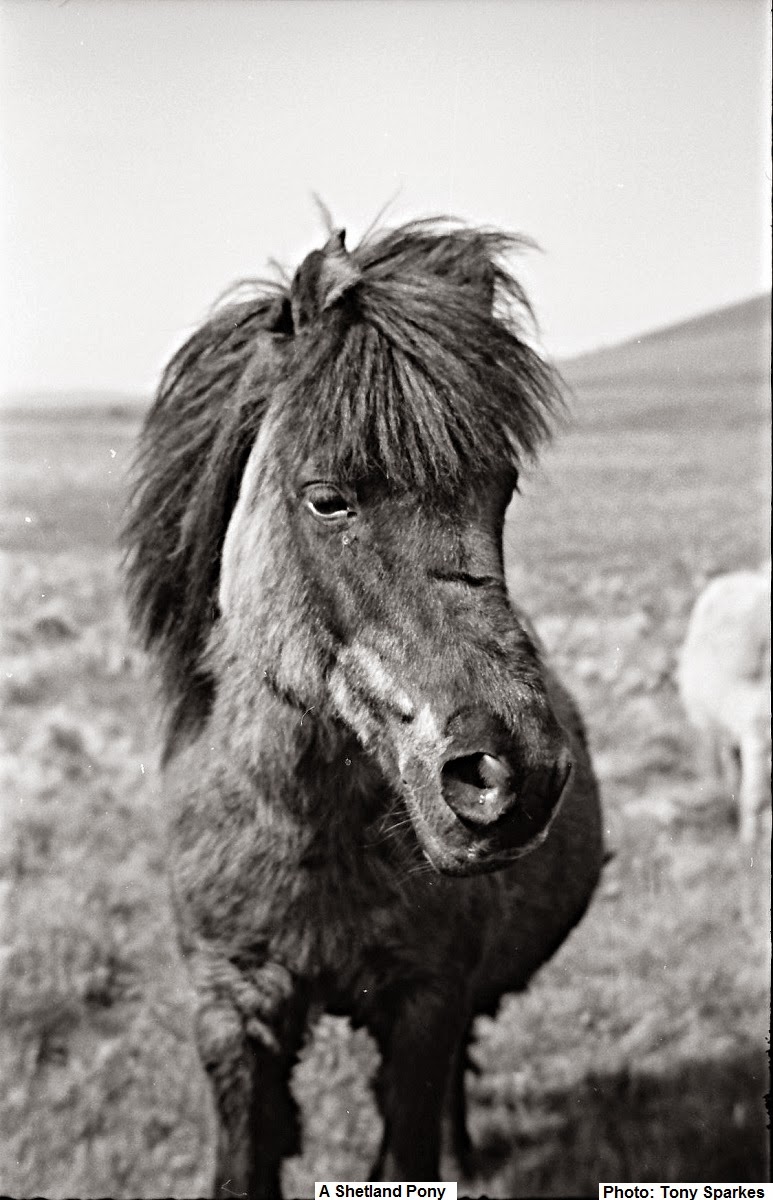 My thanks to Tony for allowing us to share his photos & memories of Unst.
CONTENTS LIST
http://ahistoryofrafsaxavord.blogspot.co.uk/2012/03/contents-list.html
Posted by Gordon Carle at 20:00 No comments: