Joe Cross was born 3 Jul 36 and was recruited into the RAF on 22 Oct 54. He was initially posted to RAF Cardington, Bedfordshire for the issue of kit, etc. 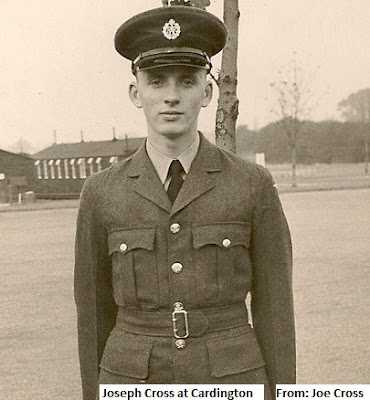 In the next picture Joe is in the rear on the left: 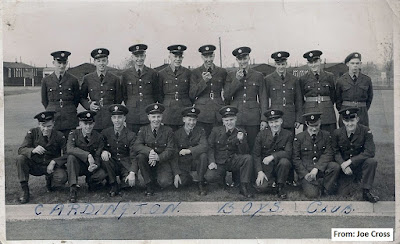 From Cardington he was sent to RAF Padgate, Cheshire, probably early in 1955 - where he would have spent 12 weeks learning the rules, drill and basic firearms skills. He would have been on one of the last recruit training courses at Padgate as the unit closed in 1957. From there he was posted north to Unst in the second half of 1955. At the time Saxa Vord was parented by RAF Bishopriggs in Lanarkshire,  the Unit did not become fully operational until Oct 57. Instead, the site was in the hands of the contractors with the Domestic and Ops sites still construction camps. Joe would have been posted in as one of an "advance party ", which would have been part of 90 (Signals) Group. The senior RAF serviceman on Unst for much of the time Joe was there was a secretarial officer called Flight Lieutenant C A Davidson who, as a Flight Sergeant, had been awarded the Distinguished Flying Medal in 1943 when flying with a Wellington Bomber Squadron. In Sep '57, just before Saxa Vord became operational,  the first CO from Fighter Command,  (Squadron Leader Gordon Millar) arrived and Davidson stayed on for a few months as the first Adjutant. There must have been a reasonable number of servicemen at Saxa before it became operational  as Joe was the goalkeeper in the RAF soccer team. According to one report there were about26 personnel in the advance party. including 1 Flt Lt, 1 warrant Officer, 5 SNCOs and 20 others but it is likely  that these numbers changed from time to time: 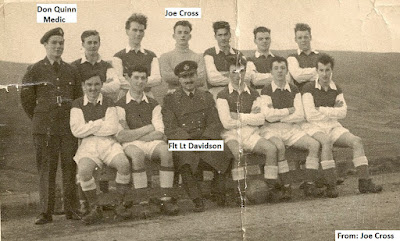 Another member of the "advance party" became well known to the civilian population of Unst and to many servicemen over the years. Sergeant Frank Brand, a fireman, spent  many years at Saxa Vord, both as a serviceman and as a civilian. He married a local girl and lived at Haroldswick for a long time before his death. 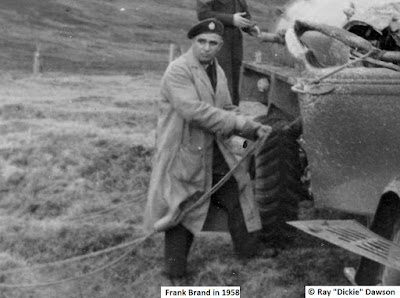 Some of the earliest buildings to be finished on the Domestic Site were the Billets - structures like the Gym and Education Section were completed later. The next photo shows Joe in his Billet with some of his contemporaries: 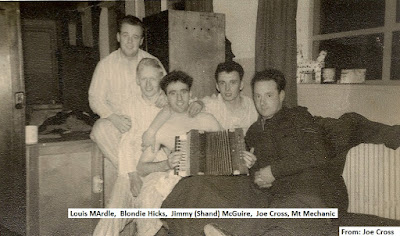 The fact that site construction was still in progress is noticeable in the following photo, taken by Joe from the Water Tower at the eastern end of the camp. The Gym/Ice Cap, Squash Court & NAAFI Shop have yet to be built and, in the foreground, a Land Rover belonging to Decca (one of the main contractors at the Top Site), can be seen. Also of note, the accommodation huts for the construction workers are just visible  in the distance on the left: 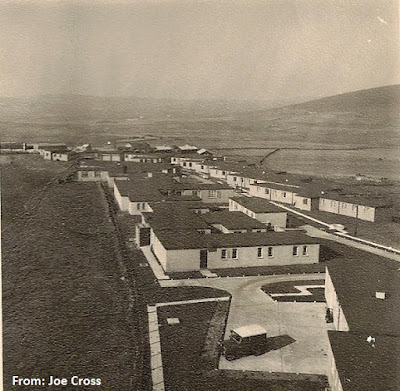 Joe's vantage point, the Water Tower,  from the east and with Station Sick Quarters in the foreground on the left: 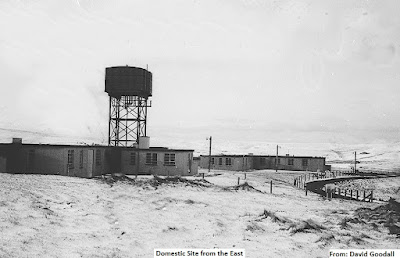 Joe appears to have had a fairly active social life during his time in Shetland, visiting the island of Yell and attending dances and/or regattas at Mid Yell and Cullivoe (neither place would have had mains electricity at this early date). Joe also struck up a friendship with a chap called Archibald (Erch) Lennon. The picture below was taken at the Norwick beach and I believe it  shows Joe Cross (bottom left),  Willie Mouat,  Margaret Mouat, Erch Lennon(RAF), Gilbert Gray and Jack Stewart (RAF). 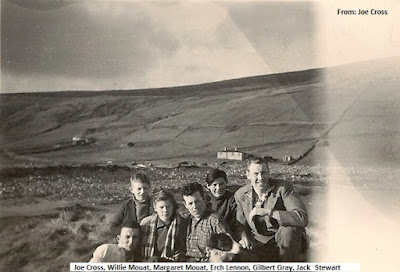 It is believed that "Erch" emigrated to the USA when he completed his RAF service. The next picture, also taken near Norwick, shows Joe on his own at the foot of some of the cliffs at Skaw: 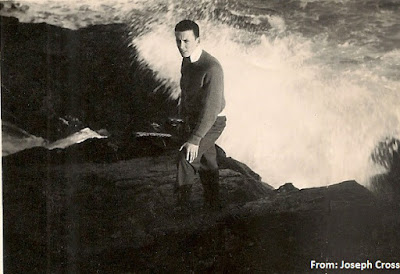 The following  two photos are of a couple of Joe's mates "messing around" in the vicinity of the Domestic Site Fire Section. The hose is unwound possibly as the area was close to building work and the surroundings would have been in need of regular cleaning. The subjects of the pictures include "Lofty" Kent and another serviceman, whose name has been forgotten: 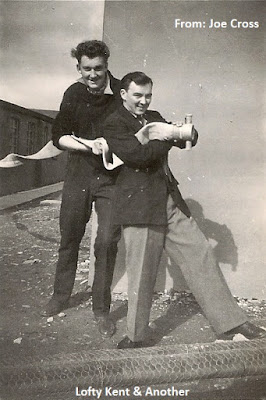 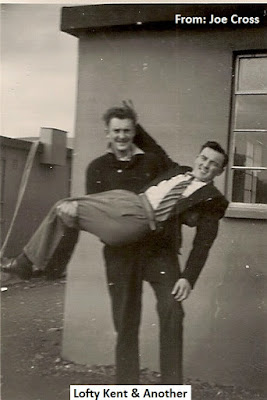 Upon completion of his service on Unst Joe returned to mainland Scotland and left the RAF. He had fond memories of Shetland and particularly of his time at Saxa but he never managed to make a return trip. Joe didn't really got into computers but in his later life his family  encouraged him to write to the Shetland Times, in the hope of rekindling old memories. This he did in 2014 and was subsequently contacted by phone & letter  by some of the people who had known him from nearly sixty years earlier. One Unst resident, Hunter Nisbet, who remembered him from the 50's, even called on Joe in 2016 when visiting central Scotland. Unfortunately,  Joe died  later that year.
My belated thanks to Joe and gratitude to Calum, his son, for providing most of the material in this article.
CONTENTS LIST
http://ahistoryofrafsaxavord.blogspot.co.uk/2012/03/contents-list.html