Mick (Ginge) Churchward, Saxa Vord '63- '66 : How I came to be posted there and my subsequent journey into the ‘unknown’!

"Getting an Air Radar Fitters Course was deemed virtually in 1962 impossible, so I elected to go Ground Radar like so many ex boys, which initially I thought was a step down leaving Air Radar.  As time went bye I realised I was being stupid.  So of I went for 13 months to complete my Ground Radar (Rotor) Fitters Course at Locking, Compton Basset and back to Locking.


With the usual RAF efficiency I was posted in late March 1963 back to Cottesmore to await an appropriate Posting.  However, I was posted in May to a Stafford MU, which was ear-marked to become a holding site and maintenance unit for Thor Missiles; I must add here that Stafford was made up of 6 different MU sites at the time. 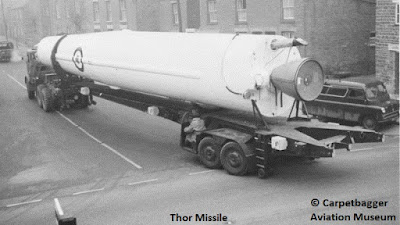 So having had a lot of cash spent on training me as a Air Radar Mechanic and then a damn sight more on getting me trained as GRF, some twerp (in Gloucester Records Office) thought it would be a good idea to send me to work on something I’d never seen.  That is, if and when the missiles were going to arrive, which no one was able to confirm.

One day in late June we were told that the Stafford RAFA was to be opened by the AOC, and it was suggested we young airmen should go along and swell the numbers, which we did.


After I’d had a walk around and a few pints I was approached by some nice oldish, well-spoken bloke who asked me if I was stationed at RAF Stafford.  I said yes and he went on to enquire about my trade and what I did there, and if I liked what I was doing. You may recall that I am inclined to speak my mind and be direct, so I did, but what I didn’t know was that he was the bloody AOC.


Next morning the Sqn Leader (CO of the unit where I was based) called me in and in no uncertain manner asked what the hell I was playing at, talking to the AOC like that. I tried to point out that the AOC had asked me questions and I thought he genuinely was interested in what I did.  Well you can imagine the response that generated, and the admin staff next door heard every word.  It soon became common knowledge about this fool of a J/T who had upset the Sqn Leader by having had the temerity to talk to an AOC, but worse still had the stupidity to tell him the truth!!


It was later that day that I was called to the General Office to be given two choices of posting to a Ground Radar Site, wait for it, wait for it:  Saxa Vord or Aird Uig.


Now, for the uninitiated or those not from Scotland or just not so good at the old geography, these two little gems feature in the North Scottish Islands and West Scottish Islands respectively.  They do have something in common though, (apart from housing a Radar Site each I mean) the Islands that they are on both start with a U, Unst and Uist.
I asked for the weekend to think about it and was generously given the OK.  Only to hear on my return that “Only one is left”, which one I asked, Saxa Vord was the reply, to which I smiled sweetly and said, “Oh great, ‘cos that was the one I wanted.”  I spent the next six weeks in the Technical Records office for my sins, up dating AP’s before departing Stafford for the Shetland Islands in August of 1963.


It was the summer season and not a bed/cabin was to be had aboard the ferry to Shetland - the MV St Clair: 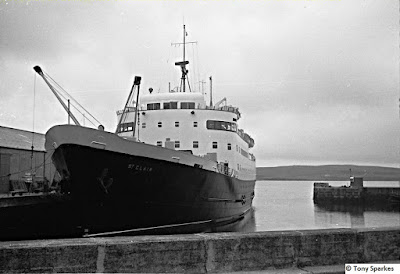 Arriving at Lerwick at 6.15 in the morning I woke up with a blanket wrapped around me, obviously some kind seaman had the job of issuing blankets to those without a cabin; my first trip over the North Sea (NS) was the kindest I ever had. I found the office where my rail/bus warrant needed to be changed - Leasks Travel: 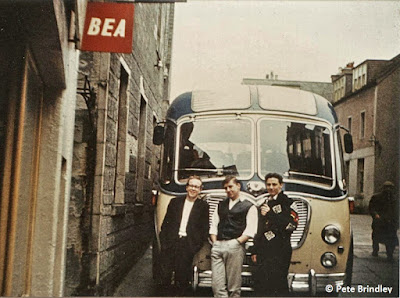 At Leasks I received a strip of 6 tickets, with names like Gutcher, Mid Yell, Toft & Belmont  on them.  I was somewhat bemused. 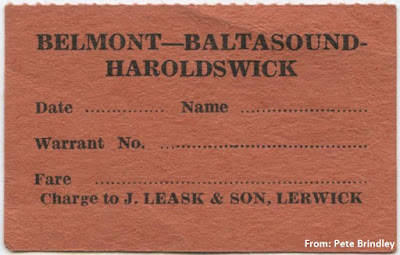 The first bus was just like any other coach, comfortable seats etc, but it carried nothing like any other coach.  However, I didn’t realise that until after an hour or so of driving, we then stopped at a small pier at a place called Toft.  With absolutely nothing in sight left or right or out to sea, we sat and waited.  While we waited loads of stuff was unloaded onto the quay, milk, (crates of it), packages, cases, kitbags and all the usually stuff associated with travel, together with the Royal Mail. 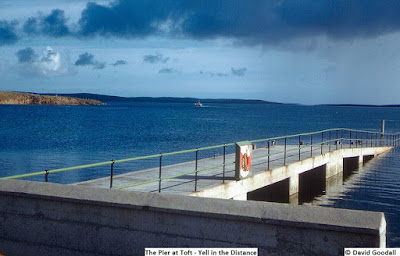 We still waited.  I did say my first crossing with the North of Scotland ferry to Lerwick was the best, so you can imagine that the weather was very good, it was. But, standing there waiting for the inter-island ferry it felt freezing cold, believe me it wasn’t nice.  Then, at last, with a chug, chug, chug a smallish boat came around the headland.


Passengers helped unload the contents of the boat on to the bus and then we all heaved and lifted the unloaded stuff onto the boat, which had been previously loaded from the bus onto the pier.  Then we all climbed on the boat too.  Forty minutes later we were unloading the same stuff, then loading it onto a less smart bus, with harder seats and a noisy gear box.  As we travel along on what is mostly a single, but tarmac road, the driver stops in what seems to me to be in the middle of nowhere?  OK, I can see a small track leading away over some peat fields!  Where he deposits milk and mail; this was certainly becoming an eye opener for me.


He repeated this many times before we reached Mid Yell an hour later, when we did the unloading and loading up activity yet again, except it was now from one bus to another old one


Well I’m sure you’ve got the hang of this by now.  Off we jolly well go for another hour, again as postman pat and milk man and dropping off all manner of things that small peat farmers and Shetland ponies need.  Eventually we arrive at another, but much smaller quay, and a boat arrives not much bigger than a rowing boat.  It’s OK though, because our numbers have shrunk to seven people, four blokes including me, a couple and a young woman. 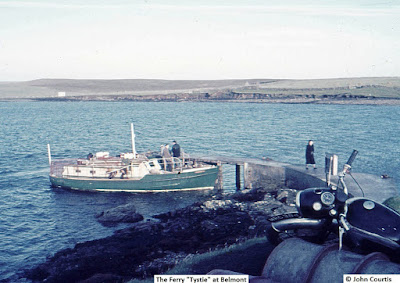 After we rounded the headland and 20 minutes on I saw the oldest looking coach you’ve ever seen, well what I mean is, I’d ever seen.  It was backing down this causeway towards where I assumed the boat would tie up – well I got that right and I’d arrived on Unst.

Just another 40 minutes drive on rock hard seats, no evidence of springs in the suspension and a gear box that had more to say than me, and my journey was over. “Fine day” and welcome to Saxa Vord said the bloke in the General Office, the expression “fine day” I was to learn was used by everyone and especially the locals IN ANY WEATHER conditions, and believe me we had weather conditions up there. 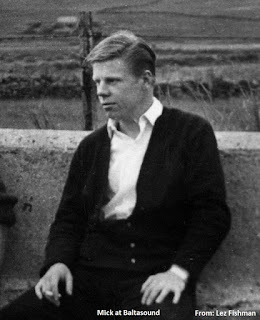 I always seemed to pick the worst weather to go on leave, booked way in advance, so much so I was asked to ‘post’ my proposed leave dates on the notice board so that others could avoid them.  I flew out once on leave and once when there was an epidemic of something in , all the other times the weather was far too bad to fly so I had to use the over-land and then St Clair into .  Funny how I could always fly back though, I began to think someone ‘upstairs’ had it in for me. (Note: I believe the "epidemic" referred to in was a famous outbreak of Typhoid, caused by South American Corned Beef - https://en.wikipedia.org/wiki/1964_Aberdeen_typhoid_outbreak"

Having said all that, I had a great time there, basketball in the winter and football in the summer and I almost lived in the gym when I was single.  An entry from Station Routine Orders from Jan '64, supplied by Pete Brindley:

A Saxa Soccer team photo (with key) from 1964, supplied by David Shields, I'm in the centre of the front row with the shield: 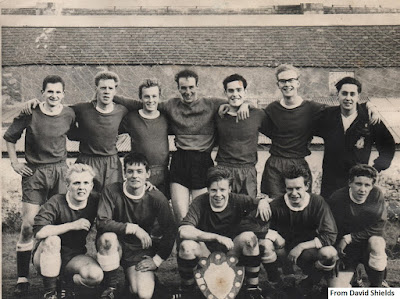 My stay was interrupted in June of ’64 to attend my Conversion Course and become C & R GRF, so Rita (my then wife and eventual mother of my two children, Tom born in Lerwick and Jen in Cyprus) and I went to RAF Locking and Weston Super Mere.

I was asked to complete a posting request whilst at Locking as my 18months would be up shortly after going back to Saxa, I requested 91SU, Saxa Vord and the Shetlands.

We duly returned in November, only this time we drove a mini van from Locking to Aberdeen, trouble was we’d failed our driving tests, which we had had to take in Bristol, not Weston-super-Mare where we had learnt to drive.

Our qualified driver to Aberdeen was a 6 foot 2 direct entry lad named Bert Weedon whom would have just finished (with me) his Conversion Course.  I really don’t remember his first name, but he was a smashing bloke and I've never seen him since.  We all shared the driving and it was great adventure for us and gave us what we didn’t have for the test in Bristol, driving experience.

The following picture was taken in the Grand Hotel, Lerwick, by Lez Fishman:
: 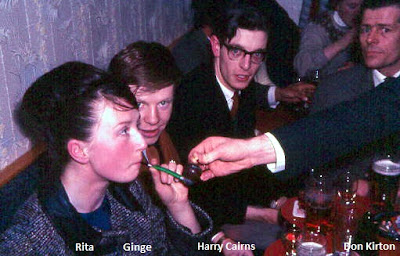 Taking the driving test six months later was fun on Unst.  Imagine you are approaching a set of traffic lights -Mr Churchward, they are… Similarly, 25yds ahead is a zebra crossing; neither of these things existed on Unst then.  I went back in the afternoon with Rita as her qualified driver!  Interestingly, I had never seen so many L plates appear in the space of two days ever before, or since.