There are a couple of stories about the Saxa Type 80 which have circulated the air defence world for decades. The more common of the two is that it was blown over a cliff in a gale. At a later date there is a tale of the radar being blown out of its radome. Like all good stories there has been some embellishment over the years. In fact neither incident actually occurred as the folklore suggests.It is true that the T80 reflector was twice removed from its turntable by gales, but on neither occasion was it blown over a cliff. The Type 80 site was around 600m from the nearest cliff and the reflector assembly weighed about 18.5 tons – even a Shetland gale couldn’t manage to move it that far. Having collected data about Saxa Vord for over 4 years the tale has frequently been repeated to me in one form or another. It usually starts “I was on duty at Buchan, Trimmingham, etc the night it happened. I can remember the date because I’d just arrived, been promoted etc". So far I’ve been told that it happened every year from 1959 to 1967.
There was a problem with the early Type 80 aerials in high winds. Three CEW sites were being built at his time under the ROTOR programme – at Aird Uig, Faraid Head and Saxa Vord.  A Control & Reporting System Quarterly Progress Report Progress Report dated 1 Apr 56 noted that “During exceptionally high winds, early in the New Year (1956), damage occurred to the Early Warning Radar Type 80 at FARAID HEAD, and some of the structural members of the aerial framework were badly strained. In order to avoid the possibility of similar damage in the future, the Design Authority has decided to strengthen the aerial system by modifying the centre section of the mainframe and a design study is at present being carried out to establish what modifications can be incorporated with minimum disturbance to the present design.”
RAF Saxa Vord (91 SU as it then was) became operational in October 1957. It had already lost one aerial assembly. This occurred either in December 1956 or very early in 1957. The Control & Reporting System Quarterly Progress Report Progress Report dated 15th February 1957, held by the PRO, refers to this event. This Report, under the heading ”B -ROTOR III”, states ”Owing to damage sustained during recent gales the aerial of the Radar Type 80 at Saxa Vord will have to be dismantled and the centre section, main frame and under frame, replaced.” I have also had emails from someone who said that photos and a16mm “home movie” were taken just after the event. Unfortunately I have lost contact with that correspondent.  Certainly, if the aerial had to be dismantled, it didn’t fall over a cliff (Saxa 936’ above sea level). Should anyone have any documentary or photographic record of this episode I would be very pleased to hear from them.
About 4 years later the second Type 80 aerial at Saxa was dislodged. I can be very specific about this event because there is abundant evidence which includes a copy of the Operations Record Book (F540) for the period, a copy of the Met Office Charts for the date involved, numerous accounts from people who were there and photos from an officer who was on the Unit strength at the time - Fg Off John Courtis.
The Operations Record Book for RAF Saxa Vord states that, “On the evening of 27th January 1961 very severe wind conditions were experienced at the Technical Site and the Type 80 and Type 13 radars were extensively damaged”. It then goes on to say that “The entire rotating assembly of the T.80 above the turntable broke away at the under frame joints. The scanner damaged the motor platform and alternator room and came to rest upside-down clear of the alternator room. It is a complete write-off”.  Fg Off Courtis, who was a National Service Officer on a 3 year engagement, was at 91 SU/ RAF Saxa Vord from October1960 until December 1962. He took a number of photos of the wreckage left after the storm, which were published on the Saxa Vord blog here:-

http://ahistoryofrafsaxavord.blogspot.co.uk/2011/03/type-80-is-off-part-2.html
One of those photos is reproduced below (left click on photos to enlarge). 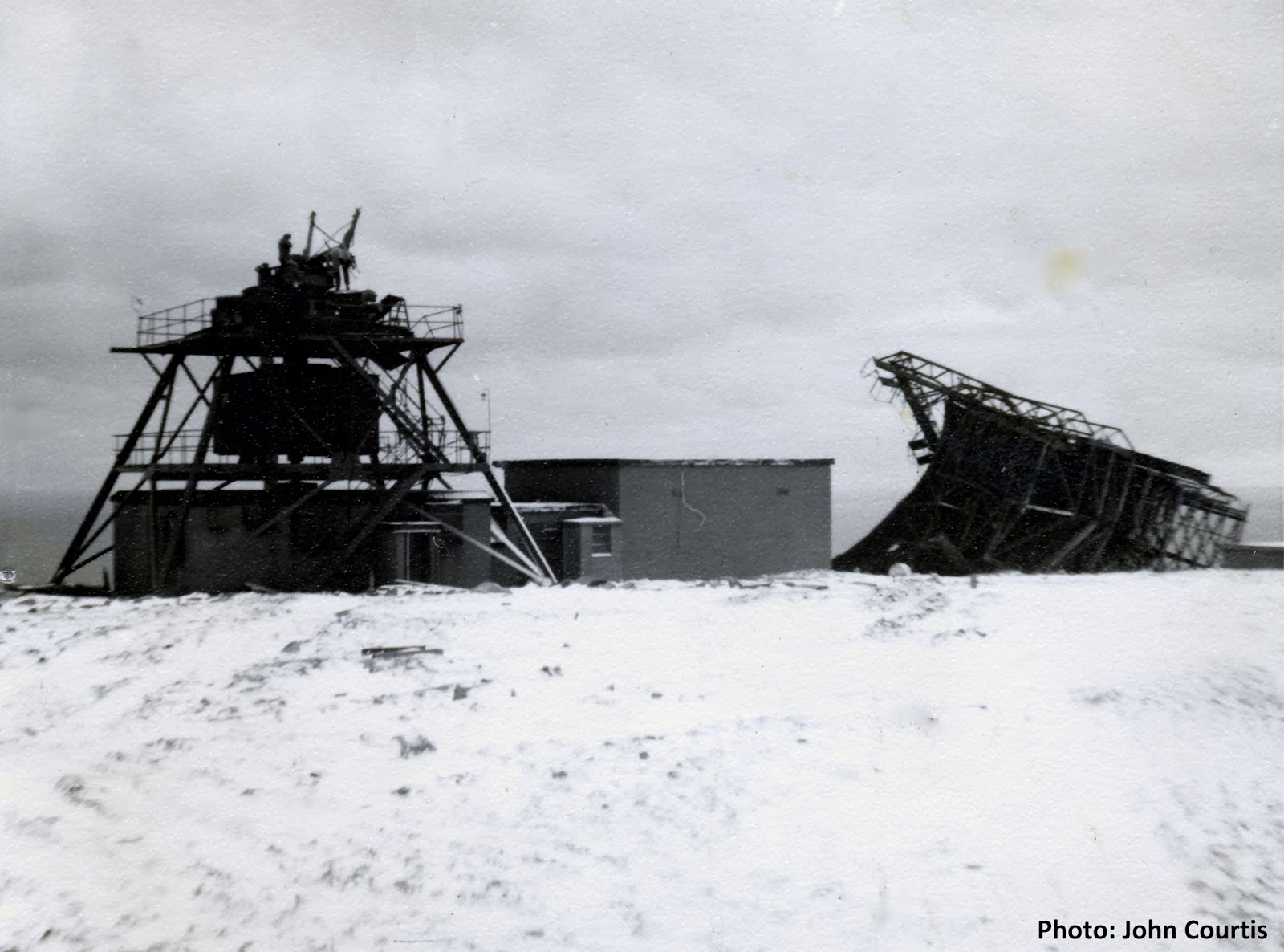 As you can see – the aerial didn’t make it to the nearest cliff. In fact, the direction the scanner travelled was towards the old RAF Skaw site at Lambaness - on that heading the nearest cliff was about 2 miles away! The next photo shows the alternator building, the Type 80 scanner and Lambaness. 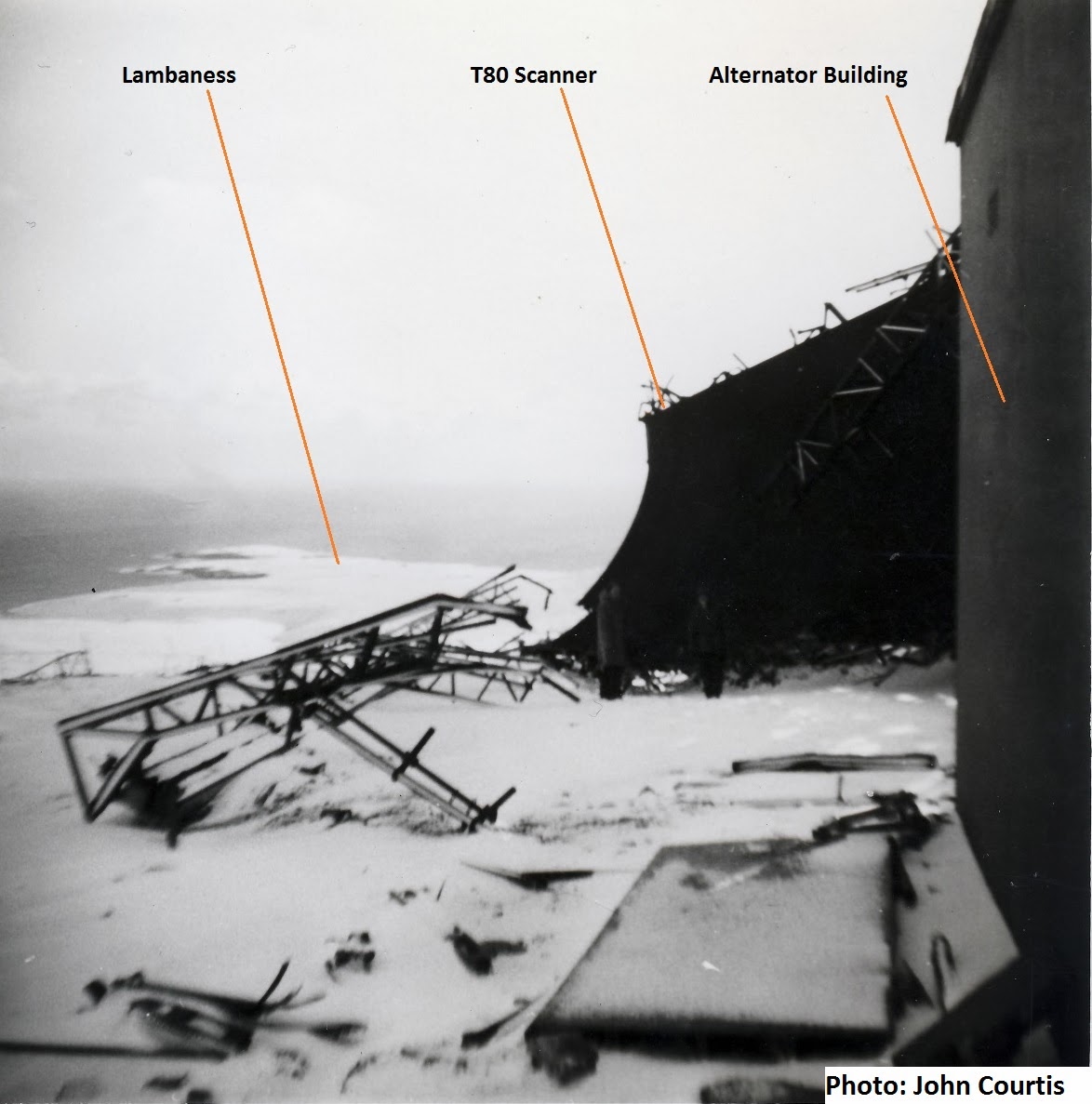 So how did the legend arise?  Had I been on duty in the R10 (Ops Block) on the 27th January 1961 and the radar picture had gone blank, I would have phoned the Heads to find out what was wrong, probably to be told the wind was off the scale on the anemometer, the radar head had gone and no one was prepared to go outside to look for it!  Imagination and embellishment would have taken over – the landlines would have been buzzing throughout the UK Air Defence Region. There are official RAF photos – some of which I have seen – also showing the scanner close to its turntable.
I have read and heard a number of accounts about the Saxa Type 80 being “blown out of its radome” in 1965 – I am certain this never happened.  Searching the records, the most significant damage to the dome seems to have occurred within a couple of weeks of its completion. Just after the handover to the RAF by the Norwegian contractors in September 1963, severe gales caused considerable damage. The following picture, which is a segment of a photo taken by Lez Fishman in September or October 1963, shows Muckle Flugga though a gap in the radome caused by these gales: 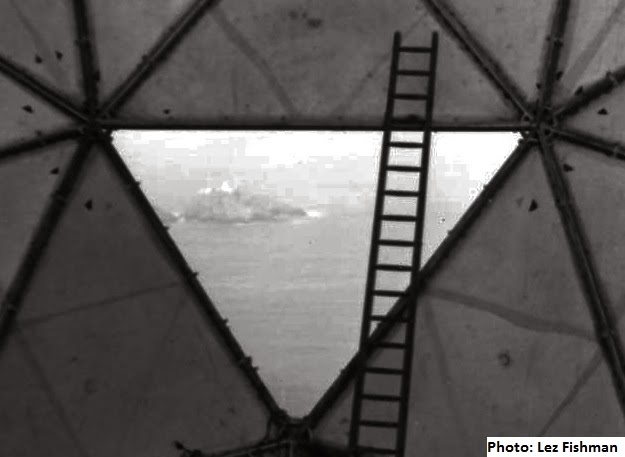 The Norwegian contractors were recalled and a number of RAF personnel were involved in repairing the radome. Even though there was significant damage with numerous panels blown out, the Type 80 remained inside, as can be seen in the copy of the full photo below: 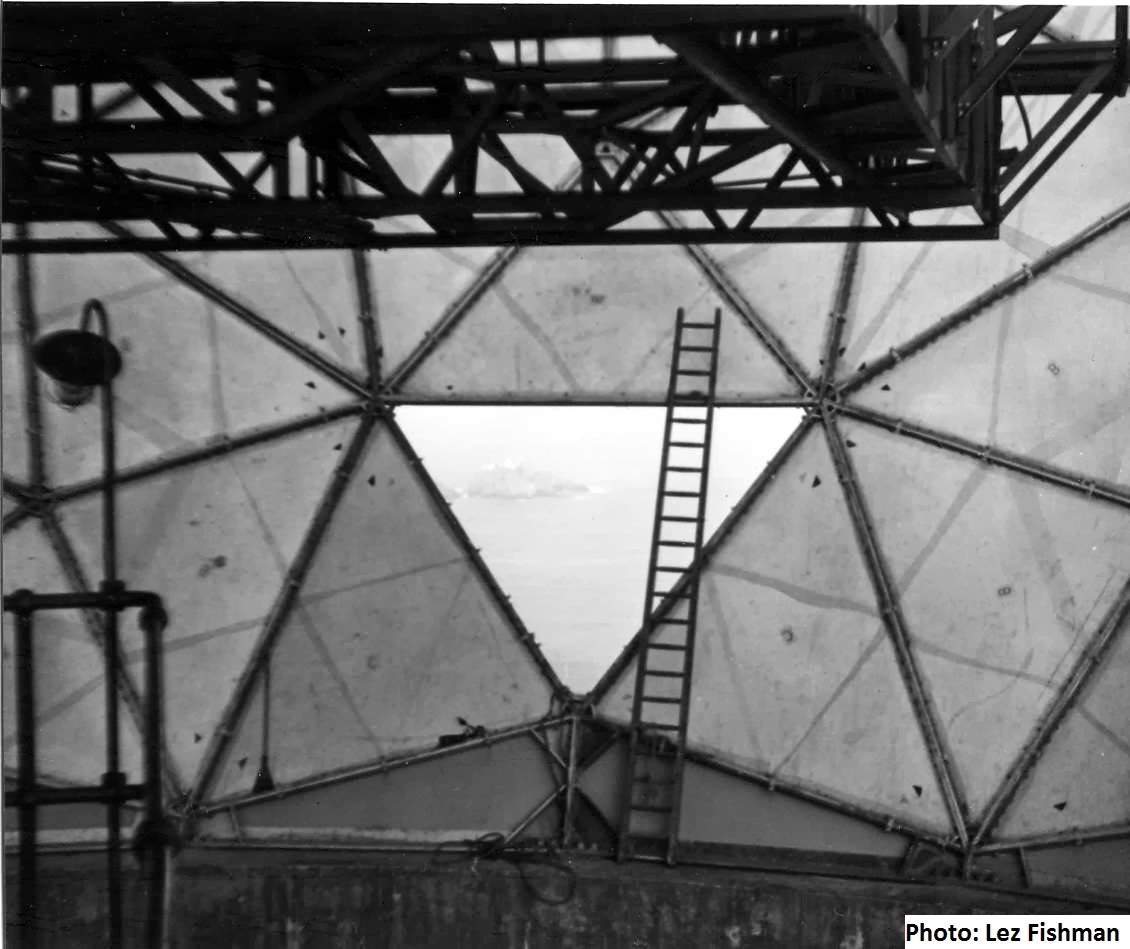 By 1965 Saxa had only one search radar– the Type 14 was dismantled in September 1964.  Had the Type 80 been blown out of its dome, Saxa Vord would have been off the air for a long period. There is an entry in the F540 for 12th February 1965 which says “During a severe gale, one of the large steel double doors in the radome walls vibrated loose and was blown off its hinges. The door is being repaired by a local agent”. Perhaps this event was the origin of the story. There is nothing else in the F540 during 1965 about the Type 80, other than normal maintenance and faults. The longest period in 1965 when the Type 80 was off the air was from 2nd to the 16th August when AMTG/APO was carried out (Annual Maintenance Turning Gear/Air Plant Overhaul). I arrived at Saxa Vord in 1967 and, whilst I heard the tales of the Type 80 damage in 1961, no one mentioned anything about a later major incident.So, sorry to have to tell you – Santa Claus really does not exist. The Saxa Type 80 and the cliff, I expect my grandchildren will hear the story and believe it, but it is a myth based on the events of a terrible night when it was unsafe to venture outside!  A 75 x 25 foot, eighteen and a half ton aerial blown out of a radome without putting a station off the air for a long time – worthy of a mention in the Operations Book one would have thought - it didn’t happen at Saxa Vord!
Sources:
RAF Saxa Vord F540 – Operations Record Book
C&R System Quarterly Progress Report Progress Report dated 1 Apr 56, held by the PRO
C&R System Quarterly Progress Report Progress Report dated 15 Feb 57, held by the PRO
Bob Jenner
John Courtis
Lez Fishman
David Goodall
Davy Leask
Andy Thomson
Billy Williamson
﻿