Every year RAF stations were subjected to an Inspection by the Air Officer Commanding (in Saxa’s case that would be 11 Group or one of his senior staff officers). I suppose that the idea behind it was to ensure that stations were running efficiently and the inspection could have a significant impact on the Station Commanders promotion prospects. It certainly led to weeks of preparation, painting and parade rehearsals etc. I have material on a number of these inspections at Saxa but I thought I’d start with 1968 because it was the only one I took part in.

Drill was never my strong point. During my training the Drill Instructor announced to those assembled on the parade square that he’d never want to dance with me as I had two left feet – I got into a certain amount of trouble for my response – a response was not the correct action on the parade ground. I still believe I was right in saying that I’d never ask him for a dance. The DI was court-martialled sometime later for embezzling funds from the Sergeants Mess.

For some reason, which I’ve never understood, service wives undertook the status of the husbands rank. Some senior officers wives I’ve met were not deserving of respect whilst the wives of more junior ranks have often turned out to be pleasant, interesting people. Anyway the usually brought his wife along for the trip. Some poor junior Officer was then expected to chaperon the wife around the place – the wife’s club, the best views, any local activities etc. I don’t know if anyone costed the idea – free seats on RAF Devons/Pembrokes, free accommodation, free food and a waste of people’s time. For some reason the MOD thought it was value for money!  I'm not being critical of the AOC's wife on this occasion, I didn't meet her, I just had problems with the "system". Still I suppose the Prime Minister often takes his wife with him on overseas trips.

In the early years at Saxa the troops marched past the in front of the SHQ and the parade was held on the tarmac in front of MT. This meant that a number of the MT vehicles had to be parked elsewhere (in one of the photos below you can see the Fire Tender parked by the NAAFI shop). I am happy to say that my 2 left feet caused no embarrassment and that the CO was promoted within a year (doubt if there was any connection).

The first photo below shows the actual ’s  Parade – it was held on the hardstanding in front of MT. The was RI Jones CB . 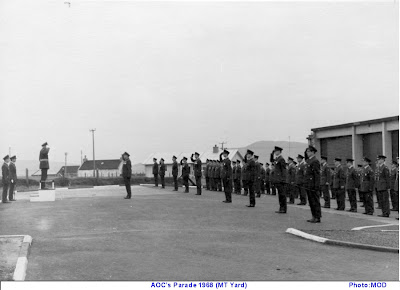 I have enlarged a section of the photo above and added a few names. My apologies to the other personnel whose names I should have remembered but, whilst I recognise some other faces, my memory for names has never been good. 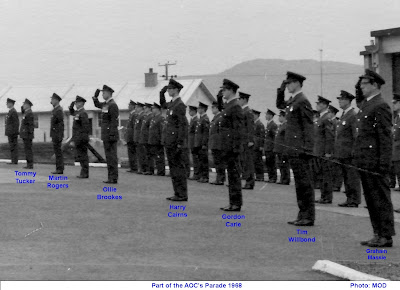 Flt Lt Ollie Brookes (left.centre) was a Fighter Controller who was the nominated Unit Fire Officer. As such he was entitled to his own station bike! This bike, painted red of course, was misappropriated by a couple of airmen and only disovered much later hidden behind a dyke. At one stage in his career I believe he had boxed for the RAF - though his talents were not required on this occasion.
Near to the left end of the front row is Flt Lt Tommy Tucker, also a Fighter Controller, though an ex WWII Pilot. I remember that he used to fly the P47 Thunderbolt during the latter years of the war.
The next 3 photos show the March past by Station Headquarters. 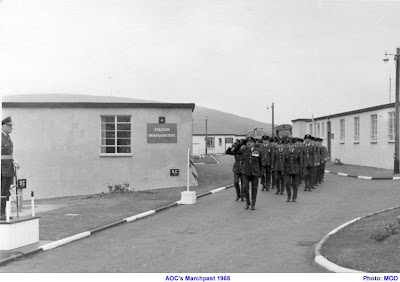 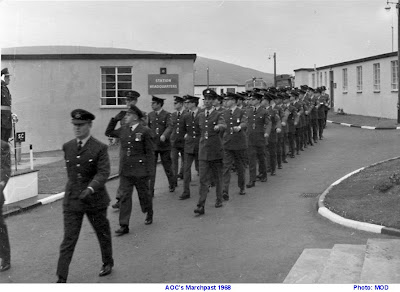 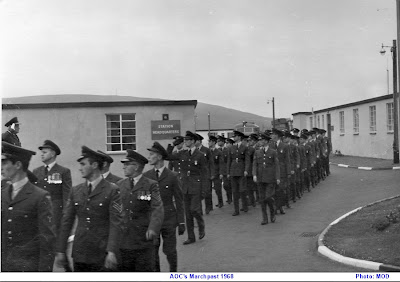 Usually when a senior officer visits a unit there are other tasks to perform, new facilities to be opened, medals and awards to be presented etc. On this visit Warrant Officer Cornes was presented with an AOCinCs Commendation. 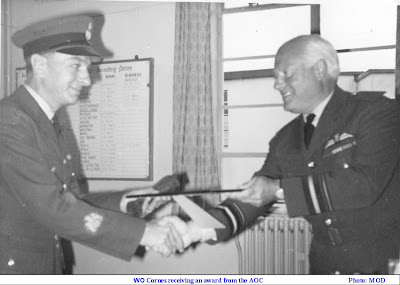 Commanding Officer. The Commanding Officer in 1968 was Sqn Ldr Jerrold Le Cheminant . I’m not sure about the derivation of the name but I believe it may have originated in the . I was lucky enough to serve on 3 units with “Chem”.  He was at RAF Bawdsey where I did my Fighter Controller training, He was my boss at Saxa and he was my boss again at RAF Bukit Gombak in Singapore. Despite the fact I was on the wrong end of a couple of  interviews I can honestly say he was the best CO I had in 22 years of the RAF.
He was a Sergeant Pilot in the Battle of , flying Spitfires. During the war he flew with 72, 92, 616 and possibly 232 Squadrons. He was attributed with having shot down 6  German aircraft (incl ME109’s). In the 40’s, 50’s & 60’s NCOs becoming commissioned as officers served it what was known as the ”Supplementary List” and it was unusual for them to be promoted beyond the rank of Flight Lieutenant. Chem was promoted to Wing Commander before leaving Saxa and subsequently retired from the RAF in the early 70’s.
Unfortunately Chem died some time ago but is happily remembered by many. 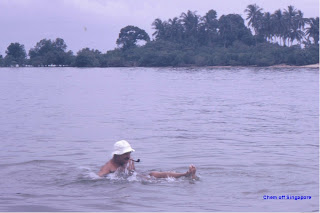