RAF Personnel, posted to Unst when the camp opened in 1957, were entering a different world. Most of them would have come from towns and cities on the mainland and be used to many facilities not available to Unst folk at the time. Many of the incomer’s families would have bought a TV set to watch the Queens Coronation in 1953. They would be used to electric kettles, irons and record players; whereas, Unst had no mains electricity before the arrival of the RAF. A few families had private windmills and charged batteries for lighting and radios, otherwise the use oil lamps for lighting and ranges for cooking were the norm.

This led a few of the servicemen to feel that they were in the midst of a backward society.  In fact, many of the locals were better educated, better travelled and better skilled than some of the newcomers. A number of Unst folk had fought in WWII and had done National service. There had been many servicemen on Unst at RAF Skaw until it closed down and so the local population were more used to the incomers than vice versa.

Those members of the RAF who accepted that life on Unst was different, not necessarily better or worse, usually ended up enjoying themselves. Over many years it was said that more servicemen requested extensions to their tours at Saxa than at any other RAF Station in the . A significant number requested second and third tours of duty.
In order to operate the station it was essential that a Power House be built to generate electricity. 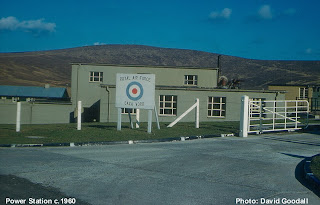 The electricity produced was more than enough for the RAF and so it was possible to offer mains electricity to Unst. In fact the island was able to receive mains power before many other parts of the and . Unfortunately, residents had to pay in the same way as other citizens.

In order to keep the generators running fuel was needed in fairly large quantities. Two large oil tanks were built by the pier at Baltasound. 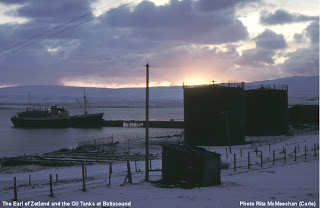 The Unst History Group produced a booklet to celebrate the Millennium and it contained a picture, taken in the early  '60s, of some of the Power House staff. I have reproduced it below, together with the list of of people shown: 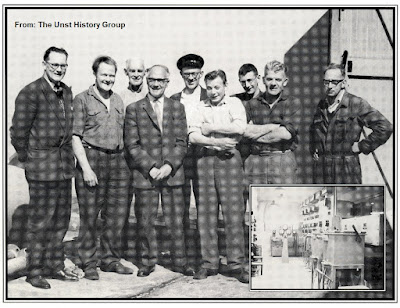 An article from the RAF News about the delivery of fuel to the RAF is below. 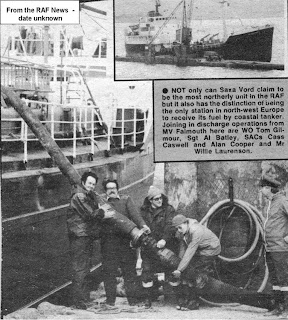 At some time, possibly in the 70’s, it was decided that Unst south of Baltasound would receive its mains power from the Scottish Hydro via Yell whilst the RAF would continue to supply to the north of Baltasound. With the RAFs need for standby equipment they were able to provide a more reliable service and there are stories of bad nights when those north of the voe were enjoying light and heat whilst those to the south were in darkness and cold. Eventually the Scottish Hydro took over supplying the whole island and the Oil Tanks were no longer needed. The last picture in this section shows what the area looks like now.