The Earl of Zetland

The MV Earl of Zetland was owned and operated by the North of Scotland Steamship Company (known locally as the North Company). During the time of RAF Saxa Vord it was the second ship of that name. The Earl operated out of Lerwick from 1939 to 1973 (apart from a break during WWII when she was used on the Pentland Firth). She weighed 548 tons and carried passengers and cargo between Lerwick and a number of the outer Islands. When in Lerwick she was normally berthed on the opposite side of the Victoria Pier to the usual berth of the St Clair. In theory it was an easy transfer from one ship to the other.

The Earl of Zetland at Lerwick 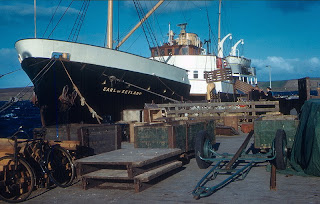 
The sailing times of the Earl, though published, were often dictated by the weather and tides. The actual route it followed would also depend on the sea state, the passengers on board and the cargo it carried. The ship could call at Whalsay, Out Skerries, Mid Yell, Fetlar, Uyeasound and Baltasound. At some of the stops , Fetlar for example, there was no suitable berth for the ship and flitboats were used to off-load passengers and cargo. Flitboats were also used at some of the other destinations when the tide or weather was wrong. 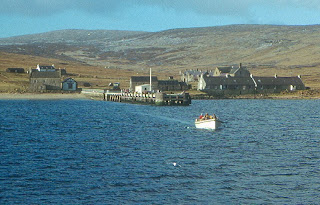 The length of the trip between Lerwick and Unst was very variable, dependent upon tides, winds and cargo. Sometimes the Captain would decide to go to Uyeasound and miss out Baltasound altogether. If there was a bad forecast he would turn around and head south or find somewhere to take shelter. Vehicles were treated in the same way as other cargo & had to be winched on deck. If it was decided that your port of call was ruled out by weather your car could end up back in Lerwick. For it's time the Earl was well appointed with decent cabins and a bar. In good weather the views and wildlife between Lerwick and Unst were spectacular. In bad weather she seemed a very small ship!

Earl of Zetland at Baltasound Pier 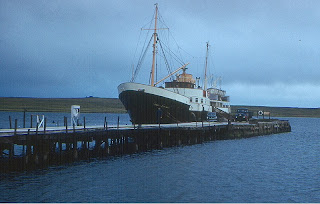