I have visited 3 places in Shetland where I believe that construction of VHF DF sites took place; at the western end of Crussa Field on Unst, just north of Isbister on "Willies Wart", Whalsay and at Eshaness on the Shetland Mainland. A fourth site on the Hill of Swinister, south of Firth, also on the Shetland Mainland, was recently brought to my attention. The Shetland sites appear to have been planned to the same design but the first 3 I mentioned did not become operational and I don't know enough about the site on the Hill of Swinister to make any comment on whether it achieved active status. To begin with in this section I will describe  the remains at each location and, in succeeding paragraphs, information from similar sites in the rest of UK will be used to attempt to learn more about the 4 Shetland VHF DF units. 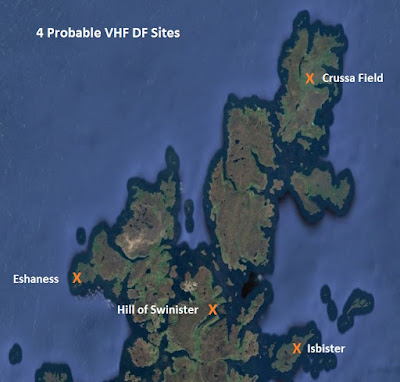 VHF D/F site on Crussa Field, Unst. The re
mains at this position are the least recognisable of the 3 and I cannot be absolutely certain that it was a D/F site!. It was begun on the western side of Crussa Field, a few hundred yards west of the Rounds of Tivla. A slightly raised area of soil with, what appears from a distance as  a short, low section of wall, on the northern side of the raised ground. 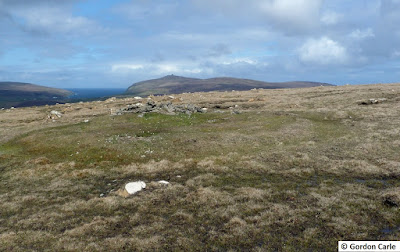 On closer inspection the raised area appears octagonal in shape and small traces of broken glass and coal were discovered within its boundaries.  There is no solid foundation below  the 8-sided section as, when visited, there were 2 deep rabbit holes in it. The "wall" consisted of a coarse mixture of cement with sand and contained numbers of sea shells: 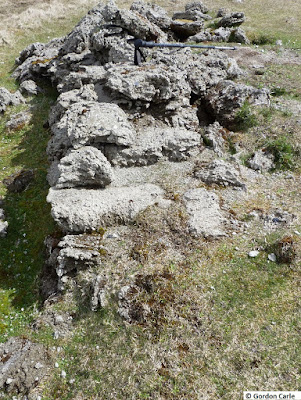 Nothing was found to suggest that any structures on the site were completed.

VHF D/F site near Isbister, Whasay.  For two reasons it is possible to describe this place more fully; firstly, there are more substantial remains and, more importantly, I was fortunate enough to meet someone who was employed during the building of the site. The construction of the operational element of the unit took place on "Willies Wart" a small hill about 280' high, just to the north of Isbister. A track had to be laid a distance of about half-a-mile from the bottom of the hill. To begin with a few  recent pictures of the location. 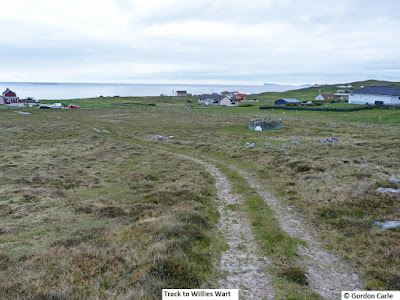 At the top of the hill, close to an historic cairn, a flat, octagonal shaped area of concrete about 12' to 13' across at its widest point,  can be seen: 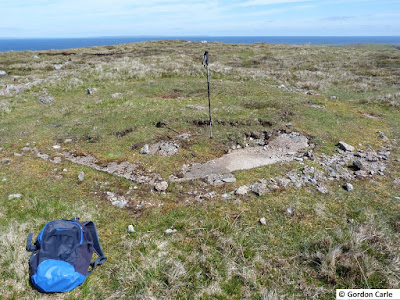 At intervals around the octagonal shaped concrete are strong but bent bolts which were possibly used to secure something: 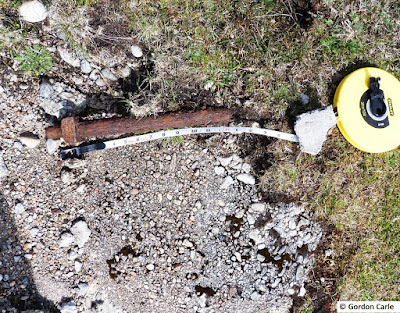 Close to the concrete base lies a large amount of rubble. containing  blocks which, from their content, look as if they were manufactured near to the site: 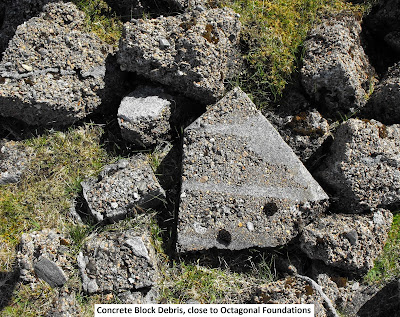 A large amount of interesting information was gathered from a few Whalsay folk. Mackie Polson was able to say that there had been 2 generators at the foot of the hill and that a cable had been laid in a ditch alongside the track up to the site. The two "engine beds" are still visible: 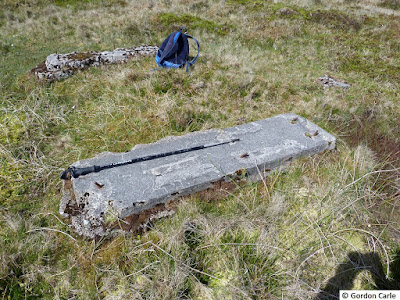 Mackie was also able to remember that there used to be the foundations of two nissen huts close by but that they had been hidden when more modern developments took place: 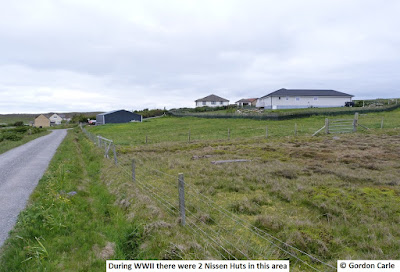 Danny Eunson was able to add the information that a Crossley 50 hp diesel generator from the site was converted to a marine engine and used to power the fishing boat the "Bonnie Isle" when she was built at Scalloway. George Polson, who was born in Isbister, was able to supply a lot of useful data. When he left school in 1943 he was employed to work with the RAF personnel who were constructing  the site. George was in the right place at the right time. He owned a Shetland pony and was engaged to transport aggregate for the track and for the foundations at the top of the Wart. His pay was 2s 6d (12.5p) an hour, more than  many a skilled craftsman could earn in those days.
He recalls that a wall was built around the octagonal foundations at the top of the hill and that a 3 storey wooden hut was put up within the wall. He thought that it was about 30' tall and a ladder was fixed at the centre enabling ascent  to the top floor - there were windows on the top floor. He remembered being on the top floor and dropping stones down through the opening for the ladder access. He didn't recollect any equipment being installed before work was discontinued.

VHF DF site at Eshaness, Shetland Mainland. The remains at this location are the most complete of the 3 Shetland sites that I have visited. An octagonal brick-built enclosure is still standing: 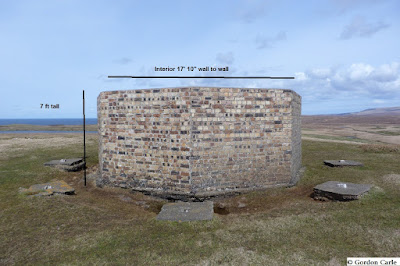 Outside the wall and at each corner of the octagon the stumps of inward-sloping wooden posts can be seen: 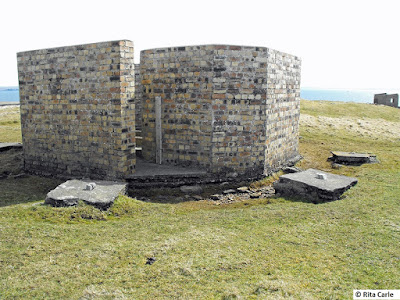 Inside the wall extensive foundations remain: 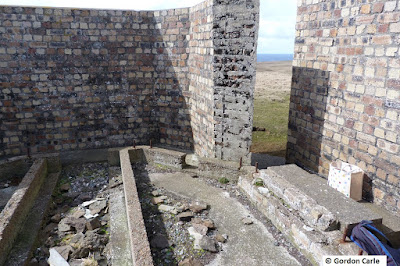 The disturbed soil from a cable run heading north-eastwards from the enclosure can just be traced. It leads to the foundation of what appears to have been 2 nissen huts: 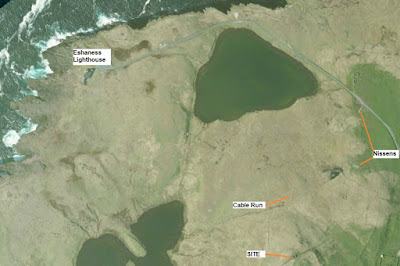 The remains of  the southerly of these huts look like it was probably for accommodation: 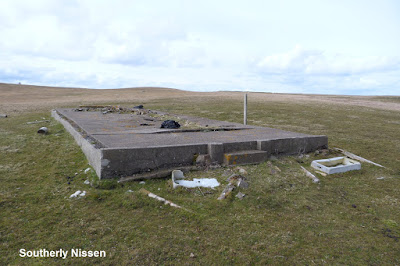 The other foundations are beside the current roadway - I believe that this hut used to house generator equipment: 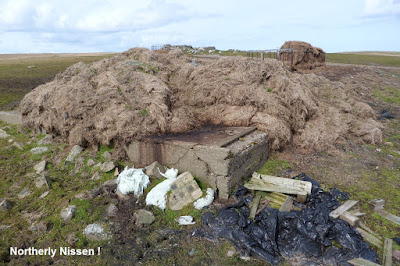 VHF DF site at Hill of Swinister, Shetland Mainland. I am grateful to Sammy Sjoberg for bringing this site to my attention. I have yet to visit the location but intend to do so when the opportunity arises. First of all, 2 photos sent to me by Sammy: 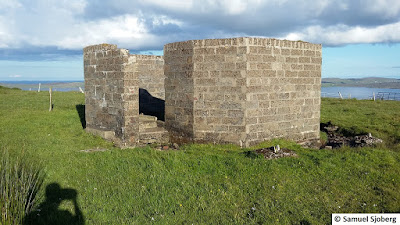 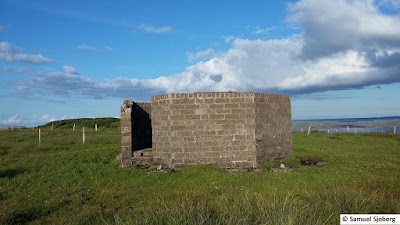 The Domestic accommodation is a few hundred yards NE of the octagonal structure. Another picture from Sammy and two pictures from Martin Briscoe: 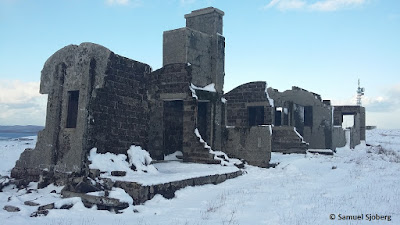 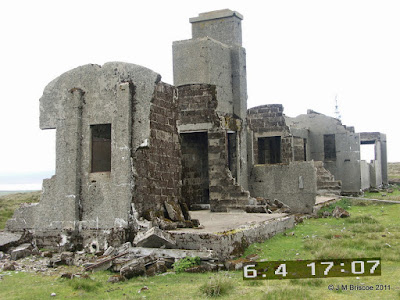 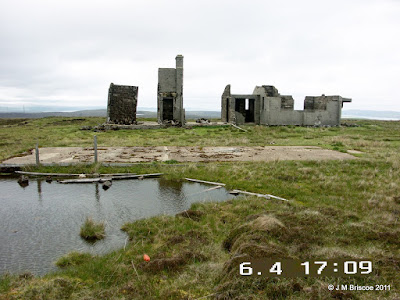 The following aerial photo belongs to Canmore (Royal College of Ancient and Historical Monuments Scotland) and can be seen in it original context here -  http://canmore.org.uk/collection/1682616  : 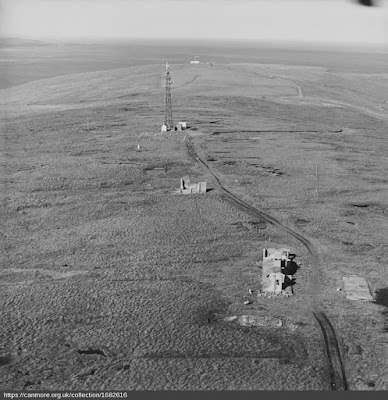 In the Canmore picture above the domestic site is in the foreground, whilst the octagonal walls are just the right of the rectangular building close to the horizon in the centre of the picture. I will update the information about this site if more data becomes available.

There are numerous similar sites in the rest ot fhe UK, from Orkney to the south coast of England. Not much information is readily available about any one site but, together, the pieces of data from a number of sites can give an idea of their role/s.

Some other UK VHF D/F Sites. Some of the UK sites I have  found reference to are shown below. They all seem to have/had octagonal walls, containing octagonal  concrete foundations, in common:

Some points for consideration.
Whilst some of the explanations with each site may vary, they seem to have some common properties. The octagonal wall contained a 3 storey "windmill" type building 25 to 30' tall. It was wooden to reduce the interference to radio signals and a number of descriptions refer to an internal ladder to the upper storey, which itself had a number of windows 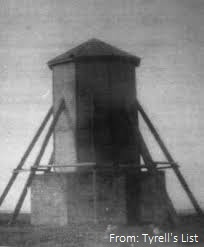 Some sites mention that the wooden walls were double-skinned, the gap designed to contain stones to provide a degree of protection from attack. The need for inward-leaning wooden stanchions, with their bases outside the wall to support the wooden building, is also a recurring theme. Being VHF there was no need for large antenna, each element being just a few feet long. The next picture is from the AP2521 and shows a mobile VHF DF unit it the '50's. However it does give a good example of the size of antenna required: 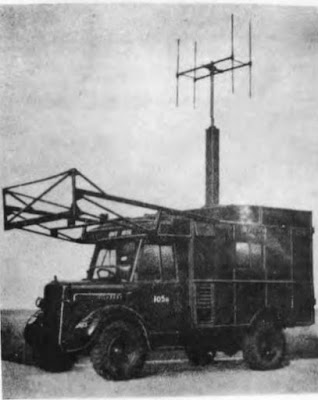 The static sites would have had their antenna  rotated by some kind of mechanism from within the hut.

The power sources mentioned seem to be Lister Blackstone or Crossley generators and there is some evidence that 110 volt DC power was used. Almost all the sites listed earlier are referred to as VHF but there are variations in their assumed roles. However, the known RAF operated sites nearly all refer to a "homing" role for friendly aircraft. The three RAF sites in Shetland on Unst, Whalsay and at Eshaness were never completed and I assume that was because their designed role was better performed by more modern technology. Improved navigation systems like H2S, OBOE and the later versions of GEE were proving to be very helpful. Certainly, RAF heavier aircraft like the Lancaster, carried direction finding equipment which enabled the crews to home in on signals from ground stations - at least some of the RAF D/F units must, therefore, have been able to transmit as well as receive - ie, they were not just "listening posts"

I am indebted to Logaston Press for allowing me to reproduce the next picture. It is of a site similar to the three in Shetland - at Garway Hill in Hereford - and comes from a book entitled "Garway Hill though the Ages" - first published in 2007. The photo was taken in the mid 40's and is the best I have seen of the type of wooden hut used on these VHF D/F sites: 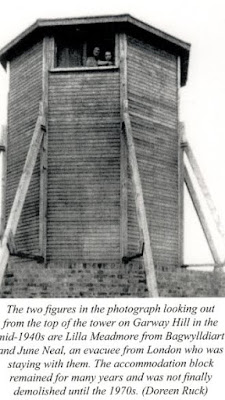 The type of wooden hut must have continued in use long after the war. This picture is from AP 2521A and shows a hut from the early 50's, abeit with an external ladder and with the windows at a different level: 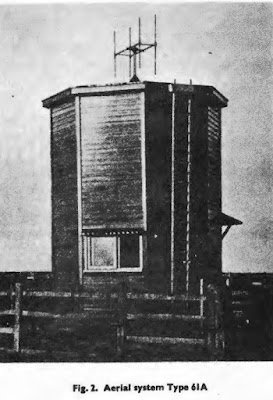 Over the years many hundreds of these VHF DF installations were constructed. The buildings were sometimes octagonal, hexagonal or quadrangular. Sometimes the huts were wooden and sometimes made of brick. Most sets were static but some mobile units were introduced. In the RAF they became known as CRDF - Cathode Ray Direction Finding - and were usually located on, or near, airfields.  A picture of a typical 1950's RAF CRDF site: 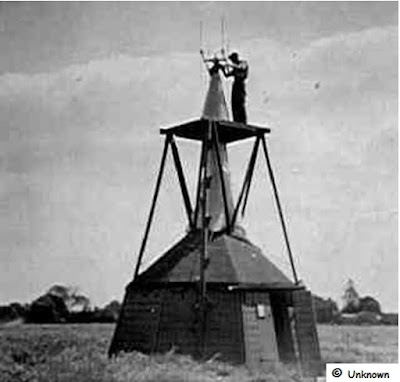 They were used as navigation aids and for early QGH landings. QGH was a term used to denote procedural descents through cloud. Using the DF site and airborne radio equipment aircrew could descend in safe areas on safe headings when the ground was obscured by cloud layers. The systems saved many lives.

I would be happy to hear from anyone who has more information about WWII D/F sites in Shetland. In the meantime, I would like to acknowledge the assistance I have received from the following sources; however, the mistakes and misconceptions are all mine!

Some WWII Direction Sites in Shetland Part 1 is here: