Leslie Fishman, known to all his friends as “Lez”, was posted to Saxa Vord in 1963 after completing a Fitters course at RAF Locking. During his 18 month tour he seems to have had a very active life, both at work and socially. Luckily he took many photos during his time in Shetland and has been kind enough to allow me to reproduce some of them here.  The first picture shows Lez climbing the Transmitter Tower on the Ward of Norwick. 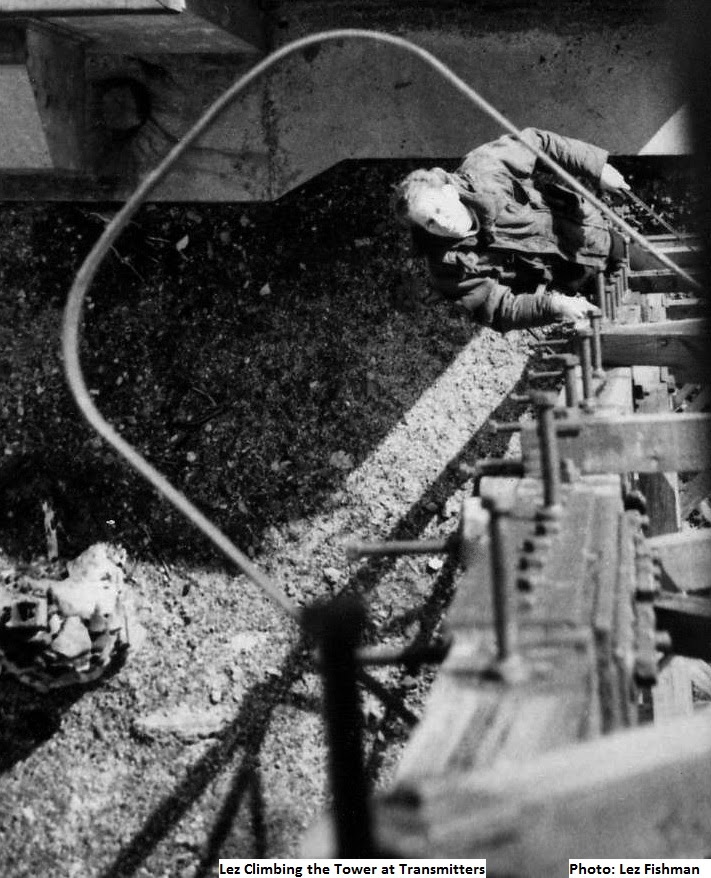 In late Aug 63 the new radome for the Type 80 was completed by Norwegian contractors and handed over to the RAF. Some flight trials were started at the beginning of Sep but very early on severe gales damaged the new radome and the Type 80 had to go off the air again until mid Nov. I hope to write a separate section about these events in the future. RAF personnel were heavily involved in making repairs to the dome and the next picture & enlargement from Lez show Muckle Flugga through the hole left by a missing panel. 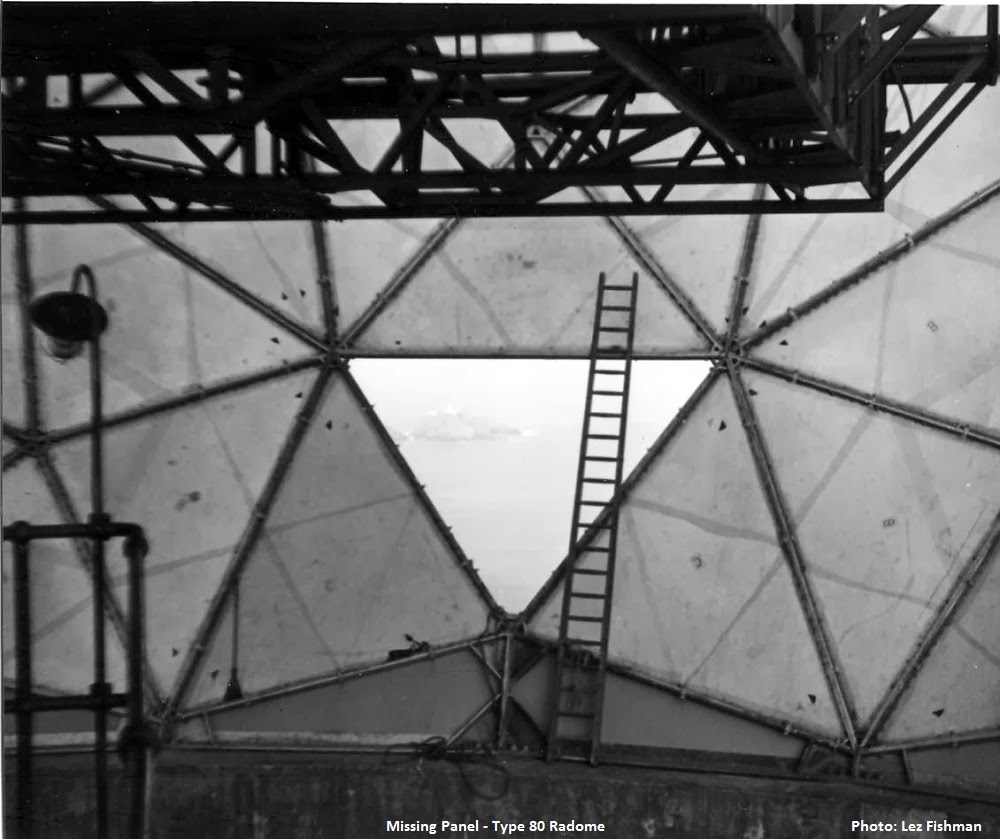 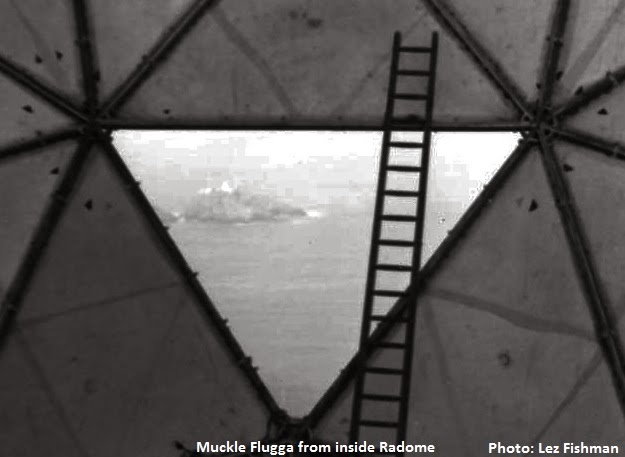 Lez has also provided a very good early shot of Saxas Type 13 and a very rare photo of the Type 14, which was removed from service in Sep 64. 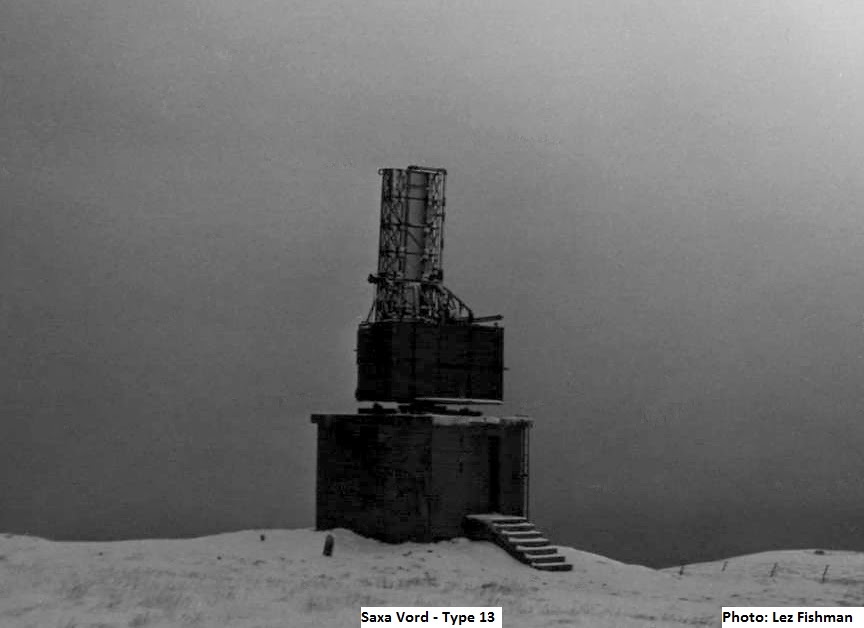 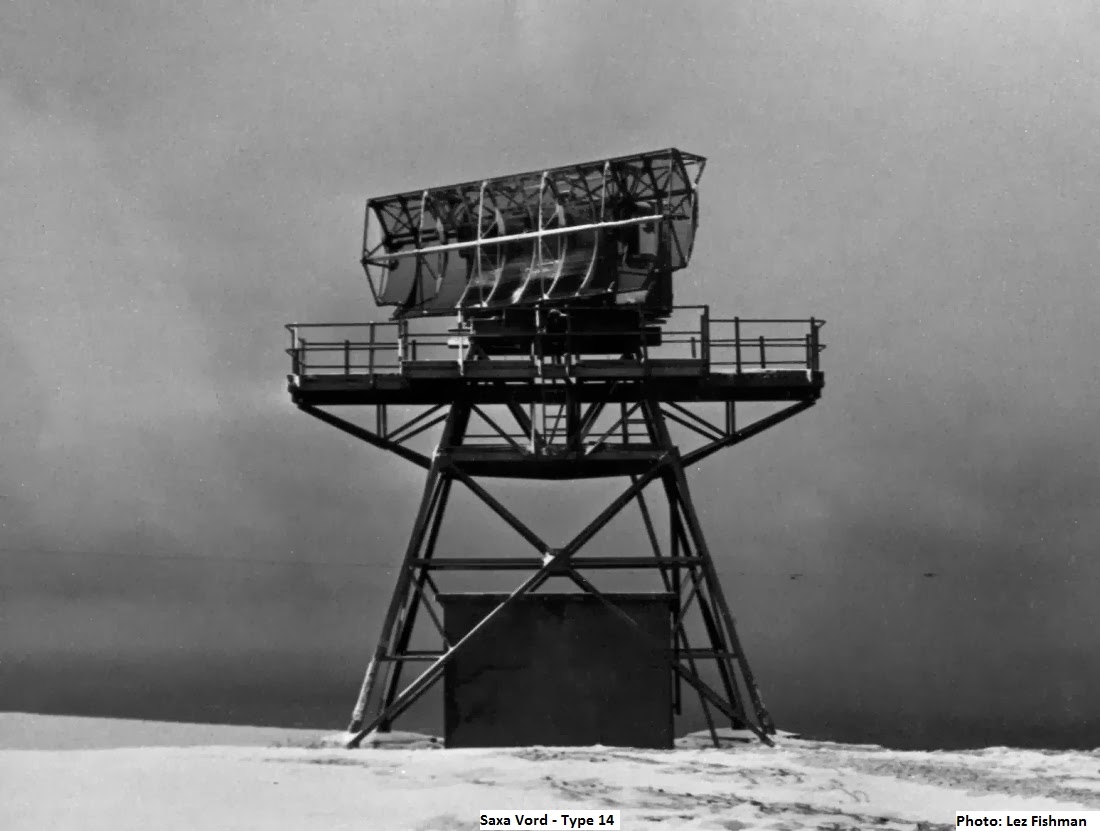 The next two pictures show weather conditions seen by most servicemen completing a tour at Saxa. The first was taken on the west side of the Loch of Cliff and shows Saxa in cloud: 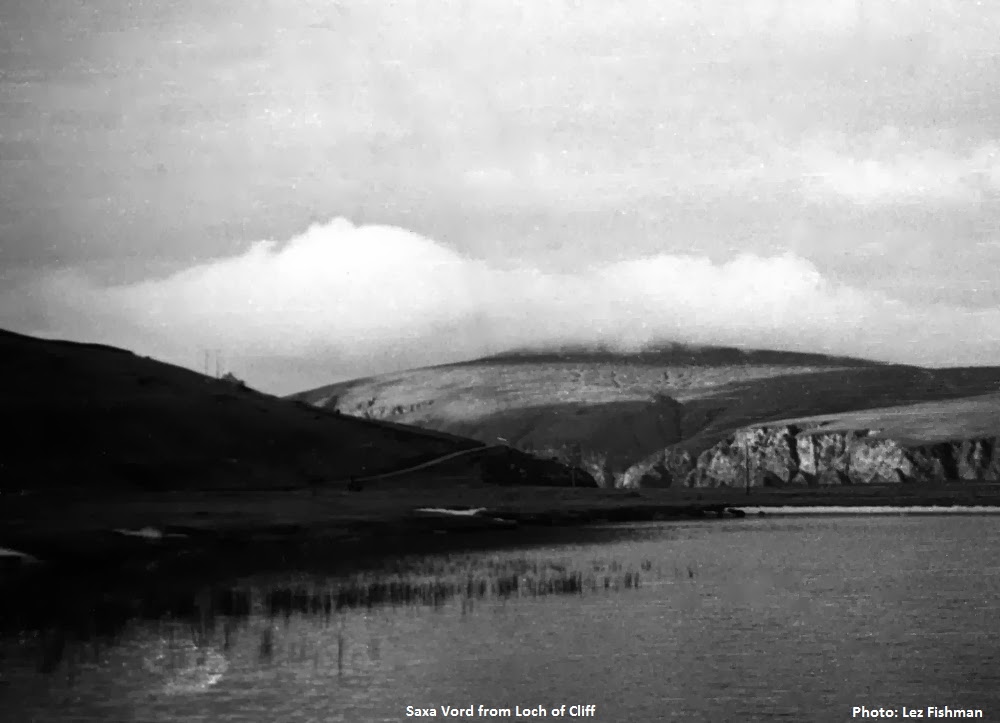 The second was taken from the radar heads and shows Burrafirth in snowy conditions - the Ace High Tower and building can be seen in the foreground. 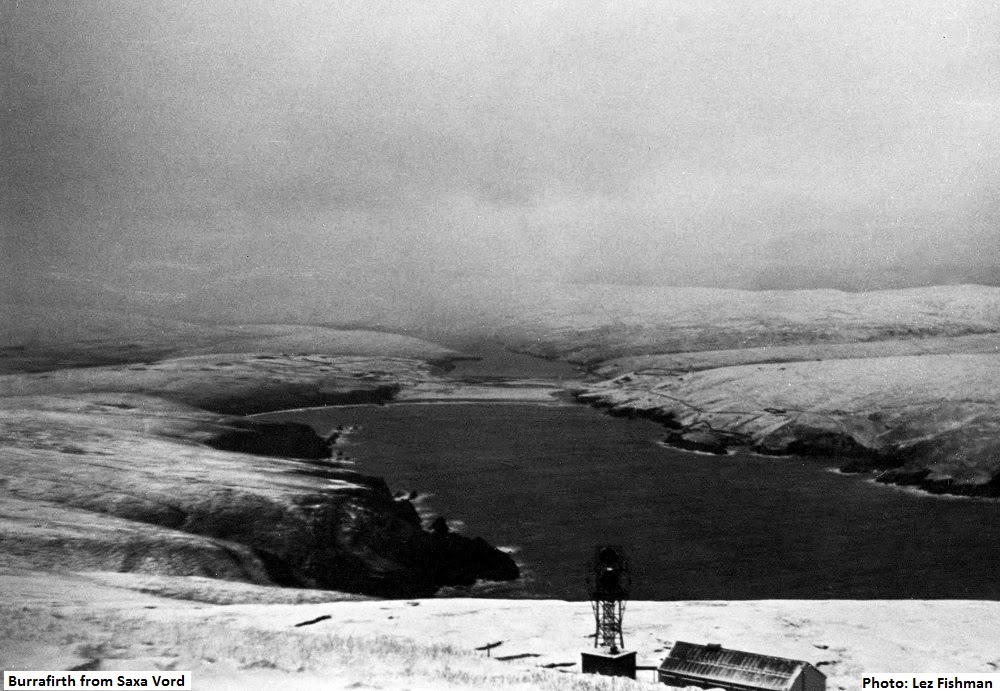 Some pictures, taken on Unst, follow.  The first is of Lez at the Loch of Cliff: 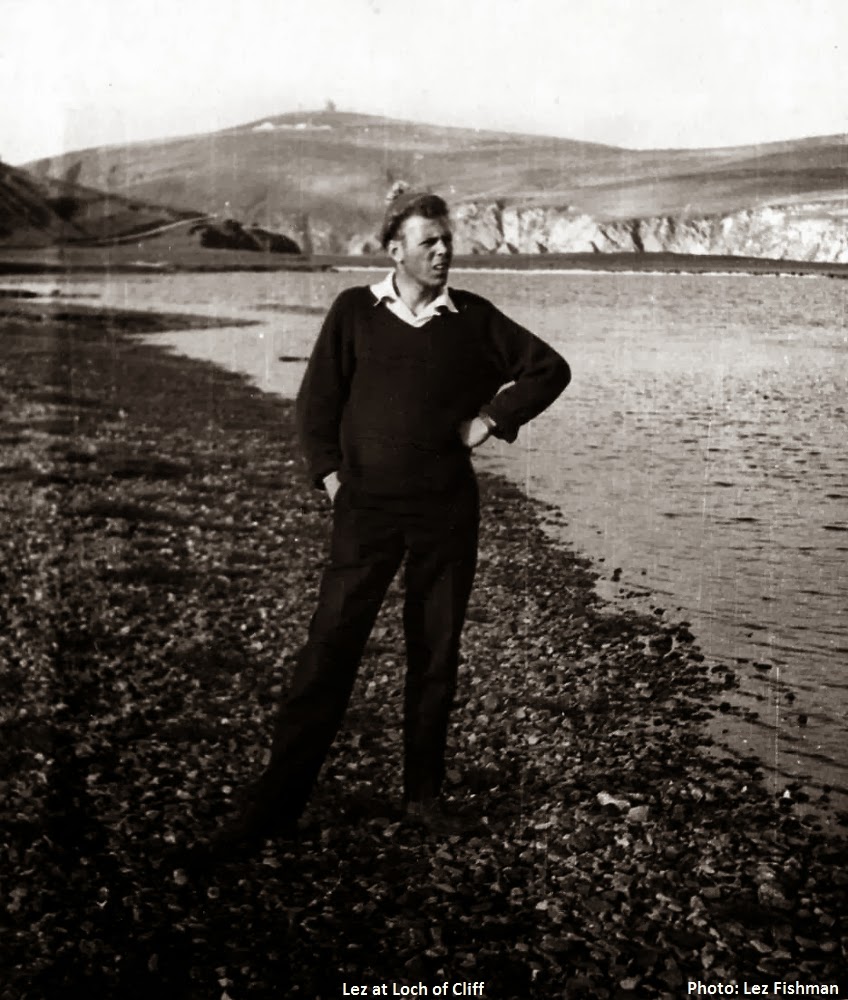 The next is of Lez and his friend “Ginger”. It was taken at the Taing of Dale on the north side at Baltasound, looking towards Nikka Vord. 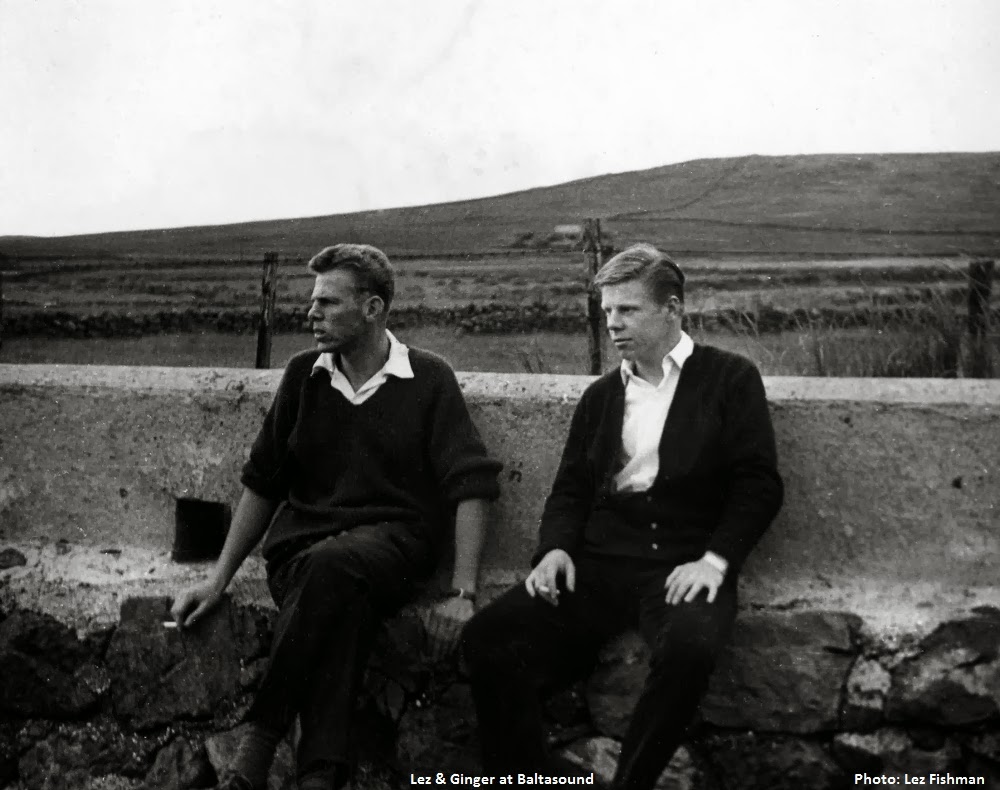 Domestic Site, are Graham “Wally” Wallington and Roger Heath.  Wally was killed in an incident when travelling on the Aberdonian between London & Edinburgh in 1967– I believe an idiot had changed the points as a "prank" and the train was  derailed – he was 24 years old 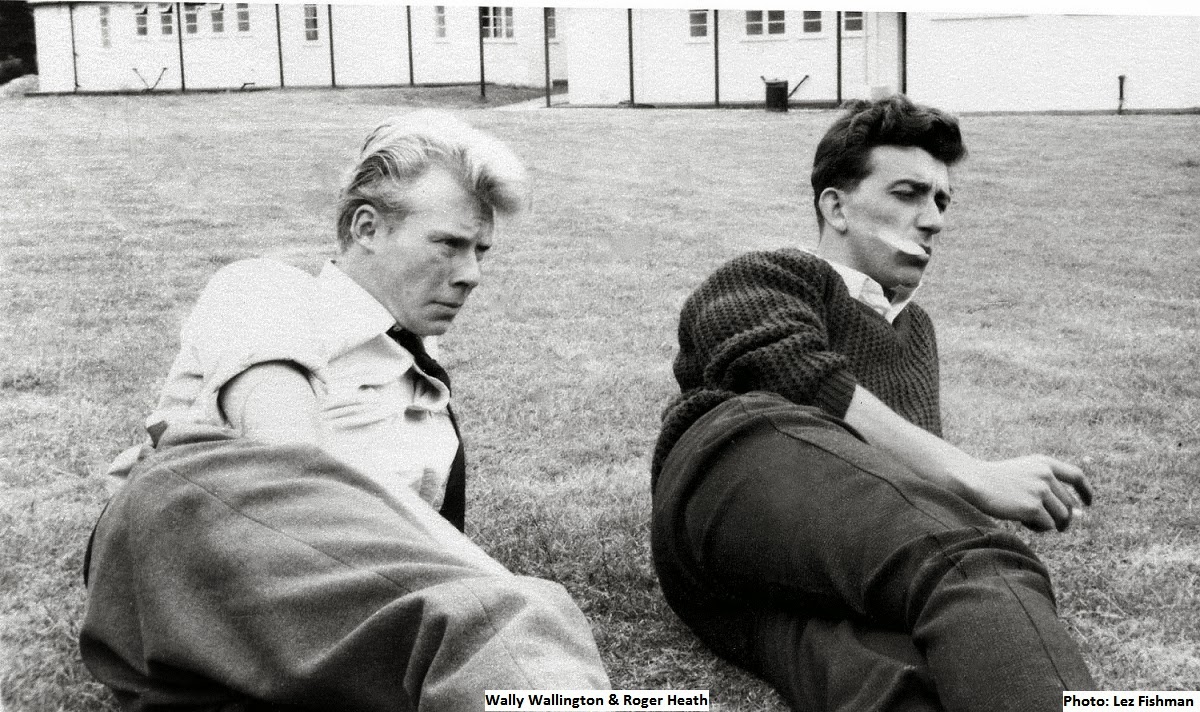 Over the years the Skittle Alleys and Penguin Clubs proved to be very popular. Although a number of different buildings were used during the life of the Unit they were all in the same area, close to the Ice Cap. I would appreciate it if anyone can identify the people featured in this photo from about 1964. Two photos from Pete Brindley follow; the first is of Lez by the NAAFI on the Domestic site and the second was taken at the Baltasound pier – occasionally there were appeals  from civilians and on this occasion help to fix a trawlers radio had been requested. 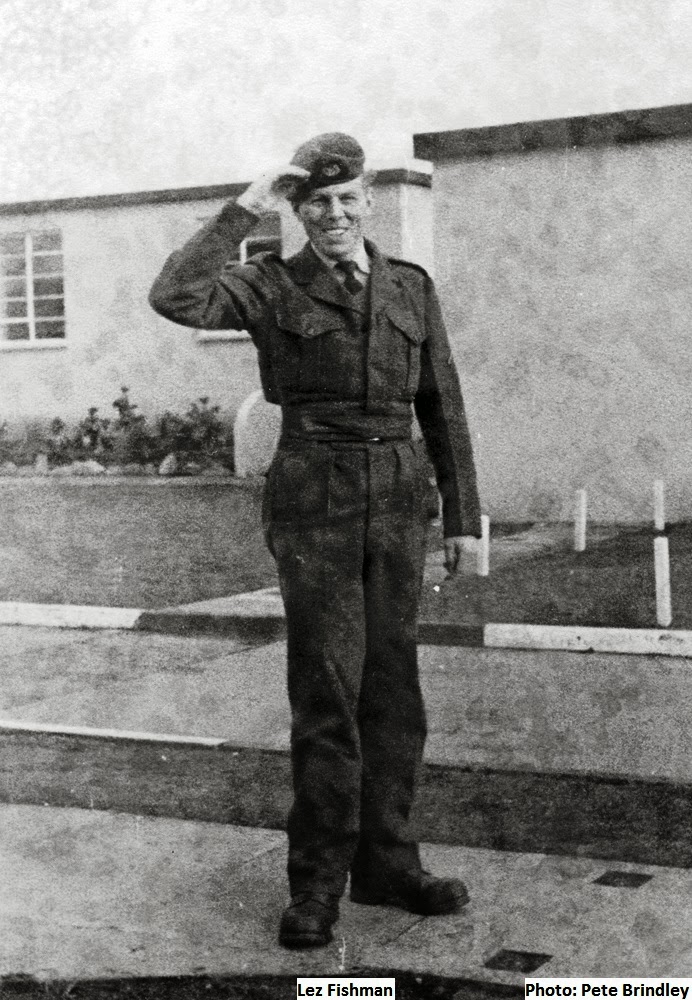 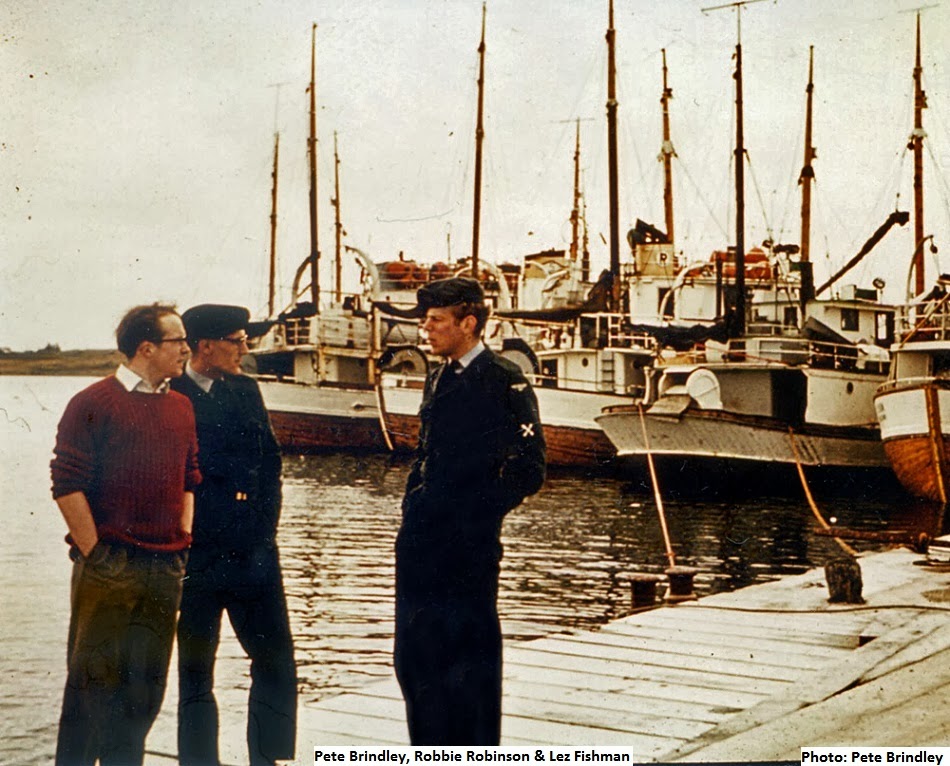 Like many of the servicemen at Saxa in the era, Lez took the opportunity to visit Lerwick as often as he could – not so easy in the days before the Inter- Island RoRo Car Ferries.  Lez managed to do 4 months on Unst before he was able to get to the “big city” for the first time – the reason/excuse was a soccer match, he night-stopped in the Seaman’s Mission on the first of many such trips. He blames Pete Brindley and a number others for leading him astray after that. He remembers being in the Grand Hotel in Lerwick on the night President Kennedy was shot and celebrating his 21st birthday with the Lads in Lerwick in June 1964. The next set of photos was all taken in Lerwick. The first shows the Earl of Zetland, tied up at the Victoria Pier. 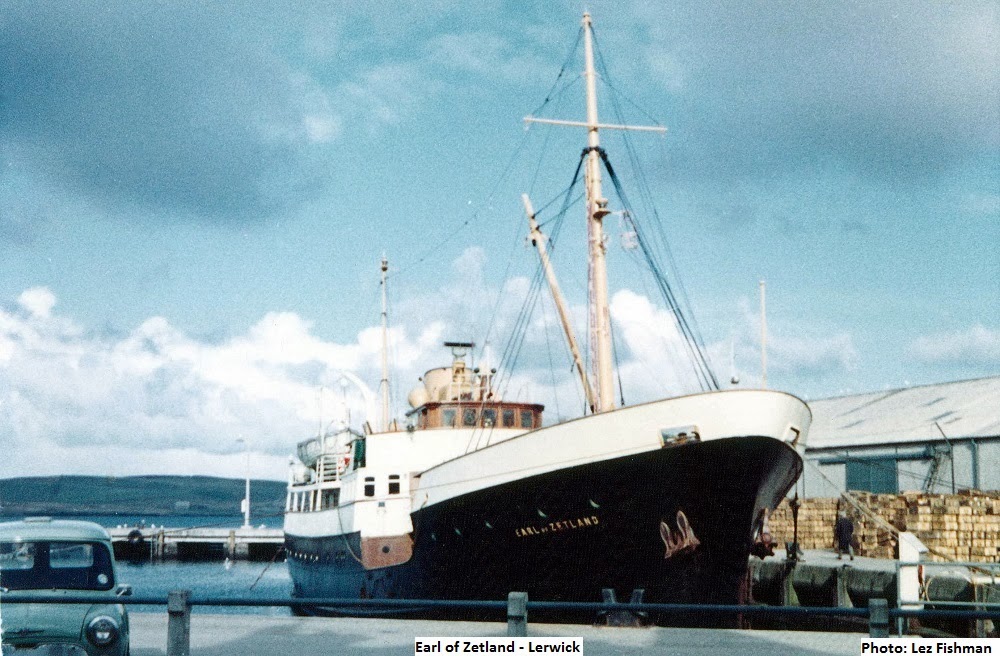 HMS Bilderston was built in 1952 as a Ton class Minesweeper. By the early 60’s she was being used for fishery protection duties, (the first Icelandic Cod War took place in 1958). She was finally broken up in 1988. 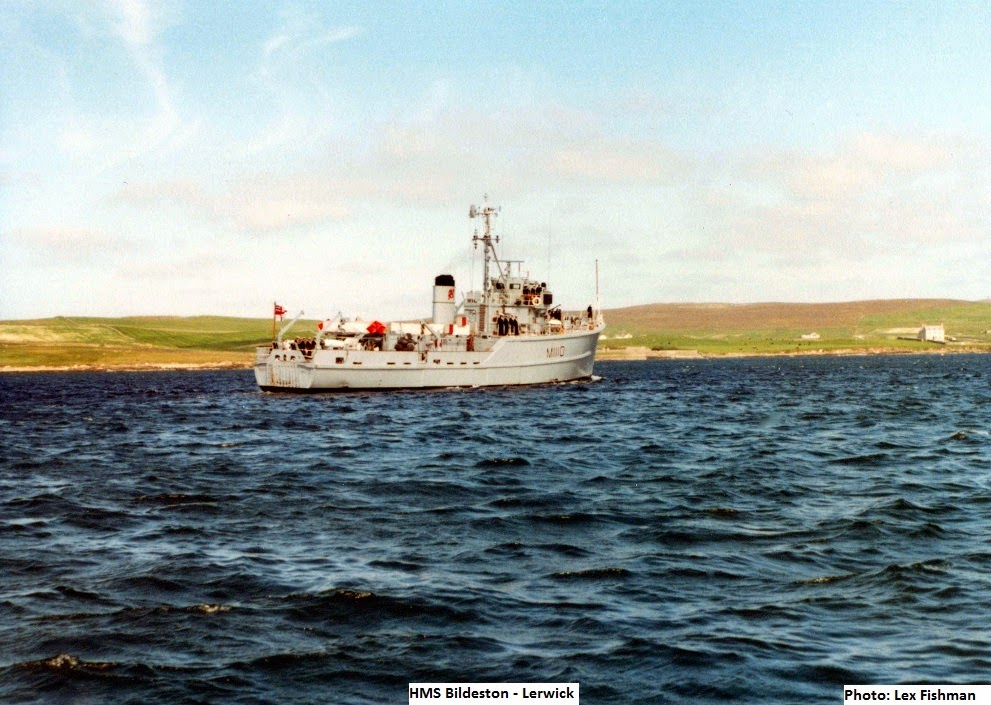 Lerwick is the home of the largest of the Shetlands “Fire Festivals” – Up Helly Aa, which takes place in late January each year. The following photo shows a participant or Guizer as known locally. 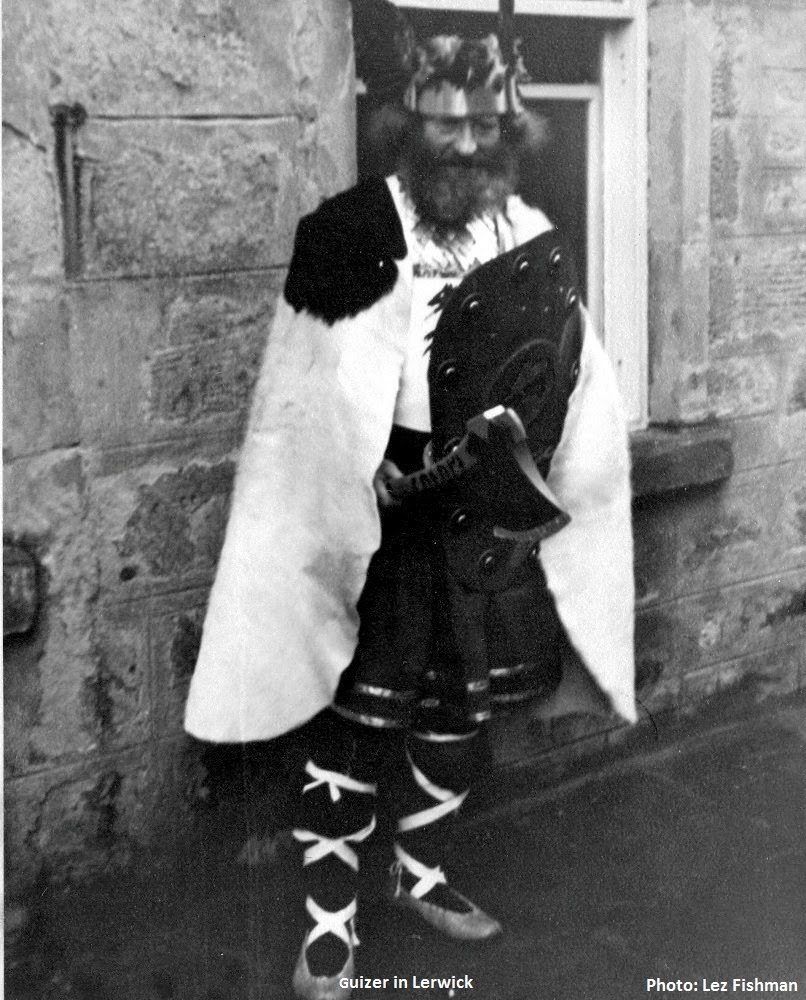 Most RAF personnel visiting Lerwick in the early 60’s seem to spend a fair amount of their time in the Lounge Bar in Mounthooly Street (still a popular venue today). Unfortunately, Stanley Manson who used to make sure the service visitors were welcome, is no longer with us. Help in identifying some of the customers in the next picture would be appreciated. 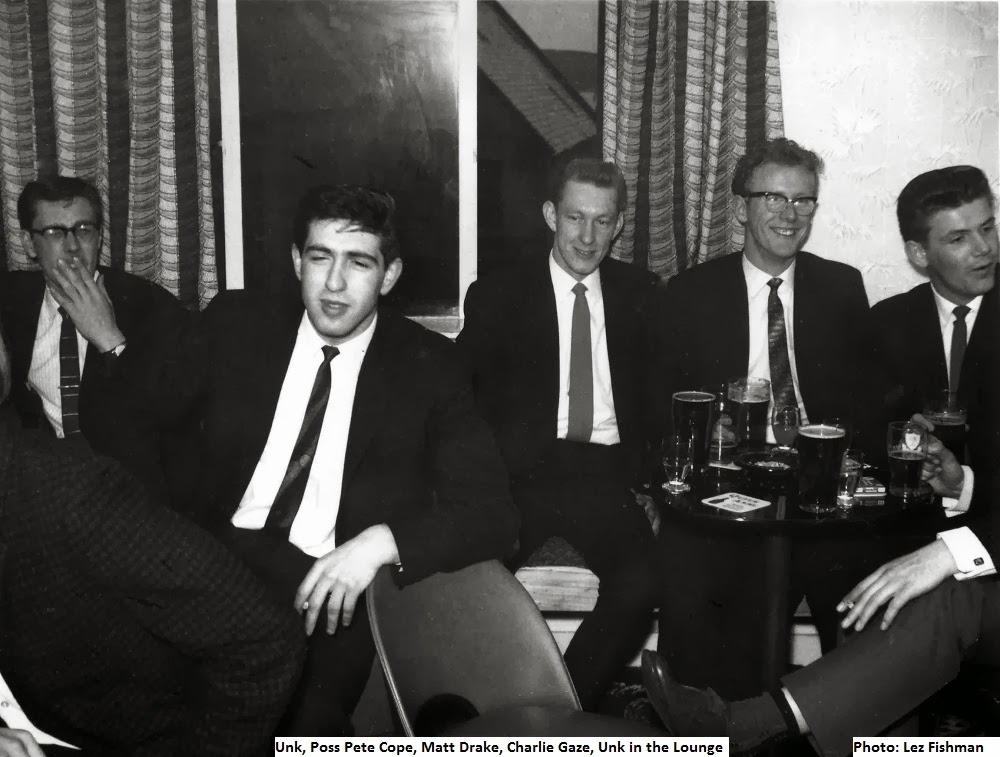 The Lounge Bar was not the only establishment in Lerwick to be supported by servicemen – the Grand Hotel in Commercial Street had it share of visitors. One again assistance in identifying the participants in the gathering below would be helpful. The only definite ID is of Harry Cairns (in the middle, with glasses). There can’t have been too many pipe-smoking ladies in those days! 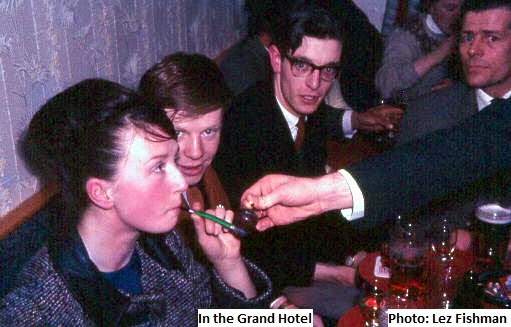 It was not all a one way trip. According to Lez he was “persuaded by Sqn Ldr Whiley (Saxa CO May 63 to Oct 64) to run the NAAFI, which I did, organising the first dance where the girls came up from Lerwick instead of us going down, a roaring success I have to say. Bloody great mountains of cans out the back and I had to keep running to the Officers’ Mess with hundreds of pounds taken across the bar. The girls from Lerwick were chaperoned by locals for us”.
The final photo in this section features the wedding of Mick Harbord, an airman from Saxa and Annie Johnson. I am grateful to Mick McDonald for help in identifying the members of the group. 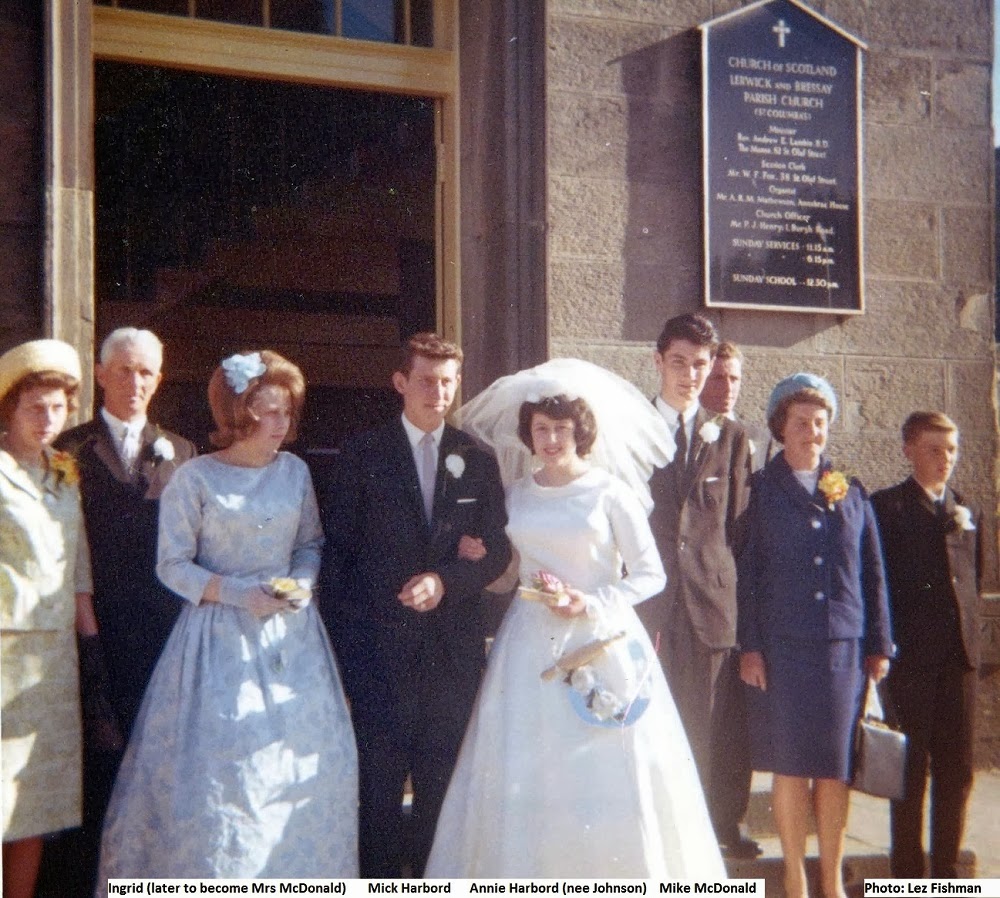 On leaving Saxa Vord Lez was sent to do a conversion course at RAF Locking, in Somerset. Lez must have enjoyed his time in Shetland - he returned to marry a Shetland lass in 1966 and has come back to the islands frequently ever since. A poor quality reproduction of an article which appeared in the Shetland Times issue of 16 Oct 66 is below: 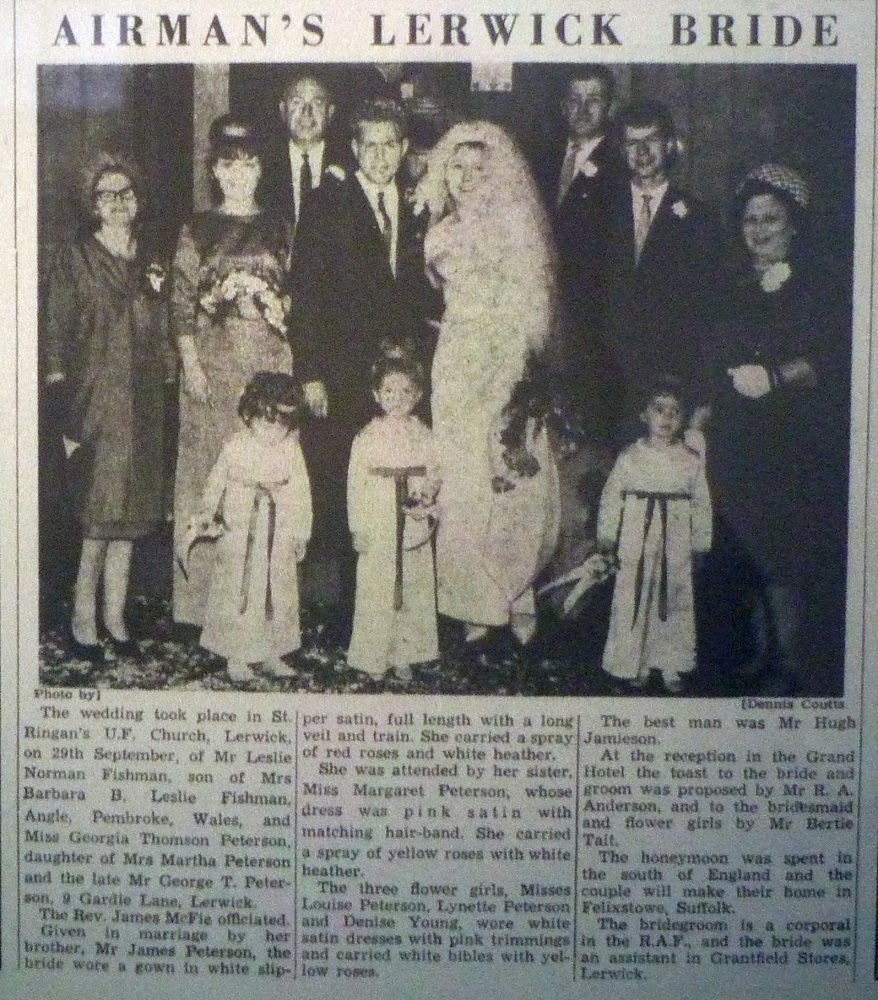 My thanks to Lez for allowing me to publish some of his recollections. There are more of his photos and I hope to release a “Lez Par 2” sometime in the future.
CONTENTS LIST
http://ahistoryofrafsaxavord.blogspot.co.uk/2012/03/contents-list.html