The Admiralty Building and the Annex were constructed in the mid 50’s as part of the Admiralty Experimental Station, Unst. The Admiralty Building was finished slightly before the Annex, which was completed around the end of 1956. The last use of the 2 buildings by the Admiralty was in 1977 and they were transferred to the RAF shortly thereafter. There were Health & Safety issues with the 3 storey Admiralty Building (fire escapes especially) but there were no such problems with the Annex. The RAF made use of this building from about 1980 onwards.
The sections which occupied the Annex changed over the years and internal partitions were erected, changing the number and size of the rooms. I believe that when the RAF first started using the building the ground floor was used as an engineering workshop whilst the top floor was occupied by the Op/Eng Registry and by the OC Radar Servicing Flight. As the years went by different sections moved in and out. I would be interested to hear from anyone who worked in the building.
I was lucky enough to spend some time in the Annex in Jun 2012 and took some photos. As with an earlier section on the R10 there was no power, so the pictures had to be taken with flash and/or the natural light available. Because of changing use, I have resisted allocating room titles to the photos. The first 2 photos show the access to both floors of the Annex from the R10 corridor. (Left click on pictures to enlarge). 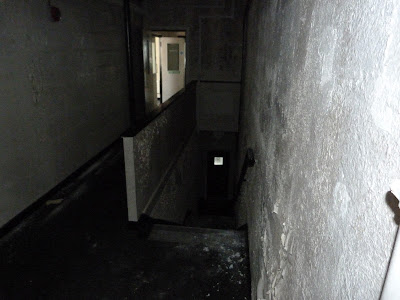 The next set of pictures is of the Upper floor of the building – the whole place has gone beyond my DIY skills! 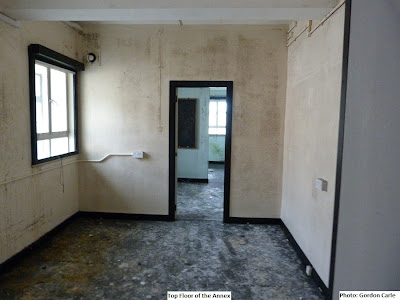 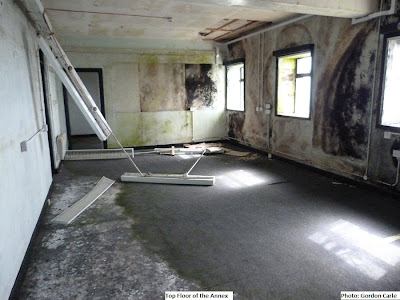 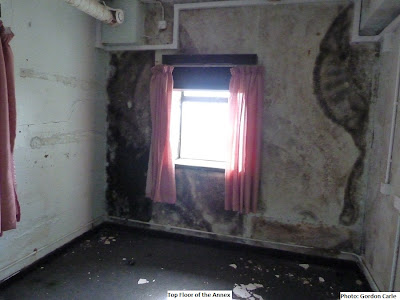 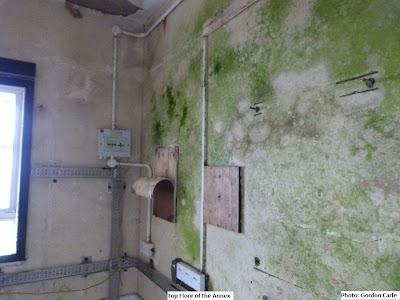 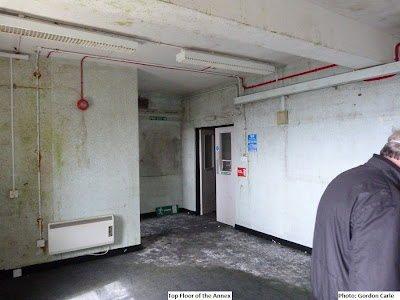 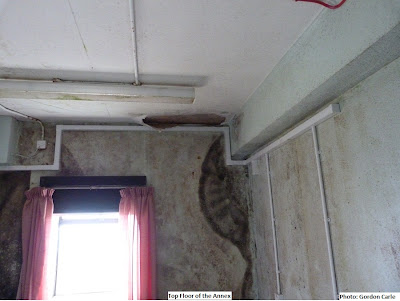 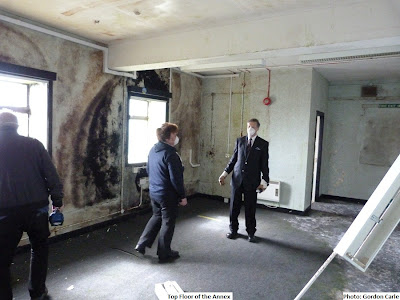 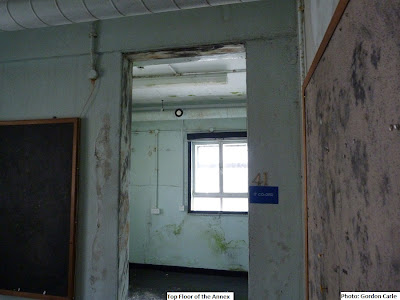 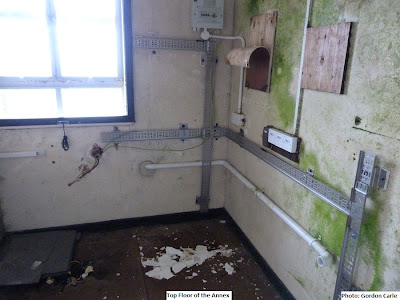 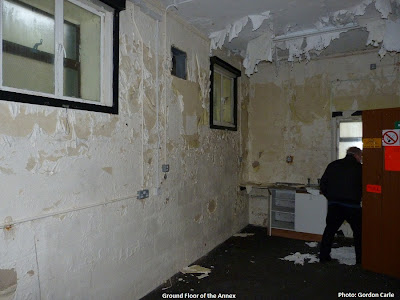 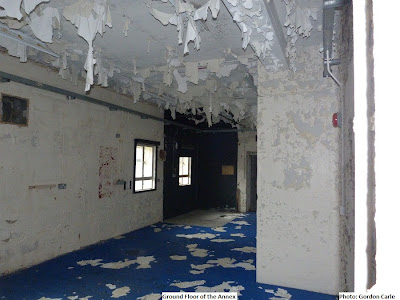 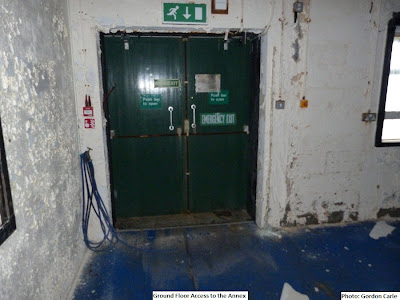 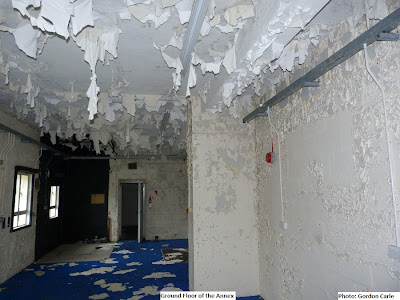 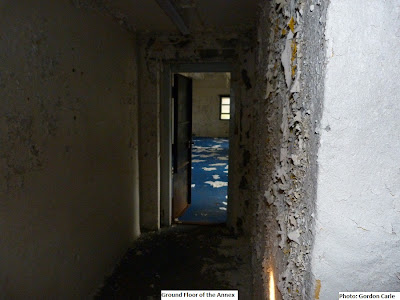 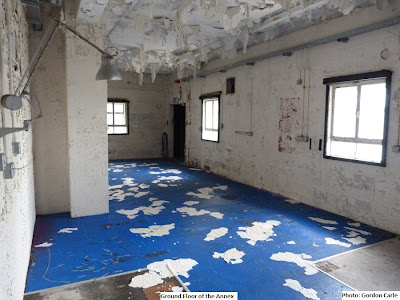 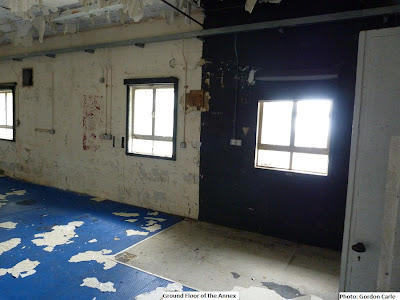 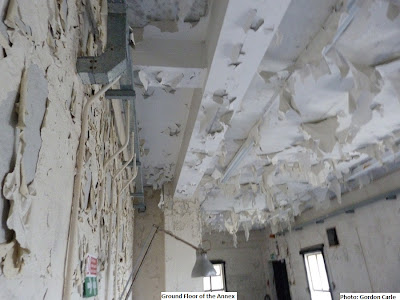 In 1960 a pre-fabricated structure, known as the Cosley Building, was constructed to house American Generators for NATO/US antisubmarine trials. A short corridor was erected to connect the Cosley Building to the Annex. The next 3 photos show the entrance to the corridor, the corridor itself and the end of the corridor, which was blocked up when it was no longer needed (the Cosley Building was moved to the Domestic Site and became one of the incarnations of the Penguin Club in the mid 70’s). The young gentleman in the first 2 photos, John Thomson, helped build the corridor. 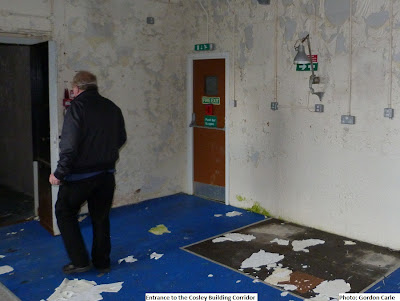 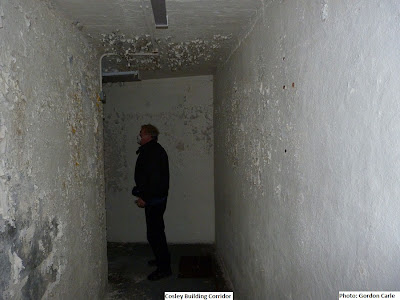 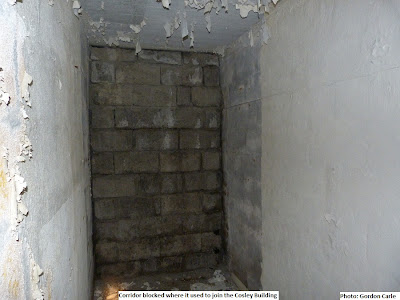 The next picture shows the stairs from the Ground Floor of the Annex back up to the R10 corridor – yes it was dark and the flash didn’t always work! 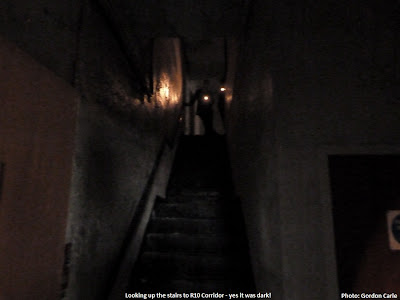 The last 3 photos were taken outside of the building. 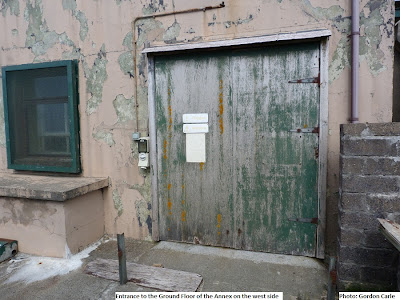 I have written 4 sections previously about the operations from the Admiralty Building and will be writing more in 2013, in light of new material. Links to the 4 previous sections are below:
Admiralty Building & Underwater Cables Part 1 (18/9/2011)
http://ahistoryofrafsaxavord.blogspot.co.uk/2011/09/admiralty-building-and-underwater.html