Memories of a Fireman – Nick Broom

I’m grateful to Nick Broom for allowing me to reproduce this article, which he originally wrote for the RAF Fire Service Association.

The overnight sleeper pulled into a very cold Aberdeen Station in early April 1976, and a somewhat weary 19-year-old SAC Nick Broom made his way on an even colder bus to Dyce Airport. The flight to Sumburgh was uneventful in the aging Viscount, and the Logan Air Islander was ready and waiting for me. So here I was in Shetland – it seemed a million miles away from the comfort of RAF Benson, my first tour of duty after passing out from Catterick.
I was the only passenger on the Logan Air flight to Unst (the most northerly inhabited island in the UK), so I had the front seat beside the pilot (they only had one pilot and no room for a stewardess!). On reaching Unst we had to ‘buzz’ the very short rough airstrip to chase off the sheep; a tight turn then saw us safely on the ground. The Fire Section were of course expecting me and the HCB Angus Firefly with crew of two (yes 2) was there to collect me and take me to the camp. And so begun that wonderful two year tour at Saxa Vord.
When people ask me what it was about Saxa that made it such a special tour I find it hard to give any kind of meaningful answer. The local people up there were as friendly and generous as you could ever wish to meet; the scenery is stunning and the weather is very atmospheric. The Fire Section and other RAF personnel (even the Scopies!) were just a great mix, with all the right characters. The bottom line is that to really understand the ‘magic’ of a tour at Saxa you need to have been there! If you have, you will hopefully know what I mean...
The highest recorded wind speeds in the UK have been recorded on Unst (I think), and the winters could be long, dark and cold. It was on such a winter’s morning that I had cause to take the DP 1 from the Fire Section, which was up on Saxa Vord hill beside the radar complex, down to the domestic site. This route involved in places a steep descent on a narrow road that was only designed for Land Rovers and alike – not a fully laden DP 1. Well that’s my excuse anyway... I was only a few yards down the hill and was in low ratio 1st gear, but the ice was severe and the DP started to slew. Unst is covered in a thick layer of peat and as soon as the wheels left the metalled surface she started to sink – rapidly. 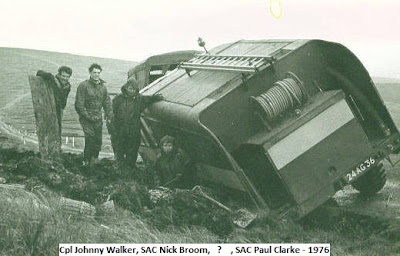 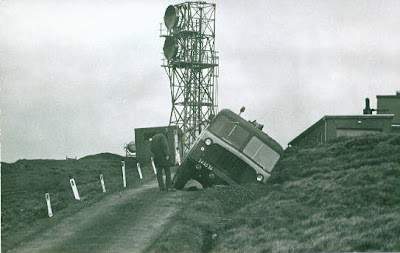 We now had a completely stuck fire vehicle, no fire cover and some very unhappy Execs! OC Eng was there, along with half the camp it seemed, (the photos are courtesy of him), and after much digging, swearing, and embarrassment on my part (and with the help of a crane) we eventually got her out! But being a persistent chap I managed to do the same thing again the following winter, this time with a DP2, in almost exactly the same spot! Once was unlucky, but as I was reminded many times after this, twice was just plain careless! O well, at least I didn’t manage a third.
The Fire Section provided fire cover for the whole island in support of the Highlands & Islands Fire Brigade, so we did get a few shouts; but mainly I remember taking the trailer pump and Firefly down to a small river at Burrafirth, doing a quick pump test then spending an hour or so fishing! The summers were long and sometimes quite warm, so there were plenty of opportunities to defeat the trout. When not sweeping chimneys in the Married Quarters at SHE (Setters Hill Estate), or taking Santa and delivering sweets at Christmas, the other main pastime (during on-shift time I hasten to add) was our little sheep skin enterprise. The Firefly got moved out of the single vehicle bay and the bay was quickly transformed into a hide-processing factory! We took fresh sheep skins (blood and all), scraped off the fat and treated them in chemicals to cure them. They were then left in the small hose store to dry off. You would not believe the smell! The Sgt i/c (not Maurice Reaney shown in group photo) was the main instigator and ‘actively encouraged’ us with this little money making venture..! Would such things happen today? Unsafe, not very professional, but at the time great fun and very memorable... 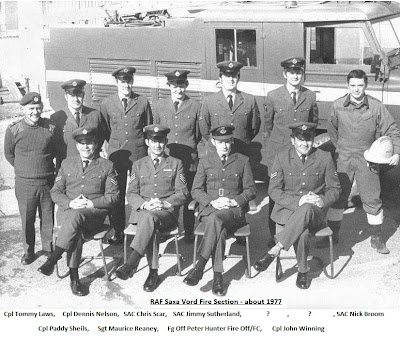 My first tour at Saxa went quickly and I was soon off again to Troodos.  But Unst had captured a bit of my soul and I have been back a few times since.  My last tour of duty back at Saxa Vord was in 96-97, albeit only for just over a year, and I went back there again for the very sad closing down ceremony (and associated drinking!) in 2006. 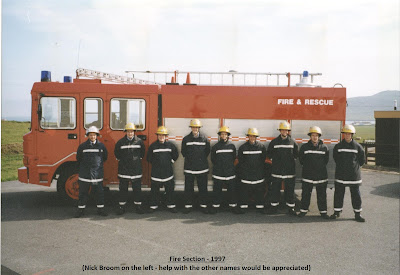 RAF Saxa Vord may now be gone but those halcyon days will never be forgotten, at least not by me, and I suspect not by many others too. 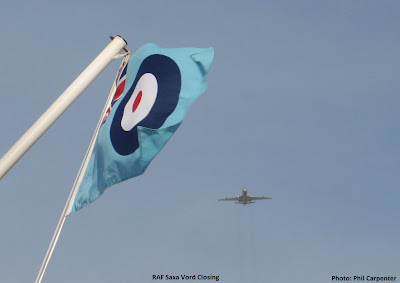 I now run my own Safety Consultancy business and live just north of Aberdeen, so the ferry is always on hand for those future visits back to Shetland – and I do go back. O happy days…

If anyone can help with identities please contact: gordon.carle@gmail.com
If anyone remembers Nick Broom and wishes to contact him: nick.broom@me.com