Many ex Saxa personnel remember nights in the Penguin Club, various quantities of alcohol and many more games of skittles starting than finishing. However, on closer questioning it is noticeable that there are disagreements about buildings and internal layouts. This is because there were a number of Skittle Alleys and because the “Penguin Club” was located in 3 different Buildings over the life of the station.

I believe the first Skittle Alley was constructed in an unused billet in the mid ‘60s. I don’t think it was a “licenced” premise and the main purpose was to be the venue for the Station Skittle League. These activities came to a temporary halt in Apr 68. In that month a detachment of sappers from 15 Field Sqn, Royal Engineers arrived on Unst to build the airstrip. The original plan had been for the army personnel to live under canvas in field conditions – not sure I’d be that keen to do that for months on end in Unst. The camp had some surplus accommodation and decent facilities so the invitation was made and readily accepted. The Wives Club and building housing the Skittle Alley were used to augment the barrack blocks. I’m not sure how long the sappers stayed, probably 4 to 6 months. Their presence had a significant impact, bar profits soared, sporting fixtures were arranged and for the first time there were dodgems on the Norwick Beach using bulldozers! An extract from the Station History follows: (left click on pictures to enlarge).

Following the departure of the army detachment a few enterprising personnel decided to refurbish and improve the Skittle Alley. Most of the work was carried out in the winter of 68/69 and the Sailing Club provided much of the voluntary labour. One of those involved was Jeremy Thornton:-

“The skittle alley was set up down below where the squash court was in an unused billet. Once again the CO was sympathetic and helped us to obtain wood and panelling to make the runway and build a bar. He allowed us to have a barrel of beer behind the bar each skittle night - in the heady days we even provided hot dogs and onions!”
The Building is indicated in the three pictures below: 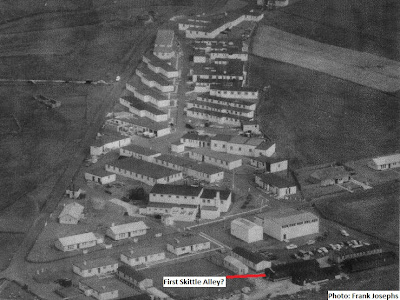 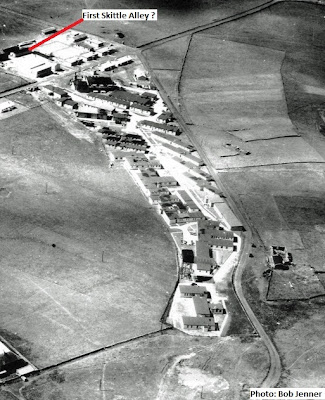 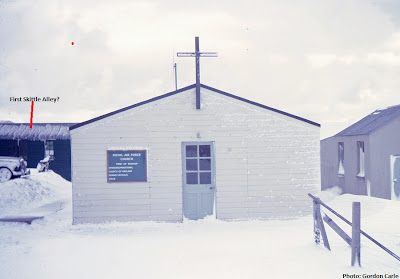 A party was held in Oct 70 to celebrate the opening of the new Skittle Alley: The venture was so successful that it was decided to turn the building into a new social club. The official opening of the “Penguin Club” was on the evening of 29 May 1971, after the Station Sports Day. It was, I believe, possibly  the first all ranks club at Saxa – handy for section functions, charity events and sporting occasions. 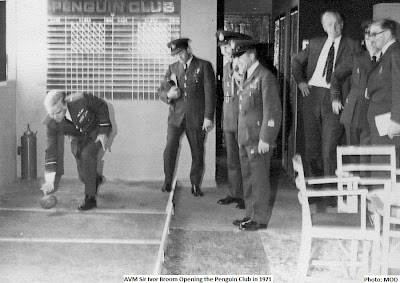 Nevertheless, by 1975 the Penguin Club had been demolished. It looks as if it was a wooden building and it had probably been on site since the beginning - so maybe it was just old age!

Fortunately there was a prefabricated building on the Ops Site which was surplus to requirements.The structure, known as a Cosley Building, had been erected in 1960, and for 3 years housed generators producing 120volt electricity for trials carried out from the Admiralty Building. By the end of 1963 the trials were over. This building was dismantled and part of it re-erected on the Domestic Site, mainly due to the efforts of a scopie called Harry Bowyer. Photos of the Cosley Building at the Ops Site and at the Domestic Site follow: 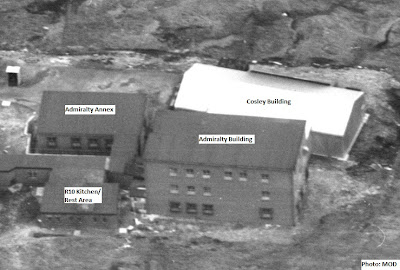 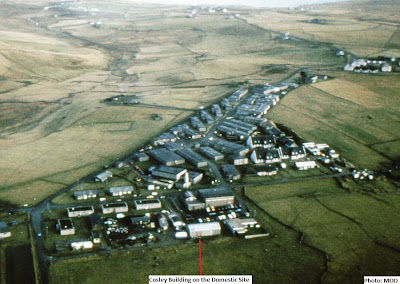 I don’t know if it was Harry who was responsible for the interior of the building but, whoever it was, a good job was done. I have tried to contact Harry on a couple of occasions – maybe I have the wrong email address. 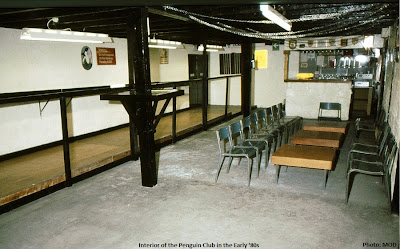 This, the second version of the Penguin Club, was officially opened on 8 Jul 75 by a politician.  Having done a lot of the work, I understand that Harry Bowyer was (not unnaturally) upset not to be invited to the opening!  An extract of the Official Station History is shown below:

Mick Standen (Saxa 78-80) has kindly allowed me to use the following photos, taken in this incarnation of the Penguin Club, from his tour at Saxa Vord: 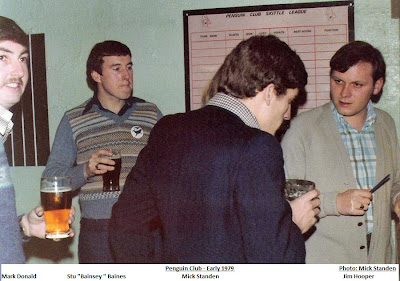 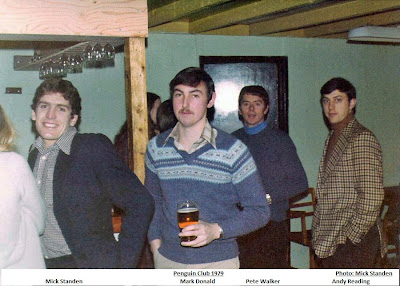 The next photo from Mick shows a team of 6 runners who had just won a 12 mile relay race from Belmont to Saxa. The CO, George Keith, made the trophy presentations in the Penguin Club – he’s in the middle of the back row. (Any help with missing names would be appreciated) 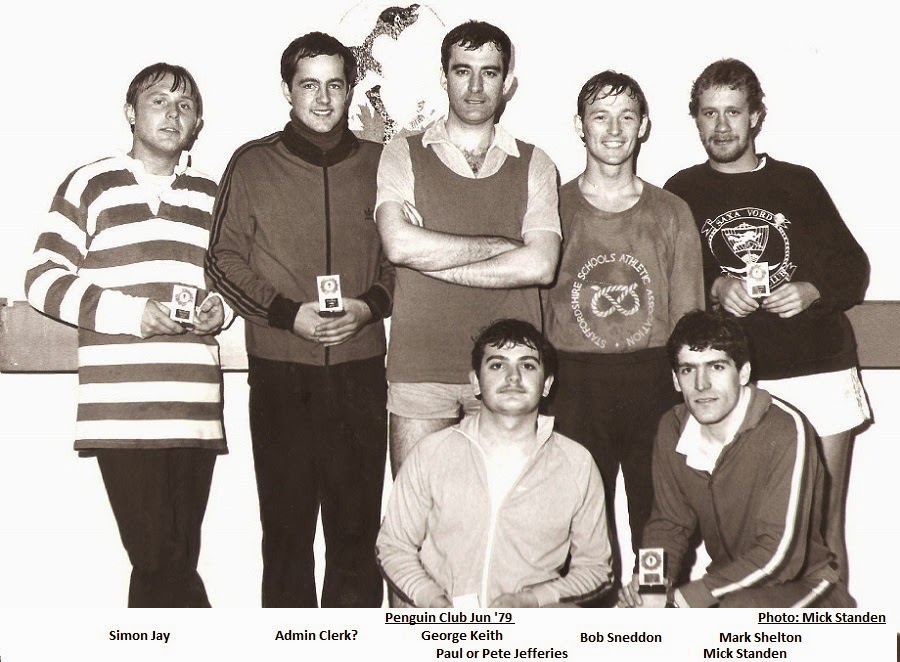 As “they” say – all good things must come to an end. This version of the Penguin Club was also demolished and a new building constructed over the winter of 1991/2. I don’t know why, but I suspect that a metal building, designed to house industrial equipment, may well not have met Health & Safety requirements for an entertainment venue or, like the rest of the camp, it was time for a rebuild.
So – to the third building! This was, I believe, the last of the Penguin Clubs. According to Roddy MacDonald, who had a major part in the rebuild, " All of the doorways, plumbing etc. were designed so that we could recycle doors, loos, radiators etc. from the domestic site buildings which were being demolished at the time, double skin blockwork with full cavity insulation and it cost just under £19,000, a small shedload of guinness and it cost me a Spec. Rec. for promotion! Worth it in all regards!" 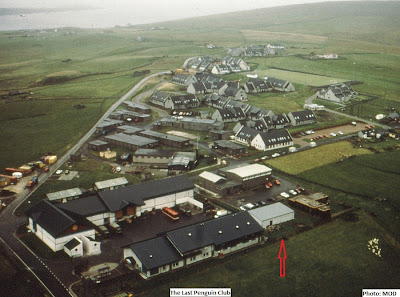 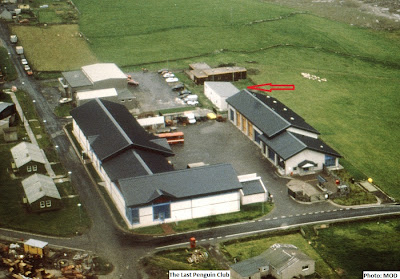 Although it was not an expensive build this last version of the Penguin Club stood the test of time and is still on the site today. I believe that in its later life there was less of the Skittle League atmosphere and a slightly more alcoholic glaze as time went on. I’m grateful to Megan Fielding (Saxa 95 to 2001) for permission to use the following photos:- 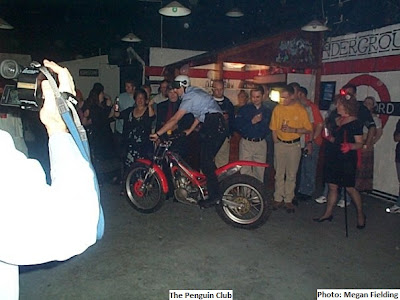 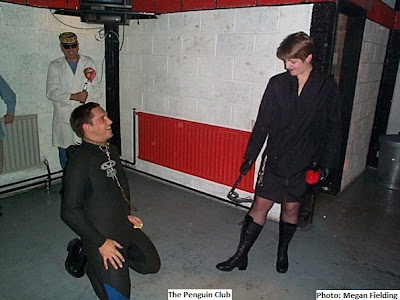 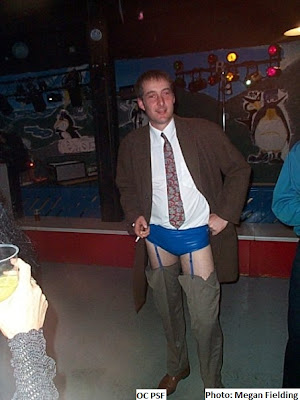 Unfortunately I have to report that, following the closure of the station nearly six years ago, the Penguin club is not looking too good! 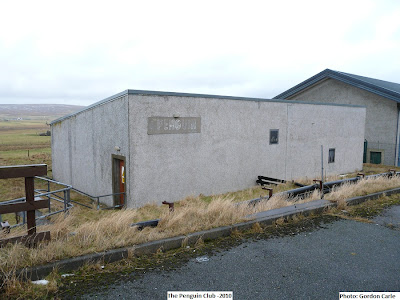 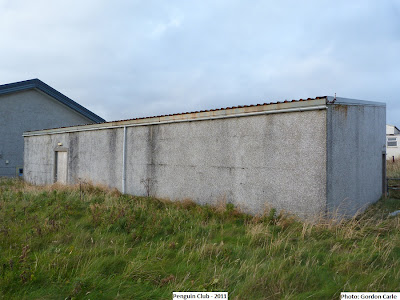 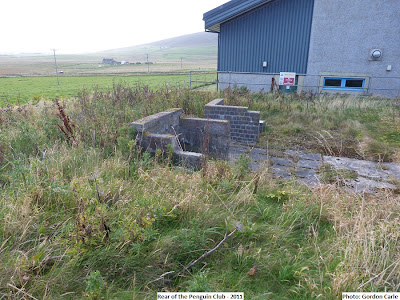