The Earl of Zetland known by personnel from RAF Saxa Vord, was the second ship of that name. She was built by Hall Russell, Aberdeen in 1939 and purchased by the North of Scotland, Orkney and Shetland Shipping Company. Her length was 166ft and her weight 548 tons. She operated for a short while in Shetland waters before being transferred south soon after the outbreak of WWII to operate in the Pentland Firth area. After the end of the war she was transferred back to Shetland.

During the lifetime of the camp there were three Skippers. Captain Jimmy Johnson held the position for 15 years until late 1965 when he moved on in the Company to take command of the MV St Clair. The mate, Willie Sinclair, took Command of the Earl until 1972 when he retired. He, in turn, was followed by the man who had replaced him as mate. Captain Michael Gray who was in command from the summer of 1972 until the sailings ceased. Her last trip from Shetland was in March 1975 when she left for Aberdeen. (Left Click on photos to enlarge). 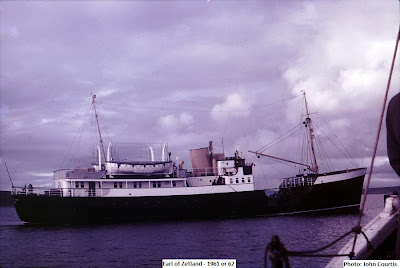 Her normal schedule called for 3 trips a week to Whalsay, Yell and Unst and once a week to Out Skerries and Fetlar (dependent upon weather of course). At some of the ports of call her draught and tide state could be such that she had to anchor off and small craft, known as Flit Boats - manned by local folk, were used to transfer passengers and cargo ashore. Whilst that was her normal schedule it was frequently altered for events like cattle & lamb sales. Sometimes extra trips were laid on to take visitors to places like Fair Isle & Muckle Flugga. In Lerwick the Earl was normally berthed at the Victoria Pier. This was quite handy at times as frequently passengers & cargo from the Earl were transferring to the St Clair and vice versa. It was a familiar sight to see the Earl at one side of the pier and the MV St Clair at the other. The next photo, from the mid 60’s, was taken by a passenger on the St Clair as she was leaving for Aberdeen and shows the Earl berthed at the pier.
﻿ 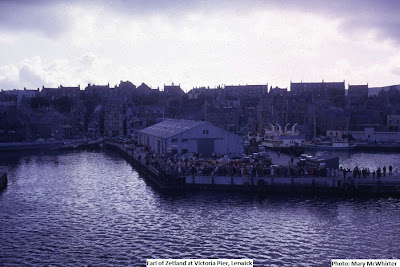 The next two pictures were taken from the Earl as it left Lerwick by the North Mouth early in the 60’s. For someone living in Lerwick today I find it interesting to note how much the north end of Lerwick has changed in 50 years: 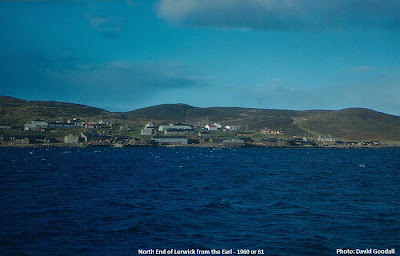 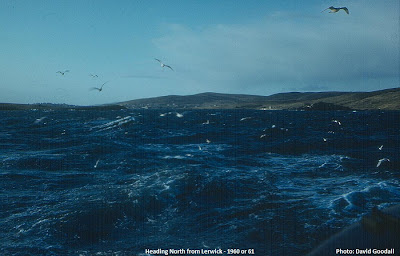 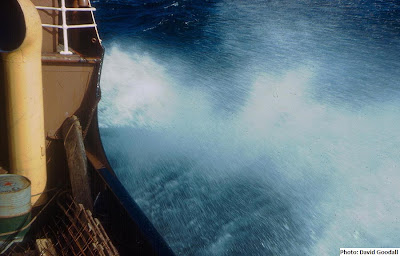 The first port of call was usually Whalsay. The next  picture of Symbister was taken from the Earl in August 1966. 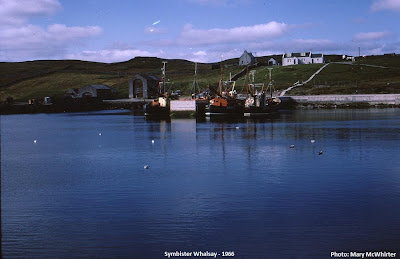 The  photos below were somewhat earlier and were taken by Whalsay in 1960 or 61: 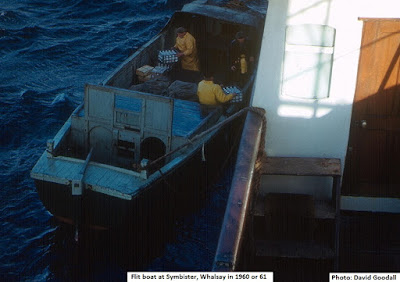 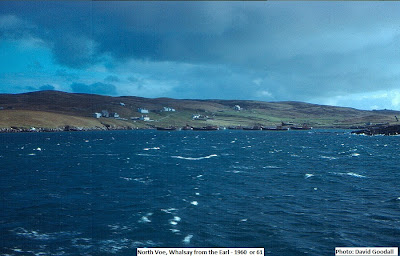 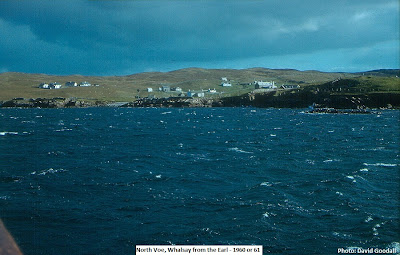 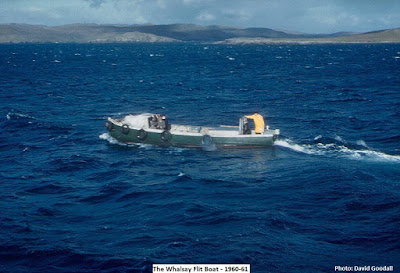 Once a week the next port of call was likely to be Out Skerries. Routes were usually decided by weather, cargo & passengers. I’m afraid I don’t have a photo associated with the Earl & Out Skerries so I have attached a snap taken recently from the Fivla, the inter-island ferry currently serving the Out Skerries. 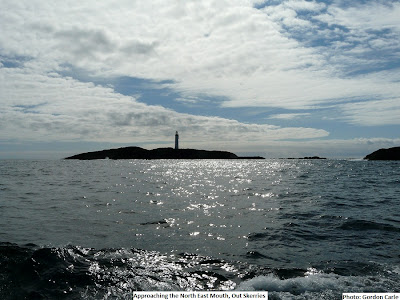 Once a week, after visiting Out Skerries, the Earl would call at Houbie in Fetlar. The next picture was taken from the Earl in 1958 by the first CO of Saxa, Sqn Ldr Gordon Mackie Millar.Fetlar was another place where Flit Boats were needed as there was no deep water berth suitable for the Earl.


Mid Yell, with its sheltered anchorage and the largest population centre on the island, was hardly ever by-passed. The photos below show the Earl berthed at the pier and Flit Boats in action at Mid Yell. 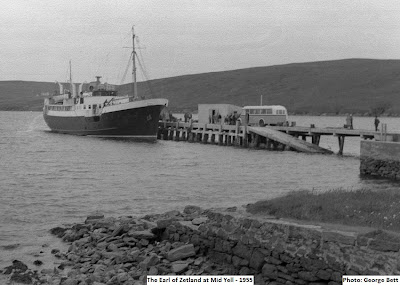 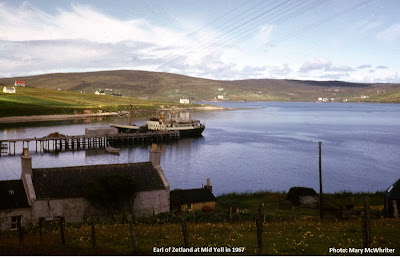 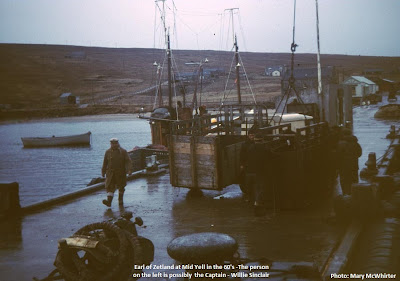 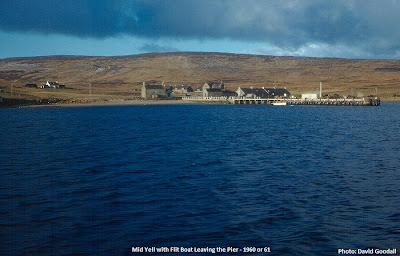 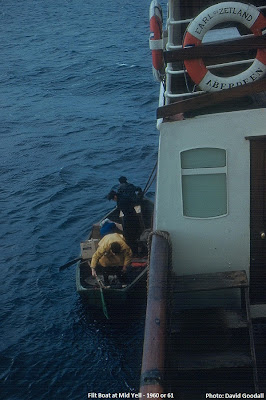 From Mid Yell the Earl would head north-east to Uyeasound at the south end of Unst: 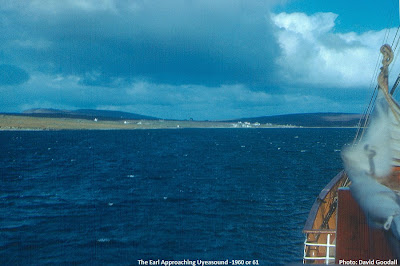 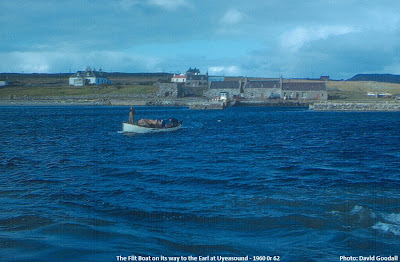 From Uyeasound it would then be up the east coast of Unst to the most northerly destination on the route -Baltasound.  Sometimes, when running late or due to winds or tides, Baltasound would be omitted from the schedule with everything possible for Unst being offloaded at Uyeasound. Unfortunately, whilst Baltasound had a pier that the Earl could use, Flit Boats were the order of the day at Uyeasound. Heavy cargo like vehicles could not be unloaded. Shipments occasionally ended up back in Lerwick. The next sequence of photos were all taken at Baltasound. The St Rognvald appears in three of the pictures and I have added a short note about her at the end of this section. 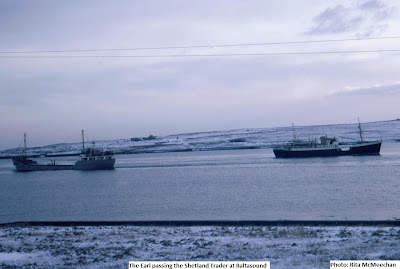 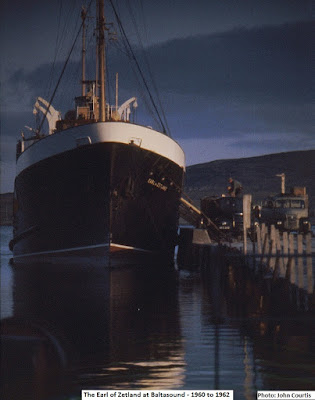 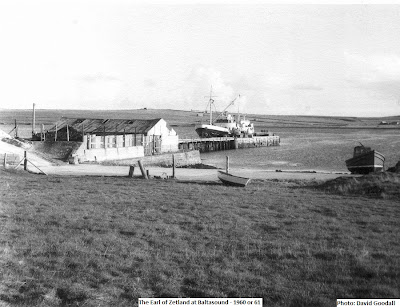 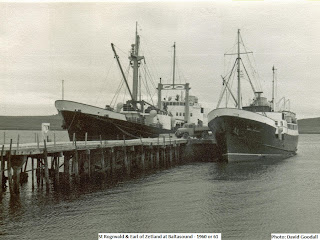 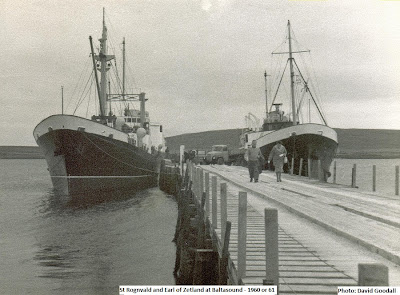 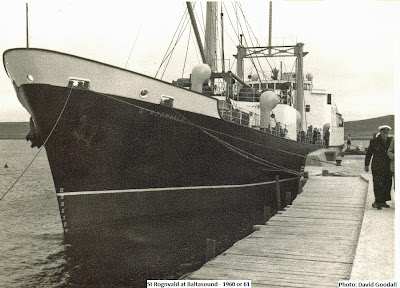 Continuing the sequence at Baltasound, the next four pictures give a fair representation of why the service was operated. I know that beef is supposed to be hung before sale and consumption but the next 3 shots seem to be taking things to the extreme: 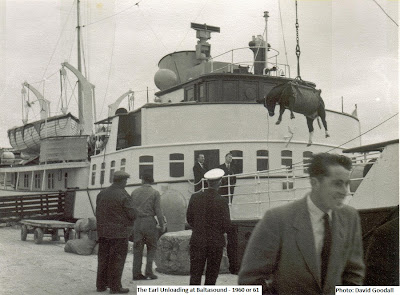 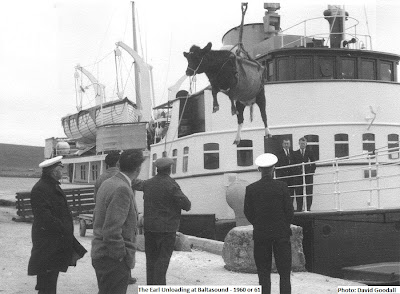 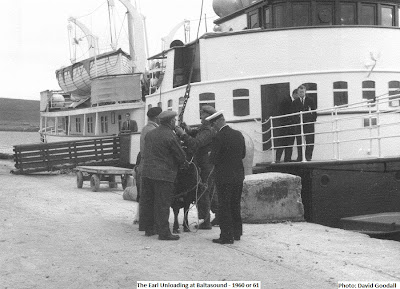 And finally, the human cargo disembarking at Baltasound: 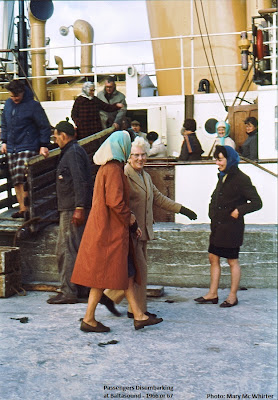 The working lives of the Earl and St Rognvald in the Shetlands came to an end with the advent of the RoRo Ferries in the 70’s. The Earl of Zetland is now a floating pub/restaurant on the River Tyne at North Shields.


Note 1. The St Rognvald III
The St Rognvald III was built by Hall Russell in Aberdeen in 1955 and, like the Earl, it was owned by the North of Scotland, Orkney and Shetland Shipping Company. It was significantly larger than the Earl being 1024 tons and 244ft in length. Its main purpose was to carry cargo but did have accommodation for 12 first class passengers. Because of her size she was very limited in finding places in the Northern Isles where she could berth. In the summer months she also offered cruises to the Northern Isles from Leith (Edinburgh).
Note 2. Earlier Section on the Earl of Zetland
A much shorter section on the Earl was published in 2009 here: http://ahistoryofrafsaxavord.blogspot.com/2009/11/earl-of-zetland.html