ACE High was a NATO communications system which stretched over 8,000 miles from north Norway to eastern Turkey. Its purpose was to provide early warning links and to permit commanders to discuss strategy during the cold war period. Its’ origins were in the mid 50’s and it has now been superseded by other communications links. Over 80 ground stations were involved, half of which used large aerial arrays to propagate high frequency radio signals which were “bounced” over the horizon using tropospheric forward scatter techniques (hence FSS Mossy Hill – Forward Scatter Station). These Units also had microwave aerials which linked into the other sites, using line of sight techniques. The smaller stations were off-shoots from the main line of larger stations. I will leave the experts to explain the system in more detail. There is a good article on the Ace High System on the Subbrit site here:
http://www.subbrit.org.uk/rsg/features/ace_high/index.html
So, back to the subject of this section, Ace High in Shetland. There were four main elements to the system in Shetland, Mossy Hill in the south mainland with its large tropospheric scatter arrays and microwave tower, 2 microwave “off-shoot” sites at Collafirth Hill and Saxa Vord and; fourthly, an admin and accommodation site at Maybury Camp at Virkie in the south mainland. (Left click on pictures to enlarge). 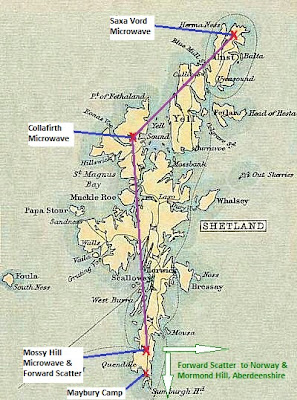 Mossy Hill was hub of the Shetland operations, the large tropospheric scatter arrays being a major landmark for locals and tourists over a long period. Mossy Hill was the element which allowed communication to and from the rest of Europe. The large aerials were pointed at a similar site in Norway and a large site at Mormond Hill, a few miles south of Fraserburgh in Aberdeenshire. At one stage it was planned for Mossy Hill to link with the Faroe Islands as well but this part of the system was never developed. At a later stage 2 extra reflectors were built (bottom, left in the second photo). These were outside the FSS Mossy Hill perimeter fence and belonged to BT - part of a Tropospheric Scatter link with the North Sea Oil Rigs. 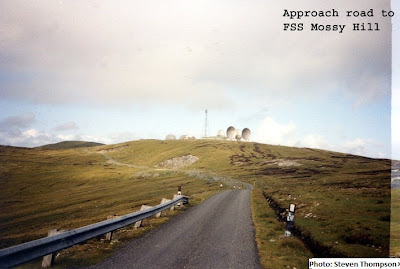 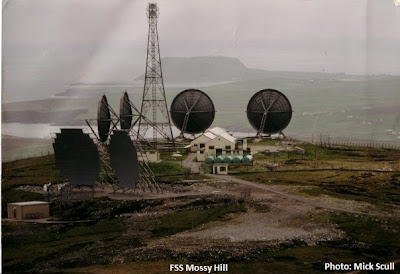 The site at Collafirth Hill was about 760 feet above sea level and functioned as a relay station between the “hub” at Mossy Hill and the main user at RAF Saxa Vord. On a good day there were beautiful views of Shetland but it was a long way from what most people would class as civilisation. 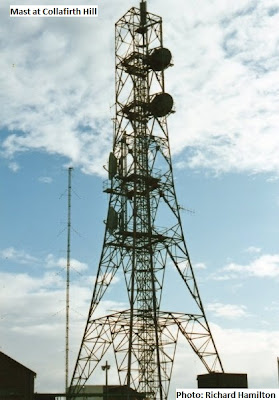 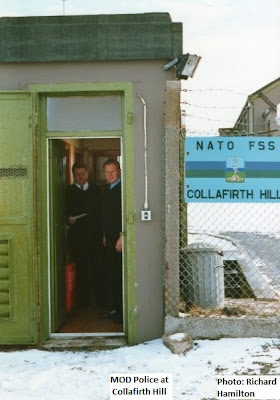 The site at Saxa Vord was alongside the RAF operations buildings and, being some distance below the summit of the hill, was at about the same altitude as Collafirth. The ACE High personnel worked independently from the rest of the site but at least there were other people were around. The RAF Domestic site and its facilities helped counteract the comparative isolation. 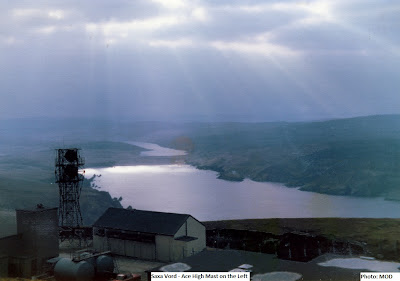 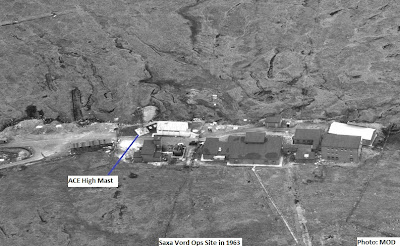 The Mossy Hill, Collafirth Hill and Saxa Ace High equipment was installed in the early 60’s and the mast at Saxa can be seen in the last (aerial) photo, which was taken in the summer of 1963. For the first few years the system was operated by RAF personnel but in 1968 duties were transferred to the Royal Corps of Signals. Army staff were then responsible for operating the equipment right up until the end – FSS Mossy Hill was closed down in 1990.
Maybury Camp at Virkie provided support for the Servicemen and was the centre of much of the entertainment and leisure activities for those posted to Shetland. 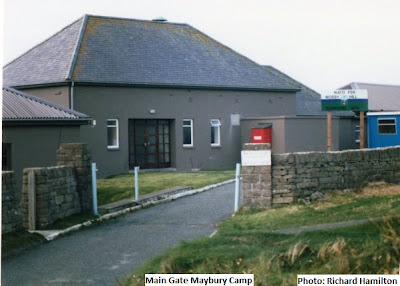 The social club we very popular with the servicemen, their families and with local civilians who were permitted to use it, Cecil Duncan has kindly given me permission to reproduce this copy of the clubs plaque, which originally came from Steven Thompson: 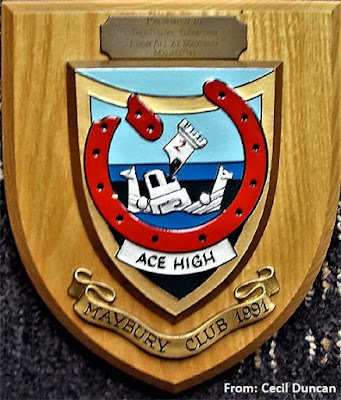 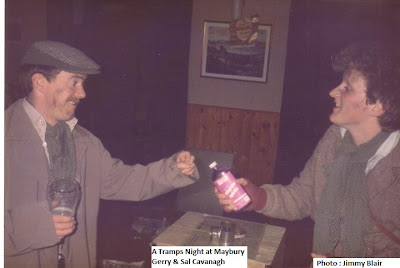 On a few occasions, few because of the logistics and distances involved, there would be trips to and, sometimes functions at, RAF Saxa Vord. 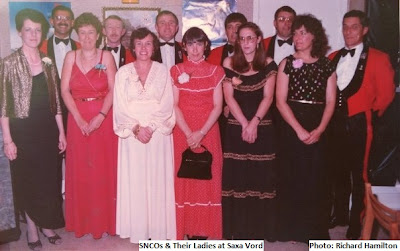 Like all military organisations the ACE High network was subjected to its share of visiting dignitaries. As most servicemen will tell you the visitors are usually pleasant and considerate – it’s the numerous staff officers and hangers on who cause the problems. Two VIPs who visited ACE High Units in Shetland were HRH Princess Anne and General Shalupa of the German Army, who was CinC AFCENT at the time of his visit. 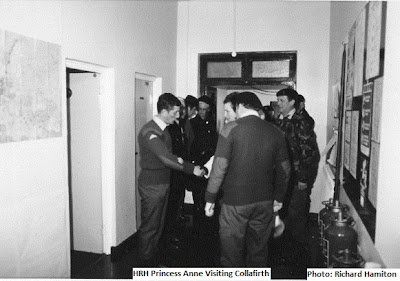 The next picture has come from John Stoney, who is the Royal Signals Sergeant near the centre of the photo. The photograph was taken  by Douglas Young, Official Photographer to Princess Anne's visit to NATO FSS, Collafirth Hill. 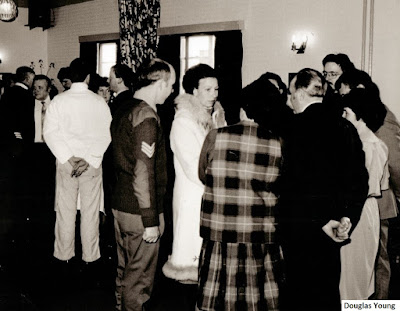 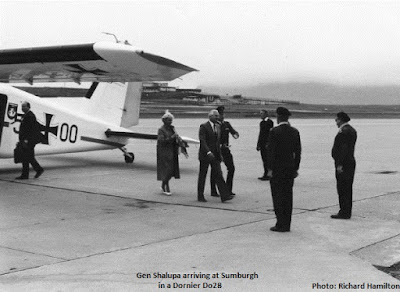 ﻿
﻿
With advancing technology all equipment eventually becomes obsolete and so it was with the ACE High system. FSS Mossy Hill was closed down in 1990 at a ceremony attended by staff officers from both the Army and the RAF. 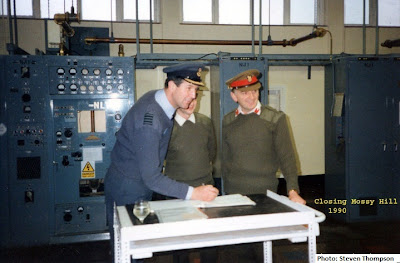 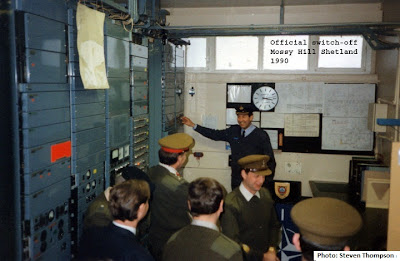 I’m grateful to Jimmy Blair for the final picture showing the unit personnel at the closure. 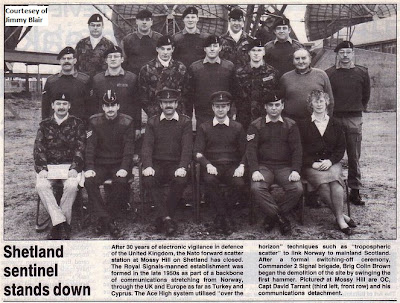 I would like to acknowledge the assistance I’ve received from the following people in writing this section (however; the mistakes are my own!) - Jimmy Blair, David Edwards, Richard Hamilton (unfortunately died in 2015), Bob Jenner, Mick Sculls, John Stoney, Cecil Duncan & Steven Thompson.
CONTENTS LIST