St Clair – The Trip from Lerwick to Aberdeen

For a period of 47 years, between 1955 and 2002, one of 4 vessels named the St Clair was carrying servicemen between Aberdeen and Lerwick. I believe the first servicemen employed on constructing Saxa arrived on Unst in 1955 and the last operational trip of the MV St Clair on the route was in 2002. As time progressed more and more families were carried and from 1977, with the advent of the first RoRo vessel, the number of servicemen taking their cars to Unst increased dramatically.

A short digression on the St Ninian (2). This vessel similar in size to the St Clair operated from Leith to Aberdeen and then on to Shetland on different days from the St Clair. She travelled this route from 1950 to 1971. I never travelled on her & so have little information but I know she was used by many servicemen. The photo below of the St Ninian was taken by Geoge Bett around 1960: 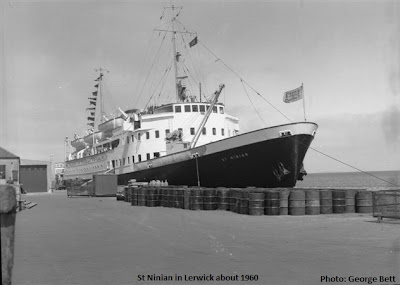 Just for interest – the Second Class return fare (with berth) between Aberdeen & Lerwick in 1961 was 110/- . That’s £5.50 as it would be written today; in context it was probably an average week’s wage for many people. The following photos were all taken between Lerwick and Aberdeen and the views would have been the same whether you were travelling either on the St Clair or the St Ninian. The pictures were taken by various people over a 40 yr period and, I have to admit, could have been taken from vessels travelling northwards. However, the sequence of views is from north to south.

Departure. Until the 90’s the south boat left from Victoria Pier right near the centre of the town. The terminal was later moved about 1km north-west to Holmsgarth where new facilities were built to handle larger vessels. 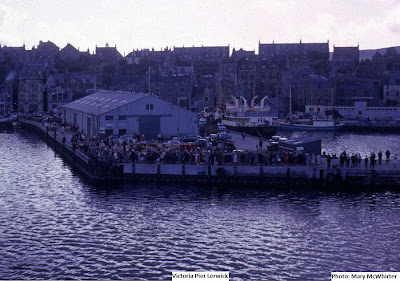 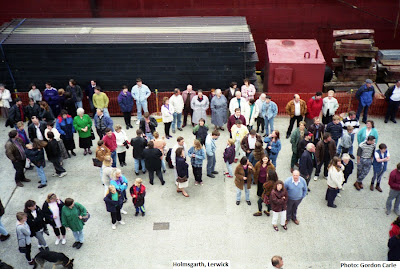 A few pictures of Lerwick: 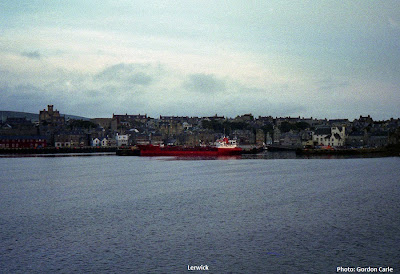 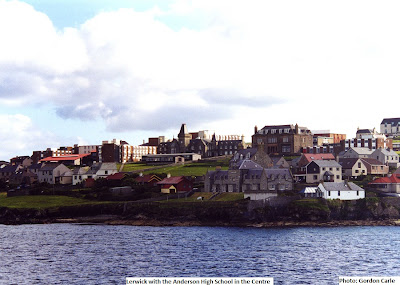 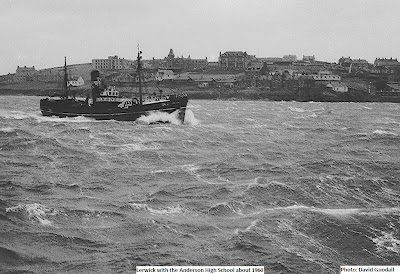 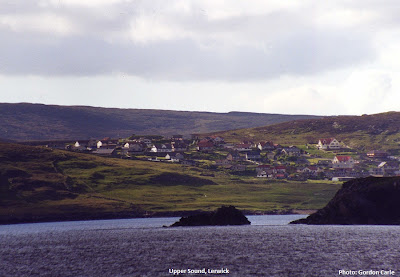 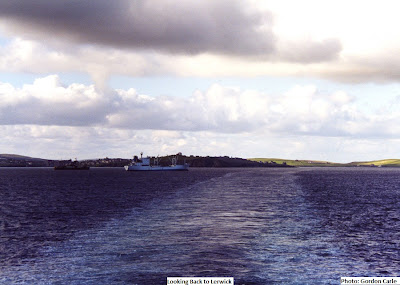 A couple of photos featuring Bressay and Klondykers: 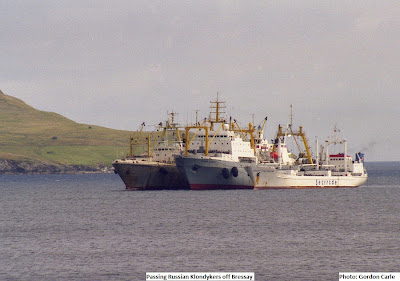 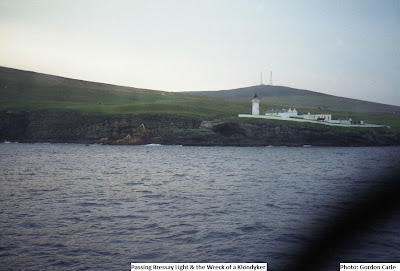 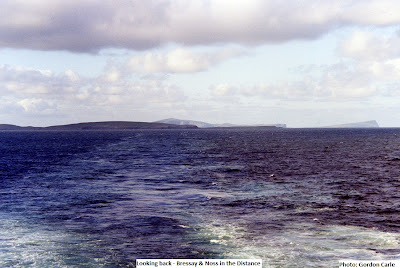 A view of the point of Trebister Ness and, in the background, Quarff.  Although it couldn’t be seen from the Clair another Klondyker, the 10,000 ton Pionersk, was wrecked at Trebister Ness in 1994 – some of the remains are still visible: 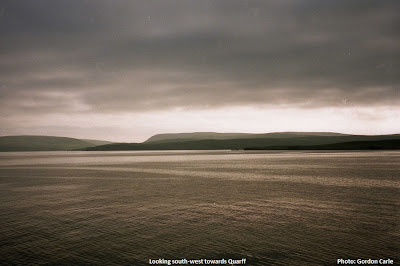 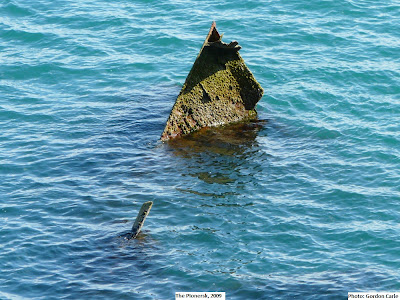 On most occasions the vessel would then pass to the east of Mousa but on fine summer evenings the skipper might take you through Mousa Sound, between the Island of Mousa and the Shetland Mainland. The island is famous for its well preserved Broch – believed to be more than 2,000 years old: 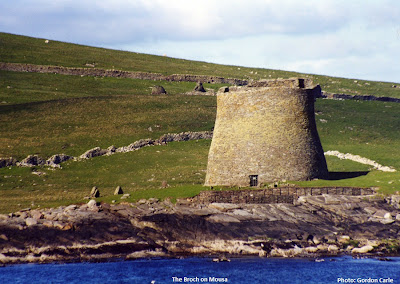 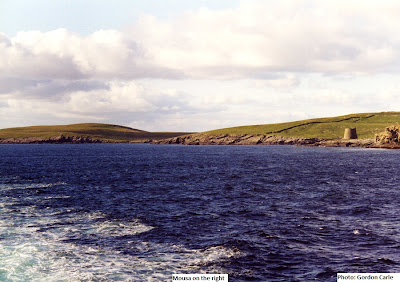 The next picture is of the Ward of Scousburgh on the left, with an array of BT communications aerials. On the right is the Mossy Hill where there used to be a NATO Forward Scatter Site but by the time this picture was taken it had been dismantled. The 2 dishes remaining belonged to BT but they too have since been dismantled: 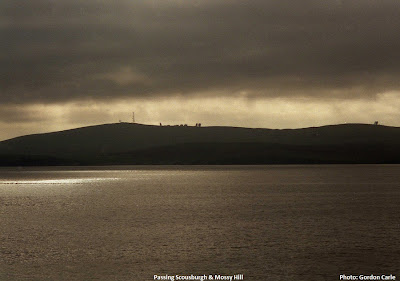 Compass head is the next significant landmark. Behind it lies Sumburgh Airport and on the top an array of radio aerials, mainly belonging to the Civil Aviation Authority. During WWII Compass Head was the site of a Chain Home Low radar site – some of the buildings remain. The second photo, kindly identified by Bob Jenner, shows one of these buildings which is still in use: 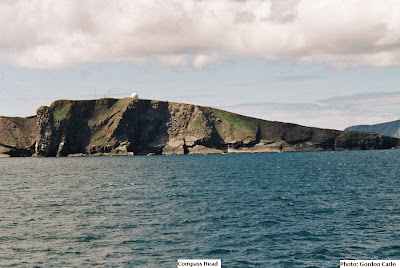 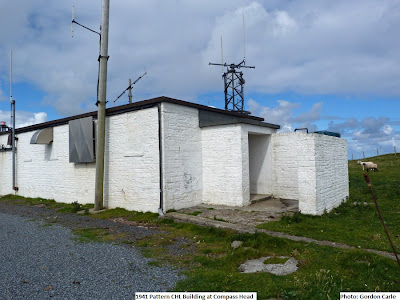 A short distance further south lies Sumburgh Head with its landmark Lighthouse and a puffin colony. Sumburgh Head also had a WWII radar site – a Royal Navy Coastal Defence U-boat site (the second photo shows one of the old buildings): 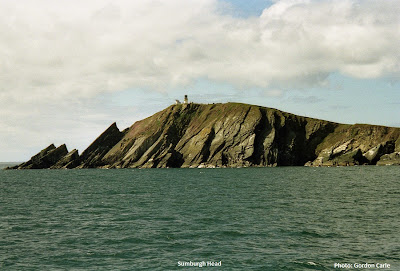 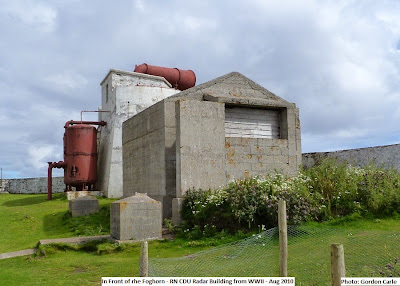 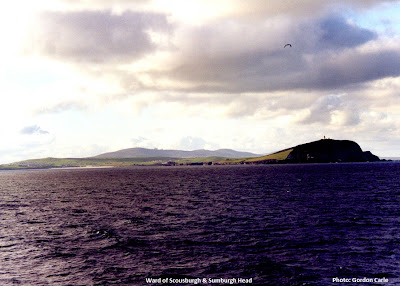 On the lighter summer nights passengers would get good views of Fair Isle: 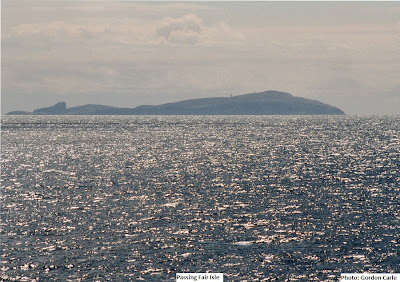 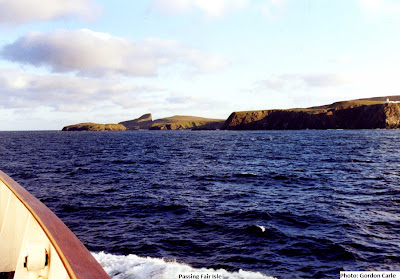 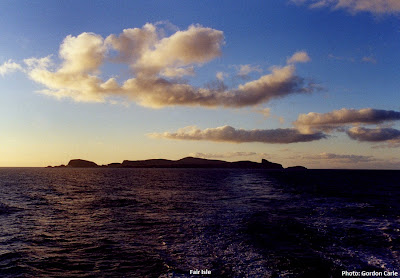 Also in fine weather and for the early-risers, good views of the north-east corner of mainland Scotland could be had. The next 3 photos were taken passing Boddam, location of the RAF Buchan Domestic site. The Ops site can just be seen in the first photo (centre, left): 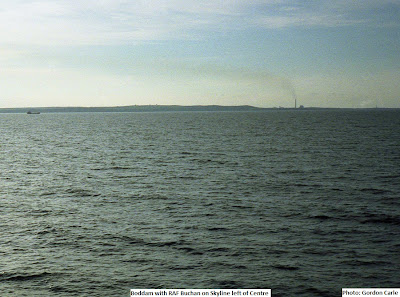 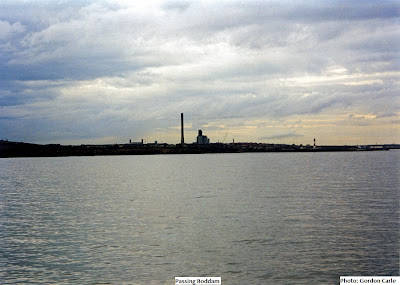 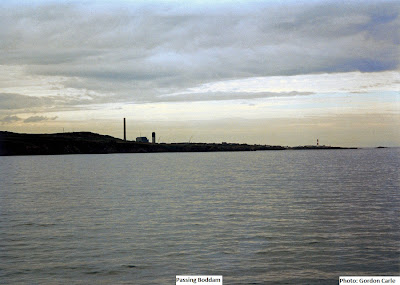 An hour or so later you would be arriving in Aberdeen: 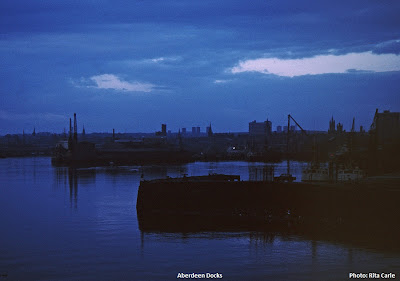 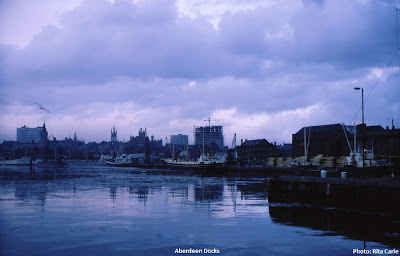 If you had been travelling before 1977 and had a car on board, you might have had to wait for a considerable time to be reunited! 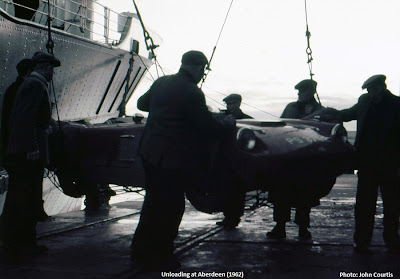 In summary; in good weather and the right company - a memorable trip, in bad weather with young children – an experience to be forgotten.