In this section I intend to give brief details of the radars which were used on site during the lifetime of RAF Saxa Vord. As an ex Fighter Controller I had experience of working with some of the radars mentioned but I am not a radar expert so the information contained here will be insufficient to please the purist and, if any of the information is wrong, I would be happy to make corrections. I have stuck to the frequency band classifications I was taught. I would appreciate hearing from anyone who has better photos I can use or has significant information to add.

During the lifetime of the unit the radars experienced a number of significant “events” due to the local weather. I intend to write separate sections on this aspect of operations at a later date.

When the station became operational in 1957 it was equipped with a Type 80 Search Radar, a Type 14 as a standby Search Radar and a Type 13 Height finding Radar.

Type 80 - search radar. As a controller I worked with Type 80 radars at Bawdsey, Boulmer, Buchan and Saxa and had seen them in operations in other places, including Madalena in Malta. In reasonable weather conditions and a non-ECM environment I have never used a better radar for controlling aircraft. The 80 was an “S” Band (10cm wavelength) radar with a very large parabolic section aerial (75 x 25 ft in old money). The Type 80 had been designed to work in wind speeds of up to 80 knots and if the wind exceeded this speed the aerial assembly was allowed to weathercock.

This aerial system was twice detached from the turntable by high winds. The first time this happened was in late 1956 or early 1957, before the top site was completed and the Unit still not operational. If anyone had data or pictures of this even I would love to hear from them. It happened again for a second time in Jan 1961. The Type 80 was eventually enclosed in a radome in 1963. The Type 80 was retired in the 70’s when it was dismantled and replaced by the S649 (in the period 1976-79). (Left click on pictures to enlarge). 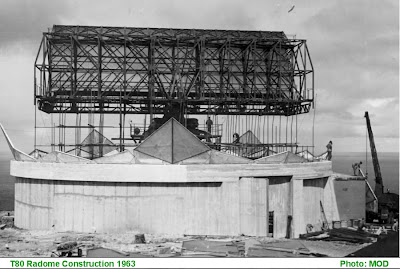 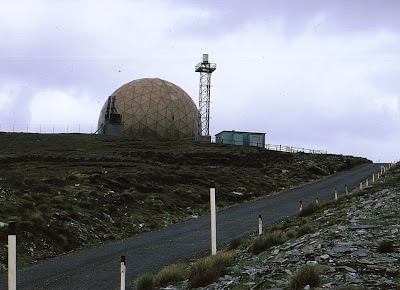 Type 14 – search radar. I don’t remember working with a Type 14 but I know that the RAF had a number of these radars. I have indistinct memories of a lesson at the School of Fighter Control (at RAF Bawdsey in my time – No 29 FC Course) when we were taught about Type 14 convoys. These convoys had a Type 14, a Type 13 Height finder, an operator’s cabin and engineering equipment – a sort of predecessor of the 1 ACC concept. Like the Type 80 it was an “S” Band (10cm) radar. The Type 14 at Saxa was never enclosed in a radome and one of its major limitations was its inability to operate in high wind speeds. The Type 14 was finally switched off in Sep 1964. 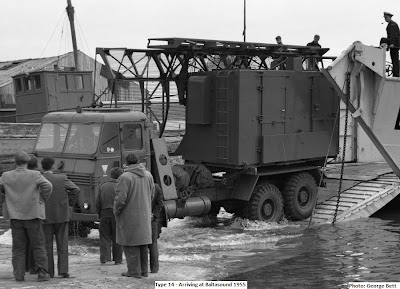 I believe that the Type 14 was mounted on a gantry which was located due west of the Type 80 but has long since been dismantled. I'm grateful to Lez Fishman (Saxa 1963/4) for allowing me to use one of the few Saxa Type 14 photos available; 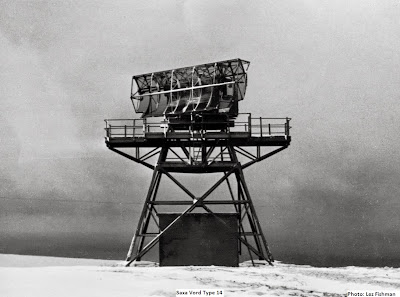 AN/UPS1 Search Radar. I recently found out that there had been another search radar at Saxa which I had not known about. After Sep 1964, when the Type 14 radar was shut down for the last time, Saxa was left without an on-site standby search radar. Thereafter an S259 was deployed to the site to cover long scheduled maintenance periods. Whilst this may have been good training for those in the mobile radar world it did not make economic sense. In Jun 73 an AN/UPS1 was delivered to the Unit as a standby radar to provide cover for the Type 80. The AN/UPS1 was the American predecessor of the S259 and hardly state of the art technology.

The following extract is from www.radarpages.co.uk - an excellent site for those interested in UK military radars. The extract is taken from a joint warfare document called JSP6 (JSP = Joint Services Publication) – in my days it was classified “Confidential” and I remember having to study it for promotion exams. 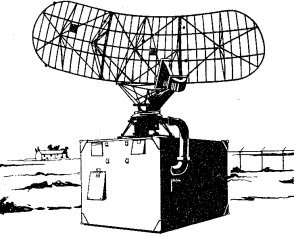 (sketch from JSP 6 via Richard Vernon)

Editors note: I am indebted to Richard Vernon for providing the sketches and the technical details of British operated versions of the UPS-1 tactical radar.


xxxxxxxxxxxxxxxxxxxxxxxxxxxxxxxxxx
My memory recalls it being described as a US Marine Corps beach-head radar. Its time at Saxa can not be described as glorious. It was used in Sep 73 to cover a scheduled Type 80 maintenance period but its use was suspended in Oct when water was found on the cabin floor. It was taken inside the Type 80 Radome and dried out – the roof was resealed to stop the leak and it was put outside in late Nov. However, the cabin roof started to lift in Dec and eventually it was returned to the Type 80 Radome. Spare parts were ordered and it was off the air until 10 Jul 74. Almost as soon as it became operational it went unserviceable. It remained U/S until Nov when it was returned to the Type 80 Radome for storage. A lot of messages were exchanged with higher authorities but it was decided to concede defeat - the radar was prepared for transport and finally shipped out to Wattisham on 8 Jul 1975. The UPS1 had been on site for two years but its operational use was limited to a few days!
I have been unable to locate a picture of the UPS1 at Saxa but I am grateful to Martin Jones for allowing me to use one of his photos - a UPS1 at Muharraq in 1971 - you can see where the S259 got its' looks from! 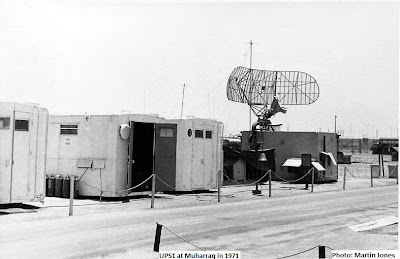 I am also grateful to Laurence Bean who has allowed me to reproduce two of his UPS1 photos. 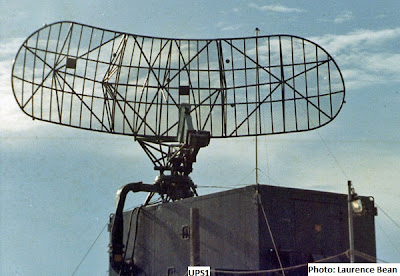 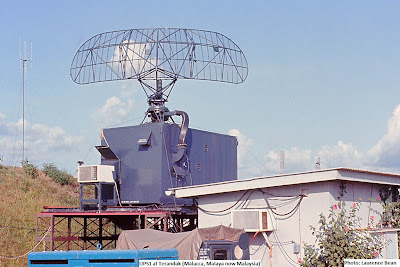 I had always thought (and been told) that there was no difference between the UPS1 and the S259 externally - the only differences were with the electronics inside. However, I would like to thank Bob Jenner for pointing out that the waveguides are actually different, as can be seen in the photos below: 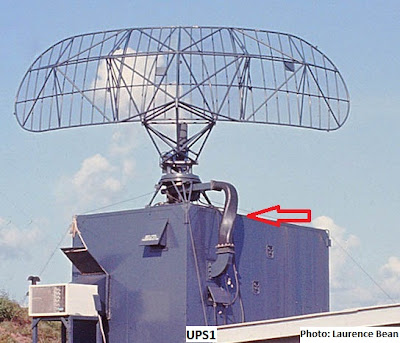 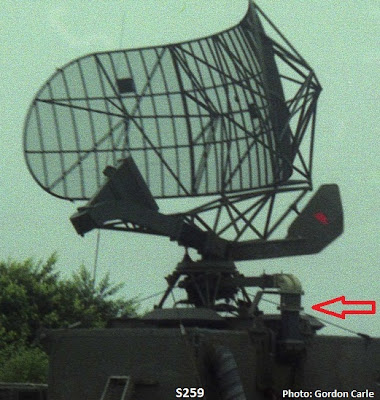 I would be pleased to hear from anyone who has a picture of the UPS1 at Saxa Vord which I can use on this blog: gordon.carleATgmail.com (replace the AT with the usual symbol).

S259 - search radar. The S259 was a British (Marconi) update of the American AN/UPS1 radar (It was also known as the Type 95). It was air transportable and for many years it formed the centrepiece to the RAF's Tactical radar deployment system (1 ACC). I’m not sure how many of these radars the RAF had but I found it surprisingly effective when it was deployed to Ascension during the Falklands conflict. An S259 was deployed to Saxa quite frequently when it was used as a back-up during` maintenance periods for the Type 80. The cost of deployment and recovery lead to 1ACC relinquishing control of an S259 and it was passed to Saxas inventory in Feb 1975, along with some staff! This transfer probably took place because of the lack of success of the AN/UPS1. The S259 was used extensively during the period 1976 to 79 whilst the Type 80 was demolished and the HF200 and S649 radars were installed. This radar operated in the “L” Band (wavelength around 23cm). 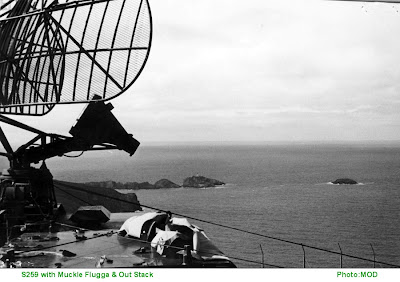 The S259 was retained as a standby and was later housed in its own radome on part of the base of the Type 80. You can get an indication as to the relative sizes of the 2 radars in the picture below. 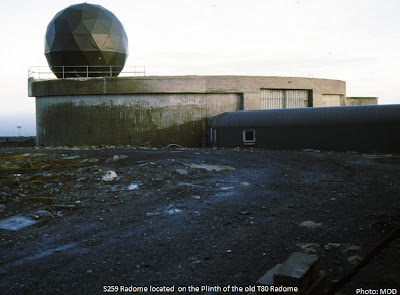 Type 13 – height finder. My memories of the Type 13 are very favourable. In the hands of a skilled operator it was pretty accurate and I like to think that the guys I worked with were very skilled. My views are obviously coloured by the fact that when on duty at Saxa Vord I was the only controller and had my own dedicated height finder. On most other units the controllers could ask for heights but had to wait in a queue for an occasional update from an FPS6 or HF200. Its range was not as good as the Type 80 but you always knew that if you were seeing a response on the Type 80 beyond the range of the T13 then the target was at a reasonably high altitude. During its 20 year operational life at Saxa it was frequently damaged by the weather which meant that many parts of the equipment had to be repaired or replaced (including a complete cabin replacement in 1970). The Type 13 was also an “S” Band (10cm wavelength) radar. 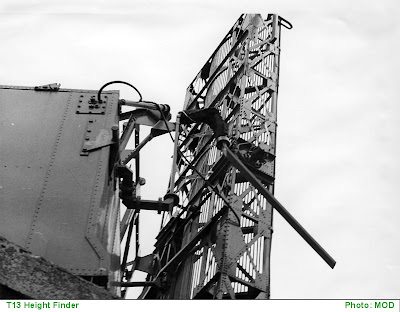 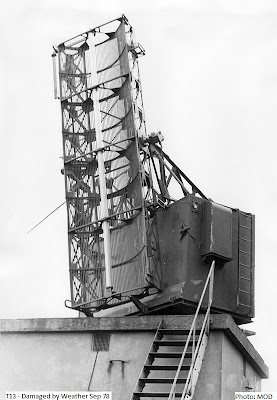 HF 200 - height finder. In 1978/9 a more modern height finder, the Plessey HF200 was installed. From the start this radar was planned to be in a radome. It was more accurate than the Type 13 and had a far greater range. I have been told, however, that it was prone to oil leaks. The HF200 was another radar working in the “S” Band (10cm wavelength).) 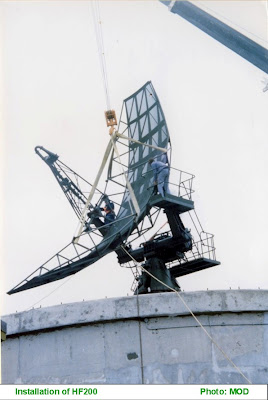 S649 - search radar. At the same time that the HF200 was being installed work was also in progress on a new search radar. This was the Marconi S649, also known as the Type 96. This had two large, back to back aerials housed in a radome. I presume this radar used two frequency bands like some earlier Marconi types (S316/S318 for the RAF site at Bukit Gombak in Singapore for example) in which case it is likely that it operated in L and S Bands. Like the HF200 it was originally installed in a radome. However, the storm at New year 91/92 destroyed the radome and damaged the S649. The Radar was repaired but the radome was not replaced. This “exposure to the elements” is blamed for need to replace it with the Type 93 (see newspaper clipping below) 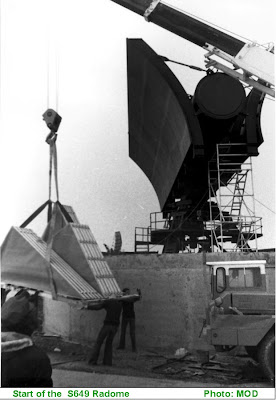 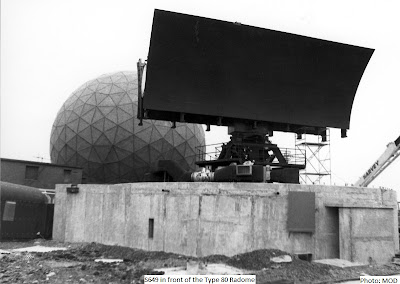 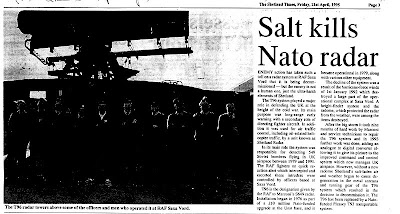 T93 – 3D radar. The Type 93 was a long range, mobile radar which encompassed both search and height-finding capabilities in a single radar. It was built by Plessey. One was located, in a purpose built radome, at Saxa Vord in the mid 90’s and was there until 2005, a few months before the Station closed. I believe that this radar also operated in the “S” Band (10cm wavelength). 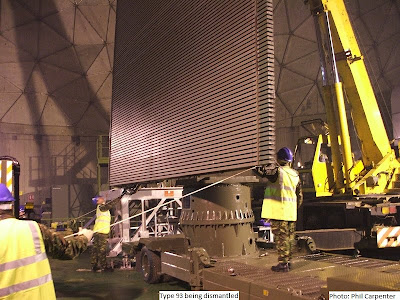 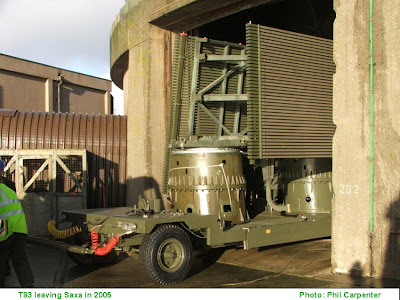 Posted by Gordon Carle at 19:38 No comments: