In the early days of the camp there were far more shops on Unst than in the later years. In the 50’s and early 60’s very few residents had cars – the Dr, Minister, District Nurse and one or two of the more wealthy people had vehicles– for the rest it was necessary to have a place to buy essentials within reasonable walking distance. Some of the early “shops” were just parts of crofts or houses set aside for trading and with limited opening hours.
The advent of more income (the RAF as the main employer) and the RoRo ferries in the early 70’s made it possible to make a return trip to Lerwick in a day and to stock up – especially with fridges and freezers running on power supplied by the camp. For a time the RAF ran periodic shopping trips to the mainland for the benefit of service personnel and their families. Today there is a scheduled civilian service from Unst to Lerwick, which runs 6 days a week and allows 4 hours shopping time in the town. It’s no wonder that many of the local Unst Shops found it difficult to compete after 1970 and a that number have closed down.

1. The Final Checkout (P&T Coaches ex Mills Garage) on a site near where Hagdale Lodge once stood.
2. Skibhoul at Baltasound.
3. Ethel’s Shop at Baltasound (used to be Harry Henderson’s).

This section will contain pictures of those shops which were open at some time during the life of the Unit. They will start with The NAAFI and then those closest to the camp. (Left click on pictures to enlarge)

The NAAFI Shop for about 40 years 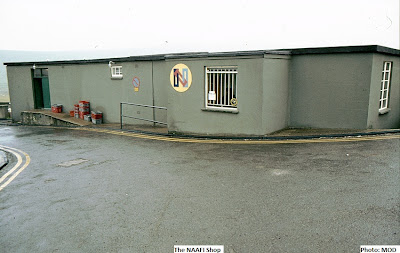 Rear of the NAAFI Shop (Kegs look like empties!)

Following reduction in Unit Strength and NAAFI going into partnership with SPAR – the New Premises: 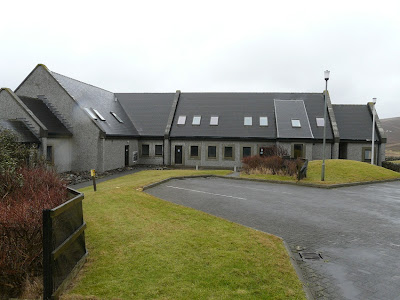 NAAFI Staff in 2001 from the Saxa Voice 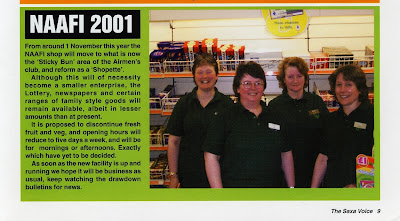 Haroldswick﻿ Area
Mouat's Shop was the closest shop to the unit (near where Nordabrake was built). After it closed it became the Unst Heritage Centre until that moved to the Haroldswick School. 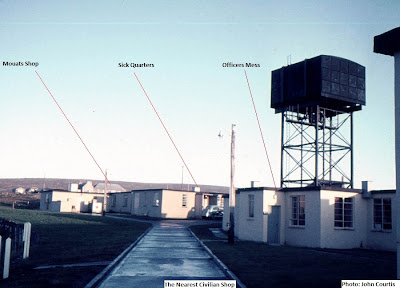 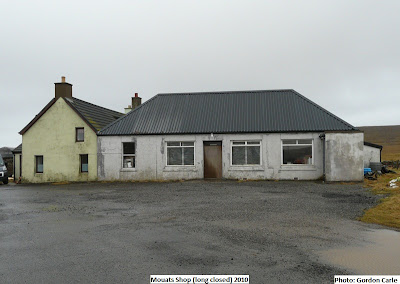 The Haroldswick Shop had the nearest petrol pump to the station 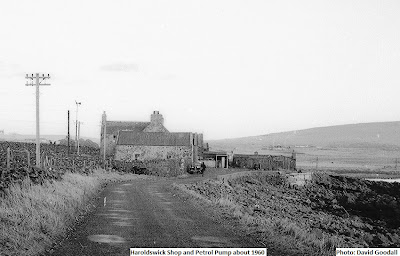 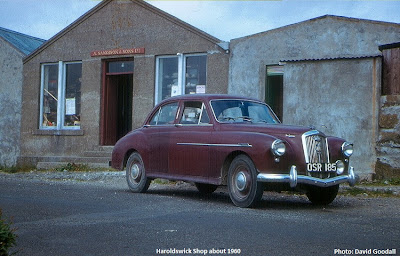 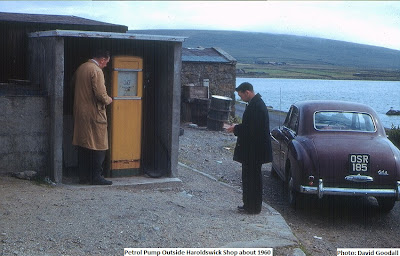 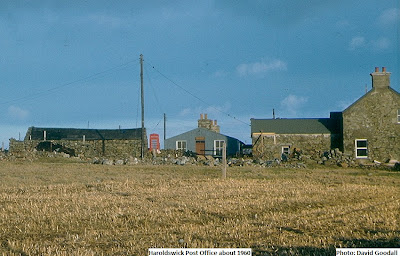 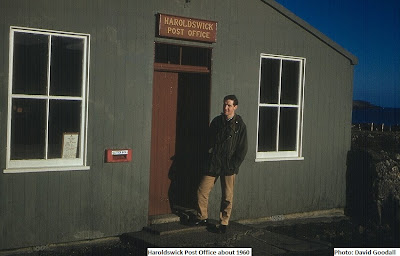 Alex Priest's Shop was located on the road between Haroldswick and Burrafirth, near the turn off to Quoys. 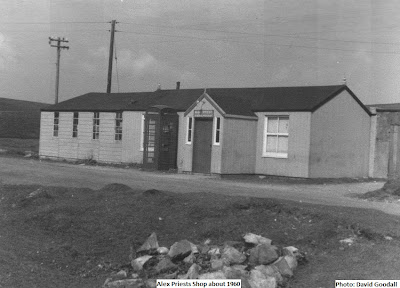 Baltasound Area
The Final Checkout is located with P&T Coaches (used to be Mills Garage) near what was the site of Hagdale Lodge. The first of the two pictures below was taken from the Heogs. 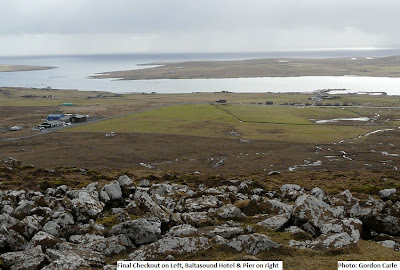 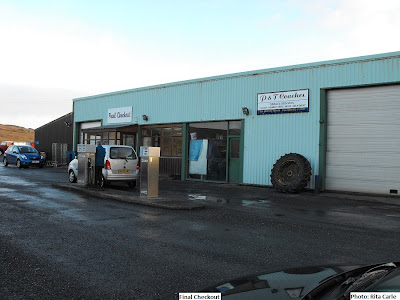 The Baltasound Post Office is sited next to Skibhoul, about 600m from SHE. 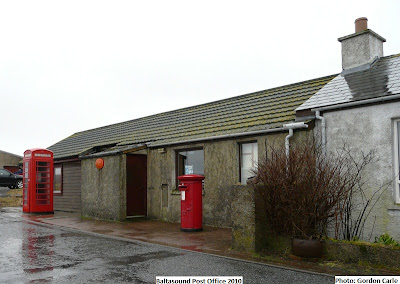 Skibhoul has been on the same site since 1885. The name is derived from a Dutch word meaning “a place to haul up boats”. Skibhoul has its’ own bakery. 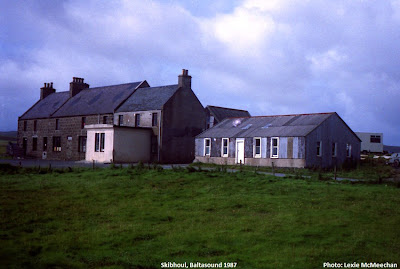 Ethel’s Shop at Baltasound used to be run by Ethel’s father, Harry Henderson. Harry's Park, the field just south of the shop, used to be the Baltasound football pitch. 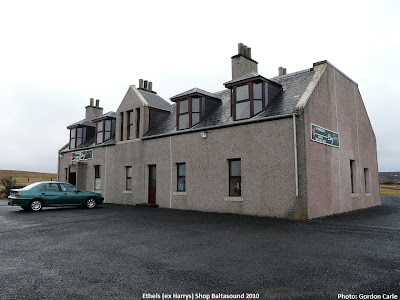 Uyeasound. Although there was little shopping done in Uyeasound in the later period of the RAF stay on Unst, significant numbers lived in the area in hirings in the early years, especially before SHE was built.


The Post Office at Uyeasound was by the Wester Loch (Scata Water) and has long since closed. 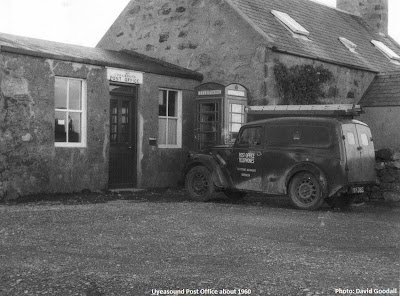 The Westside shop by the Uyeasound pier also closed a long time ago, it was owned by the Sandison's & then by Donald Ritch. 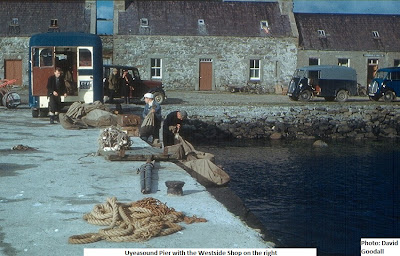 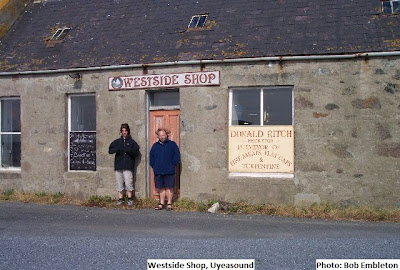 On the other side of Uyeasound, near the school, was the Eastside (Harold’s) Shop. I think that the first of these pictures shows the shop soon after closure, whilst the second shows it just before it was demolished a couple of years ago, to help make way for a new pier. 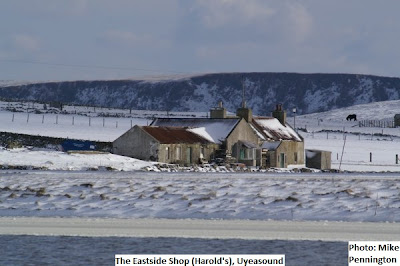 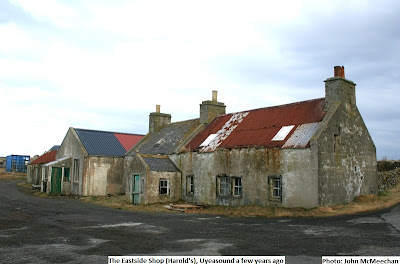 Outside Unst
For those travelling to and from Unst there was always the shop at Ulsta, Yell: 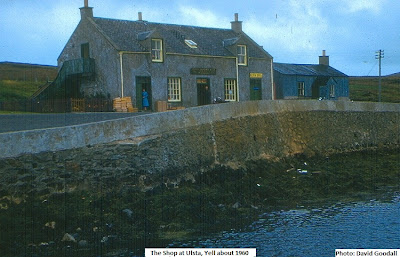 And finally, for some – the height of shopping pleasure  - “The Street” in Lerwick (for some of the single servicemen in the early years it was the chance to visit a few bars!) . Those arriving on the St Clair or the Earl of Zetland and disembarking at the Victoria Pier normally entered via the Market Cross. 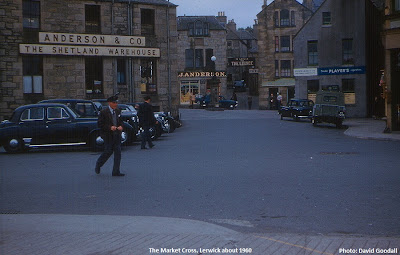