The significance of Helicopter operations in Shetland cannot be under estimated, particularly in the last 30 or 40 years. The economic significance of flights in support of North Sea oil companies has brought major benefits, particularly at Baltasound, Sumburgh and, more lately , in the Scatsta area. Search and rescue operations by helicopters based at Sumburgh have saved many lives and brought assistance to the public in numerous ways. Since the air ambulance contract with Loganair was not renewed, helicopters have also carried out that role within the Islands. However, whilst I intend writing about helicopters in Shetland I will be concentrating on the early days and on Unst in particular.

The first helicopter flight in Shetland was neither military nor a commercial passenger flight. It was a short visit by a Westland S51 Mk1A (Dragonfly) with the unfortunate registration of G-ANAL. The registration was subsequently changed – for obvious reasons. If you wanted to buy your own Westland Dragonfly at this time you would have needed around £28,000. The visit took place in 1954 and was sponsored by the Scottish Sunday Express – they were anxious to show the capabilities of helicopters in the Scottish Highlands & Islands. It was a short visit, restricted by the weather. Landings took place on Fair Isle and at Sumburgh – a planned visit to Lerwick was cancelled due to a poor forecast and a tight schedule preventing delays. The clipping copies below comes from the Shetland Times Edition dated 3 Sep 54. 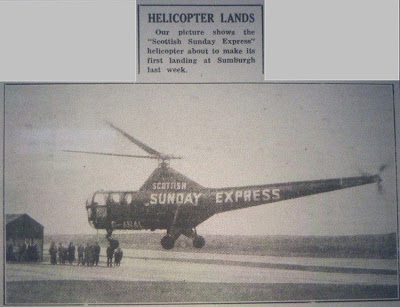 I recently received this comment "I thought you might like to know that the first helicopter landing in Shetland was on 23rd August 1954. I know because my Uncle, Greville "Bim"! Jacques was the pilot on that day. As you mentioned he flew G-ANAL all over Scotland during that summer. On that day alone he flew from Mey to Wick, Wick to Grimsetter, Grimsetter to Fair Isle, Fair Isle to Sumburgh, and then back to Grimsetter. He marked it down in his flight log that he was the first helicopter to land in Fair Isle and Shetland. He went onto Pilot flights in the Antarctic too, for FIDASE."
﻿
﻿
The next significant “helicopter event” in Shetland that I have information about took place in 1960. The Unit records show that a number of VIPs arrived on Unst in 1960 to discuss the forthcoming visit of the Queen. An extract of the Unit F540 is reproduced below:

A photo of it near the Baltasound pier was taken by Rita McMeechan – the Heogs can be seen in the background, with Keldabrun to the right. 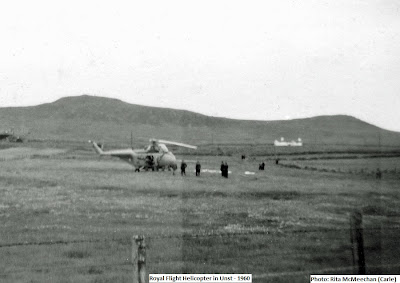 The aircraft involved was probably a Westland Whirlwind HCC 8, two of which were built for the Queen’s Flight and operated by the Flight 1959-64. On the same day the Whirlwind also landed in Lerwick; a copy of a clipping from the Shetland News of the 16 Jun 60 follows: 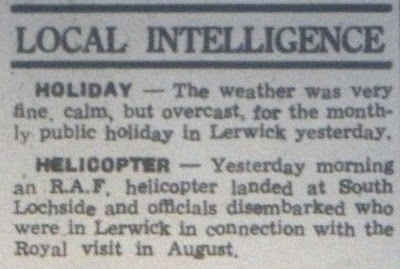 The Lerwick Branch of RAFA has always “punched above its weight”, frequently collecting record amounts of money (per capita) on Wings Day Appeals compared to other branches. In the 50’s and 60’s there were large scale events planned and well supported by the RAF. On one occasion a Flight from 111 Sqn was booked for a flypast – the Sqn, then flying Hunters, was known as the Black Arrows and were predecessors of the Red Arrows. In 1958 at Farnborough they were the first (and still the only) aerobatic team to loop 22 aircraft in formation. In 1963 the Branch organised an early winching display in support of their wings appeal. The Whirlwind helicopter was escorted to Shetland by a Percival Pembroke. An article about the event from the Shetland Times dated 6 Sep 63 is reproduced below:

A clipping from the Shetland Time dated 20 Sep 63 reports on the occasion: 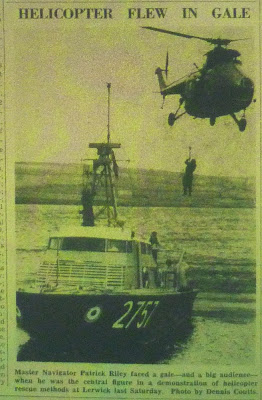 In 1965 the first Royal Navy Helicopter (that I have a record of) visited Shetland. The clipping below is from the Shetland Times dated 23 Jul 65. It shows what I think is a Westland Wasp at Fort Charlotte, in the centre of Lerwick: 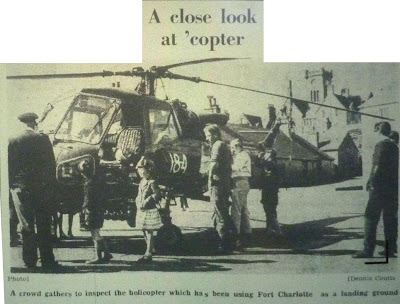 Another clipping of a helicopter in Lerwick, this time a civilian aircraft - this comes from the Shetland Times edition of 5 Jun 70: 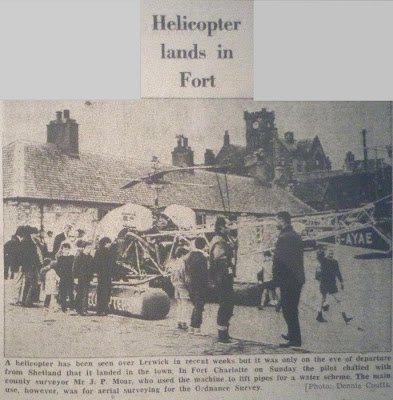 The next helicopter event was mentioned in an earlier section: http://ahistoryofrafsaxavord.blogspot.com/2010/05/special-deliveries.html
But when “new” photos become available it’s worth going over a bit of “old ground”. In 1972 an S259 was deployed from 1ACC at Wattisham to Shetland. The radar and associated equipment arrived at Sumburgh in a Hercules. From there it was transported to & from the Tech Site on Saxa by 2 Pumas from RAF Odiham. The airfield at Baltasound was used as a “staging post” and Rein Boomsma had the photo below of himself, with one of the Pumas, taken there. Rein was then working as an ADO/ASOp at Saxa: 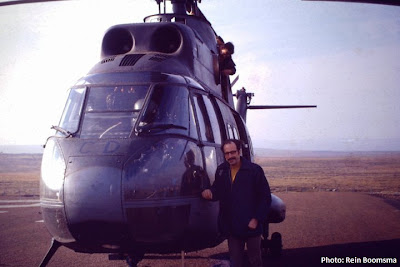 Rein also took the next 2 photos during the S259 deployment: 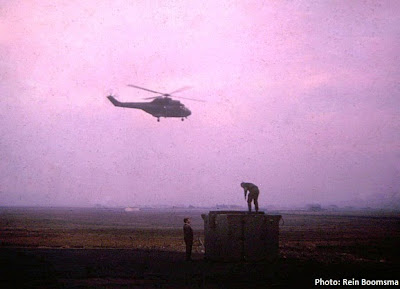 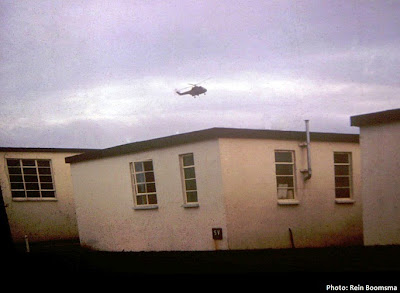 The next picture has also been seen before as a photo but on this occasion the picture is contained in a clipping from the edition of the Shetland Times published on 27 Oct 72:

In Feb 1982 an RN Sea King, from Lossiemouth, was used to take a sick crewman off a submarine north of Shetland. The submarine, HMS Onslaught (Oberon Class), was built in 1959 and decommissioned in 1990. I presume the normal SAR Sea King, based at Sumburgh, was either involved in other duties or else there may have been a little more to the operation than the press releases admit. I’m not immediately convinced that the position of a non-nuclear submarine, in peace time needs much protection. This incident was reported in the Shetland Times of 26 Feb 82.

The following month the Light keeper on Muckle Flugga became ill and, after 3 days of high seas, the local GP, “Doc Robbie” decided help was needed. The following 3 pictures, the first from the Shetland Times, Mar 1982, and the other 2 from MOD sources, tell the story and I note it is also an RN Sea King involved: 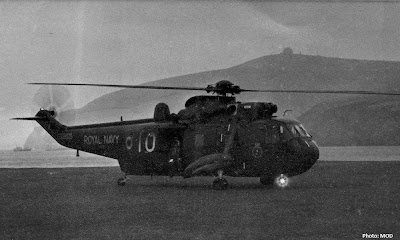 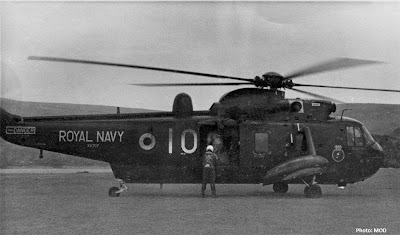 In 1983 Flt Lt Eugene O’Brien, who I believe was OC Shetland Radar at the time, was on duty when the unusual incident described in this extract from the Aberdeen Press and Journal issued on 6 Mar 83 occurred: 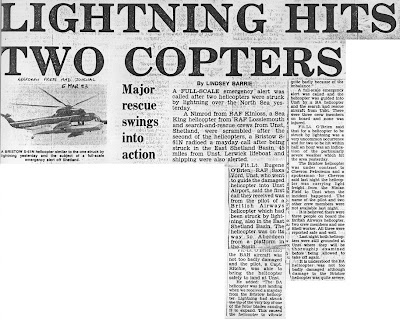 In the 1980’s the TACAN site was changed from Saxa Vord to Vallafield. Sometime later it was decided to add a standby generator. The next clipping, from the Shetland Times dated 23 Feb 90, shows the generator being lifted into position by a Chinook.

There were many other instances of significant helicopter operations during this period. However, I am restricted to mentioning those I have data and pictures of. If anyone has details of any other interesting incidents connected with Saxa or Shetland I would be pleased to hear from them; gordon.carleATgmail.com (replace the AT)