This section will raise more questions than it will provide answers. However, by telling what I know (or think I know), I hope to trigger some memories which, in turn, may provide answers to outstanding queries.

As far as I can tell, all US/NATO activity in the Admiralty Buildings at Saxa had come to an end by 1964. Bertie Henderson had been left as a caretaker for the buildings but I can find no record of new “outsiders” on site again until May 67. In that month 4 visitors from MOD(Navy) arrived and spent up to 11 days on site. Two of the visitors came from the Admiralty Research Laboratory at Teddington, the organisation which had run the earlier trials in the 50’s. The other two visitors, a Mr Williamson & Mr Packman are noted as belonging to MOD(Navy) Submarine Cables.
My best guess is that the visit in May 67 was to determine the condition of the Admiralty equipment and cables left behind from the 50’s trials – hence the inclusion of 2 cable experts. In the following 10 years I have been able to discover 25 further visits by MOD(Navy) staff, mainly from Teddington but there were a couple from Mr Marchant from the Department of Naval Security. Sometimes the visits were just by one person, most of the time they were by 2 people and occasionally by up to 4 at a time. The visits were not normal MOD jollies – they took place in mid-winter as well as the as the mid-summer months. There could well have been more frequent visits but I have names & dates for those mentioned. (Note 1. Is a list of dates, names of visitors and purpose of visit, if recorded, between 1959 & 1977. The data has been gleaned from Visitors’ Books etc and is unlikely to be complete – I publish the list in the hope that one of those listed reads it or an acquaintance reads it – I really would like more information!).
Unless new equipment had been installed – for which I have so far found no evidence – part of the old system must have been reactivated. They could not have been working on the US/NATO System as no appropriate 60Hz/120volt power supply was available. Of the subsequent visits I find it particularly annoying to know that 8 of them happened when I was serving at Saxa. Indeed people could have been working in the Admiralty buildings whilst I was on duty in the R10, clueless as to what was going on!
The last 2 visits that I know about were at the end of March and at the beginning of May 1977. Coincidently, Bertie Henderson, who had been associated with the Admiralty Buildings for over 20 years, died in Jan 77. After May 77 I have found no mention of MOD(Navy) activity on the site.
A number of people have mentioned that Bertie Henderson visited the site once a week and had an office on the top floor of the Admiralty Building with a great view of Muckle Flugga. They have also told me that once a week Bertie would deliver a “tape” to the local post office for onward transmission – where it went & what it contained has yet to be discovered.
After 1977, MOD(Navy) appears to have lost interest in the site. By 1980 the 2 storey Navy Annex had been transferred to the RAF. In subsequent years the use changed but initially the bottom floor became a radar workshop and the second floor was occupied by the R10 Registry, OC Eng and OC Radar Servicing Flight Offices. The 3 storey Admiralty Building may have been transferred at the same time but was not put to use by the RAF until much later (1987+). This is probably because the building did not meet Health & Safety Standards. Fire escape from the upper floors was a situation where you wouldn’t want to be last in the queue. According to John Stott a fireman who was at Saxa in the seventies :- “Hapless firemen had to test the old escape system. These were Davy Escapes, single harness and a steel cable fed from a slow release drum. They went back up for the next evacuee to use. They really were horrible and were outdated in the seventies when I was there”.
The drum was securely attached to the wall and it was one person at a time out of the window. In 1987 HQ Strike Command approved the building of an emergency stairwell and at the same time approved metal cladding and a peaked roof for the building.
The appearance of the building changed from this (left click on pictures to enlarge):- 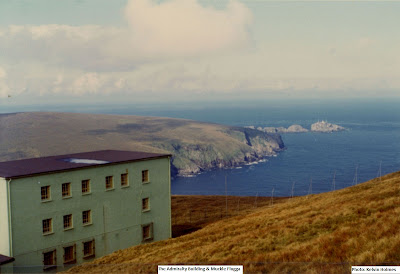 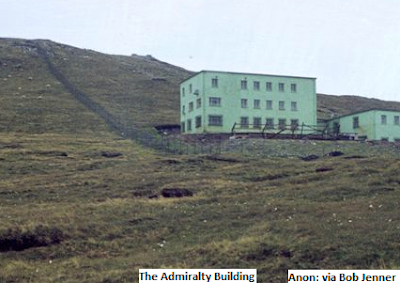 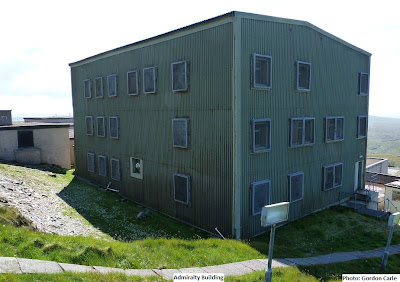 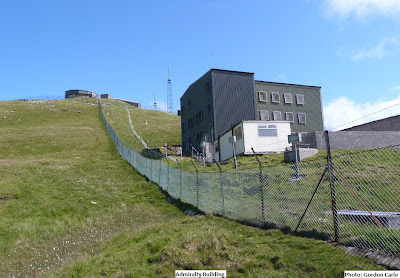 Once the alterations had been made to the building the RAF began to make use of it. According to Frank Joseph, who spent many years at Saxa both in the RAF and as a civvy: “On the ground floor first right there was a large kitchen area where food was prepared on night shifts and exercises. Two or three offices were also in this corridor which led to the canteen/TV room at the bottom left and opposite this was an office used by the radiotech guys. From the canteen there was a door which led into a porch area with a choice of using the emergency exit door to outside or a stairwell which led up to the next two floors, the first of which was used to store lockers which housed site personnel personal gear, with good views out to Muckle Flugga. I always remember that I used to go up there for my lunch break as it was also handy to look for any birds on the fence wires. I cannot recall what was on the top floor but sure that I did visit it”.

The use of the building changed as time went on. Someone has mentioned that the “war rations” were kept there at one stage. A major reduction in establishment took place prior to the change in status to Remote Radar Head (RRH) Saxa Vord (effective Apr 2001). It became no longer viable to have a small number of service and civilian personnel spread over such a wide area. In Aug 2000 the SHQ and Main Guardroom staff were moved up to the Mid (Ops) site and this led to a reallocation of space, especially in the Admiralty Building. Less than 3 years later, with the announcement of the closure of RAF Buchan and the reinstatement of separate Unit Status to Saxa, the SHQ and main Guardroom staff returned to the Domestic Site. I believe that the Mid (Ops) site became almost derelict after this and that all operations were carried out from the Type 93 at the Radar Site. By this date the number of service personnel at Saxa had reduced to about 65 – for most of the life of the Unit the strength had been around 190. I have been unable to find evidence of the Admiralty Buildings being used after Feb 2003.
RAF Involvement in Admiralty Trials?
There are a number of scraps of evidence to suggest that the RAF had some direct involvement in the trials:
The 1953 outline of plans for the Admiralty Building, included in the section http://ahistoryofrafsaxavord.blogspot.com/2011/09/admiralty-building-and-underwater.html
required the provision of a radar similar to the Type 277 (about the same vintage as the Type 13 & 14). Another plan from 1954, also provided by Bob Jenner, required that a Type 64 console be installed: 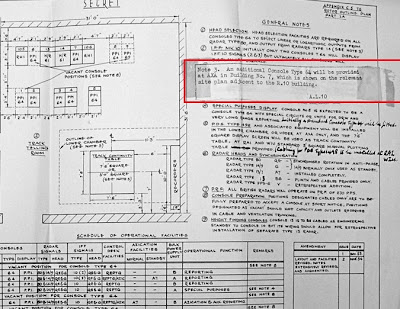 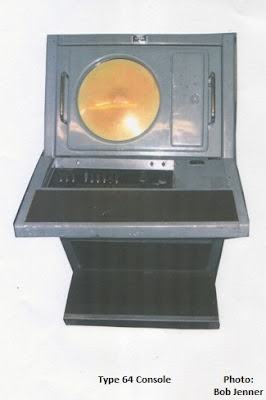 Whilst the trials were “Top Secret” two mentions of RAF Controllers from Saxa being involved appeared in the Official Station History – which was just” Secret” at the time – I suspect the entries should not have been made and that there were other occasions when a control service was provided but not recorded – who knows?

Another indication of some participation by the RAF was in Aug ‘61 when Fg Off ND Gaskie from a Shackleton MR2 Squadron, based at RAF Ballykelly, visited the Unit. The purpose of the visit was given as “AES” (Admiralty Experimental Site) - I’m sure it wasn’t just a casual liaison visit to a Top Secret location. 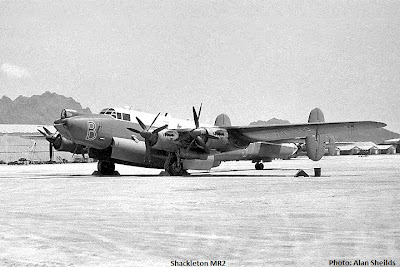 The last small pointer I’ve found also comes from the Official Station History. In June 1970 Eng staff recovered the Type 64 console from the Admiralty Building for RAF use:

This indicates, firstly; that RAF Engineers knew it was there and, secondly; that the RAF knew it was no longer required by the Admiralty.

The Admiralty Experimental Site and RAF Saxa Vord co-existed for 20 yrs (’57-’77). There were common access routes, water supplies and power supplies. Formal agreements at MOD level must have existed between the RAF and the RN. The fact that none of the these arrangements were openly shared at a working level by RAF personnel , suggests to me that during the period there was no “operational” use of the Admiralty Buildings, only intermittent occupation for trials and/or data gathering! I would welcome more information should anyone be in a position to supply data:
gordon.carle@gmail.com
Note 1. List of Known Visitors to the Admiralty Buildings -1959 to 1977


As I said in the main part of this section, I suspect there were more visits than those listed. Anecdotal evidence I have suggests Cdr Blair (USN) visited Unst on more 2 occasions and that Mr N H Field from ARL was a fairly frequent visitor, with friends among the local population of Unst. I’m sure that more information is available – it’s just a matter of locating it!
gordon.carle@gmail.com