In Nov 2009 a short section about the Overland was put out:
http://ahistoryofrafsaxavord.blogspot.com/2009/11/overland.html
Since then a number of people have been kind enough to allow me to use some more photos of the “overland” route and so – “The Overland Part 2”. A collection of photos follow and I thought I would post them in the opposite direction from the first section; i.e. this set starts at Belmont in Unst and finishes at Toft on the Mainland.
Starting from the Camp the first segment of the trip began in an old bus, usually driven to Belmont by the late Graham Hunter. There are numerous stories about Grahams’ driving abilities but I am not in a position to be able to verify or deny any of them.
The Bluemull Sound Crossing from Belmont to Gutcher was the shorter of the 2 overland ferry crossings, less than a mile & a half - if the wind and tide would allow a direct crossing. From the opening of RAF Saxa Vord until the introduction of the RoRo Ferries in Nov 1973, the route was operated by the Tystie, skippered by Davie Johnston (Tystie is the Shetland name for the Black Guillemot). (Left click on pictures to enlarge). 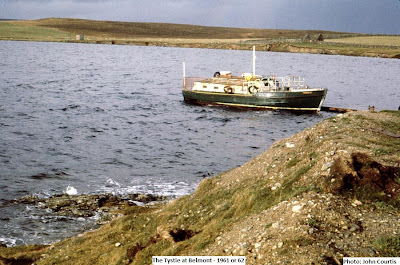 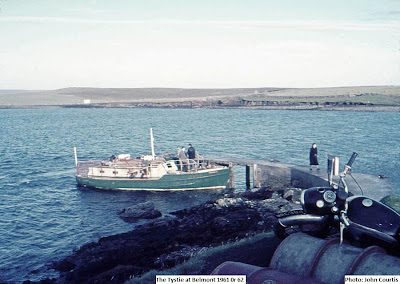 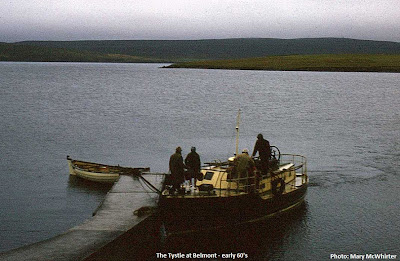 The crossing was not always rough. 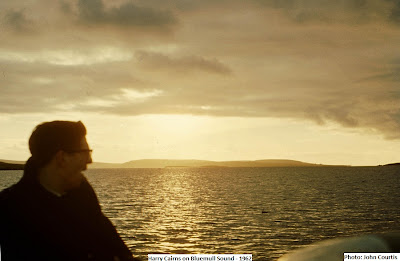 On arrival at Gutcher it was necessary to disembark – not always simple at low tides and/or rough seas, especially for the old and infirm. Luggage then had to be carried to the next bus before setting off to Mid Yell on the next leg of the journey. The OC Administration Squadron in 1964 was Flight Lieutenant Dickie Bird, who did not make himself popular with  the ferrymen, or airmen travelling on the ferry, by taking his Honda or Vespa scooter on trips to the Mainland and expecting everybody else to  heave it on and off the Tystie and Shalder (the Yell Sound ferry – see below). 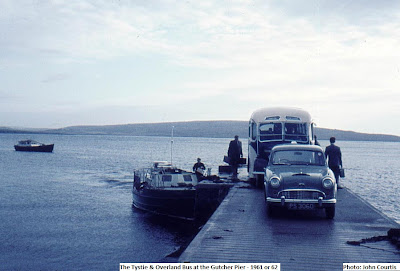 At Mid Yell passengers had to transfer to another  bus for the onward trip to Ulsta at the south end of Yell. The next picture shows the transfer at Mid Yell. The person second from left in the photo is the late Jo Grimond who was MP for Orkney & Shetland from 1950 until he retired in 1983. 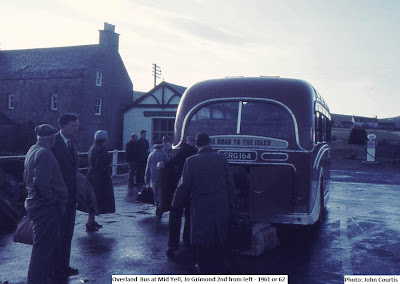 The next group of photos were all taken at Ulsta. 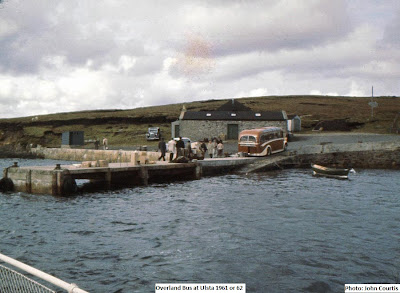 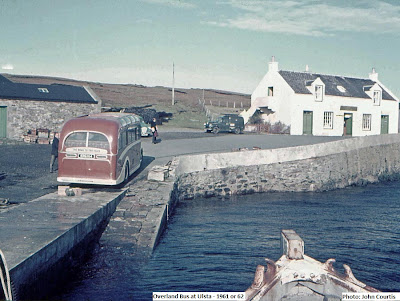 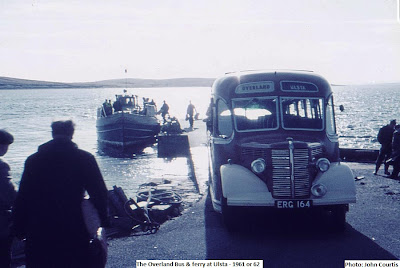 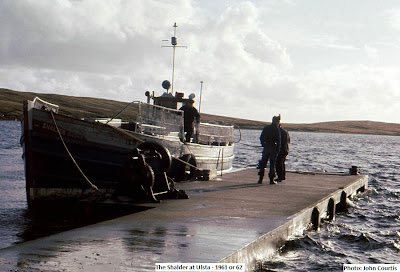 The Yell Sound crossing from Ulsta to Toft (Mossbank in the early Days) was just over 3 miles. The ferry on this crossing was the Shalder (Shetland name for the Oyster Catcher). I’m not sure how many skippers there were in the life of RAF Saxa Vord. I know Bob Jarmson was the skipper in the early 60’s and the by the late 60’s Harry Ritch had taken over. The photo following shows the luxurious luggage stowage facilities on the crossing. Thanks to Barbara Priest for reminding me that, in the days before the Air Ambulance and Coastguard Helicopter, seriously ill cases heading from the North Isles to the Gilbert Bain Hospital had to haven their stretchers lashed here in place of the suitcases! 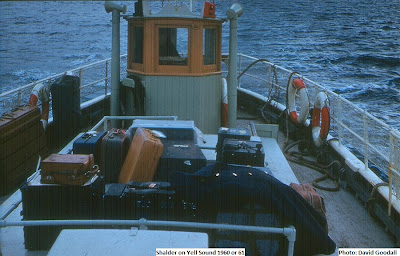 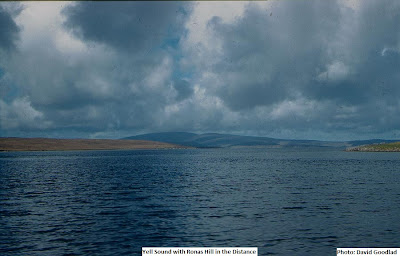 The next 5 pictures show the Shalder approaching, or departing from Toft and are followed by one of the Shalder at the pier 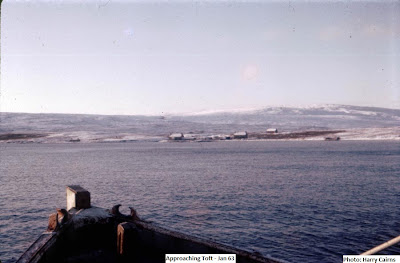 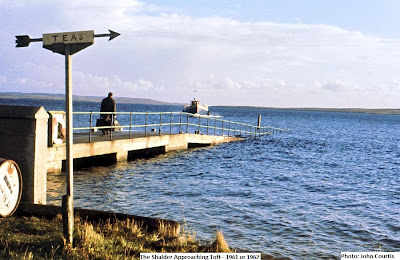 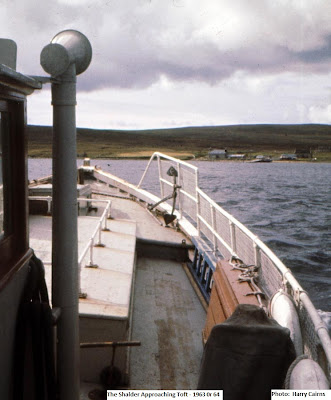 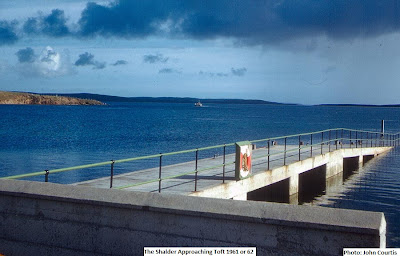 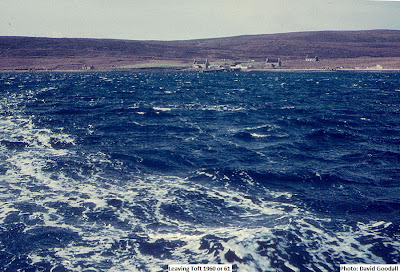 For a number of years I thought that the next photo had been taken at MId Yell, thanks to Vivian Clark I now know the scene is at the Toft Pier at the north of the Mainland. The picture shows a Rolls Royce Shooting Brake with Jo Grimond, the local MP of the time, standing alongside.  Brian Duncan has supplied some details - "the Rolls was owned by Bob Storey, he was a development officer based in Lerwick, prior to that a teacher at Sandwick". The car was auctioned down south in 2007 and a note about the sale has been added at the end of this piece. 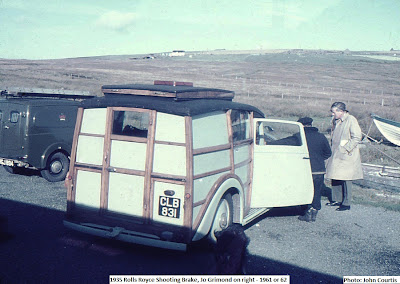 ﻿
﻿
On arrival at Toft it was simply a case of transferring to the final coach, operated by Leasks, for the trip into Lerwick. I say final coach but that would mean that the passenger would have been staying on the mainland or transferring to the MV St Clair in Lerwick for the 14 hour scheduled trip to Aberdeen. If, on the other hand, the passenger was flying south it would necessitate a further bus from Lerwick to Sumburgh. Weather permitting it was possible to make Saxa to Aberdeen in a day – it just seemed longer! Before the RoRo Ferries the roads were nearly all single track with passing places. Negotiating places like Dales Lees - the long hill north of Voe - when 2 large vehicles wanted to go in opposite directions were events to remember.
Note – 2007 Auction of CLB 891
A 1935 ROLLS-ROYCE 2 0/25 SHOOTING BRAKE Registration Number: CLB 831 Chassis Number: GBJ64 Engine Number: M6C Light Grey with Tan Leather Interior Engine: Straight-six, overhead valve, 3699cc; Gearbox: Four speed manual with side change and synchromesh on top ratios; Suspension: Beam front, live rear with semi-elliptic leaf springs front and cantilever, leaf springs on rear; Brakes: Four wheel mechanically-operated servo-assisted drum. Right hand drive. In the 1930's Rolls-Royce would supply the chassis (see original invoice for chassis number GBJ-64) for individual coach builders to build their own bodies to customers requirements and it is not unusual for a car to be re-bodied more then once. This car started as a saloon and was converted in the 1950's by Jack Conten of Kensington High Street, London, his trade plates affixed to each door sill. It was converted to a two-door, ash-framed, aluminium skinned shooting brake, seating four or five passengers and with a maroon "Everflex" roof. The dashboard is veneered walnut and the window screen is hinged at the top to allow fresh air to ventilate the interior. There is a substantial luggage area behind the rear seats, which requires cosmetic enhancement as does the interior roof which is unlined. The wheel discs are optional and could be removed to reveal the wire spoked wheels, for a more sporting appearance. The car has a current tax disc and MOT (although road tax exempt) and is immediately road worthy and drivable.