The history of the WRAF at Saxa is fairly complex. As in most issues, the situation with Officers was different from everyone else. I don’t claim to have all the data but I do have information about a number of WRAF officers on strength – much of the information comes from the “Red Star Board”. The first member of the WRAF posted to the Unit that I know of was Bridget Ottley, she was accompanied by her husband Mike. They were both Fighter Controllers and both of their names appear on the "Red Star Board" from Feb '70 onward, having carried out intercepts against Soviet Badgers and Bears. They were accommodated in part of Station Sick Quarters during their tour. 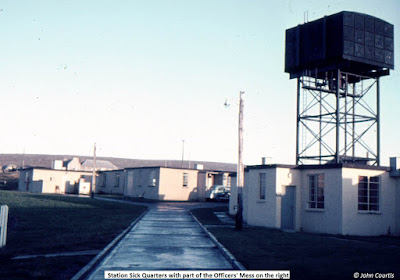 Plt Off Sidebottom seems to have been the second member of the WRAF posted in – she is recorded as having intercepted 2 x Badgers in Oct 71. Between then and around 1990 there were a number of female officers posted in; as far as I’m aware they were all controllers & all junior officers. The names I know of include – Silvers, Crouch, Drew, Love, Salmon, Jago, Harrison, Whiteway, Northcott & Bell. I don’t claim this as a complete list – it’s those I have on record. There may well have been others and certainly by 1991 there was an Admin Officer by the name of Fg Off Liz Larsson. Without doubt the accommodation and facilities available to female Officers were considerably better than those offered in the average Barrack Block before the domestic site was rebuilt.
So - what about the non-commissioned WRAF? I am not aware of any move to post any females (other than officers) to Saxa before 1975. In Oct 1975 Group Captain MacKintosh WRAF visited RAF Saxa Vord to look at facilities with a view to posting in WRAF personnel. Her conclusion, as recorded in the Official Station History – “She considered Saxa Vord unsuitable for WRAF habitation”. So that was that for the next 15 years or so!

With only one or two female officers about the words of the 1959 Coasters hit “Poison Ivy “were appropriate for the single airmen on base –“You can look but you better not touch”. Around the start of the 90’s things started to change - towards the end of the rebuild someone must have considered the place more suitable for WRAF habitation! Approval was given for WRAF non-commissioned personnel to be posted to Unst.

During the period when “Flash” Gordon was CO it was agreed that up to 28 airwomen could be posted in to join the 2 females then on site. I was slightly incredulous when I learnt of the next part of the saga. A campaign was mounted to try to persuade airwomen to volunteer for a posting to Saxa. I have recollections over 22 years of service of being allowed to express preferences over postings – the preferences were usually totally ignored and I ended up going where I was told (however, I do admit to being fairly lucky with the results).

This campaign did not have the desired results and it was picked up by (or leaked to) the media. The 4 clippings below are all from Mar 1992: 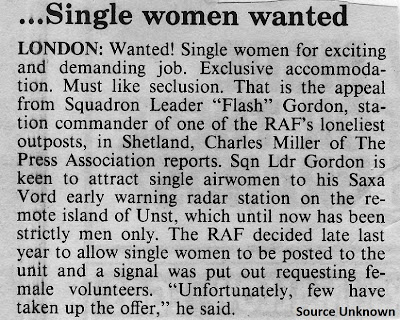 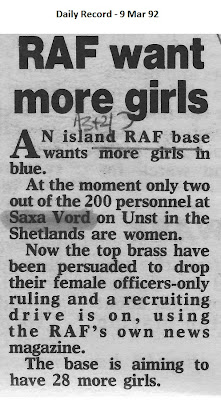 ﻿I don’t know if the target percentage was ever met for airwomen on site - I somehow doubt it. I do know that, at times, there were significant numbers of WRAF present. I suspect that there were a number of married couples posted in and I am aware some members of the WRAF did apply for extensions. In a picture of 90 service personnel, taken near Christmas 1999, it looks like there were 10 females present - so some headway was made. At the time the total military strength of the Unit would have been about 140.
Thirty-three officers were in command at Saxa during its lifetime (1957 to 2006). All but one of them were men. During the period Apr 2001 to Oct 03 Sqn Ldr Amanda Giles was the Detachment Commander RRH Saxa Vord and the only female to be in charge in the history of the Unit. By coincidence, for the first half of her tour her boss – OC RAF Buchan was also female – Wg Cdr Aileen Ronaldson.

The final clipping in this section is from the Eastern Daily Press (more commonly known as the EDP and based in East Anglia). It was published when Sqn Ldr Giles was in command. (you will need to Zoom or download to read). 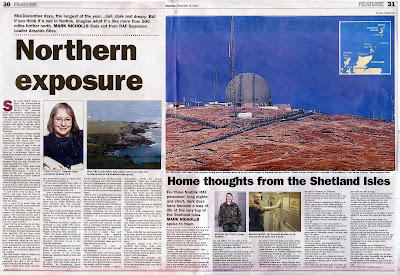 If I have made mistakes or made significant omissions I would be pleased to hear from you: gordon.carleATgmail.com
CONTENTS LIST
http://ahistoryofrafsaxavord.blogspot.co.uk/2012/03/contents-list.html
Posted by Gordon Carle at 23:46