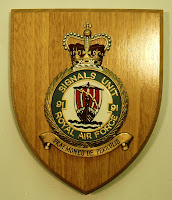 The equipment for Saxa started arriving on Unst in 1955 and there was an influx of civilian contractors and servicemen from that time onwards. The construction phase was eventful, delays in equipment arriving, some very bad weather and the loss of the first Type 80 radar head early in 1956 being some of the problems faced. However, by the autumn of 1957 the civilian contractors and RAF signals staff were ready to transfer the equipment and buildings to RAF Fighter Command for operational use.

A large number of Officers & Civilians assembled on Unst in Sep 1957 for the handover of both the Technical and Domestic sites. The 3 pictures below show extracts of the first month’s entry in the Official Unit History (The Unit F540) - now declassified. The first CO, Sqn Ldr Millar, notes the lack of spares, stationery and furniture in his summation at the end of the extract.

I apologise for the poor quality of the pictures below but it was the best I could achieve at the time. (Left click on pictures to enlarge and some zooming will probably be necessary). 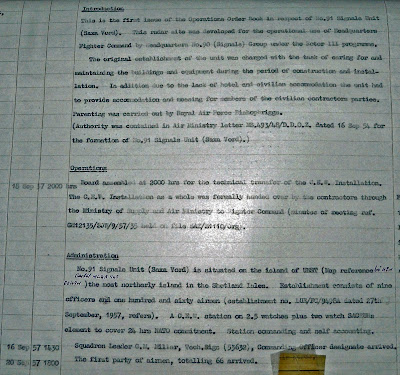 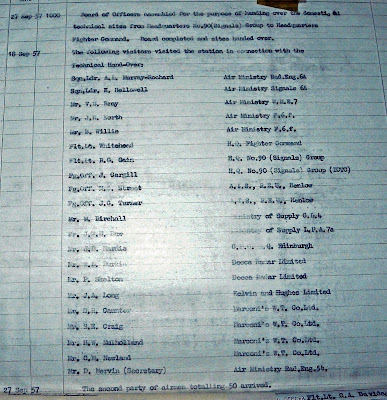 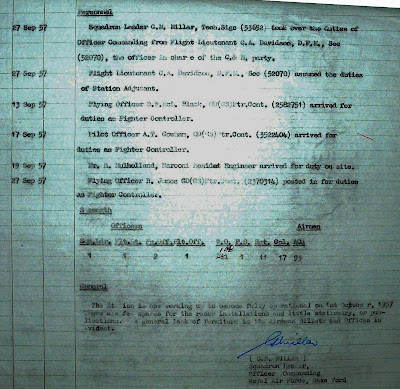 I started this section with a photo of a station plaque. It is unlikely that anyone posted to Saxa in the very early days would recognise it. I don't know who designed it or when it originated but I do know it was in existence in the mid 60's. I have read somewhere that it did not receive formal approval from the College of Arms/Inspectorate of RAF Badges until the 80's. If anyone has any information about the designer and the early history of the crest I would be pleased to hear from them. (Added 5 Nov 14 - see http://ahistoryofrafsaxavord.blogspot.co.uk/2012/10/saxa-vord-first-commanding-officer.html )
CONTENTS LIST
http://ahistoryofrafsaxavord.blogspot.co.uk/2012/03/contents-list.html
Posted by Gordon Carle at 21:36