The text below is largely based on information received and my guesswork using the pictures I have available. If anyone with more knowledge of the TACAN on Unst sees any mistakes I would appreciate it if they would get in touch so that I can amend this section:- gordon.carle@gmail.com

The name TACAN is based on the full name of the equipment – Tactical Air Navigation System. It was designed for the military and suitably equipped aircraft could obtain a slant range and bearing from the equipment. If an aircrafts crew could interrogate 2 TACAN sites it was possible to fix their position very accurately by triangulation.

My first attempt at publishing this section has been amended after receiving advice from Steve Harrison who worked at the Transmitter/Receiver sites from Nov 91 to May 93. He and his section were responsible for the TACAN. I have also received some significant information from Bob Jenner

TACAN at the Top Site
The picture below has been produced from 2 pictures sent by Bob Jenner of the Air Ministry Plan for Saxa’s TACAN dated 1958 (the poor attempt at joining the 2 pictures was my responsibility!). I believe that the equipment must have been erected in that year or very soon thereafter. 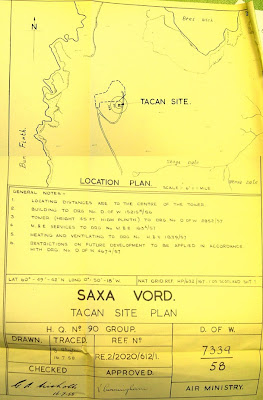 The next photo, taken in 1963 from Burrafirth, shows the TACAN beacon to the right of the Type 80 before the radome was built.

The next 3 photos show the TACAN aerial on Saxa in the years following. 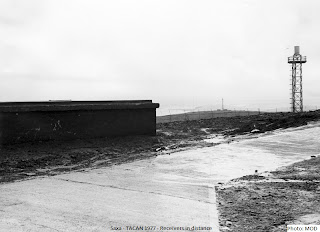 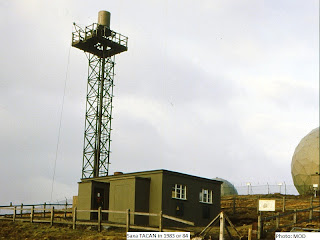 TACAN on VallafieldIn the first half of the 80’s it was decided that the TACAN should be relocated to Vallafield, about 10km (6 miles) SSW of Saxa. I don’t know why the move took place - possibly because of interference with other equipment or because of line of sight obstruction caused by too many aerials on site. The move did not go too smoothly as there were problems in getting permission to construct an access road. Eventually a 5km track was constructed from near the south end of the Loch of Watlee to the trig point at the top of Vallafield (216m – 708ft). I’m sure that permission would be refused nowadays as Vallafield is a significant breeding area for Red-throated Divers. The next 2 photos show the Vallafield TACAN just as it was made operational in 1986 - it was enclosed in a 20ft radome. The TACAN installed was a mobile version 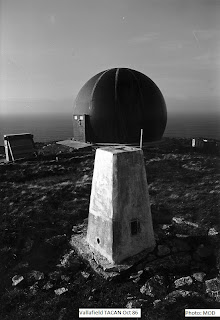 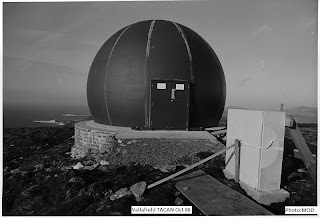 The next 3 pictures show Vallafield from the air in late 1991. 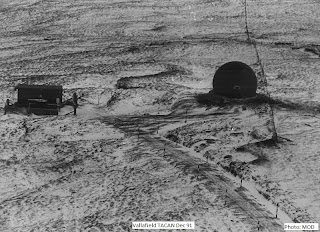 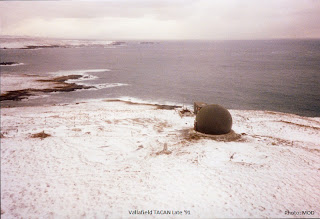 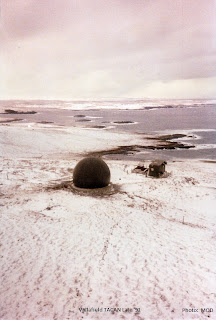 Those who were on Unst for the New Year 31 Dec 91/1 Jan 92 will remember the night well – the worst storms in living memory. Practically every item of equipment was destroyed or badly damaged (this night will be the subject of a long section in the blog in the future). The TACAN on Vallafield also incurred the wrath of this storm. The radome was completely shattered, the TACAN severely damaged and beyond economical repair. Sometime later the dome was rebuilt and a new mobile TACAN was delivered from the UK mainland. After Flight Trials the site was re-commissioned in 1992/3 – Thanks to Steve Harrison for correcting my earlier version of events.

Footnote
The following photos were taken during a walk on the west side of Unst in May 2010 and show the remains of the TACAN site. The access road is still there but there is a sign at the bottom of the track saying it is unsafe for vehicles. There is also a locked gate at a cattle grid some distance from the top. However, there were recent tyre tracks right up to the old radome base!. 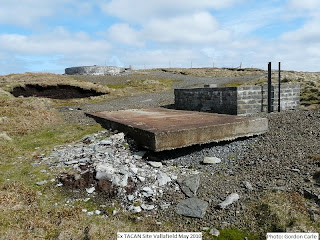 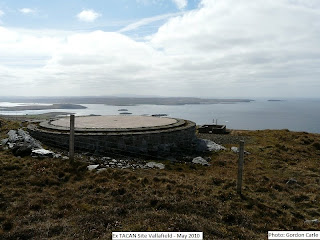 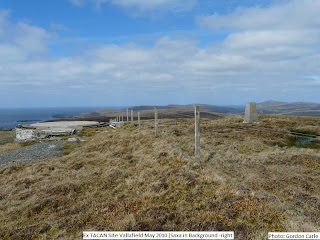