Usually there were enough musicians on strength at Saxa to form a group on the Base. Obviously their abilities ranged from excellent to not so excellent, but for most of the time there were a number of competent musicians capable of playing at Dances on the camp and often further afield. With the nature of the RAF posting system a particular group could have a number of different members over a period of time. In the same way, an individual extending his tour length or returning for a second tour could end up playing in more than one band.

I wrote about “The Hustlers” (1962 to 64) one of Saxa's early groups earlier :  http://ahistoryofrafsaxavord.blogspot.co.uk/2010/03/hustlers.html   and  a more extended piece here: http://ahistoryofrafsaxavord.blogspot.co.uk/2014/04/the-hustlers-saxa-1962-to-1964.html
In this section I intend to publish the information I have about the mid sixties and early seventies. I’m grateful to Andy Parkinson (Supplier, Saxa 68 to 70) for information and photos on the groups “Plesance Fogg” and the “John Baker Big Band”. The rest of the pictures came from my wife and my late father-in-law.

Pleasance Fogg & The John Baker Big Band.
The following text & pictures came in emails from Andy Parkinson:-
"When I arrived at Saxa I reported to the guard room and was greeted with "You must be the new bass guitarist" and was immediately inducted into a group consisting of Rod Stevens guitar, Dave McBain Guitar/vocals and myself on bass/vocals. I can't remember who the drummer was possibly a clerk called Les ?. The band was called "Plesance Fogg" (very hippy like Canned Heat). When Dave left big Bll Gibb stepped into the breach on lead guitar, flute, saxophone and clarinet. 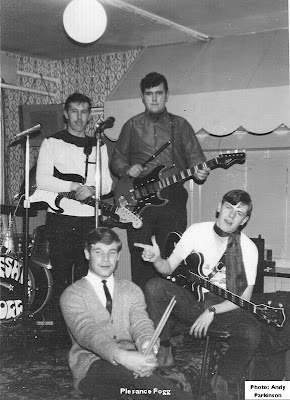 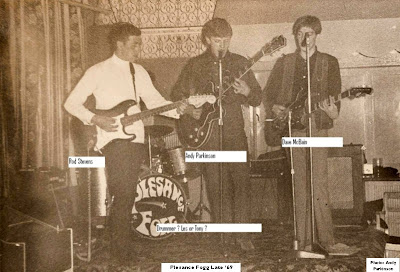 With the arrival of Sgt John Baker the band took on a different look with a budding brass section. The addition of another lead guitar in Gwyn (Taff) Williams and yet another change of drummer to Ernie Perridge, the trombone of Malcom Browne and trumpeters Jimmy Green and An other, the name changed to "The John Baker Big Band" . Still going strong when I left. Sadly I have since learned that John Baker has passed away. He was a very good musician and taught us youngsters a great deal.” 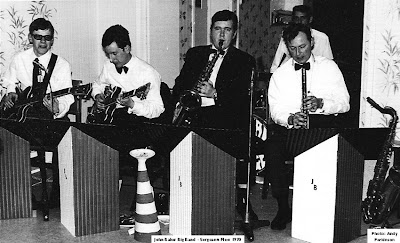 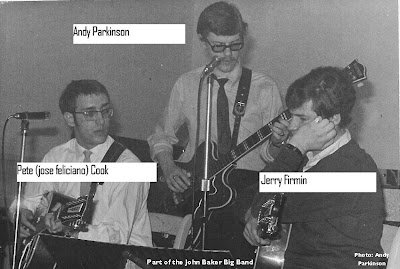 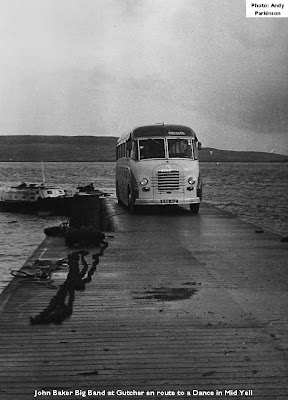 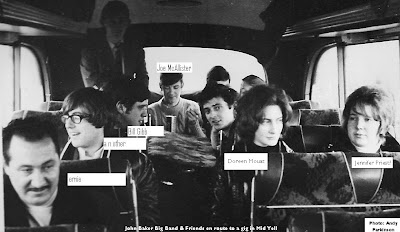 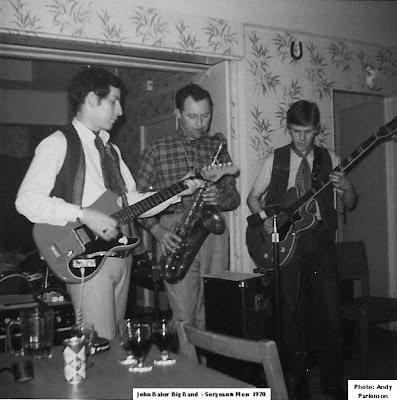 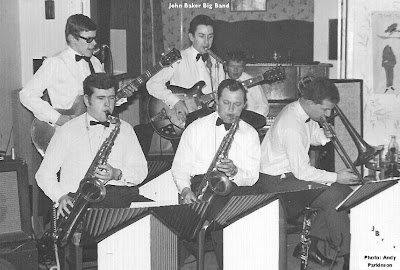 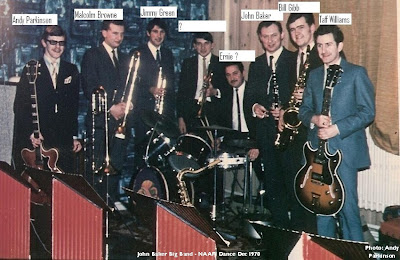 Plesance Fogg and the John Baker Big Band definitely made favourable impressions making numerous appearances in the NAAFI, Sergeants’ and Officers’ Messes. Not only that but they played in the Public Halls, Springfield, Mid Yell and even played in Lerwick at one of the Halls in Shetlands main Up Helly Aa Festival. 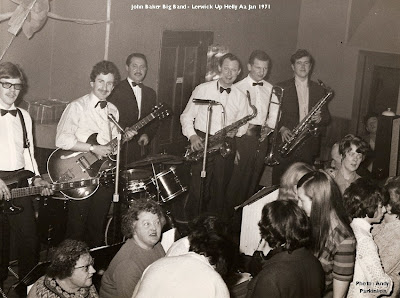 Other Bands
A band called "The Embers" was formed in late1965. It consisted of Doug Slade (lead guitar). Rod Paton (rhythm guitar and singer), Tony Reid (bass and lead singer) and Dave Truman (drums). Doug and Dave were both medics, whilst Tony and Rod worked in Stores.  Doug was the first to leave - posted to Wegberg in June '66 and I don't know if they recruited another lead guitarist. The group managed to achieve a lot in their time together with a repertoire around 40 tunes including:


Money (that's what I want)
Wanna Be Your Man
Wild Thing
Bring it on Home
Route 66
Saw Her Standing There
Sloop John B
Save The Last Dance
It's all Over Now
Last Time
Satisfaction
Get off My Cloud
Hang On Sloopy
House of Rising Sun
Gloria
Keep on Running
They played mostly on the base but were booked for a couple of the local halls and had an overland trip to perform in the Planets Ballroom in Lerwick. The pictures below were taken at a Christmas function in 1965. I'm grateful to Doug and Rod for their help. 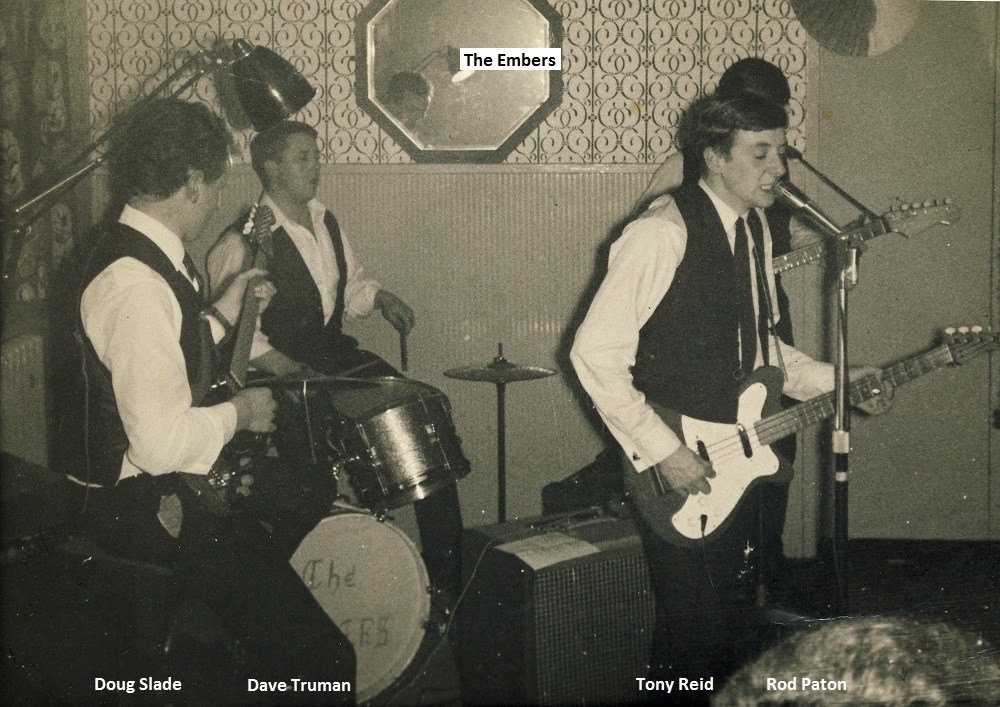 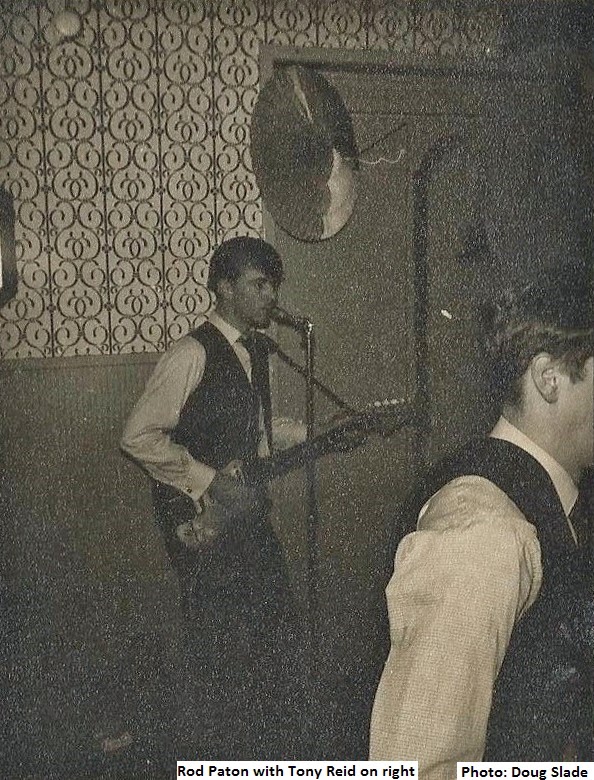 When I arrived at Saxa there was a camp band was called the “Six-Sided Sound” but I know little about the Group. During the period 1967-69 the bands I came into contact with on the base seemed to be ad hoc gatherings of musicians. One of those musicians had a very nice Fender Jaguar guitar (so I obviously had to marry her!) - two pictures below:- 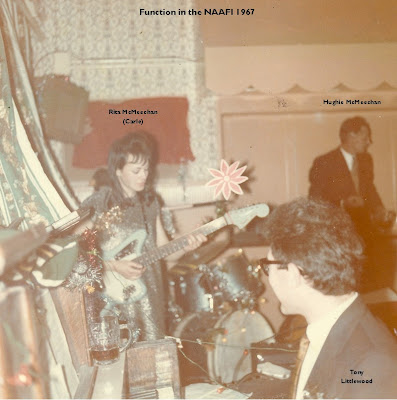 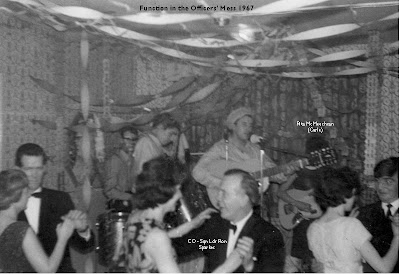 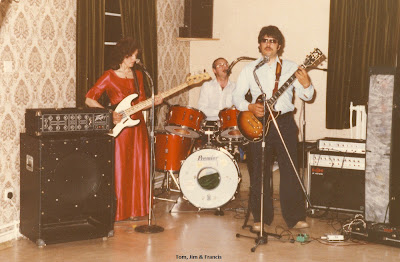 I have Little  information about the group in the picture below - I believe it was about 1964/5 and probably taken in one of the local halls, The drummer was Jimmy Hopkins and the bassist was Bob Sunter if anyone can supply the remaining name or any other information about this group – or indeed any others from Saxa. My email address:-
gordon.carleATgmail.com (replace the AT with the normal symbol) 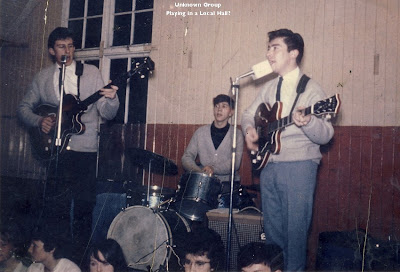