Surface Transport in Shetland After the Mid 70's

With the introduction of RoRo Inter Island Ferries in the early 70's and the drive on drive off MV St Clair IV taking over the Lerwick/Aberdeen route, the nature of transport for servicemen posted to RAF Saxa Vord could be totally different. It was possible to load up a car from a mainland base and take it all the way to Unst. Family transportation could be a lot easier for those who could afford cars. 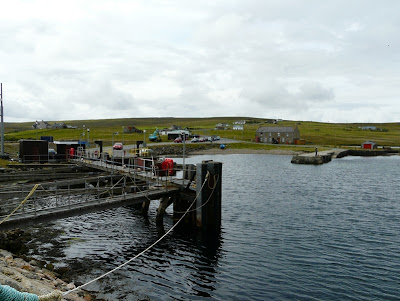 The New Pier at Gutcher - The Old Pier on the Right


For foot passengers the Overland also became simpler. A single bus could take you from Lerwick to the north end of Yell. If you wanted you could sit in your seat until it was necessary to transfer to the Unst Bus. The inter island ferries were not so inhibited by bad weather. It became possible for people to leave Unst and go to Lerwick for a few hours shopping and for sports teams to become active in more local competions. You still couldn't get to Marks & Spencers and back in a day but there was a little more choice in Lerwick than in Unst.