A History of RAF Skaw (AMES 56) - Some service anecdotes

In this section I have included the first-hand experiences of a few of the RAF servicemen who were posted to RAF Skaw. I have tried to put them in a chronological order but some of the accounts contain vague dates. A number of incidents have been recalled by more than one person and there are  occasional conflicts in the details given regarding events and equipment. It has been difficult not to make corrections regarding "facts" but a long period elapsed between the incidents and the memories being  recorded. I have resisted the temptation to alter accounts - they are as remembered by the people involved.  Most of these accounts were collected by my late mother-in-law in the 90's  (Lexie McMeechan, nee Sutherland) and by Squadron Leader Mike Dean, MBE, in the early 90's - I am grateful to them.


First , I recall that we formed up as a unit at Wilmslow in October 1940 and proceeded by train to Aberdeen, marching though the streets to the docks where we embarked on a ship for Lerwick for possibly the most ghastly 24 hours of many of our lives - all so seasick we would willingly have died. We were then billeted in Lerwick for a short period before joining a cargo ship which carried both the personnel and all our vehicles up to the station. The voyage to Baltasound in the hold of that ship holds no special memories, so it was obviously not a repeat of our nightmare trip from Aberdeen. It was probably November by the time we arrived at Skaw and contractors men were still on site for some time. To the best of my recollection the three tall metal masts for the transmitter arrays were more or less complete but I can recall nothing about the receiver masts except they were the standard wooden jobs. I vaguely recall watching an aircraft (a rare event), which I was told was doing fights for calibration. So it is probably correct that we were not fully operational until January 1941.
As to the receiver itself it was, I believe, the same rather primitive equipment in a wooden hut, similar to what we had in a trailer at Carnanton in mid-1940. Could it possibly have been called an RF7?  At the time we arrived at Skaw, Saxa Vord existed as a Naval CHL on the top of a hill about a mile away.  It was run by a very small complement of sailors and we had little to do with them, though I have a vague idea of having visited them once. Another thing I particularly remember about Skaw, although I do not know how it first came up. There used to be a publication (perhaps still is) called the CD 200, which listed all RAF units with their correct postal address and nearest railway station. For the latter, there was only one truthful answer and that was Bergen in Norway!


I well remember the Christmas 1940 period. On one particular day we had an evening meal on long dining room tables, set out in our hut, (as distinct from the Airmen's Mess) and attended by the CO, Sqn Ldr Swinney and the Adjutant, Flt Lt Slater - who was a lawyer in private life (actually a Flt Lt and a Fg Off). The latter turned out to be a humorist who was the life and soul of the party, which totally belied his appearance. 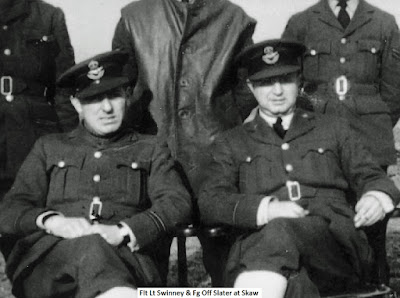 We also had an England v. Scotland football match on Christmas Day. I know Scotland won 4-2. I was left-half for England - our goalkeeper was Cpl Wilkinson (RAF Police) and I believe Freddie Flowers played. I remember Cpl Stewart played for Scotland and their goalkeeper was named Finlay.

It was probably shortly before then this that we were shot up by a JU88 from Norway (no casualties but many narrow escapes) and we were then given rifles and a small amount of ammunition each for our protection. This led to groups of us going out along the cliffs and taking pot shots at anything that moved. Locals were very thin on the ground in those parts but, nonetheless,  protests came in very quickly. With the arrival of a detachment of Argyll and Sutherland Highlanders to give some kind of A.A. protection, our rifles were rapidly withdrawn.
My only recollection of anything specific in the radar field was a night watch when we plotted an FW200 (Condor) for a considerable distance out into the Atlantic. It gave a marvellous response and was immediately identified by our plotting room (this might have been Wick or even Pitreavie) but, much to our disappointment, they soon lost interest and told us to cease sending any more plots.  We seldom saw aircraft, either on the screen of in the air. But, sometime in February 1941 there was a Walrus seaplane that came up to Baltasound or Haroldswick for a few days and in this period I was sent for by the CO (Sqn Ldr Swinney) to be told that my brother, who was under aircrew training at Blackpool, had died. The CO said that he would not attempt to send me to his funeral because it was too far and could achieve nothing. I remember they could have squeezed me into the Walrus and got me down to Sumburgh or Lerwick. It was around this period (Jan/Feb 41) that we were completely snowed up and had to manhandle all our supplies by sledge part of the way from Haroldswick. We used to have working teams of six sent out to do the necessary. It was one hell of a winter up there.
Relief came when we were told that it had been decoded that, in view of our isolation,  our tour was to be limited to some six months. As we had all arrived together we were to have a grand draw to decide the order in which those various groups of trades should depart. I was fortunate to come out as No 1. of the Radar Operators and we were given a tumultuous send-off.

I feel reasonably sure the CO was Sqn Ldr E Swinney (he was a Flt Lt at the time). I have a September 1943 Air Force List which shows him as Sqn Ldr Tech (Signals) at 1 Jun 42 and in a !975 Retired List he is shown as having retired as a Wg Cdr in May 1955 at the age of 48. But, of this first group of 4 or 5 chaps who left then I can only remember the name of the Radio Mechanic, who was a Cpl or LAC Fleming. We were told by the CO that he was unable to grant us any leave but that we should apply for it when we reached our new unit. This was regarded as diabolical, since none of us had had leave since Mar 1940 and we had been through a tough period. I endeavoured to convince my colleagues on the way down from Skaw that, since we were coming from the distant north, no one at our new Units knew how long it would take and, if we all spent a week at home, we could all arrive at roughly the same time - if anyone thought to check up. For instance, if we missed our boat connection at Lerwick for Aberdeen, it would in any event be a week to wait. I was bound for RAF Rye and there was some surprise when I eventually arrived as the signal notifying my posting was by then somewhat old.  I stuck to my story of being held up in Lerwick for a week - sod knows if the others had the effrontery to do the same.


I have attached a list of all the crew who arrived with Flt Lt Swinney in 1940/41 (?). I, and the people on the list, suffered "the awful" voyage from Aberdeen to Lerwick as I frequently recount how, lying on the deck of the boat,  a colleague drew my attention to the fact that my rifle was sliding away to the water - my response to his comment is unprintable!  The equipment for Skaw was loaded onto a fishing boat at Lerwick and the weather compelled us to stay just out of Baltasound until it was more favourable - at this stage the crew had to make the best they could for the night and, I remember, a few of us slept in the back of one of those 3 ton lorries. With the skill of servicemen we soon found that this lorry carried rations and we regaled ourselves with tins of fruit.


The steel masts at Skaw were, in fact, two that had been dismantled from Ventnor - at the time when  the aerial systems were being altered to be slung between two transmitter masts only. The MB2 and associated Receiver  were operated from two transportable masts during the whole of my stay. The station had several visits from enemy aircraft  during this time, apart from the regular passage of a German Condor returning from its Atlantic trips almost every day. On one occasion a civilian, working on the construction site, had an enemy bullet pass through the back of the roll-neck pullover he was wearing - I always understood that he was then required to change his pants! Another bullet passed through the bed of a member of the RAF Police, a few beds away from my own. Having been on night duty, he had only just left that bed! Several more bullets were fired into the occupied dining hall but no one was injured.  It was standard practise to scramble behind  an adjacent stone wall and fire rifles at these planes when they came over quite low.


Flt Lt WDA Smith was the CO at the similar station at the southern tip of Shetland and he came to visit Skaw on one, or more, occasions. I served under Smith subsequently in India and I am still in touch with him, meeting him now and again. We were aware of the Royal Navy, who certainly had a CHL unit operating on Saxa Vord during the whole of my six month stay at Skaw - we could of course see the aerial but, strangely enough, never met any navy personnel or heard of any contact with that unit. I believe I am correct that the Muckle Flugga lighthouse operated throughout WWII with the understanding that they did not communicate any information about shipping movements to anyone. The Argyll and Sutherland Highlanders certainly joined us to defend of Skaw - what a tough bunch they were! They supplied us with .303 ammunition for our rabbit shooting excursions - all of which were unsuccessful! 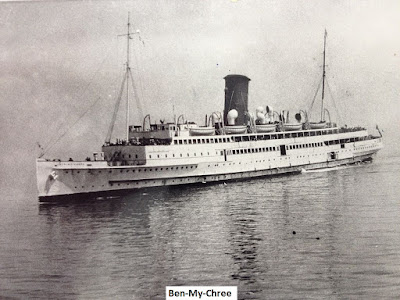