This is the second instalment of Bob Abbott's memories of Saxa Vord and I am grateful to him for sharing his recollections with us.

"I arrived on a posting to RAF Saxa Vord in June 1962.  Located further north than Leningrad and on the same latitude as Anchorage, Alaska, and Bergen, Norway, this northerly RAF Station was named after Saxa Vord, which at 935 ft (285m) was the highest hill on the island of Unst. 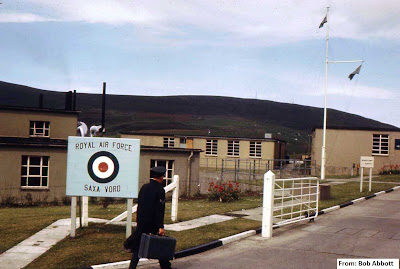 I was to discover that this radar station, with its Type 80 radar, was providing long-range coverage of the airspace to the north of Scotland.  The station's motto "Praemoneo de Periculis", Forewarn of Danger, reflected its role.  Because of its isolated location, my posting there in the summer of 1962 was initially for a limited tour of eighteen months.  Like quite a number of my RAF colleagues, who took to the Shetlanders and island life, I applied to extend my tour by six months.  It was during those extra six months that I was to meet the love of my life, ELizabeth MArgaret Leask.
The station was officially opened on 27 September 1957 as No 91 Signals Unit.  In the following years it was a vital part of Britain's air defence during the Cold War in a game of cat-and-mouse with the Soviet Air Force. 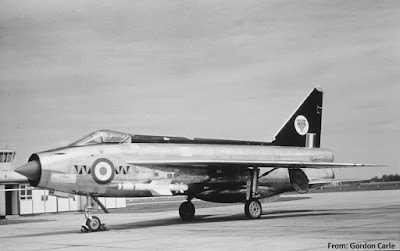 During my time there it was the Fighter Command English Electric Lightning aircraft, from RAF Leuchars in Fife, that intercepted the Soviet TU-95 (NATO code name "Bear") probing flights, which had been spotted by the Saxa Vord radar head, and escorted them out of the UK area off interest. 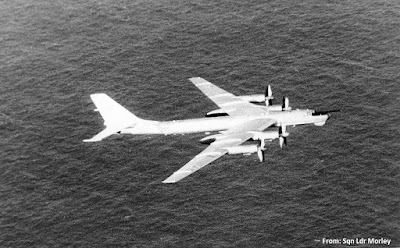 Being a Control and Reporting Post(CRP)/ Reporting Post (RP), it passed its radar picture and information (along with RAF Benbecula) to the Master Radar Station (MRS) at RAF Buchan, which also received information from the Danish radar site on the Faroe Islands.
The Type 80 reflector was unfortunately lost when it was dislodged in a historic gale in January 1961.  I heard that when the radar head had collapsed in the gale that the anemometer had registered a 177 knot gust of wind.  The official photos of the incident showed radar metal mountings torn like sheets of paper and the scanner some distance from its turntable. The scanner was subsequently cut into pieces for disposal. 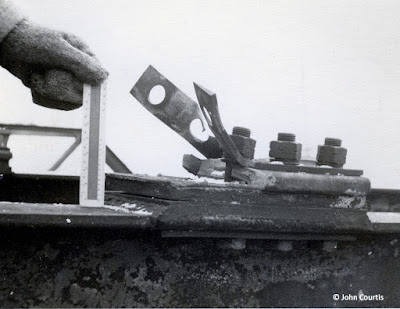 An urgent exercise by the contractors (mainly Currans & Decca) was mounted to reinstate the Type 80.  After flight trials the Type 80, with a new reflector, was accepted as serviceable on 11 Sep 61. During my time there in 1963 a Norwegian firm enclosed the radar with a radome constructed of perspex triangles on a neck of concrete. 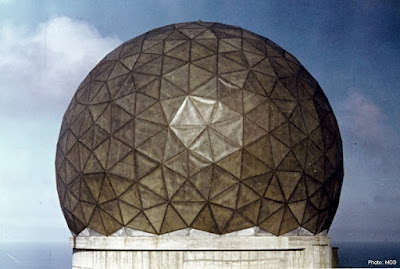 My role on the Station, as the Cpl Physical Training Instructor, was to provide a voluntary programme of sporting opportunities to enhance the quality and lifestyle of the circa 120 personnel stationed there.  The following photo was taken from the water tower on the Domestic Site and shows the camp from the east. 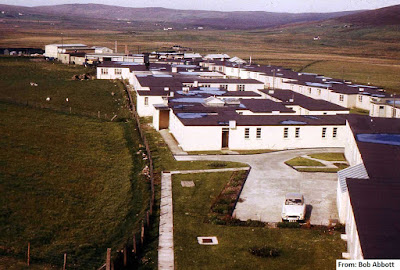 The Water Tower, Sick Quarters and Officers' Mess at the eastern end of the Domestic Site: 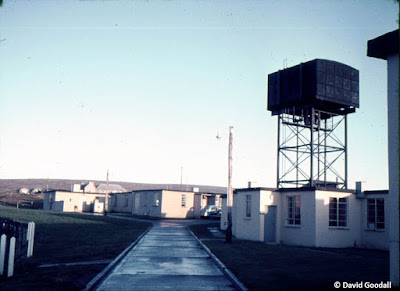 In fulfilling this role the two years on Unst was to prove a very significant highlight in my 36 year career in the RAF.  Future articles will reveal that the memories still linger long, for it is people that make places.  I will never forget my RAF colleagues, the Unst and Lerwick folk, the frequent overland specials for football matches in Lerwick, and the badminton matches in the Unst community halls".
CONTENTS LIST
http://ahistoryofrafsaxavord.blogspot.co.uk/2012/03/contents-list.html
Posted by Gordon Carle at 16:46