Like most sports, soccer at Saxa was popular, whether it was just inter-section 6-a-side tournaments on base or, representing the station. In the early years representing the station usually meant playing both home and away games on the Shetland mainland. In the days before the RoRo inter-island ferries local teams could not afford either the time or the money to make the round trip to & from Unst. For the Saxa teams the overland trip (5 hrs each way) was a more practical option. The services had a separate budget for sporting activities and most servicemen welcomed to opportunity of an excuse to get off the island for a while and the chance to visit the pubs and entertainment available in Lerwick – away matches nearly always involved a night stop in the “big city”. Three or four times a season the lads would be off down to Lerwick on a Friday afternoon, play a match in the early evening and then have a night out on the town. On Saturday they would spend the morning shopping or, more likely recovering, before playing another match in the afternoon. A special overland would be arranged to take them back to Unst early Saturday evening.

One unusual fact about soccer in the islands compared with mainland UK is that it tends to be a summer rather than winter activity. The weather and short hours of daylight meant that holding regular winter competitions was impractical.

The Most Successful Season
In 1962, whilst there were still some National Servicemen on the Unit, Saxa entered the Shetland football league for the first time. The team went on to win the Madrid Cup – the premier Soccer trophy in Shetland. The Cup was first presented in 1908 and is still keenly fought for today. 1962 was the only occasion when a Saxa team was able to lift this trophy. That year the team went on to win just about every trophy available to them. An article from the Scottish Daily Express and a photo of the seasons trophies are below. (Left click on pictures to enlarge). 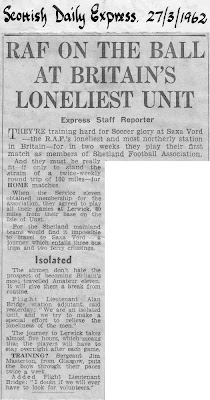 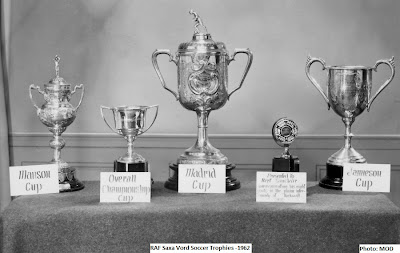 Sqn Ldr J Le Cheminant was the Stn Cdr from Jan 68 to Feb 70. In 1969 he introduced the Le Cheminant Trophy to be played for by the RAF Saxa Vord team and an Unst “Select” side chosen by the local footballers on Unst. This led to a series of matches over the following years. I’m not sure what the fixture consisted of in the early days but later on it was decided over two “legs”. 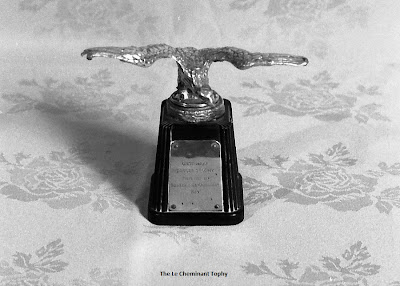 ﻿A couple of the fixtures are the subject of the 3 pictures below:- 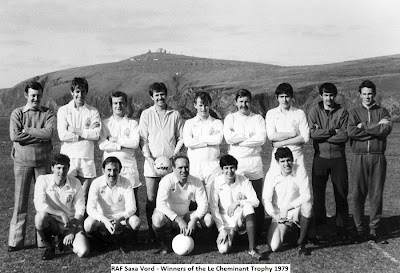 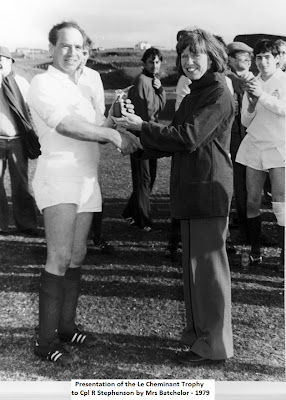 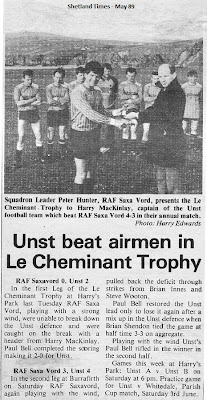 As part of the Station rebuild an all-weather Astroturf pitch was constructed near the site for the Nordabrake Quarters/New Officers' Mess at a cost of £900,000. An article about the official opening in 1991 from the Shetland Times is reproduced below: 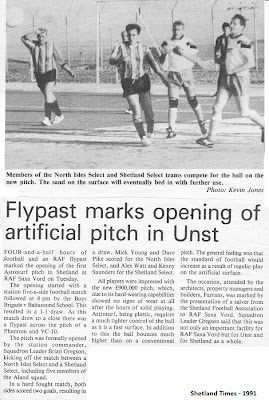 ﻿
During the period when the Unit operated as RRH Saxa Saxa Vord, the strength was reduced to less than 70. I suspect that Saxa could no longer field a full team and the pitch started to deteriorate. After the closure of RAF Buchan and the return to Station status it was decided to refurbish the pitch. In Oct 2004 a contract, worth £40,000 was awarded for the “rejuvenation” of the Astroturf pitch – shame the Unit closed 16 months later.


Four Team Photos
I'm grateful to David Shields, who was a cook on the Station from August 1964 until March 1966, for the first photo which features the successful 1965 team - they won the County Shield in Lerwick. 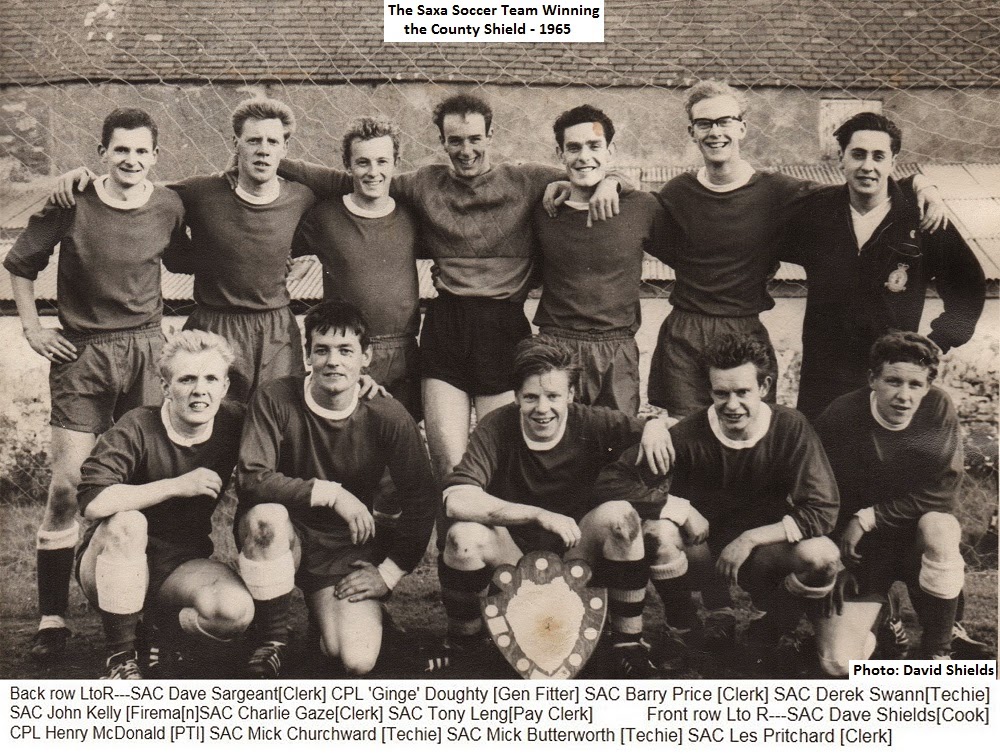 The next is from the 1970 era and I’m grateful to Andy Anderson, who appears in the picture and to Andy Parkinson who was at Saxa 69 -71 for helping identify some of those featured. 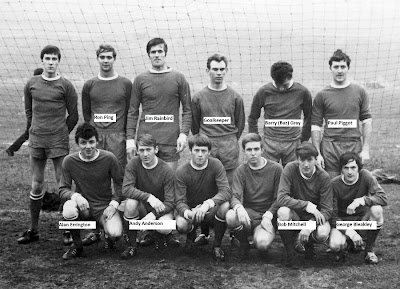 ﻿The second (slightly out of focus) photo comes from my late father-in-laws collection. There is no date but I presume it is an RAF Saxa Team playing an away game at an airfield. 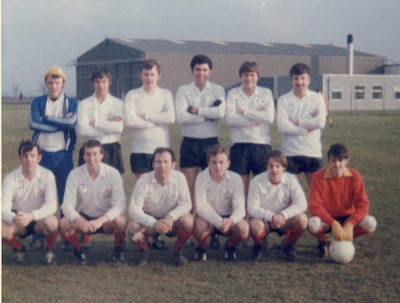 The third photo comes from Frank Josephs and shows the Saxa Team 1986/87.﻿ 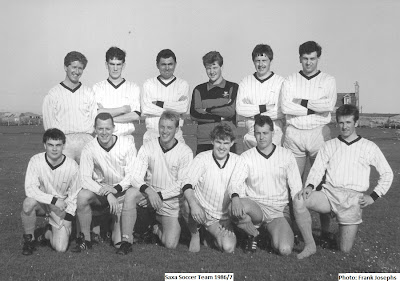 ﻿Help in identifying people in the pictures above would be appreciated.

The final part of this section consists solely of cuttings from the Shetland Times and is probably just of interest to those who were involved with soccer during their time at Saxa. I have attempted to put them in a chronological sequence – but it difficult as some do not have the day & month on them. 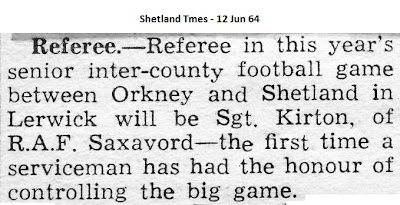 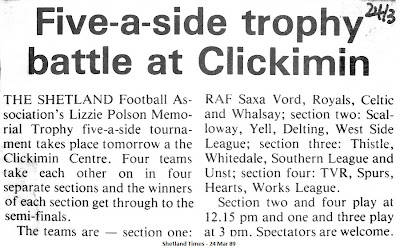 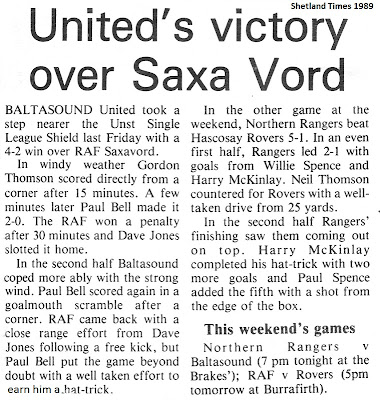 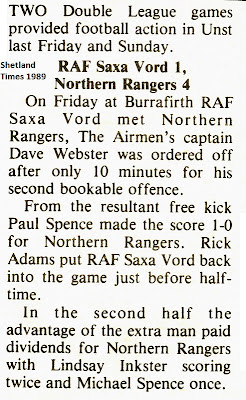 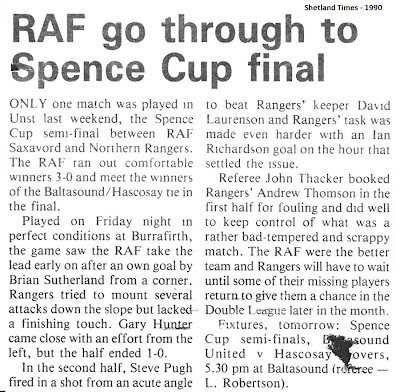 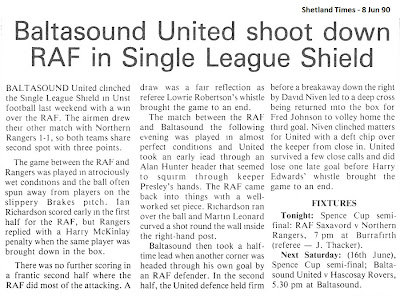 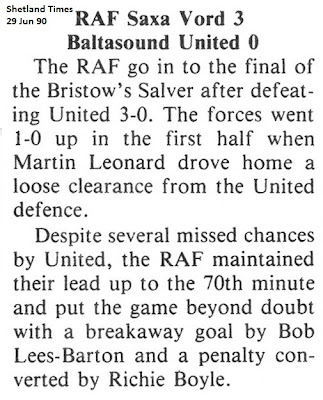 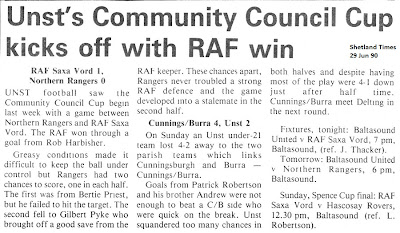 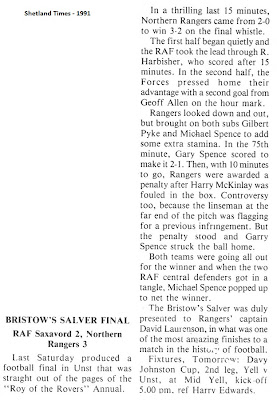 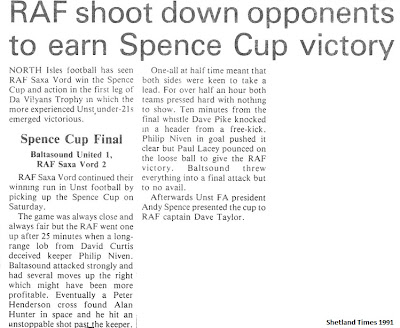 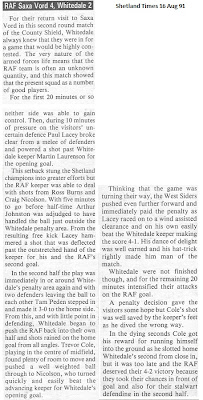